This article appears in the October 18, 2019 issue of Executive Intelligence Review. 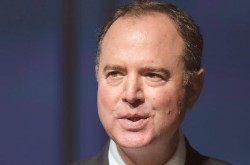 Oct. 9—White House Counsel Pat Cipollone delivered a letter yesterday to House Speaker Nancy Pelosi, Congressman Eliot Engel, Congressman Elijah Cummings, and Congressman (so-called) Adam Schiff. In it, he provides the legal and constitutional basis as to why the White House will not cooperate with the “star chamber” proceeding presently conducted by Schiff and Pelosi. Since the content of the letter has been repeatedly mischaracterized by the media, it is important to quote parts of it with annotations.

Here is the beginning of Cipollone’s letter:

I write on behalf of President Donald J. Trump in response to your numerous, legally unsupported demands made as part of what you have labeled—contrary to the Constitution of the United States and all past bipartisan precedent—as an “impeachment inquiry.” As you know, you have designed and implemented your inquiry in a manner that violates fundamental fairness and constitutionally mandated due process.

For example, you have denied the President the right to cross-examine witnesses; to call witnesses; to receive transcripts of testimony; to have access to evidence; to have counsel present, and many other basic rights guaranteed to all Americans. You have conducted your proceedings in secret. You have violated civil liberties and the separation of powers by threatening Executive Branch officials, claiming that you will seek to punish those who exercise fundamental constitutional rights and prerogatives. All of this violates the Constitution, the rule of law, and every past precedent. Never before in our history has the House of Representatives—under the control of either political party—taken the American people down the dangerous path you seem determined to pursue. 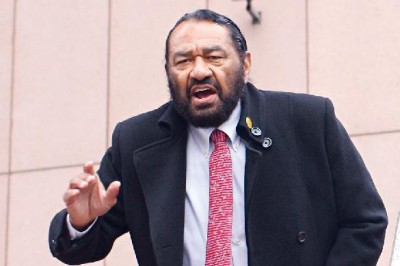 Put simply, you seek to overturn the results of the 2016 election and deprive the American people of the President they have freely chosen. Many Democrats now apparently view impeachment not only as a means to undo the democratic results of the last election, but as a strategy to influence the next election, which is barely more than a year away. As one member of Congress explained, he is “concerned that if we don’t impeach the President, he will get re-elected.” [Cipollone footnote to “Interview with Rep. Al Green, MSNBC (May 5, 2019).”] Your highly partisan and unconstitutional effort threatens grave and lasting damage to our democratic institutions, to our system of free elections, and to the American people. 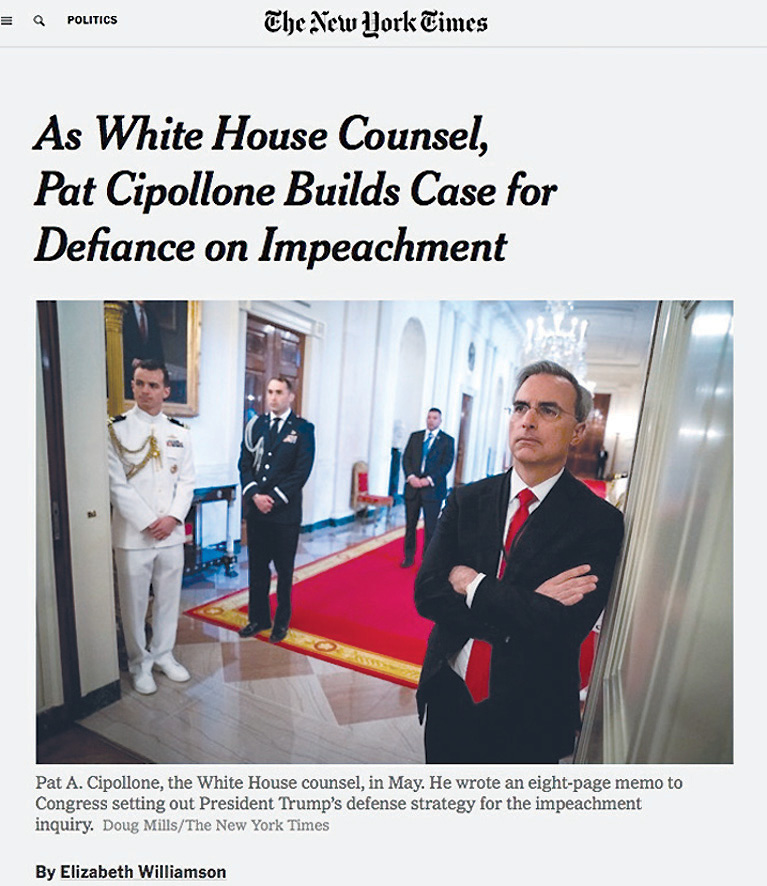 Specifically, the letter notes that President Trump declassified the read-out of his entire July 25 conversation with Ukrainian President Volodymyr Zelensky in order for the public to see that there was nothing wrong with the call (let alone the hyperventilated claims made by the bogus whistleblowers). That is why Rep. Schiff made up a parody of the call and presented it to the American public as fact, while lying about the whistleblower’s contacts with his office prior to filing the complaint.

Schiff’s “parody” has President Trump talking like a mafia don when representing his side of the conversation, in words nowhere close to what the President actually said. Byron York reported last night in the Washington Examiner that the first bogus whistleblower is a Democrat who had a professional relationship with one of the 2020 Democratic candidates for President. The bogus whistleblower claimed that he went to Schiff because the complaint was receiving insufficient attention by the CIA, despite the fact that that agency apparently made a criminal referral to the Justice Department for a possible campaign finance violation. None was found by the Department of Justice (DOJ), as there wasn’t one.

Schiff lied outright that the whistleblower had never been in contact with his office, and the bogus whistleblower never told the Inspector General of the Intelligence Community, Michael Atkinson, about these contacts. Even the Washington Post recognized the gravity of this lie, awarding Schiff four “Pinocchio’s” for it. As previously noted by EIR, Atkinson is a likely coup participant, having migrated to his present position from the National Security Division of the DOJ, which has been at the center of the coup.

The Long Nose of Schiff

In order to accommodate the hearsay complaint of this bogus whistleblower, Atkinson appears to have revamped the procedures for processing such complaints. Atkinson’s confirmation hearing before the Senate Intelligence Community back in January found Sen. Mark Warner and similar miscreants demanding a promise that “whistleblower” provisions be a major priority if his nomination were to pass. We have previously reported that the bogus whistleblower is a client of a law firm that actively solicits intelligence community whistleblowers against Trump, all expenses paid. Real whistleblowers think the whole thing, including the lawyers, stink.

. . . In the history of our nation, the House of Representatives has never attempted to launch an impeachment inquiry against the President without a majority of the House taking political accountability for that decision by voting to authorize such a dramatic constitutional step. Here, House leadership claims to have initiated the gravest inter-branch conflict contemplated under our Constitution by means of nothing more than a press conference, at which the Speaker of the House simply announced an “official impeachment inquiry.” [Cipollone footnote to “Press Release, Nancy Pelosi Announcing Impeachment Inquiry, Sept. 24, 2019.”] Your contrived process is unprecedented in the history of the nation, and lacks the necessary authorization for a valid impeachment proceeding.

Cipollone provides ample constitutional and case law footnotes in support of this position. 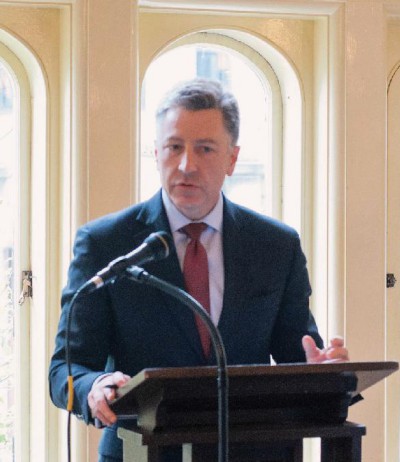 He goes on to document the abuses that have already occurred in these “star chamber” proceedings. Republicans on the Schiff Committee have been denied the right to issue subpoenas for evidence; the proceedings have been conducted in secret, with Democrats leaking cherry-picked portions of testimony to the press; the President is not allowed representation in the proceeding; Republicans on the committee cannot cross-examine witnesses or call witnesseses; and there is no mechanism for disclosing or presenting evidence exculpatory to the President, such as the testimony of former U.S. Special Representative for Ukraine, Kurt Volker, testimony widely viewed as leaving the Democrats’ case in shambles. Further, the Schiff Committee has sent out letters—not subpoenas, letters—informing recipients that failure to respond, often in two days’ time, or an assertion of any privilege, would be considered a criminal obstruction of justice. The Schiff Committee informed State Department Counsel that any assertion of privilege would result in the government salaries of those asserting the privilege being withheld.

The Committee’s assertions on these points amount to nothing more than strong-arm tactics designed to rush proceedings without any regard for due process and the rights of individuals and of the Executive Branch. Threats aimed at intimidating individuals who assert these basic rights are attacks on civil liberties which should profoundly concern all Americans.

Schiff and the Democrats have floated a variety of equally abhorrent schemes in the name of protecting the identity of the so-called whistleblower or whistleblowers. These include having the whistleblowers present testimony in an undisclosed location, in secret, masking them and disguising their voices. The Constitution allows the accused the fundamental right to confront his or her accuser so that whatever story might be told can be impeached. These planned measures violate that due process right. There is rampant speculation in Washington that the reason for this extraordinary gambit is that the actual identity of those making the claims will trace right back to such entities as Fusion GPS, its co-founder Glenn Simpson, and other key figures in the coup itself. The rush to judgment is designed to conceal these origins, inclusive of Schiff’s role as a “fact witness” in how this complaint came to be.

Cipollone ends his letter as follows: