This article appears in the October 25, 2019 issue of Executive Intelligence Review. 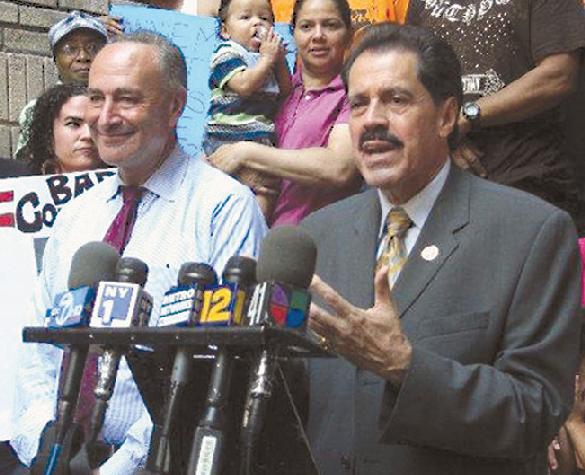 Oct. 21—Democratic Congressman Jose Serrano from the Bronx, New York, stated at the Congressional hearing “on NASA’s Moon Landing Proposal,” October 16, that he will not allow the Trump Administration’s Moon-Mars mission, the Artemis program, to be funded at the level requested and required to get it done. Serrano is Chairman of the Commerce, Justice, Science and Related Agencies Appropriations Subcommittee, which marks up NASA’s budget.

The White House and NASA have, according the subcommittee’s website, “submitted a $1.6 billion budget amendment that intended to start the effort to advance the return of humans to the Moon by four years,” which would accelerate the Artemis program to meet the goal of a human return to the Moon by 2024. The Senate Appropriations Committee has marked up three-quarters of that increase thus far.

NASA had just announced a new leader for human exploration, Doug Loverro, and introduced revolutionary new space suits for the Moon phase of the Moon-Mars mission on October 15.

But Serrano “dismissed” that effort today, according to a report in the Houston Chronicle. He told NASA Administrator Jim Bridenstine at the hearing,

While all of us on this subcommittee would like to send the first woman astronaut into deep space, including to the surface of the Moon, we want to do so in a responsible way—from the perspectives of safety, cost, and likelihood of mission success. . . . I remain extremely concerned about the additional cost to accelerate the mission to the Moon by four years. . . . I believe that it is better to use the original NASA schedule of 2028 in order to have a successful, safe, and cost-effective mission for the benefit of the American people and the world.

However, there has never been a “cost-effective” space mission, nor one “done in a responsible way.” Space missions like the Apollo Program or the new Artemis program are productivity-effective by virtue of the science “driver” they provide for rapid technological innovation, and thus they pay for themselves multiple times, but over a longer time period than their preparation and launch.

As for the “original NASA schedule of 2028,” Serrano’s vanilla “talking points” would take us back to where we were until Trump took office: nowhere. Keith Cowing, editor of the NASA Watch website, is quoted in the Houston Chronicle:

“Here we are, 14 months from (an election) and everyone is doing the classic thing we see here in Washington: It’s time to start either waiting people out until after the election or now is the time to strike and get something in place before change happens. That’s likely one of the reasons Serrano is OK with a 2028 moon mission,” Cowing said, especially since NASA programs backed by the current administration are typically gutted by the incoming president after the election.

But more than this, Serrano is a Democrat committed to President Donald Trump’s impeachment. If he thinks impeachment could succeed, he will want to give the President nothing that could redound to his credit with the American people. 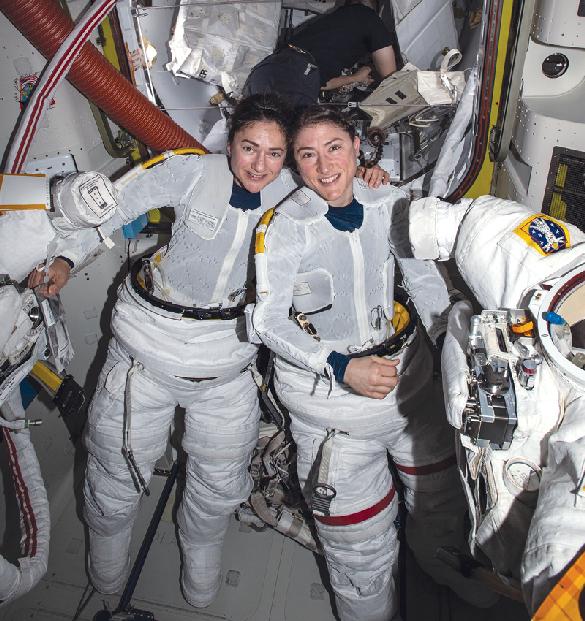 NASA
Astronauts Jessica Meir (left) and Christina Koch prepare for their historic first all-female spacewalk outside the International Space Station on Friday, Oct. 18, 2019. Koch (below) working outside the ISS.
NASA 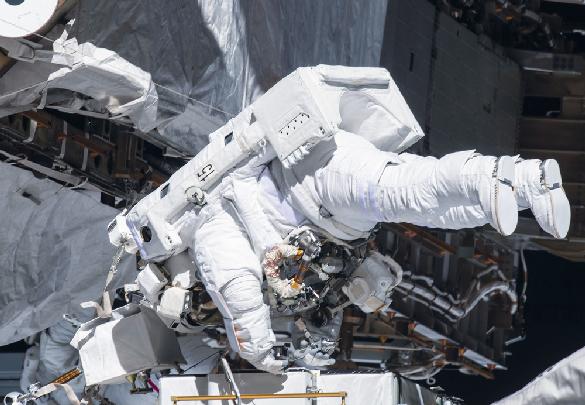 It was the first spacewalk for Meir and the fourth for Koch, who now has spent a total of 27 hours and 48 minutes spacewalking. It is the first spaceflight for both women, who were selected in the 2013 astronaut class that had equal numbers of women and men. Koch will remain in space for an extended duration mission of 11 months to provide researchers the opportunity to observe effects of long-duration spaceflight on a woman to prepare for human missions to the Moon and Mars.

Meir became the 15th woman to spacewalk, and the 14th U.S. woman. It was the 43rd spacewalk to include a woman. Women have been performing spacewalks since 1984, when Russian cosmonaut Svetlana Savitskaya spacewalked in July and NASA astronaut Kathryn Sullivan spacewalked in October. One of the next planned spacewalks will repair a cosmic particle detector. While most of NASA’s accomplishments—so heralded during the JFK-led mission to land the first human being on the Moon—are now being ignored, if not attacked by the major media and much of the Democratic Party, this space walk made headlines.

President Trump, spoke to the two astronauts from the White House during their historic mission, marking the first time since 1969 that an American President has spoken to our astronauts while they were outside their spaceship. During the call, the astronauts praised all the female pioneers who came before them and made this incredible moment possible. “There has been a long line of female scientists, explorers, engineers, and astronauts, and we have followed in their footsteps to get us where we are today,” Dr. Meir said.

We hope that we can provide an inspiration to everybody [who] has a big dream and that is willing to work hard to make that dream come true,” she added. “Something that all of us that have made our way up here have done all throughout our lives. And I can tell you, the hard work certainly did pay off.

President Trump, after the conclusion of the discussion with the two astronauts, stated “This is a first step because we are going to the Moon and then we are launching to Mars. . . . First the moon, then we go to Mars.” NASA Administrator Jim Bridenstine, seated next to the President during the call, further discussed the Moon-Mars mission, and that the Moon is a stepping stone to Mars with, first, the building of a “habitat . . . a space station in orbit around the moon” and then “a sustainable architecture at the Moon, we need to learn how to live and work on another world for long periods of time.” We need that for Mars.