This article appears in the October 25, 2019 issue of Executive Intelligence Review.

In Syria, the Peace Plan Is Underway 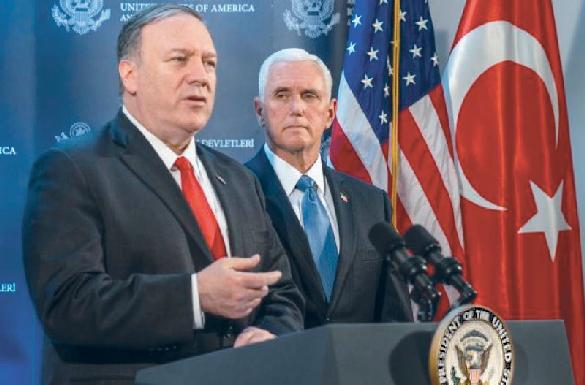 The following article is from the EIR Strategic Alert Weekly Newsletter, Vol. 33, No. 43. The Newsletter, published in four languages in Wiesbaden, Germany, is available at https://abo.eir.de/strategic-alert-service/.

Oct. 21—Developments in Syria, in the two weeks since the announcement of the U.S. troop withdrawal, seem to be following a carefully orchestrated plan, to which only the top political and military leaderships of the United States, Russia, Turkey, and Syria are privy. Everyone else, including politicians and mass media in Europe and the United States, are left guessing, or are otherwise attempting to sabotage these positive developments.

On the military front, the Syrian government forces, known as the Syrian Arab Army (SAA), have been allowed to retake, without any fighting, important border areas and, for the first time since 2012, came in contact with the Syrian-Turkish border in the town of Ain Al-Arab. With the exception of that town, the SAA has been carefully avoiding contact with the Turkish army in areas which are considered part of the Turkish “safe zone” along the border, where Turkey has continued to bomb positions held by the Syrian Democratic Forces (SDF), an insurgent military formation created in 2015. However, after the October 17 agreement between President Recep Tayyip Erdo˘gan and Vice President Pence to enforce a ceasefire, the large-scale operations were stopped. The SAA and withdrawing U.S. troops have also avoided clashes.

It should be stressed that all the reports and hype in the media about the escaping of ISIS prisoners is fake news. In fact, these stories were first spread by the SDF to induce the West to intervene to stop the Turkish incursion. However, many of the prisons in Hasakeh and Qamishli are far from the Turkish military operations zone, and are likely to have come under the control of the Syrian government army. Only one camp for ISIS families in Ain Isa was affected by the fighting between the SDF and Turkish army.

Intensive diplomatic activities are ongoing to secure immediate political discussions to end the crisis in Syria. On October 18, Secretary of State Mike Pompeo visited NATO headquarters in Brussels to give a briefing on the ceasefire agreement in northern Syria. Earlier the same day, he was in Israel to speak personally with Prime Minister Benjamin Netanyahu and assure him of the U.S. commitment to regional security. At the same time, a Russian delegation of Special Representative for Syria Alexander Lavrentiev and Deputy Foreign Minister Sergei Vershinin were in Damascus for top-level meetings, including with President Bashar al-Assad. The two Russians had met the day before with Erdo˘gan’s Presidential Adviser, Ibrahim Kalin, and Deputy Foreign Minister Sedat Önal in Ankara.

On the expiration date of the ceasefire, October 22, President Erdo˘gan and Russian President Vladimir Putin will meet in Sochi. On October 24, NATO defense ministers, including U.S. Defense Secretary Mark Esper, will meet to discuss Syria. Then in Geneva, on October 30, the Syrian Constitutional Committee is set to convene under UN auspices. These talks should pave the way for a final political settlement between the government of Syria and different opposition groups.