This article appears in the November 1, 2019 issue of Executive Intelligence Review. 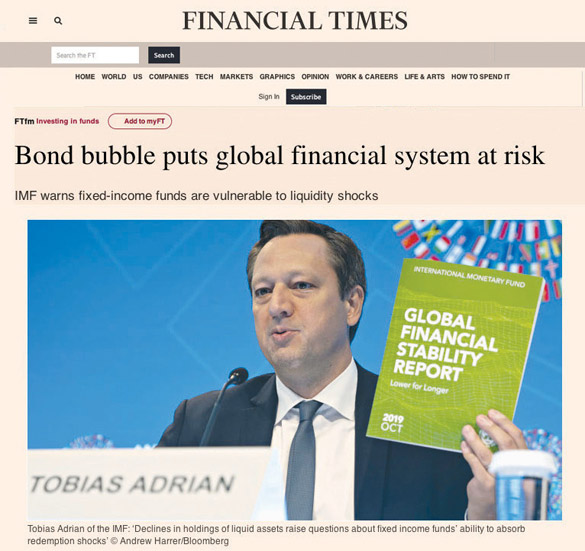 Oct. 26—If you are a senior banking official who attended the IMF/World Bank meetings in Washington last week, you know that the banking system, centered in London and Wall Street, is right now in a worse crisis than anything since the crash of 2008.

The closed circle of U.S. mega-banks suddenly sprang a very large liquidity leak in the middle of September, requiring the Federal Reserve to inject tens of billions of dollars in short-term loans into it every morning since; and the hole is still getting bigger. The IMF itself gave you its report at those meetings; nothing like the usual reassurances—red-light warnings instead were issued about the gigantic corporate debt bubble and bond funds going illiquid. You were warned that the “shadow banks” in India have developed serious problems, threatening India’s commercial banks.

And you’ve become aware of huge protest demonstrations against economic austerity breaking out all over South America, the Mideast, and even parts of Europe. Far-right governments you cheered on, and “economic adjustment” programs you devised, have failed spectacularly; they’ve created local financial blowups in those countries which now are making your own bank crisis worse!

But if you are not such a senior banker, you probably haven’t heard anything about this financial crisis, although it’s right upon us, and may soon be worse than 2007-08. You’ve seen little or nothing about the popular uprisings—except for the one against China in Hong Kong. Impeachment, war and party politics have consumed your news media.

If you have become a reader of publications of Lyndon LaRouche’s movement, however, such as Executive Intelligence Review (EIR), you know that this crisis is underway. You realize the brief industrial and manufacturing recovery in America, during the past two years, has ended and gone into reverse. Here we discuss what we are called on to do, in the face of a crash threatening to be worse than that of 2008.

In what is actually now a financial collapse, already in its opening stages, carrying out Lyndon LaRouche’s economic policies for such a situation are critical. The “overnight bank liquidity crisis” that broke out in mid-September has intensified since then. It shows that the immense bubble of corporate and household debt[fn_1]—securitized by banks, investment firms, hedge funds—is now riddled with assets that are too toxic to borrow against any longer, and those firms are scrounging for liquid cash. The largest “too-big-to-fail” banks now will not lend it to them, so they are demanding it from the Federal Reserve; and it may well be that one or more of those biggest banks is in the same situation and suddenly depending on the Fed to keep it alive. In 2007-08 Citigroup was bankrupt during the entire period in which it was borrowing $2.5 trillion in such Fed loans.

We don’t know who it is now, because the Fed will not reveal the institutions to which it is making tens of billions of dollars of liquidity loans every day. 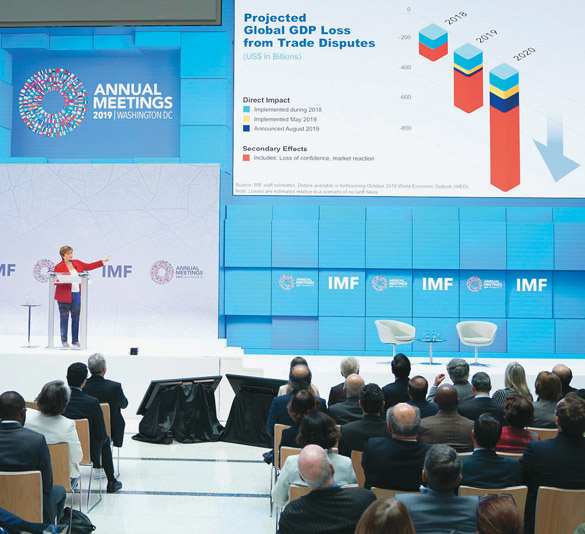 IMF/Stephen Jaffe
IMF Managing Director Kristalina Georgieva projects a collapse in world GDP, one of many results of the current bankrupt financial system, at the 2019 IMF Annual Meeting in Washington, D.C. on October 8, 2019.

But the IMF itself gave a strong suggestion in its Global Financial Stability Report 2019: A large portion of the big bond funds that invest in the $15 trillion bond markets are short of liquidity and cannot pay off their investors. The report added a second alarm: In the oncoming recession, as much as 40-45% of the companies that owe some $19 trillion in corporate debt, won’t be able to even make interest payments. And this problem will quickly spread—by what the financial world calls “contagion.” Mutual funds hold almost $1 trillion of the securities by which the banks have “securitized” this failing corporate debt. Debt-zombie corporations are creating zombie hedge funds and zombie investment firms. The Federal Reserve is injecting more and more liquidity loans every day—$134 billion on Oct. 24 alone, for example—to keep this “everything bubble” of debt from imploding. 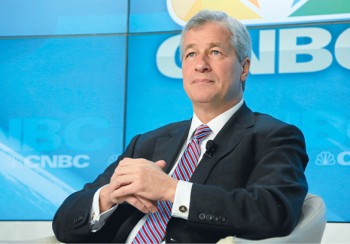 Bankers are making panicked proposals that would have disastrous consequences if they were to be implemented. Jamie Dimon, CEO of Wall Street’s biggest bank, JPMorgan Chase, asserted on Oct. 18 that bank capital regulations were causing the banking system’s sudden liquidity crisis and should all be removed. On Oct. 20, the former head of the Bank of England, Mervyn King, predicted “financial Armageddon” unless the Federal Reserve was given new powers and resources to bail out any bank—or any other financial company—at any time. And most shocking, the current Bank of England head Mark Carney proposed to replace the U.S. dollar in international trade with a global electronic currency controlled by the Bank of England and the other major central banks. These wild proposals smell of the failure of bank policies since the last financial crash, which have brought us to the verge of another.

The only action that will stabilize the banking system and protect it from an otherwise inevitable crash, is action by Congress to restore the Glass-Steagall Act—the first of LaRouche’s “Four Laws to Save the Nation” and the economy. Glass-Steagall must be reimposed now, before a financial blowout hits. Glass-Steagall separates commercial, deposit-and-loan banking from all investment banking and other speculators that securitize and trade debt, multiplying it hundreds of times by derivatives bets. Glass-Steagall protects and insures only commercial banking, and leaves the speculators to sink or swim with no taxpayer backup, explicit or implicit. The immediate effect will be that investment, including the investment of ordinary citizens through pension funds, mutual funds, and 401(k)s, will withdraw from such speculative Wall Street operations, many of which will not survive. But commercial banking will survive to help power an economic recovery.

Lyndon LaRouche announced the banking system was crashing in an international broadcast in July 2007—14 months before Wall Street went belly-up—and immediately put forward Glass-Steagall, combined with a national moratorium on home foreclosures, in legislation called the Homeowners and Bank Protection Act (HBPA). State legislatures all over the country adopted resolutions calling on Congress to act on LaRouche’s proposed legislation. Members of Congress were scared away from introducing it by threats directly from financial speculators, including George Soros, who told them LaRouche’s HBPA would cause a crash. It was not introduced; and that caused the crash. 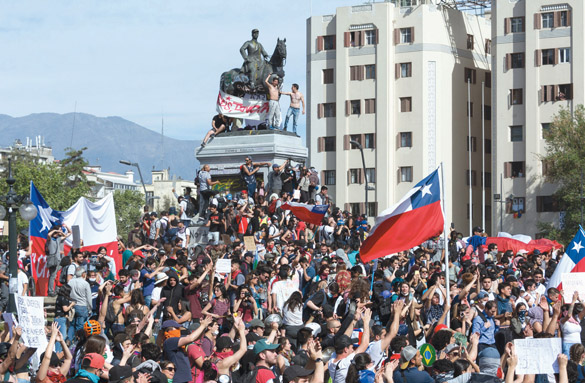 British Warning of Those Mass Protests

Wall Street and London pressure has forced out governments in Argentina, Chile, Ecuador, Brazil, and Italy, which were investing in their economies, and replaced them with governments serving the debt and currency speculators. The disastrous failures of these “free trade” governments have set off mass protests. London now screams that the protests are worsening the financial crisis! The British news agency Reuters on October 24 led with, “An alarming spread of street protests and civil unrest across the world in recent weeks looms large on the radar of financial markets.” Why?

Because those nations may have to respond by stopping the austerity and spending more on services and social security for their own populations. “Forced fiscal loosening in a world already swamped with debt and heading into another downturn may unnerve creditors and bond holders,” Reuters worried. The nervous creditors and bondholders are the same London and Wall Street banks already in trouble.

LaRouche spelled out as his “Second Law,” in 2014, that what is needed for recovery is not primarily more money to spend, but credit issued through national banking. Alexander Hamilton launched the industrial development of the new United States with credit for infrastructure and manufacturing issued by a national bank, even though the new government in 1789 had nothing in the Treasury but debts.

In the United States today, investment in basic economic infrastructure is at a 50-year low; growth of industrial productivity has vanished since 2007; business investment in capital equipment has slowed to a crawl. Less than 10% of American workers produce goods, and many capabilities to recover from a crisis have been lost as of now.[fn_2] At the same time as Glass-Steagall is restored—which will actually subtract much of the speculative “investment” from the economy—“Hamiltonian” national banking institutions will have to be set up by Congress to issue large amounts of credit for high-technology investment, increasing productivity and productive employment. The leading investment category will be new basic economic infrastructure, such as the high-speed transportation corridors—which will include rail, communications, and electric power—now being built on Chinese initiative across Asia into Europe, and into Southeast Asia and the Mideast. 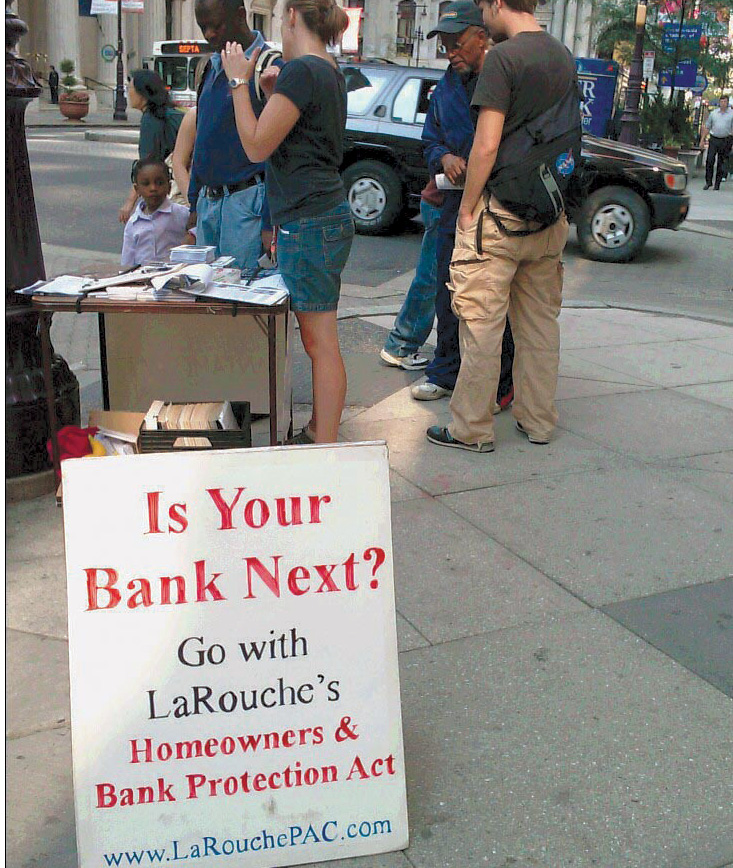 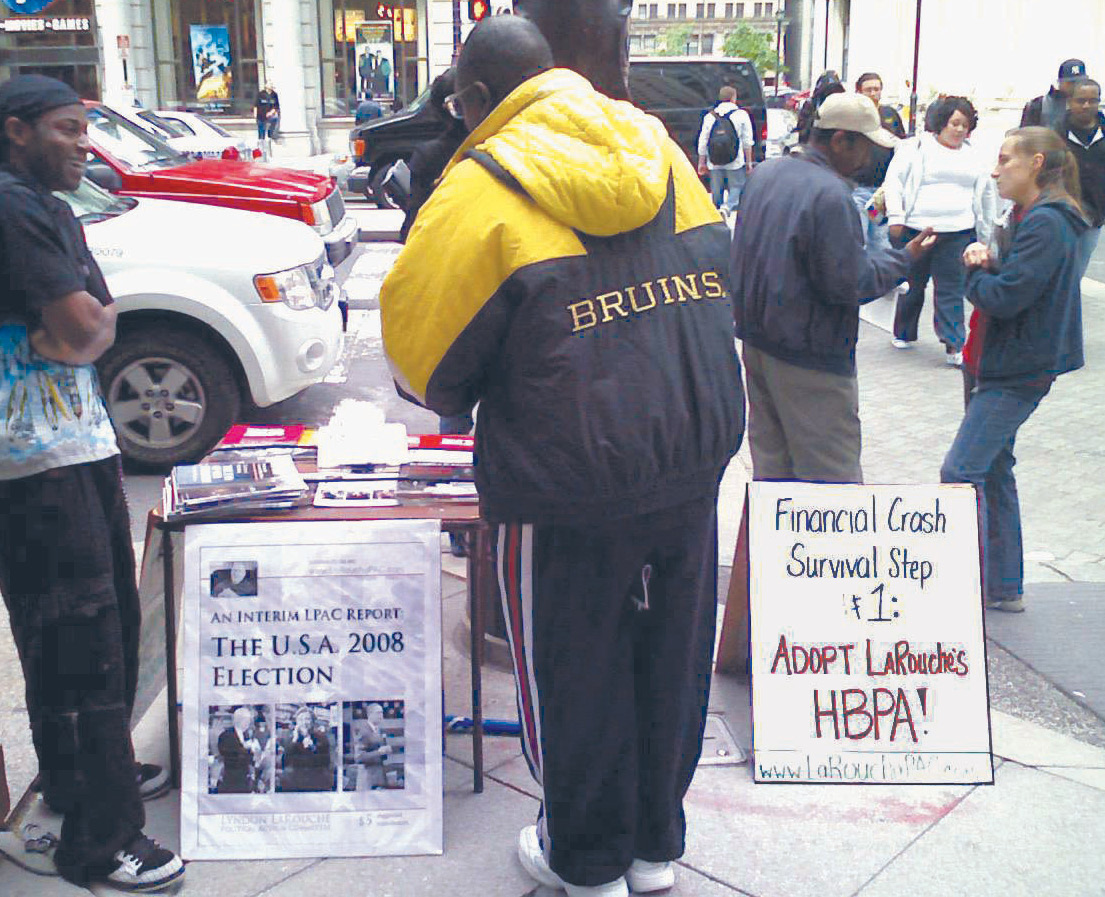 LaRouche’s economics team for EIR had already demonstrated during the 1980-81 deep recession that investment in new, advanced infrastructure is the key to increasing productivity. Increasing real technological productivity is what makes possible powering through even a collapse on Wall Street and relaunching real economic growth.

In this financial crisis, the Federal Reserve’s printing of many trillions of dollars for the “green new deal” of Sen. Bernie Sanders would be just as bad as the Fed printing trillions to throw into the Wall Street banks, as it did from 2007-2015 and is now doing again. Going backward in crucial energy and power technologies will not increase productivity; it will lower it.

LaRouche specified another law: “Science driver” missions must be supported with both credit and spending to lead the recovery. That means the mission to the Moon and Mars re-launched by President Donald Trump, and a crash program to develop fusion power. Like the “Apollo Project” 50 years ago, the Moon-Mars mission will repay the economy five, ten, or perhaps as much as 15 dollars for every dollar put into it. Fusion power breakthroughs will spin off new technologies that will completely redefine resources for Earth-based industry and will provide hyper-fast travel to other planets.

One can not know exactly when this growing financial crisis will turn into a collapse of markets; it is not a simple repetition of the global crash of 2007-08. Then, massive real estate and derivatives speculation suddenly brought down the banks and triggered the so-called “great recession” with mass unemployment and $10 trillion in wealth lost by American households. We see such real estate hyper-speculation hitting banks in some nations now, notably India and Turkey.

The IMF is warning that what it calls the “global slowdown” now underway—industrial recessions, zero productivity growth, and zero trade growth—could be the trigger this time. Ten years of crazy zero interest rates and money printing by central banks have built up unprecedented bubbles of corporate and household debt, which, when economies start contracting, will become masses of non-performing assets for the banks.

In whichever case, the financial breakdown will be sudden, and action must be taken before it happens. Lyndon LaRouche made clear what those actions are to be.

[fn_1]. A series of charts is available at https://realinvestmentadvice.com/how-corporate-debt-confirms-the-everything-bubble/ [back to text for fn_1]