This article appears in the November 1, 2019 issue of Executive Intelligence Review.

Trump and Putin Put SyriaOn the Road to Peace 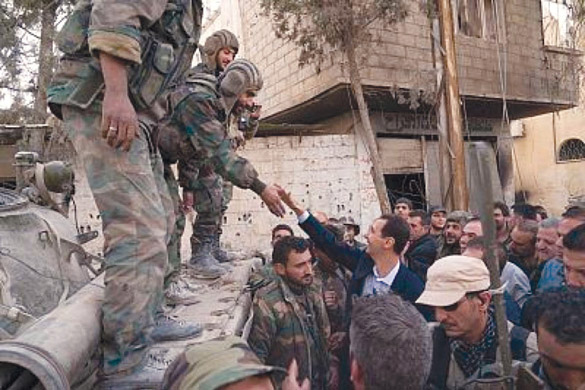 SANA
Syrian President Bashar al-Assad made a rare public appearance as he visited elated troops on the front line in areas newly freed from rebel control in eastern Ghouta, near Damascus, March 19, 2018.

Oct. 26—Seven years ago, on Oct. 28, 2011, American statesman and EIR founder Lyndon LaRouche warned that the murder of Libyan leader Muammar Qadaffi, carried out by Libyan militants with the aid of an American drone about a week earlier, signaled the potential for an early outbreak of more general warfare within Europe, the Mediterranean region, and beyond. The ultimate target of these British-French-U.S. wars in the Mediterranean region and beyond, LaRouche said, was a direct confrontation with Russia. The anti-Russian coup in Ukraine was still more than two years ahead, as was the regime-change war in Syria, an ally of Russia, and the Saudi coalition war on Yemen.

Most notably, this immediate threat has now developed in the setting of the fact, that the present patterns of warfare within Southwest Asia have created a new type of cancerous development, a development which has now replaced the former role which the Balkans once played in the patterns of “world wars” of the Twentieth Century, for the prospective new “world war” of the Twenty-first Century. Like the role of the Balkans in the period of two preceding “World Wars” since the British alliance with Japan in launching those two “World Wars” of the past century, the chronic, and spreading warfare within the chronic cockpit of Southwest Asia, has now reached the condition that, during many recent decades, that region of Asia has superseded the old role of “Balkan Wars” as the now present style of catalyst for a now threatened “Third World War.”

LaRouche did not name Syria in that particular paper, but events and revelations within a year would show that Syria—in the aftermath of the destruction of Libya, led by the UK, the U.S., and France—was indeed the next immediate target of the British and President Barack Obama’s administration. The destruction of Libya was, in fact, the beginning of an alliance between the Obama Administration and a collection of al-Qaeda-Muslim Brotherhood jihadi groups, first overthrowing the Libyan government and then to overthrow the duly elected government of Bashar al-Assad in Syria.

In Syria, the CIA, and then the Pentagon, ran programs to train and arm al-Qaeda factions operating under the Orwellian name of the Free Syrian Army (FSA), to fight against the Assad government. When the Islamic State of Iraq and Syria (ISIS), itself an outgrowth of al-Qaeda in Iraq, first swept out of Iraq and into Syria, the Obama Administration turned to fight it in Syria, but consciously decided to do so by creating its own proxy army in Syria, a deliberate violation of Syrian sovereignty. Though the public policy was to fight ISIS, the ulterior motive of the Obama Administration remained regime change in Damascus.

Obama’s Armies War on One Another

After President Trump canceled the CIA and Pentagon programs to arm the FSA, the FSA’s jihadi factions were given over to the Muslim Brotherhood government of Turkey, and eventually united into the so-called Syrian National Army (SNA). Ankara deployed this now-Turkish proxy army in its interventions in Syria: Operation Euphrates Shield in northern Aleppo province in 2016, Operation Olive Branch in 2018, and then Operation Peace Spring beginning Oct. 9, 2019. Since the Turkish army began its recent incursion into northern Syria, elements of the SNA have been implicated in numerous war crimes, including the murder of a Kurdish political leader and two others who were traveling with her.

These are the same folks who were labeled “moderate rebels” by the Obama team. “This disturbing context was conveniently omitted from the breathless denunciations [of these murders] of U.S. officials and Western pundits,” wrote investigative journalist Max Blumenthal in an Oct. 16 article posted on his Grayzone website.

The real irony is that the Turkish proxy army, which is now attacking the Kurds, and the Kurdish proxy army, which was originally trained and armed to fight ISIS and overthrow Assad, both started life as creations of the Obama Administration. The Obama policy always was regime change in Damascus. This pattern of warfare—using proxy armies to fight regime-change wars—is now being brought to an end in Syria through the collaboration of President Donald Trump and Russian President Vladimir Putin, despite the howls of rage coming from the neo-con war party in Washington and the British Imperialists in London. What has happened since Oct. 6, when President Trump first announced—following a phone discussion with Turkey’s President Erdŏgan—that he was withdrawing U.S. troops from Syria, is that Trump and Putin together have changed the strategic calculus and have opened the door to peace in Syria, after eight years of foreign-supported terrorist warfare against Syria’s government and people.

This followed a number of occasions on which President Trump refused to launch military strikes on Iran, particularly after Iranian air defenses shot down a U.S. reconnaissance drone on June 20, and again after the Sept. 14 drone/cruise missile strikes on oil facilities in Saudi Arabia. The latter were attacks that the U.S. government blamed on Iran but were claimed by the Houthi Ansarullah movement of Yemen, in the context of the Saudi war in their country.

Trump then followed his refusals to launch military strikes with public attacks on the military-industrial complex, directly referring to President Dwight D. Eisenhower’s famous warning in his 1961 farewell address. Syria’s military forces crossed the Euphrates River from Manbij to Tabqa, and then spread across the region from Raqqa, to Hasakah, reaching Qamishli on the Turkish border—reasserting the sovereignty of the duly elected Syrian government.

The corporate media describe the situation in the northeast of Syria—since Turkey’s incursion and Trump’s decision to withdraw—as “chaos and butchery.” They are refusing to report that what Trump and Putin have accomplished with a series of successive agreements between Turkey and Kurdish leaders: Full Syrian sovereignty over nearly one-third of its territory east of the Euphrates River is now being reestablished. In the immediate aftermath of the Turkish incursion into northern Syria on Oct. 9, the insurgent SDF (Syrian Democratic Forces) made a deal with Damascus that allowed Syrian military forces to cross the Euphrates River from Manbij in the north to Tabqa, about 90 km downstream, and spread across the region from Raqqa, northeast to Hasakah, and further northeast to Qamishli on the Turkish border, to begin to reassert the sovereignty of the duly elected Syrian government in that region.

Trump may not be talking directly to Syrian leaders about the extension of Syrian sovereignty, only agreeing with Putin to allow it to happen, but this enables an end to Obama’s seven-and-a-half-year war against Syria. The majority of the “safe zone” that Turkey demanded, an area considerably larger than the 120 km by 32 km zone that Turkish troops now occupy, is actually being patrolled by Syrian border guards with Russian military police, not by Turkish forces. Both Trump and Putin are also calling for Turkey-Syria government negotiations, with Moscow being in a crucial position to help make that happen, even with the hostility that currently characterizes relations between the two governments.

In parallel with this, the Syrian “Constitutional Committee”—an important fruit of the Astana process led by Russia, Turkey and Iran—is moving forward with its first meeting scheduled for Geneva on Oct. 29-30. Despite being denounced and ridiculed in the corporate media, the Astana process is achieving what the UN-led Geneva process could not, a process leading to a political settlement of the Syrian war.