Will the U.S. and Mexico Seal the Border Against Weapons and Drugs? 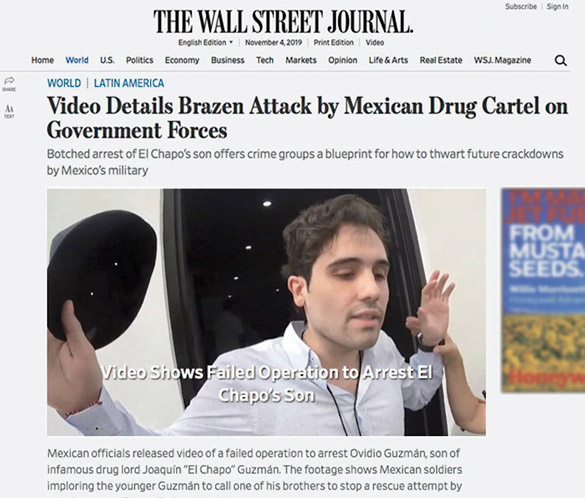 Nov. 2—Drug cartel gunmen struck in Mexico on Oct. 17, taking Culiacán, a city of nearly one million people and the capital of the state of Sinaloa, effectively hostage, and threatening to extend their deadly assault to the entire northwest of the country. It was a strategic attack that continues to shake Mexico.

It would be a deadly mistake to view the cartel assault as a response to a poorly-prepared Mexican government move to arrest a major drug-trafficker. As American statesman Lyndon LaRouche continually stressed, the drug traffic is not the purpose of the enemy; rather, its cartels are an instrument of warfare by the enemy against the people. The guiding enemy, LaRouche warned, is the British Empire, which in today’s world takes the form of international financial power. That imperial power, operating through what LaRouche famously named “Dope, Inc.,” took this opportunity to display its power, but it was an attack waiting to happen, if not in Culiacán, then somewhere else.

Mexico cannot win the war against this international imperial power alone. The government of President Andrés Manuel López Obrador, however, has allies in the United States Presidency and elsewhere internationally. George Soros’s Barack Obama, with his policies of drug legalization and weapons trafficking to the cartels, made infamous in Operation Fast and Furious, is no longer President of the United States.

In the face of this assault, which threatens both nations, President Donald Trump has demonstrated, once again, that he is no instrument of those British imperial interests. His administration has undertaken to support Mexico and the López Obrador government in word and deed.

Trump quickly conferred with López Obrador after the Culiacán assault, and under the personal direction of both presidents, joint action has been decided upon against a key vulnerability of the cartels: the flow of illegal weapons from the United States into Mexico, which provides advanced armaments to the Mexican drug cartels. Government agencies of both countries concur that some 70% of the weapons used by the drug cartel killers in Mexico come from the U.S.—and the majority of them are military grade.

U.S. and Mexican security officials met at the U.S. Embassy in Mexico City on Oct. 21 to set into motion Operation Frozen, a joint security operation whose assigned mission is to shut down that cross-border weapons trafficking to the cartels. The United States and Mexico will together face the common threat that “neither of the countries can face alone,” U.S. Ambassador to Mexico Christopher Landau assured Mexicans.

Media on both sides of the border have either blacked out the news of this agreement, or cynically dismissed it as talk. The same media are likewise blacking out, by and large, the close coordination between Presidents Trump and López Obrador, which set the new agreement in motion, but it is precisely that coordination that gives it teeth.

It is in this context that the LaRouche Citizens’ Movement of Mexico (MOCILA) issued an open letter to President López Obrador identifying the crucial additional elements needed for a successful common victory—including cooperation with China both on stopping fentanyl trafficking and fostering urgently needed economic development in the region—and sent a copy of the letter to President Trump. We publish in this issue that Open Letter, which is already receiving close attention in important policymaking circles on both sides of the border. Given the deliberate media blackout of these immediate developments, the following summary timeline is provided. 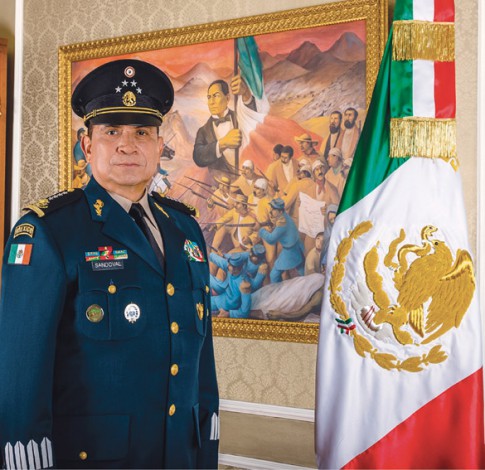 The Attack in Culiacán

On Oct. 17, Mexican military units moved into Culiacán to arrest Ovidio Guzmán, the son of convicted narco kingpin “El Chapo” Guzmán, who already sits in the U.S.’s most secure prison. In his Oct. 30 report to the nation on the Culiacán events, President López Obrador was joined by top officials at the President’s daily morning press conference. Secretary of Defense, Gen. Luis Cresencio Sandoval González, reported that Ovidio is a leading trafficker of methamphetamines and fentanyl into the United States. Fentanyl is extremely lethal, Gen. Sandoval emphasized, and is “the drug that is currently causing the greatest damage to society around the world.”

Ovidio was indicted by a U.S. federal court in April, and in September, the U.S. government requested that Mexico issue a warrant for his arrest and extradition to the United States, under the 1978 U.S.-Mexican extradition treaty. It was the Mexican government security team assigned to track Ovidio down that moved on Oct. 17 to execute that warrant.

Hundreds of heavily armed Sinaloa cartel hitmen descended on the city from across the state within minutes. They concentrated their attack not merely on the military units deployed to capture Ovidio, but seized control over key nodal transport routes in the city, attacked military posts, including on the outskirts of the city, taking military men hostage, and moved into the housing complex where families of the soldiers and officers live.

Cartel gunmen not only took the city effectively hostage, but—Gen. Sandoval reported—threatened that, should the operation against Ovidio go ahead, the cartels would unleash violence in three states neighboring Sinaloa: Sonora, Chihuahua and Durango—a threat, in effect, to drown the entire northwest of the country in blood, much of it along the U.S. border.

Faced with the certainty of huge civilian casualties in a military effort to defeat the cartel paramilitaries at that time and place, the government issued an order to release Ovidio, and withdraw the military forces. The cartel released its hostages, withdrew its immediate forces from the city, and kept much of the weaponry their forces had seized. Ovidio’s arrest warrant has not been cancelled, however, President López Obrador and Gen. Sandoval have stated. 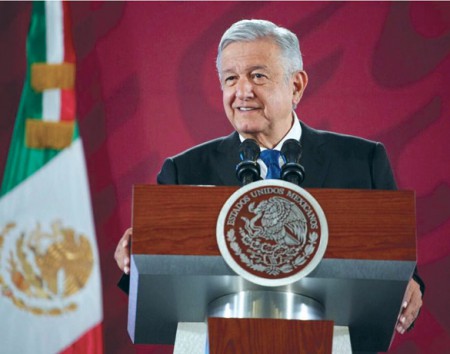 President Trump and Ambassador Landau had a long talk the following day, in which President Trump expressed his support for Mexico, saying that he is “very concerned about the stability of the country. We want a prosperous and stable Mexico, that’s our interest,” the Ambassador reported to a businessmen’s conference a few days later.

The U.S. government went into action. Ambassador Landau tweeted a warning to the cartels and their backers after his call with the President: “I express my full solidarity with Mexico’s security forces, and the support of my government in the fight against transnational organized crime. Good will always defeat evil. Mexico is not alone. Together we will win.”

The two Presidents spoke the following morning, at Trump’s initiative. Mexican Foreign Minister Marcelo Ebrard reported afterwards that in that discussion, López Obrador proposed that the U.S. and Mexico jointly deploy advanced technology to close the borders to the weapons trafficking through which the cartels are armed, after describing to Trump that the narcos had used .50 caliber, armor-piercing rifles in the Culiacán assault. The idea, Ebrard said, “is to install at all border crossings advanced lasers, X-rays, and metal detectors, capable of even detecting chemical products,” thus interdicting both drugs going north across the border as well as arms going south.

That very concept has been a central element of LaRouche’s war plan to defeat the British empire’s Dope, Inc. going back to his 1985 “15-Point War Plan” and most recently detailed in EIR’s March 29, 2019 article, “The LaRouche Plan to ‘Hermetically Seal’ the Border Against Drug-Traffic,” which had circulated widely in Mexico.

President Trump agreed with the idea of “freezing—not reducing, freezing the arms traffic into Mexico,” and thought the idea of deploying technology was a good one, Ebrard reported. They agreed that U.S. and Mexican officials should meet quickly to discuss options. 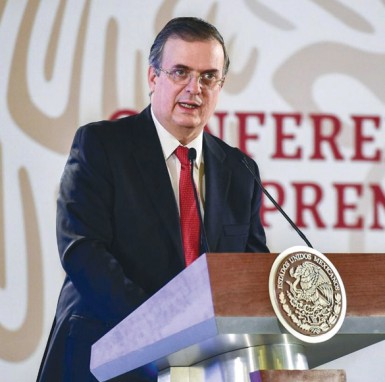 “President Trump called President López Obrador this morning to stress our full support for the fight against organized crime. Let us dedicate our energy to defeating the criminals who threaten us all. Together we can,” Landau tweeted after the call. In another tweet, he wrote that “the illegal flow of arms and money into Mexico—as we saw in Culiacán, are the root of organized crime’s power”; and in another, “Mexico, know that you have a strong ally on this matter in this Embassy!”

The Mexican President, for his part, tweeted his “thanks” to President Trump for his “respect for our sovereignty and his will to maintain a good neighbor policy, based upon cooperation in development and the well-being of our peoples.”

Two days later, “Operation Frozen”—reportedly given that name by U.S. Embassy officials—was set in motion. The participants at the meeting at the U.S. Embassy, which included representatives of the relevant agencies of both countries, agreed to hold executive meetings every 15 days to assess progress, streamline interagency collaboration, “and seal the borders, each country from their own responsibilities and within a sovereign framework,” according to the statement issued by Mexico’s Secretary of Citizen Safety and Protection (SPCC) after the meeting.

“Today Operation Frozen was presented,” the U.S. Embassy tweeted. “U.S. Amb. Landau stressed that the political will exists to confront the shared challenge,” it reported, and provided a link to the SPCC statement.

The situation in Mexico is delicate. People’s understandable fear of the power displayed by the narcos is being fed by a wave of wild speculations, rumors, half-truths, and posturing by frightened politicians flooding the media—independent, pro-government and opposition alike. George Soros’s legalization lobby moved to use the environment of terror created by the cartels to try to ram through its long-standing policy of drug legalization, hoping to do so by Oct. 31. That immediate effort failed, although the government continues to leave the door open to the option. Long-standing Soros henchman Jorge Castañeda opened a new flank against the institutions of Mexico, issuing a call for a national debate on sidelining the Armed Forces from policy-making and operational decision-making.

The national, and international, neoliberal forces that opposed López Obrador’s efforts to reassert Mexico’s sovereignty and economic development, are focusing their fire on the President himself, including implying U.S. support for their attack on the Mexican President. 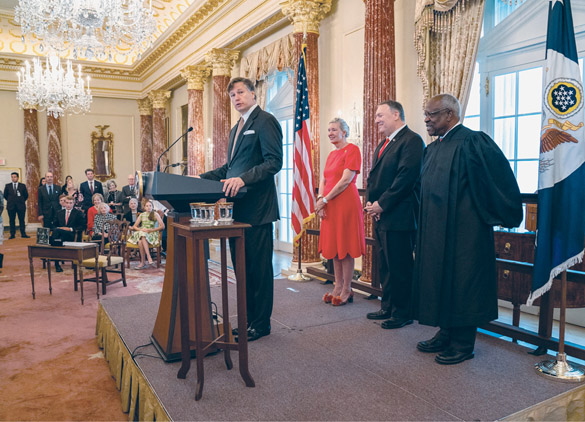 In his Oct. 24 press conference, López Obrador counterattacked, by playing a clip from President Trump’s Sept. 24 speech before the United Nations General Assembly, in which he thanked López Obrador, by name, for “the great cooperation” the United States is receiving from Mexico in the fight against human and drug trafficking. It was an unprecedented action by a Mexican President, and one very zealous of his nation’s sovereignty, which has gone unreported in the United States—and was hardly mentioned in Mexico.

Reporters were hammering the President about comments by a State Department official in the wake of Culiacán that Mexico was not adequately cooperating with the United States in developing an anti-drug strategy. López Obrador asked, in reply, that the video be shown, because the media had effectively blacked out Trump’s comments. He called reporters’ attention in particular to Trump’s statement at the conclusion of the clip, that “Mexico is showing us great respect, and I respect them in return.”

“Fortunately, we have a very good relationship with the government of the United States,” López Obrador stated. “We determine our security policy, as they in a sovereign manner decide their policies. Within this framework, it is understood that there is cooperation on confronting problems that affect our two nations.”