Julian Assange’s Life is at Risk in UK Prison 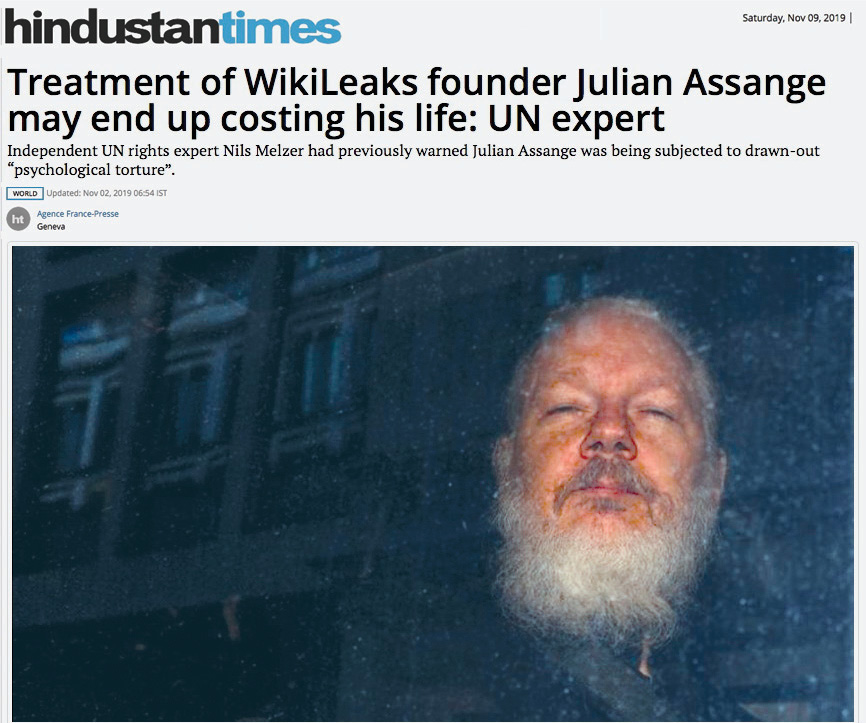 Nov. 5—Killing the witness to a crime is the ultimate obstruction of justice, and now, just that is being perpetrated on British soil in collaboration with U.S. officials. On October 21, a close friend of Julian Assange, former UK Ambassador Craig Murray, reported that Assange is suffering severe mental and physical deterioration after having attended Assange’s extradition hearing in London. On November 1, Nils Melzer, the UN Special Rapporteur, who had last visited Assange in May, issued a special warning based on reports he received.

Julian Assange is the one person alive in possession of the means to quickly put the lie to the entire Russiagate hoax, perpetrated primarily by British intelligence and the British-infiltrated and -controlled elements of the U.S. intelligence community. Assange is the founder of WikiLeaks. He was the recipient of the leaked files from the Democratic National Committee (DNC) and John Podesta, files that former CIA Director John Brennan and friends claim were hacked by the Russians and turned over to WikiLeaks in a scheme to interfere in the 2016 U.S. elections in favor of then Presidential candidate Donald Trump.

The Veteran Intelligence Professionals for Sanity (VIPS) organization has demonstrated forensically that the DNC files were in fact leaked, not hacked over the Internet by the Russians, as claimed by Special Counsel Robert Mueller. The VIPS reported their findings in a Memorandum to the Attorney General on March 13, 2019.

Julian Assange has repeatedly said that he received leaked files and that his receipt of these files did not involve Russian state actors. He offered to provide his evidence to then Congressman Dana Rohrabacher (R-CA) and Rohrabacher shared the offer with President Donald Trump along with Assange’s denial of a Russian source for his documents. The documents detailed Hillary Clinton’s subservience to Wall Street, all sorts of bad deeds by the Clinton Foundation, and the rigging of the 2016 Democratic primaries by the DNC against Bernie Sanders. The truth of these documents has never been contested. Assange also offered to provide his evidence to the U.S. Justice Department, and negotiations were actively underway when the Senate Intelligence Committee apparatchik, Mark Warner (D-VA), blew them up.

Now, Assange is being held in London’s Belmarsh Prison, her Majesty’s hole for the most dangerous criminals in Britain. He was dragged out of the Ecuadorian Embassy in London in April and was being held for jumping bail seven years ago, serving a 50-week sentence that was completed on September 22. He is still in prison pending extradition on the basis of a U.S. indictment charging that he conspired with Chelsea Manning in her release of embarrassing U.S. military documents way, way back in 2010.

The indictment had been in the works since 2017, right after the Assange-Rohrabacher conversations, and was put before a U.S. Grand Jury right after legal hitman Robert Mueller concluded his fabricated campaign against the American President in April 2019. When the indictment was unsealed, Assange was dragged out of the Ecuadorian Embassy in London where he had been granted asylum and hauled off to Belmarsh, pending extradition to the United States. 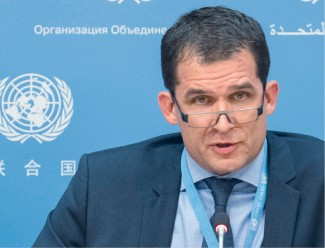 Time to Act is Now

The UN Special Rapporteur on Torture and other Cruel, Inhumane or Degrading Treatment or Punishment, Nils Melzer, issued his harsh warning regarding Assange’s health through the Office of the UN High Commissioner for Human Rights in Geneva. The full statement, “UN expert on torture sounds alarm again that Julian Assange’s life may be at risk,” should be circulated. Melzer warned,

Unless the UK urgently changes course and alleviates his inhumane situation, Mr. Assange’s continued exposure to arbitrariness and abuse may soon end up costing his life.

Melzer had met Assange on May 9, after which he demanded immediate measures to protect Assange’s health and dignity, charging:

Despite the medical urgency of my appeal, and the seriousness of the alleged violations, the UK has not undertaken any measures of investigation, prevention and redress required under international law. [Assange] continues to be detained under oppressive conditions of isolation and surveillance, not justified by his detention status.

While the U.S. Government prosecutes Mr. Assange for publishing information about serious human rights violations, including torture and murder, the officials responsible for these crimes continue to enjoy impunity. Despite the complexity of the proceedings against him led by the world’s most powerful Government, Mr. Assange’s access to legal counsel and documents has been severely obstructed, [effectively undermining] his most fundamental right to prepare his defense.

This call from the UN Special Rapporteur places the responsibility on all UN member states to take action to stop this political atrocity. The people who put this into operation should be fired or prosecuted as part of U.S. Attorney John Durham’s investigation. This is a real test as to whether the U.S. Justice Department can assume any degree of honor. 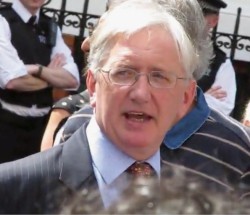 Craig Murray, former British Ambassador to Uzbekistan, attended the court appearance of Assange on Oct. 21 for an extradition hearing. Murray wrote in his blog:

Before I get on to the blatant lack of fair process, the first thing I must note was Julian’s condition. I was badly shocked by just how much weight my friend has lost, by the speed his hair has receded and by the appearance of premature and vastly accelerated aging. He has a pronounced limp I have never seen before. Since his arrest he has lost over 15 kg in weight. But his physical appearance was not as shocking as his mental deterioration. When asked to give his name and date of birth, he struggled visibly over several seconds to recall both.

The hearing, Murray said, had confirmed UN Special Rapporteur Melzer’s earlier warning that Assange was being tortured. Read Murray’s full account of the hearing, on his website, craigmurray.org.uk, which he asked be widely circulated.

Citizens of all nations should speak out in concert with the international campaign being conducted by many organizations to bring the truth about this horrible intelligence crime into the sunlight, and to save Julian Assange’s life.