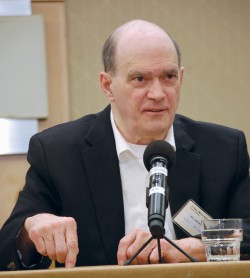 The following is the edited transcript of the remarks by Bill Binney to the LaRouche Fireside Chat on November 7. Subheads have been added. Our readers should know that in 2017, as President Donald Trump was on Air Force One, returning from a meeting with Russian President Vladimir Putin, he was asked about what Putin had or had not done with respect to the 2016 election. Speaking to then Director of the CIA (now Secretary of State) Mike Pompeo, Trump said: “Well, if you want to know what actually happened in this Russiagate business, talk to Bill Binney.” Mr. Binney had been the technical director at the National Security Agency (NSA).

Nov. 7—I want to address the Roger Stone case and what’s going on there. The word I’m getting is that from that case, in the first round of hearings, people are still advocating this Russiagate hack of the Democratic National Committee (DNC), when in fact, I submitted an affidavit in the Roger Stone case saying that it was forensically provable to be a local download and not a hack done internationally.

If you looked at the DNC data posted by WikiLeaks—not the John Podesta material but the DNC material—you could see the forensic properties, that the Last Modified times on all the 35,813 emails posted, all had rounded-off, even-numbered ending modified times. Now, that’s a function of FAT (File Allocation Table) file format transfer protocol onto a storage device like a thumb drive or a CD-ROM. So, as the data transfers, the last time is rounded to the nearest even second. It doesn’t do it in milliseconds. So, what that meant, very simply put, was that it was downloaded to a thumb drive or a CD-ROM, or some physical storage that was transported physically before WikiLeaks posted it. That basically shoots down the entire assertion that it was a hack. It simply is not a hack, OK?

The other matter I addressed in affidavit was the Guccifer 2.0 data. When we looked at the material that Guccifer 2.0 posted, which he said he hacked, the following was very clear. This was given as: here is a file; the name of the file; the character count of that file; and then a time-stamp. Then, the next file, given a name and a character count and a time-stamp, and so on.

So, between the time stamps, were the amount of characters, and therefore we could calculate the transfer rate of every file that he posted. So, we had a range of something like 19 megabytes per second (MB/second) up to 49.1 MB/second. Now, that’s entirely too fast to send across the internet through the web, across the Atlantic to Russia or anywhere else. Even in the United States, it’s too fast. Unless you are on a very closed in, high-speed gigabit network, even multi-gigabit network.

Some people didn’t believe it, so we tried it. We physically tried it. We got somebody here to put a terabyte of data out there, and then we had hackers in Europe going around trying to transfer the data across and see how fast it could come across. We did it from Albania and Serbia and Yugoslavia, a couple of places in Amsterdam, and a data center in London.

The fastest we got was of course from the data center in New Jersey to the data center in London, which only made it slightly less than a quarter of the capacity that was necessary to transfer at the calculated download rate of 49.1 MB/second, the highest rate. So, that clearly showed to us that it could not go across the web.

Let me also say a few things about the current whistleblower, who I don’t call a whistleblower, I call him a rumor-blower, because he’s pushing around rumors and not basic evidence. The basic evidence is in the transcript of the July 25 Trump-Zelensky phone call. If you read that transcript, you have the basic evidence; you don’t need anybody else’s speculation. But that’s all we’re getting from these people, is speculation. Including all the people who are employees of the State Department; these are employees, they do not set policy. The President sets policy by the Constitution. They work for the President, and they’re supposed to implement his policy. They don’t get to set the policy; they get to implement it, period. That’s their job. If they disagree, they should just quit and go work somewhere else. 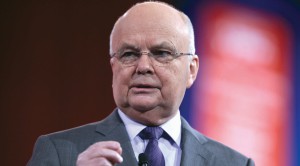 After all, that’s basically what I did at NSA, since I didn’t agree with the violation of the Constitutional rights of everybody in the United States, as Gen. Michael Hayden directed the NSA to do: collect data on everybody in the country. I just got the hell out of there as fast as I could. That’s what you should do if you don’t agree with the policy; then you can argue it outside, in court or wherever.

That’s where I’m arguing it—in court. I’ve got a lawsuit in the 3rd Circuit and the 9th Circuit; I support the Electronic Frontier Foundation (EFF), and I’m supporting the case of Roger Stone, also Gen. Michael Flynn for the same reason. This whole thing was a set-up; this was a farce. They knew it was a fake; it was a fake from the very beginning, it was constructed that way, and they knew it. So, this has all been a charade from the very beginning. 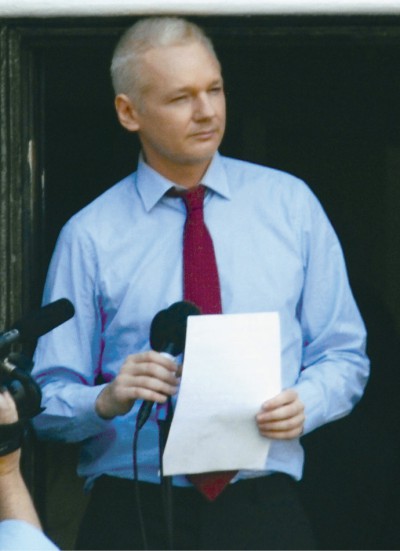 CC/Snapperjack
Julian Assange at the Ecuadorian Embassy in London on August 19, 2012.

After all, since they started in 2010, of all the material that WikiLeaks has posted, what part of it has ever been wrong? It’s always been the truth. It’s one source where you can get the truth. You can’t believe the mainstream media, because they’ve been lying to us and twisting stuff around. Take, for example, they buy into things that Shifty Adam Schiff says, like when he manufactures words for the President, and basically implies to the population of the country that that’s what he said. He’s lying through his teeth. He’s manufacturing the whole thing. That’s the whole charade that’s a continuation of this charade of Russiagate, and so on. It’s simply a continuation of it. It’s the tactic and technique they’re using here, the Democrats.

The one thing we can do, and the only thing we as voters can do, is send a message to the Democrats. Fire as many of them as you can in the next election. That will make it very clear to them that we, the people, do not particularly care for the process that they’re following.