This transcript appears in the November 22, 2019 issue of Executive Intelligence Review. Prof. Siviero is the Chairman of the eCampus University, Italy. We present here an edited and abridged transcript of his presentation on Nov. 16, 2019 at the Schiller Institute Conference, “The Future of Humanity as a Creative Species in the Universe,” in Bad Soden, Germany.

Thank you so much for this kind invitation. This is the second time I have been at a Schiller Institute conference. Years ago I was invited by Claudio Celani, who is my colleague. And my greetings to Helga, who is a fantastic person, whose work makes me proud to be here for that.

Let us start with the most important idea, that Europe and Africa should be like sisters and brothers. The Mediterranean Sea is, in a way, a big lake. It lacks the type of narrow gap through which Europe and Asia have been linked. I will present here, an important project to link Africa to Europe, and from there to Asia. Let us start with the first part of a Mediterranean crossing from Africa, a new fixed link between Sicily and Tunisia. So, Tunisia will be the door both to Italy, and all of Europe, and to Africa. Then we will go the second link, from Italy to Albania. Albania, in that sense, will be the door from Italy—and Europe—to Asia, through Greece, and maybe Turkey, or to the north, the Black Sea.

If you don’t dream, you can’t see the future. If you let your heart speak, you can move beyond almost any obstacle. My dream is to connect Cape Town to Beijing! This is a huge, fantastic idea. Think of Leonardo da Vinci. What was Leonardo, 500 years ago? His was visionary engineering. Without vision, you have no future.

We can build through Africa what I have called a Ulysses corridor, going back to Homer’s stories of Ulysses, also known as Odysseus. We need to take our minds back to these important ancient stories; these are part of our history and tradition. We are because we were; we will be, because we are! Our tradition, our history is our future. We have to always remember this and include all of us. Sometimes we forget China. It is the history of all of us. 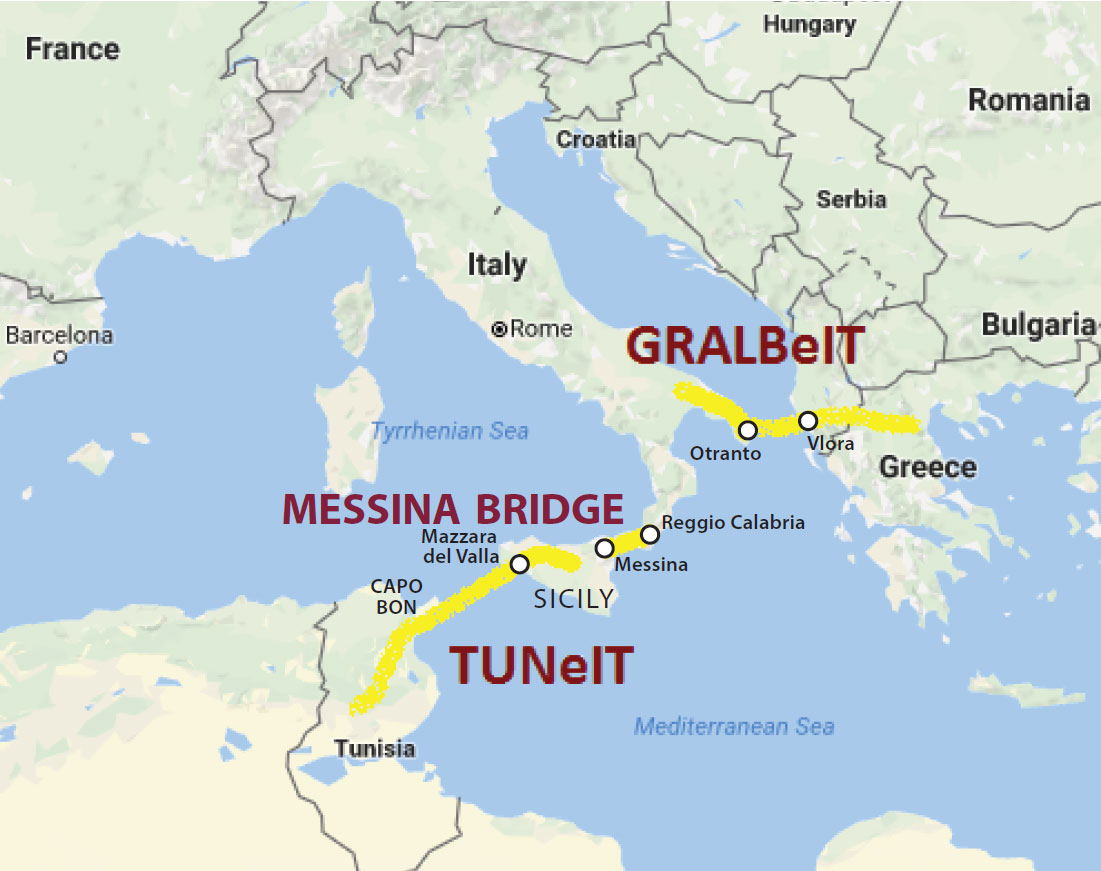 The proposed corridor: TUNEiT, connecting Cap Bon, Tunisia to Mazara del Vallo in Sicily; the Messina Bridge, connecting Messina in the Northeast of Sicily to Reggio Calabria in the “toe” of Italy; and GRALBeIT, connecting Otranto, Italy to Vlora in Albania.

To move from Africa through Europe, let us look at this new corridor. I call it TUNeIT (Tunisia-Italy) and GRALBeIT (Greece-Albania-Italy). The corridor transits through Italy, and let us remember that Magna Graecia was in the south of Italy. There is, perhaps, more Greece in the south of Italy than in Greece itself! Because it was more preserved. The TUNeIT Messina Bridge will do more than simply connecting Messina, on Sicily, and the Reggio Calabria. It brings these great, historic cultures together.

When you think of the full route, from Cape Town, South Africa to Beijing, a problem emerges when you think about crossing the Suez Canal, you find that you must connect through Israel. Some think that such a fixed crossing will be impossible; that there is an impenetrable obstacle, a wall so to speak. Such obstacles are the most important walls. Let us build the bridges and destroy walls. This is our hope, as our Chinese colleague also said. I say, if you find a wall, you have to destroy the wall, and with the same stones, you build a bridge. This is an advanced idea (sometimes I try to be a poet). [applause]

The GRALBeIT is a crossing from Vlora, Albania to Otranto, Italy in the Apulia region of Sicily. This is the shortest crossing between the two countries. There could be another choice. But Apulia is one of the most beautiful regions we have in Italy. Albania is growing and is, perhaps, a part of Europe more than other countries—why not bring Albania even more into Europe? We are in favor. Unfortunately, not all Europe is convinced.

Europe is similarly not yet convinced about the Silk Road. The relationship between the European Union and China is not where it should be. I think bridges should be mainly human bridges, political bridges, from one heart to the other. And smiles, a smile is the door of happiness. If you meet somebody, and they smile, their heart is open; the Sun is coming, they’re happy, and it forms a bridge of flowers. This is my point: Bridge of flowers! [applause]

So, instead of thinking to the next election, please, we must all think a little bit further ahead. In the 1960s, we brought Europe together, with a different mentality than we see today. Now, Europe is worse, why? Because everybody thinks about his particularity, which is a loser. Everybody is losing. This is the reason why I like the Schiller Institute so much, because it opens the mind. The Schiller Institute tries to bring an understanding of that, of moving people beyond their particular thing. There is a lot possible in the future, for everybody! The flow of migrants cannot be solved with wars, cannot be solved by paying somebody to avoid having them come. We have to think about the whole global solution.

And maybe also, this project, this new corridor, could help! We will put thousands and thousands of people to work, and we will connect them.

If a project is impossible, I like it! Sometimes I remember that I’m an engineer, originally. I used to teach bridges to architects. So I became architect honoris causa for my bridges, because I’m a bridge-builder. All my bridges are very nice, not so big, but very nice, mainly human bridges. Let us go back to the idea to connect Sicily and Tunisia. Fourteen years ago, ENEA (Italian National Agency for New Technologies), which is a very important research center, proposed a tunnel from one side to the other, with four intermediate islands. The TUNeIT (Tunisia-Italy link) embodies a poetic idea. [Prof. Siviero used a beautiful set of graphics to take the conference participants from a beautiful portrait a partially veiled woman from the Middle East to the elliptical design of a cross section of the tunnel. He told the audience the following.] Maybe she’s Islamic. Islam is the third step of monotheism. First is Judaism, the second is Christianity, and third is Islam. Why are they not thinking together? It’s difficult—I understand. But the inspiration, the inspiration of these eyes is this one—an ellipse, and from the ellipse, just a cross-section of the tunnel. It’s an invention, but we have to capture the attention of the people. We have to convince them that it is possible to think and dream.

Let’s finish with the Messina Bridge, which is my dream, which has become a nightmare. For political reasons, we, in Italy, decided to cancel the contract! Such a decision is only seen in the history, if people refuse to use their brains. This was just for political reasons. It was a fantastic project, but the politicians cancelled it. My idea, again, dreaming, is to build a skyscraper-height bridge tower, 400 meters high. It will be our Scylla and Charybdis, the lamp of the Mediterranean—Calabria and Sicily could be connected, as it was with Ulysses and Aeneas. Maybe we can connect. I know it’s a dream now, but maybe with the inspiring ideas of Lyndon LaRouche, I really realize that it is not impossible.

So let me close with a discussion of bridges. In Chinese, bridge is pronounced “qiáo.” Ciao, the Italian greeting, which sounds like the Chinese for bridge, is universal, like pizza and spaghetti, like arrivederci. [laughter]

I once saved a bridge, when UNESCO didn’t want the bridge. I solved the impasse, by getting people to look at the historic peninsula of Istanbul—Constantinople in Byzantium—and to really consider interacting with this whole historical tradition. You have to live these things! When I was an architect, I was at the Galata Bridge in Istanbul, and I said, give me a point and I will do the impossible. This is my dream that I would like to share with you. Thank you so much.