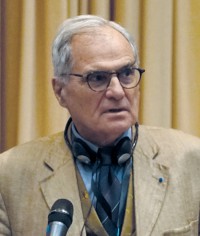 Col. Corvez is an international strategy consultant and former Counsellor for the French Defense and Interior Ministries. We present here his edited remarks as prepared for presentation on Nov. 16, 2019 at the Schiller Institute Conference, “The Future of Humanity as a Creative Species in the Universe” in Bad Soden, Germany.

What used to be called the “equilibrium of terror,” during the times of the confrontation between the two antagonistic ideologies of total laissez-faire capitalism, supported by the USA on the one side, and of communist collectivism, supported by the USSR on the other, collapsed with the dissolution of one of the protagonists of this instable equilibrium, which had dictated that the two imperialisms could not confront each other directly, due to the fear of the mutual destruction that the atomic bomb would inevitably provoke. The capitalist ideology, just as materialist and imperialist as its communist adversary, i.e., deprived of any sentiment of spirituality or transcendence, or even of basic humanism, believed itself to have been designated to a universal destiny that the United States, “an indispensable nation, a new Jerusalem or a new Rome,” had to accomplish for the good of humanity.

That mission became a brutal imperialism, destroying the world by wars, all supposedly based on great principles, and essentially taking place in the “complicated” East where millions of lives and patrimonies were destroyed.

This imperialism increasingly encountered a fierce resistance, which was increasingly efficient, and which thus brought the new President of the United States to the logical conclusion that it was henceforth, in the interest of the USA, to put an end to these endless wars.

However, his businessman-type pragmatism has run up against the ideology of the “American Deep State” that has no intention of giving up the supremacy of the American dollar and of U.S. norms, a refusal resulting in its desperate and destructive attempts, all in bad faith, to impeach the President of the USA for collusion with Russia, and now for what he supposedly did in Ukraine.

Let us hope that these desperate attempts, which subject the first world power to ridicule, will not become more radical, for the sake of humanity and the United States, whose governance is exhibiting catastrophic disorders that impact the world at large, aghast at the incoherence of the American executive.

Hence, the realism of the emerging or reemerging powers of Russia, China, India, Pakistan, Africa, and Latin America, is taking the lead. They defend their interests and regroup in political, economic, and even strategic organizations such as the BRICS (Brazil, Russia, India, China, and South Africa) or the SCO (Shanghai Cooperation Organization), obliging the world to abandon pure ideology and return to the pragmatism of Westphalian nations opposed to the Empires, and defending their pragmatic interests while understanding and respecting those of the others.

It would be wise for Europe to take inspiration from this realism and to abandon a suffocating and paralyzing ideology that makes it impotent and incapable of playing a role in any major crisis and even of defending its own interests. Europe’s incapacity to counter the United States in Iran is a sad example of that, and its submission inside NATO to U.S. norms and command are another one.

Donald Trump’s recent speech at the UN General Assembly is highly significant in this respect, because he defended the various national forms of patriotism and defense of sovereignty heard around the globe, adding that the future belonged to them. Such a statement in favor of patriotism in the world got close to no coverage in the French media under the control of a financial oligarchy opposing these views. However, it indicates that Donald Trump understood the message voiced by the “Yellow Vests” and others acting along the same lines elsewhere, notably those who elected him. As such, his intervention was crucial.

Syrian President Bashar al-Assad wasn’t wrong when he made a brilliant presentation on geopolitics to an international delegation of trade unionists that came to Syria to express their support for Syrian workers on September 10.

The Syrian crisis, he said, assembles all the elements of a world resistance of free and sovereign peoples against the imperialism of a world finance lead by Wall Street, the City of London, and against a Europe which has no way to emancipate itself of this tutorship without a full reset of its fundamentals. As an example, Bashar mentioned French President Macron, who was put in power by this oligarchy and did away with the traditional parties, and can only oppose that oligarchy in words while eventually understanding that those forces who put him in power, are on the verge of ruin.

The popular outcry all over the world are the people’s revolt against the financial oligarchy which is squeezing the lower and middle classes in Europe; for example, the Yellow Vests in France and other such people elsewhere around the planet—most recently in Lebanon.

The workers of all countries are the blood of the nations and, in Syria, despite the war, said Bashar, the social services were maintained and the workers participate in the political deliberations and the management of their activities.

The world map shows the war between financial wealth in the hands of only a tiny minority getting more and more rich, and a vast majority of dispossessed. U.S. military bases are spread over the planet to defend the domination of the dollar, against which nations as Russia and China arise. There is a connection between the conflicts in Syria and in the South China Sea, as Beijing is fully aware.

It is with the perspective to end the conflicts arising from opposite interests, and therefore to end the wars, that the Chinese New Silk Road initiative, also called “One (terrestrial) Belt, One (maritime) Road” (OBOR) is operating.

The aim is to build land and sea infrastructures establishing synergies between the patchy capacities of nations, in natural resources and financial means, by signing agreements where each country will recognize its own interest—a “win-win” solution—each country getting a return proportional to the investment it makes. And, this in all domains of human activity, notably in the area of scientific research, which should allow humanity to develop the indispensable technologies required by human development, on Earth, on the oceans and in space.

His humanist and inventive spirit brought the American Lyndon LaRouche to propose in 1975 a project called “The Oasis Plan,” a plan to manage and develop the water resources of the Middle East to the great benefit of Egypt, as well as Jordan and Syria, Lebanon, Palestine and Israel; proposing that the latter two, united harmoniously by their geographical proximity, mobilize the hydro-resources of the region for great water management projects in the area, such as connecting the Dead Sea with the Red Sea and the Mediterranean, and by creating entirely new resources by the construction of nuclear desalination plants to be installed on both sides, and whose fresh water production was to be shared among all parties. This project, which would have been at the benefit of the entire region and uproot one of the causes of conflict, has been denigrated and finally refused by the forces opposing peace, both in the United States and Israel.

As General de Gaulle said in 1966, in his address at the University of Mexico, unless the world destroys itself in a frightful nuclear holocaust, the future of the world lay there, where man is the final cause to defend, and therefore the cooperation among nations and the aid of the strongest for the weakest:

Indeed, beyond the distances that are shrinking, beyond the ideologies that are weakening, and the political systems that are losing steam, and unless humanity destroys itself some day in a monstrous self-destruction, the fact that will dominate the future is the unity of our universe; One cause, that of man; one necessity, that of world progress, and consequently of assistance to all those countries that desire it in order to develop; one duty, that of peace; these constitute the very basis of existence for our species.