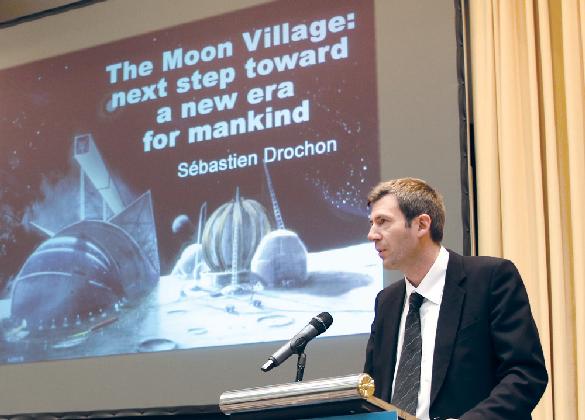 Sébastien Drochon is Space Policy Director for the French Schiller Institute. We present here his edited remarks as prepared for presentation on Nov. 16, 2019 at the Schiller Institute Conference, “The Future of Humanity as a Creative Species in the Universe” in Bad Soden, Germany.

Why the Moon Village?

It’s really funny when we realize that the beautiful old Chinese concept of tianxia, which means, literally, “everything located under the sky,” and which foreshadows the necessary existence of a harmonious unity between all the distinct and sometimes opposite entities evolving “under the sky,” on Earth,—this tianxia, then, will only become possible by pushing humanity above the sky, through an ambitious international space program that will unify all the nations toward a common goal.

Maybe it’s because the sky has considerably expanded since. We now know that our universe contains more than 2 trillion galaxies, each of them having at least hundreds of billions of stars. So far, we have discovered more than 4,000 exoplanets in our own galaxy, and we are pretty sure that there could be as many as there are stars.

So, our universe is showing us new worlds. New, fascinating future discoveries await us, provided we mobilize our resources to achieve them.

The Chinese lunar program is going forward with great success and has awakened the USA, which just decided to go back to the Moon with the Artemis program. Other nations such as Japan, India, Russia, and the nations of the European Space Agency are now aiming at the Moon for their future missions.

In Europe, the head of the European Space Agency, Jan Wörner, declared in October 2015 that he wanted to build a permanent human or robotic base on the Moon with the help of international cooperation. That’s where the concept of the Moon Village came from.

If we think about the Moon Village as a long-term objective and as a unified concept aiming at bringing all nations together, with the support of private industries and laboratories, all seeking to globally harmonize existing resources and achieve longer-term goals of industrialization and scientific researches on the Moon—and provided we definitively stop all kinds of austerity regarding those projects—we can be sure that we’ll succeed in creating a new Renaissance based on sharing scientific and technological progress for all, on Earth and beyond. 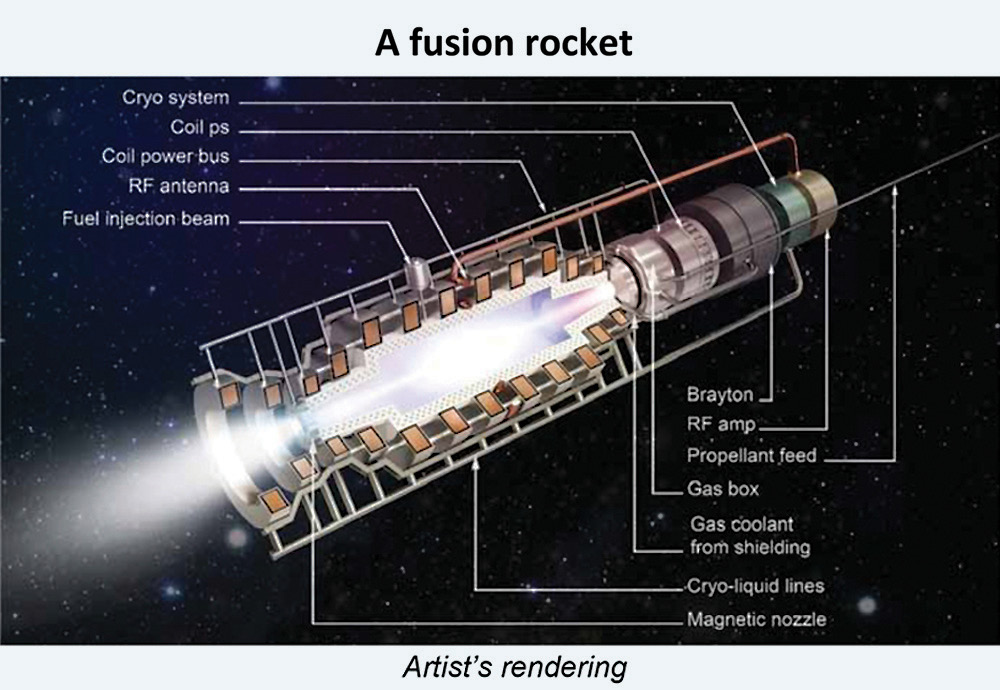 What do we need to make it happen?

Now, this new paradigm of a permanent human settlement on the Moon and, much later, on Mars, will be possible if we succeed in mastering thermonuclear fusion energy.

Why is it so crucial for a durable settlement of the human species on the Moon and beyond? Because that’s the technology that will give us the biggest increase of energy-flux density in all the processes implied in space exploration, both in rocket propulsion and in energy production. Thermonuclear fusion will enable us to produce clean and abundant power.

That has always been key in every space mission. In space, each moved kilogram of material, or each minute spent to maintain human life in space, necessitates much more energy and power than we would need on Earth for the same purpose.

Take Mars for example. It takes almost 6 to 9 months to get there by the classical mode of propulsion. And for somebody who would like to do a back and forth, it would mean at least a two-year trip in a space environment that we know would be deadly for any human being.

With fusion technology introduced into our space modes of propulsion, we theoretically would have new rockets that would contain the equivalent of millions of classical chemistry propulsion rockets. That gives you an idea of what “density” means. We could use this huge amount of power not in one shot but gradually, in order to get constant acceleration and reach speeds that we couldn’t reach otherwise. With that kind of rocket, we could go to Mars with a constant acceleration and deceleration of one Earth gravity [1g] in a few days.

In the United States, the Satellite Systems division of the Princeton Plasma Physics Laboratory has been working for several years on a Direct Fusion Drive (DFD) engine. Such a reactor would produce a substantial boost by ejection of particles resulting from a fusion reaction. Although NASA showed some interest in this research, its lack of funding has slowed down the potential advances in this promising sector.

Some will shout at me and say, “That’s impossible! All you’re talking about is nothing but a utopia. What you say will never happen! That’s money thrown out the window!”

Well, first of all, it wouldn’t make any sense if, once mastered, fusion technology were to be used only on space activity. The reason why we go there and take on the challenge to live there, is to give humanity back on Earth the means to definitely get rid of poverty and diseases, to end wars and to solve all the environmental problems. The purpose is to giving each human being enough power to develop, live worthily, and be able to exert his creativity for the common good.

The purpose of going into space is not to flee the problems on Earth, but to deal with them. We do not go there “because it’s easy, but because it’s hard,” and it’s the difficulty of getting there that drives us to go beyond.

Secondly, those who always say that fusion will always be unreachable are certainly not aware of the existence of several studies done in the USA, dating back to the 1970s, that showed that controlled thermonuclear fusion was quite achievable in fifteen or thirty years, provided we allocate enough investments for that. However, since these studies were published, investments in this field have always been below the level required to obtain complete control of the technology.

So yes, with the current level of funding, we’ll never get it. This is why we need a crash program on a far grander scale than our current programs. This is essential to get this technology under control as quickly as possible.

Nevertheless, we can be optimistic. As a French citizen, I am pleased to announce that a new breakthrough in this area has just been achieved by the Commissariat for Atomic Energy using the Laser Mégajoule (LMJ) in Bordeaux, France. Here, fusion has been produced, not by magnetic confinement in those big donuts we call tokamaks, but by inertial confinement, using powerful lasers to heat and compress a mixture of fusion fuels contained in a microcapsule for the purpose of inducing nuclear fusion reactions.

According to an internal document of the Atomic Energy Commissariat, a very successful demonstration took place on October 11, when the organized light beams of 48 giant lasers imploded a micro-balloon of fusion fuel, causing a fusion reaction manifested by producing 100 billion neutrons. Targeting, measuring, etc., everything went as planned and calculated.

Now, I would like you to think about what it means to have a fusion reaction of that kind generated on Earth.

For billions of years the Sun has continuously produced fusion reactions. That’s the way it’s burning its own internal fuel. But now, somewhere in the Solar system, on Earth, the universe produced controlled thermonuclear fusion through a creatively willing creature called a human being. You have to understand. It’s not just a question of energy here. What we have done, here, is add a new power to the universe. Or, we rather could say that the universe has added a new power to itself, through us, and gave itself a new potential to change.

It gives you a foretaste of the way we should consider the universe and its relationship with human beings. Our universe is actually creative because it embedded human creativity into its own processes of change. That’s a beautiful idea that should give us a sense of why space exploration is not just a human caprice but a way to accelerate the rate of creative output the universe is supposed to potentially produce, through human creativity. That’s the proper way to look at space exploration in the future. Each time we decide to go or look further and further into space, the universe pulls humanity toward new knowledge and, consequently, changes the universe as a whole.

Now, it brings us to what is certainly the most important question. What does space exploration really mean for us?

We are all sovereign individuals, all unique in the sense that we all have our own personality and creativity. But our behavior, our sensibility, our thoughts can’t be totally separated from the society we live in. If our society has lost its purpose, its noble goals and has developed bad habits—such as wasting time watching stupid videos on the internet, for example—or has become globally pessimistic about the future of humanity and human nature, then, whatever we do, our mind and our creativity will be affected.

But if we fight to get society, and more broadly, humanity, back to its feet, if mankind sticks to a mission that will permit future generations to always discover the physical principles that allow us to live better, then, each individual will find a real motivation to leave something beautiful for those future generations and, for that, will exert his or her genuine creativity.

Creativity is not a magic trick that occurs to people arbitrarily. Creativity does not work through irrational outbursts, as most romantics would think it does. Creativity is exerted through a specific type of impassioned emotion. Creativity works its way via the beautiful conviction that you’re participating in history for the betterment of all humanity and of future generations, when you have a purpose in life that goes beyond your own life.

And that’s the reason space exploration is so important. That’s why a mission-oriented society looking at its own future in space is key to building this new paradigm of peaceful development.

On this note, I want to conclude by quoting Lyndon LaRouche. Here’s what he says in a paper he wrote in 1985, “Private Initiative for Colonizing the Moon and Mars”:

The essence of science is such passion, such task-orientation. . . . Herein lies not only the passion indispensable to creative-scientific fruitfulness; herein lies the capacity of the layman, as factory operative, or other, to assimilate scientific progress efficiently, creatively.

It is such so-impassioned “task-orientation,” . . . which is the wellspring of great upsurges of scientific creativity, and upsurges of the enlarged capacity of populations for “imparting and receiving profound and impassioned conceptions respecting man and nature.”

The “Extraterrestrial Imperative” excites the professional popular view of scientific progress as perhaps no other foreseeable choice of mission-assignment might do this. If we wish the highest rate of productivity in laboratories and in production, these benefits will be supplied as by-products of an impassioned commitment to master all of the tasks of the Moon-Mars mission-assignment.

So, we need a goal. This goal should be this Moon-Mars mission-assignment of which the Moon Village project is a part.

There lies the way through the concept of tianxia.

This is the purpose we have to fight for.