A CALL TO THE U.S. PRESIDENT

Helga Zepp-LaRouche addressed the concluding session of the November 16-17 Schiller Institute conference in Bad Soden, Germany, “The Future of Humanity as a Creative Species in the Universe,” to ask those gathered to support a resolution to exonerate her late husband, Lyndon LaRouche. The 300 conference participants supported the resolution, which follows after her remarks here, by acclamation.

As you have probably realized over the last two days, if not earlier, the difference between the slanders against Lyndon LaRouche, and who he really was and is, is beyond enormous. There is not one slander in the world that I can think of that has not been thrown against him. He has been called everything from KGB, CIA, Vatican agent, anti-Semitic, racist, youth cult leader—when Lyn became older than 90, they stopped saying that one, because it became sort of obvious that this was not the case.

Wilhelm von Humboldt, when he talked about Schiller after he had passed away, discussed the effect Schiller had had in terms of not only his writings, but also of the many personal discussions with him and how he touched other people’s lives. He said the real significance of Schiller was that totality; it was not just the writings, it was the many people he inspired and transformed through personal contact.

I have spent much time with Lyn during the better part of the last 46 years. We travelled to Peru, to Brazil, to Mexico, to Sudan; I think it was altogether about 40 countries, many of them many times, such as Italy. Also we went to many states in the United States; in the Presidential campaigns we normally would go to almost all 50 states. In the course of this, Lyn met so many human beings. If you look at some of the older videos, you see halls full of young people listening to him, absolutely mesmerized by the words of this great man.

We are up against a large enemy, and the mass media who declared Lyndon LaRouche persona non grata. For this reason, in 1995, we convened a great Commission of Inquiry concerning, among other issues, the LaRouche legal case. Theo Mitchell was present, and also Jozef MikloŠko. This Commission was conducted because it was realized that the LaRouche case was exactly like the prosecutions of hundreds of elected officials of the United States, state legislators—especially black people, African-Americans. They therefore declared LaRouche an honorary Frühmensch, something Lyn accepted with absolute pride, and took as his Badge of Honor.

If, after having participated in this conference, you agree that it is a question of absolute historic necessity that the name of Lyndon LaRouche be cleared, I ask you to support by acclamation of this conference, a resolution that we will formulate as an appeal to President Trump to immediately grant pardon or exoneration to Lyn. His work will stand on its own. But as I said at the Commission of Inquiry in 1995, the criminals cannot be allowed to continue to commit such crimes. The crimes, then, were committed by the same forces who are now making the coup against President Trump, who covered up 9/11, and who prosecuted Lyn. These are all the same forces.

The crime these people committed was not just that my husband, and innocent man, went to jail, as did a number of his colleagues; one of them, Dennis Small, is sitting right here on this podium. The real crime was that by slandering him and prosecuting him in this way, they prevented so many people in the United States and around the world from having unprejudiced access to the great ideas of my husband.

I’m absolutely convinced—you may agree with me or not—that Lyn was the greatest individual of his time. Together, we have met many great people; we met with Indira Gandhi, we met about 40 heads of state and many other exceptional individuals of many, many countries. But Lyn was a towering giant. And I, personally, I’m absolutely convinced that it is an historical necessity that his name be cleared, so that the many young generations to come, and those living right now, have unrestrained access to his ideas, because, for our own humanity, this is absolutely necessary.

Resolution to Exonerate LaRoucheIn the Name of Justice for Mankind

In unique moments of history, a single decisive action can evoke justice for an entire era, for all nations. The universal poet of freedom, Friedrich Schiller, in his masterpiece Don Carlos, had the Marquis of Posa urge King Philip to “become among a million kings, a king,” and bring justice to the Netherlands and all Europe.

President Trump, the time has come to posthumously exonerate Lyndon H. LaRouche, who was railroaded and unjustly incarcerated from 1989 to 1994. This is needed both to bring justice for the man, and justice for his ideas. Each and all of our nations, especially our future generations, need unfettered access to his unique discoveries in physical economy; to his contributions to classical culture and physical science; to his policies for great infrastructure projects and economic development—access that can only come from ending the decades of slanders and vilification, which only exoneration can provide.

The great, existential crises facing our nations and the world, and the unique contributions which the ideas of LaRouche can make to their solution, bestir us to call for the urgent exoneration of Lyndon LaRouche. 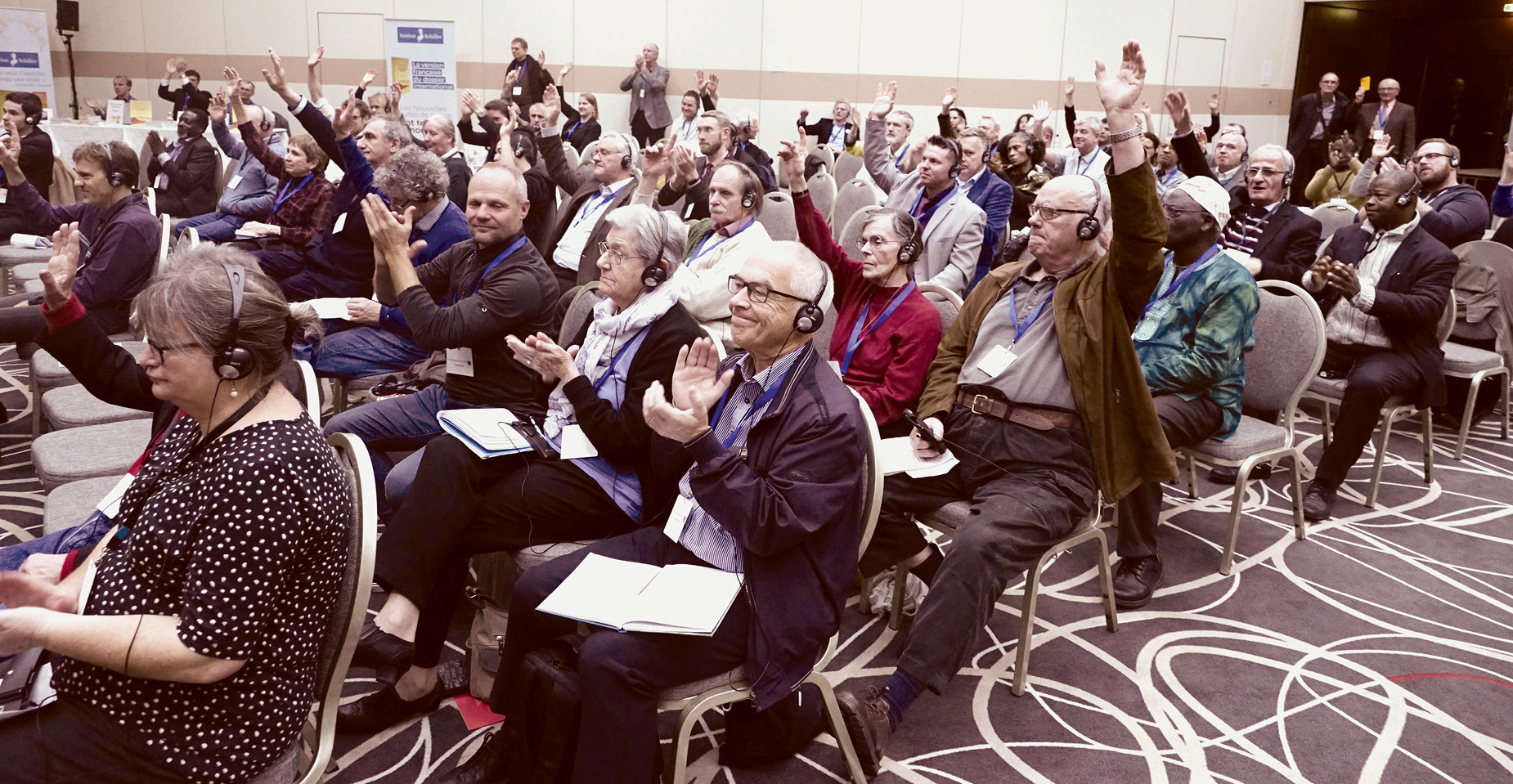 EIRNS/Chris Lewis
The Schiller Institute’s November 16-17 conference in Bad Soden, Germany concludes with enthusiastic support for Helga Zepp-LaRouche’s proposal for a resolution to be presented to President Trump to exonerate Lyndon LaRouche.