Dec. 7—During the second day of the “climate emergency” extravaganza in Madrid, Spain, the UN Climate Change Conference known as COP25, the Secretary General of the United Nations singled out the four nations that he claimed were endangering the planet by their energy technologies. Antonio Guterres named the United States, China, Russia and India as, in effect, the targets of the global green new deal he was pushing at the COP25 meeting and called on “Europe” to take these powers on and “correct” them. The previous day, the European Union’s European Commission had “declared a climate emergency.” 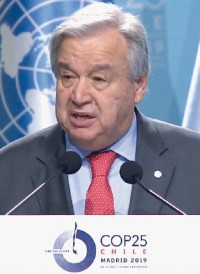 On December 2, the opening day of the Madrid meeting, Guterres delivered the now-familiar litany of climate disasters identified by multiple computer models and called the response “utterly inadequate” from the nations he excoriated as the major “emitters” of carbon dioxide. On December 3, he made clear that he meant the four major powers whose development of nuclear, coal, and gas-powered technologies and industries—as well as space exploration—have the greatest economic potential. Guterres said:

I’m convinced that Europe will be in a position to negotiate with China, with India, with the United States, with Russia in a way that will allow all to understand that this must be a collective effort and that they all will have to correct their policies in order to be able to drastically reduce the emissions.

For either the UN or “Europe” to “correct” the opposition to a global green new deal on the part of these four powers (even if they could do so) would be a disaster for the human race. Beginning 1995, these four powers were identified repeatedly by Lyndon LaRouche as uniquely qualified to launch a long-overdue New Bretton Woods credit and monetary system. They could replace the hyper-speculative floating-exchange-rate monetary system of London and Wall Street which has ruled since the early 1970s. That floating casino system has forced deindustrialization in developed countries and the looting of developing countries and caused repeated financial crashes and deep recessions.

The fact that the United States, Russia, China and India are spacefaring, nuclear-power countries leading in advanced technologies, is amplified by the active opposition of their presidents’ policies to those of the so-called global green new deal. President Donald Trump’s opposition is most forcefully public, but that of Presidents Xi, Modi and Putin is no less real in action.

China, for example, has already carried out the emissions-reduction pledges it made at the 2015 Paris Climate Conference, but it has done so the high-technology way, with more nuclear power and more hydropower—much more than the solar and wind farms for which it is known. And now it has resumed coal-power plant construction on a fairly large scale, with new clean-coal technologies. The UN and European Union regard this as a disastrous development—but in fact, the provision of electricity for hundreds of millions of human beings in Africa and elsewhere who lack it, absolutely depends on both advanced nuclear power and coal powered technologies.

Disputes among these four powers, and particularly the British Intelligence-led targeting of all their leaders for hate propaganda and attempted “regime change,” has held them back from taking common steps to create a new credit system so far. LaRouche’s New Bretton Woods proposal is circulating among them at this moment, and the clear onset of yet another financial crash of the Wall Street/London system could propel them to act.

Their potential New Bretton Woods system, based on LaRouche’s proposal, would launch a new paradigm of greater prosperity and scientific progress for the world as a whole. Meanwhile the anti-population, global green new deal should continue to be thoroughly rejected. 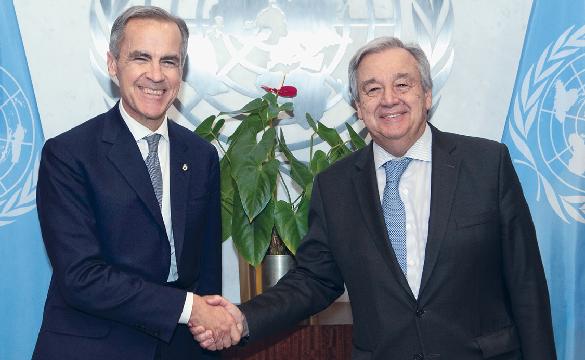 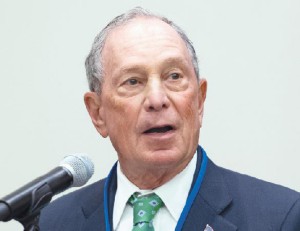 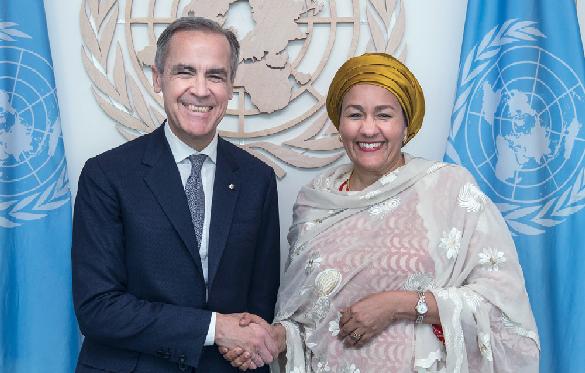 At the COP25 depopulation affair, Guterres also made the Governor of the Bank of England, Mark Carney, the UN’s Climate Change Ambassador, announcing this December 2. Thus top Wall Street and City of London financial figures continue to be made UN officials charged with shutting down coal and other fossil fuel power sources and industries. Their mission is to use financing cut-offs to force deindustrialization. The UN Climate Change Ambassador in 2019 has been Wall Street billionaire Michael Bloomberg. He lives in London but is now spending hundreds of millions on his own “U.S. presidential campaign,” whose purpose is anti-Trump advertising and propaganda. Carney and Bloomberg together run the Task Force on Climate-Related Financial Disclosures, the gang of European central bankers and private banks and funds working to “risk off” fossil fuel industries and stop investment in them.

Carney adds an extra objective that is both anti-U.S, and anti-economic development. He announced at the August 2019 bankers’ conference in Jackson Hole, Wyoming that the dollar should be eliminated as an international trade reserve currency and replaced by a digital world currency controlled by the central banks. Carney, head of the Bank of England for the past six years, is also a full-blown “climate emergency” fanatic, reportedly made so by Diana, his “climate risk expert” wife. 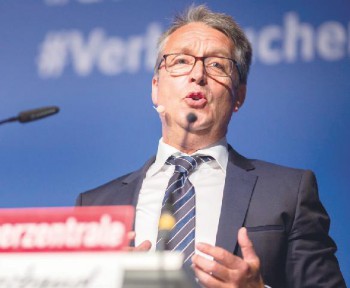 The first exposé in established media—following EIR—of the central banks’ scheme for a “green finance” bailout of the endangered Wall Street-London system, was presented on December 3 by former Handelsblatt editor Gabor Steingart, in his widely watched podcast and newsletter:

The ECB [European Central Bank—ed.] in Frankfurt, the European Investment Bank in Luxembourg and the EU Commission in Brussels are pursuing together a big plan, with risks and collateral effects that no national Parliament has been informed about. Europe will rescue the world climate—and it will do it with the printing press. Whatever it takes. . . .

The main instrument for the operation is, on one side, the European Investment Bank in Luxembourg. . . . The state-owned bank should draft, implement and finance eco-projects for EU1 trillion by 2030. The ECB accompanies this—with money from the printing press. In the framework of its already active purchase program, the ECB should now invest in green stocks and bonds. ECB President Christine Lagarde seems not to recognize a trespass here: ‘Climate change and environment protection should be in focus of all institutions,’ she said in the European Parliament.

Steingart accurately sums up that the central bankers “are going from bank bailouts to climate bailout.” Thus the climate fanatics are, in fact, pushing their own replacement for the global financial system. It is not a credit system, but an anti-credit system. It denies credit to industry, technology and households while pouring taxpayers funds and central bank printing-press money into green technology schemes—creating new profits for large banks while also doing nothing to sustain the current human population.

Because the leaders of the United States, China, Russia and India reject this Brave New World, they are the targets of the climate fanatics and their central bank backers; and in putting together a New Bretton Woods credit system they will become heroes to the rest of humanity. 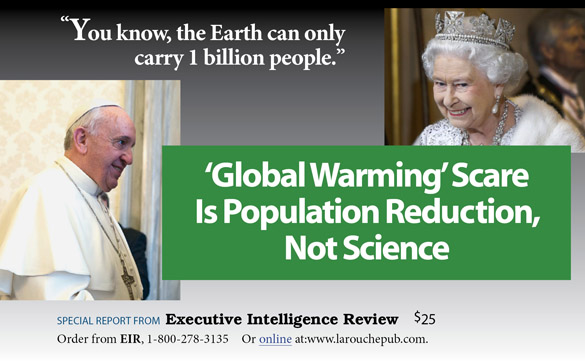