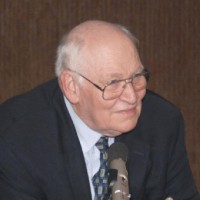 Hal Bluford Harrison Cooper, Jr., PhD, P.E., passed away on October 25, 2019, a few months shy of his 80th birthday. Cooper was a visionary, who would always insist on describing himself as practical. Among his many contributions to humanity, the most memorable may be the maps and blueprints he created, furthering the vision of worldwide economic development promoted by Lyndon and Helga LaRouche. From the proposal for a tunnel under the Bering Strait, to his advocacy of such grand projects as NAWAPA (North American Water and Power Alliance) and the Transaqua Project in Africa, Hal created a vast library of reports and feasibility studies outlining great programs for humanity’s future.

With varied training as an engineer, Hal worked on virtually all aspects of the productive landscape of the United States and many other nations, ranging from oil, coal and gas, to timber, paper, water, and many aspects of transportation, especially rail.

Hal was born Feb. 19, 1940, in Ames, Iowa. Moving with his family, his youth was spent in New Jersey and California, where he went to high school in Pasadena. Hal studied at the University of California, Berkeley, and the University of Washington. He held a doctorate degree in chemical engineering. He was a professor at Texas A&M University at College Station, Texas and later at the University of Texas in Austin. He next moved to New Mexico, where he worked at Los Alamos National Laboratory for one year, followed by consulting work in Kirkland, Washington, including at the Hanford Project.

He and his wife Carol had only recently relocated their household from Kirkland to Coeur d’Alene, Idaho, to be near their son and his family, when Hal was stricken with acute respiratory illness. Besides Carol, Hal is survived by sons Eric and Courtney and their families, and two brothers. 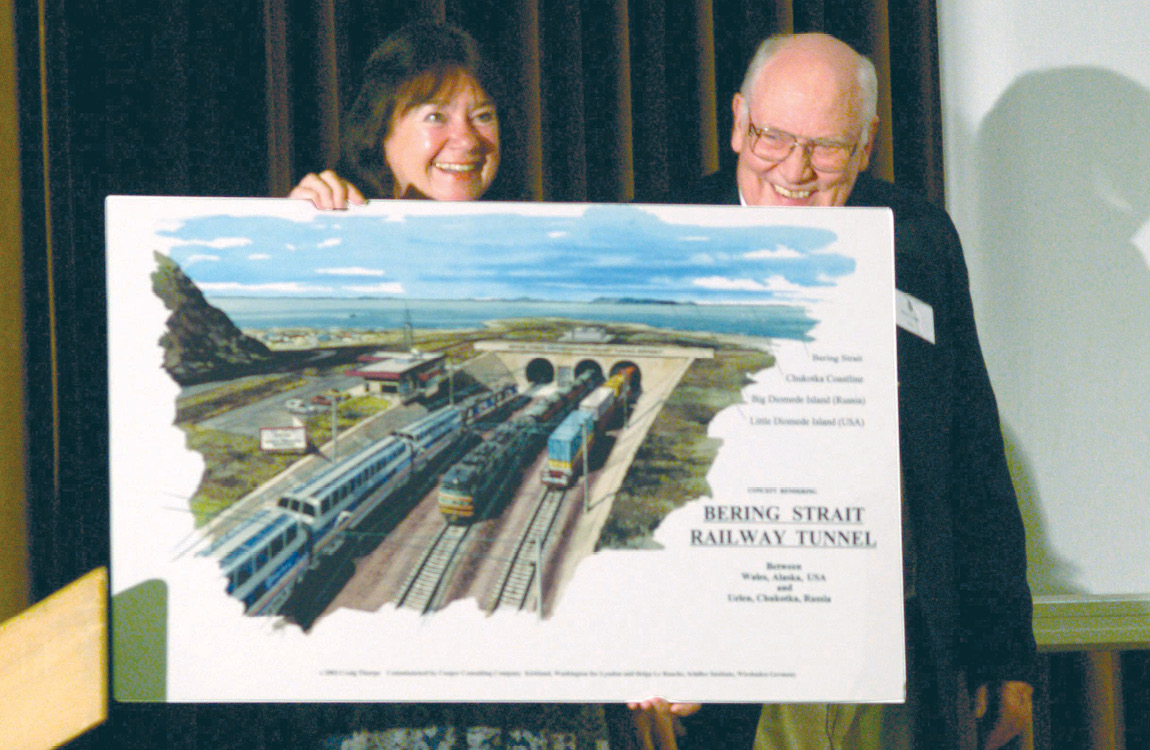 EIRNS/Julien Lemaître
Hal Cooper presents Helga Zepp-LaRouche with his vision of a Bering Strait tunnel at a Schiller Institute World Land-Bridge conference in Kiedrich, Germany in 2007.

In 1988, Hal was moved to contact the LaRouche movement to express his excitement on seeing the Woman on Mars video, which LaRouche had commissioned to put forward the necessity of mankind’s role in space. Then in the early 1990s in London, Hal met an associate of Lyndon and Helga LaRouche, while he was attending a world transportation conference. A lifelong collaboration among them ensued, starting with the 1996 German publication of a world map of priority routes for intercontinental railroads, based on Hal’s recommendations. The map appeared in the 1997 EIR Special Report commissioned by the LaRouches, The Eurasian Land-Bridge: The ‘New Silk Road’—Locomotive for Worldwide Economic Development. Figure 1 shown here is titled, “Main Lines of a Worldwide Rail Network as Sketched by H.A. Cooper.” Most of these lines form the core network across Eurasia, and into Africa, now being developed under the China-initiated Belt and Road Initiative, first announced in late 2013 by President Xi Jinping. They also overlay the signature map of the EIR special report produced in 2014, The New Silk Road Becomes the World Land-Bridge, for which Hal consulted.

Over the next quarter century, Hal further developed details of these rail lines, in terms of them serving as development corridors, and priority links—such as the Bering Strait Tunnel, and he personally campaigned in support of making them happen.

For example, in late 2002 he spoke on rail corridors of development, at a conference in Novosibirsk, Russia, sponsored by the Siberian State Transportation University, on the theme of continental and intercontinental rail-grid integration, including connecting the Korean Peninsula with the rest of Eurasia. He spent time in Alaska and Canada on behalf of building out a true continental rail grid. He worked on projects for Central and South America, especially the proposal for a cross-isthmus canal and north-south railroad through the Darien Gap in Colombia. Hal spent time in North and South Dakota, promoting a Central North American Rail Corridor for the High Plains. He strongly advocated for power, water and agro-industrial programs in Africa.

He participated in multiple conferences with the LaRouche movement, from Seattle to San Francisco, to Houston, New York City, Washington, D.C., Vancouver, Ottawa and, in Europe, in Berlin and Kiedrich, Germany, and elsewhere. The list is long. He was ever ready to get up and go.

When he could, Hal would travel the actual route of priority transportation projects, putting studies together that he would print and send to leaders of nations, industry and farm leaders, tribal governments, and other concerned citizens who wanted to make the world a better place. He was an indefatigable cross-country driver. On one such trip, he called in to friends to describe how he had just narrowly escaped serious harm in Montana, when his car skidded off the icy road and down a culvert, and fortunately narrowly missed the barbed wire fencing. Hal was able to visit Capitol Hill to give briefings to members of Congress on western rail and water priorities, in Spring 2016—the last such foray he could make, given the constraints imposed by his declining health.

Hal could tell you every river, road, type of tree and rail gauge along the routes of these great projects, such as that along the North American west coast rail corridor that will inevitably meet up with China’s New Silk Road by tunnel under the Bering Strait. It has been proposed that the terminus on either end of the tunnel be named, respectively, after Lyndon LaRouche and the late scholar Stanislav Menshikov, the American and Russian scientist-statesmen who championed the project as perhaps the greatest symbol of the end of British Geopolitics and the beginning of an era of cooperation among the Americas, Eurasia and Africa. But perhaps the tunnel itself should be named after Hal, since that is almost the only part of the route from Southern California to Seattle, through Alaska, on through Siberia, and into Eastern Europe that Hal didn’t travel while assembling perhaps the only feasibility study in existence that outlines the Bering Strait Tunnel and the routes on either end. He campaigned for the tunnel tirelessly in British Columbia, through the Yukon, to Fairbanks and Anchorage. His hand-drawn overlays of the key rail routes (and gas lines and other infrastructure) are now all over the internet. Hal presented an artistic rendition of the Bering Strait Tunnel to Helga Zepp-LaRouche, at a Schiller Institute conference on the World Land-Bridge in Kiedrich, in September 2007. 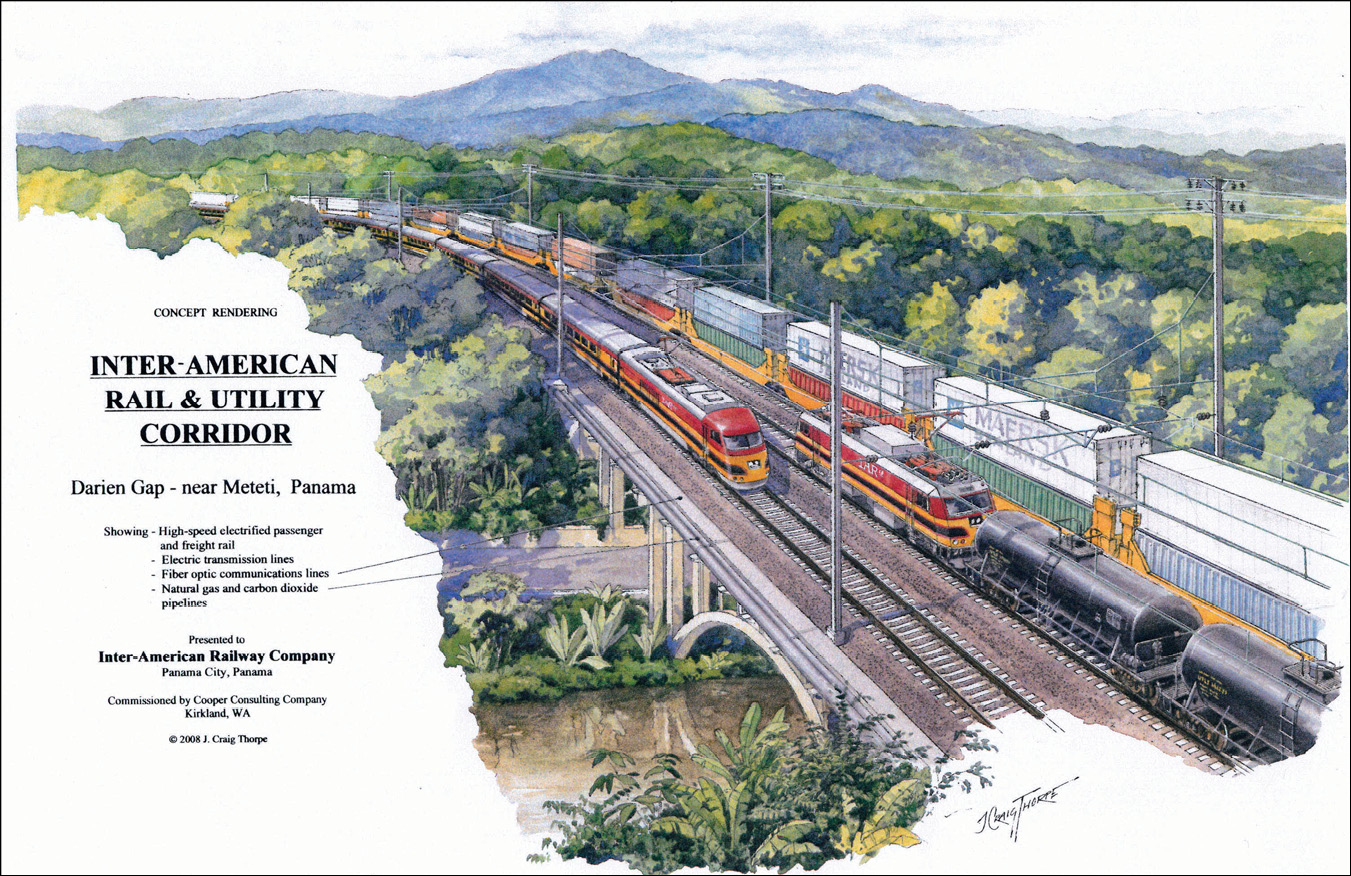 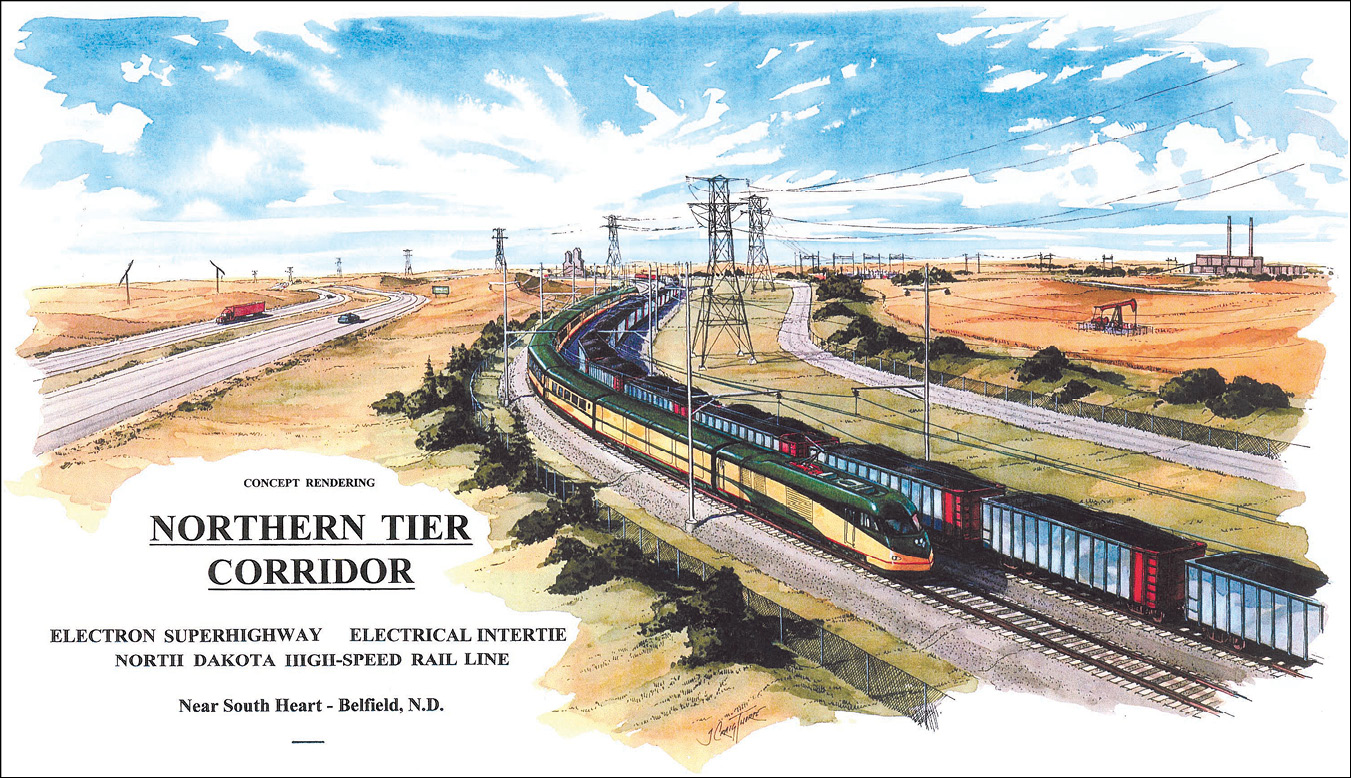 He always insisted on the importance of people being able to see what the future would look like, and he commissioned artworks for key links and corridors by J. Craig Thorpe of Bellevue, Washington, to that end. These beautiful images now constitute a gallery of world development. Thorpe spoke passionately at the memorial for Cooper in Seattle, November 30. Thorpe was able to describe the “eye to the heart” that was involved, in the way Hal collaborated with him, to make the future sensuous through the art.

Hal was keen for updates every day on infrastructure progress and policy fights. For example, near what were to be his last days, Hal heard with glee about the new Eurasian freight train going through the Marmaray Tunnel to cross the Bosphorus Strait. “I didn’t know that was finished yet! I bet that will make the British mad!” 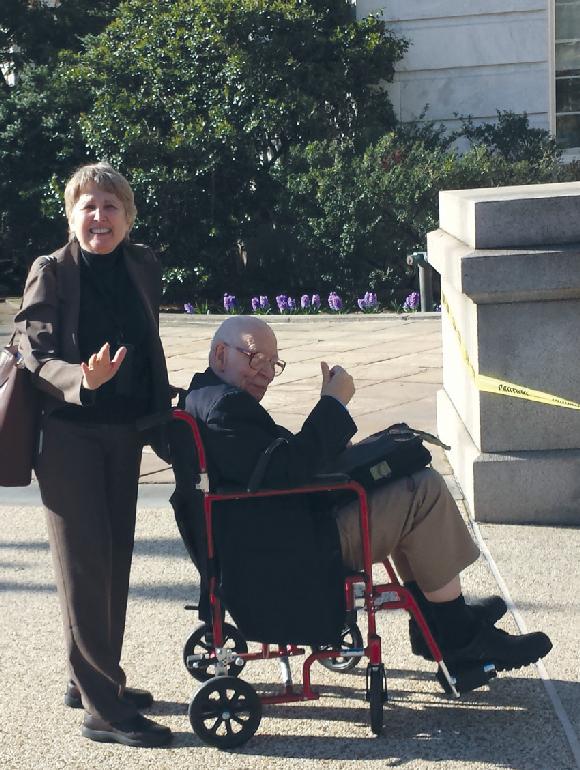 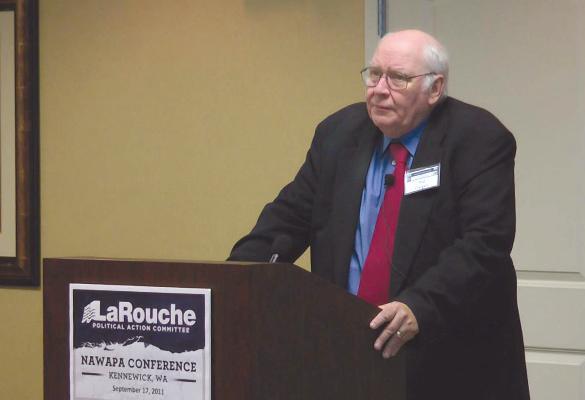 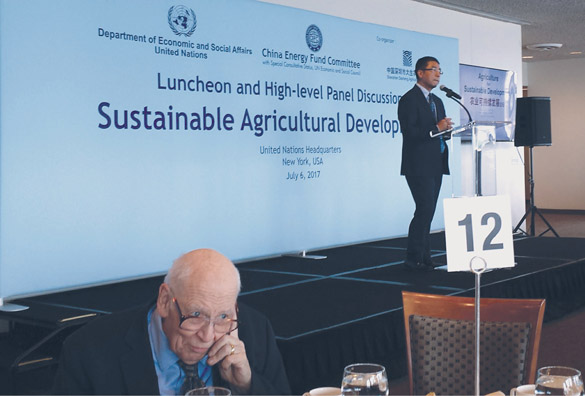 In his own unique way, Hal represented Lyndon and Helga LaRouche at major infrastructure and development conferences around the planet, on virtually every continent. For example, in 2008 he was in Istanbul, Turkey, for an international railway conference. While Hal’s presentations were packed with the precise details that gave substance to these visionary projects, he usually managed to wing a few zingers at the financial oligarchy of London and Wall Street, chiding them for their insistence on not allowing these great projects that would benefit all of humanity.

While he was an engineer at heart, he was also intensely political to his core. However, he was a statesman who refused to engage in simple partisan politics, and worked with political networks of all party affiliations, seeking out those who wanted a better future for their nations, and their world. This commitment to humanity was the basis for his friendship and collaboration with Lyndon and Helga LaRouche, which was also the basis of his being blacklisted for projects and contracts that had political decisions involved. Despite that, Hal never lost sight of his larger mission and optimism for the future development of humanity.