Dec. 29—Orchestral and choral directors Gerard Schwarz and John Sigerson, pianists Tian Jiang and Maryam Raya, a diverse 130-person chorus, 65-person orchestra and the Schiller Institute New York City Chorus participated in the program “Beethoven 250, Celebrated!” at Carnegie Hall’s Isaac Stern Auditorium on December 16. The Foundation for the Revival of Classical Culture, which presented and sponsored the event, assembled a near-capacity audience of 2,400, including more than 1,000 students, teachers and parents, as well as musicians, diplomats, and others. For the first time in more than a century, performances including Beethoven’s Piano Concertos Nos. 3 and 5, the fourth movement of the Ninth Symphony, and the Brahms Nänie for chorus and orchestra—were presented with a modern, full Beethoven orchestra at the scientific tuning of C-256, a goal pursued by musicians and the Schiller Institute for over thirty years.

The 250th anniversary of the composer’s birth is now being celebrated throughout the world, from now until December 16, 2020. The Schiller Institute, through its Schiller Institute New York City Chorus, led off this concert in honor of Beethoven—on the first day of that year-long commemoration,—at New York City’s famous Carnegie Hall. The Schiller chorus sang a work, not by Beethoven, but by Johannes Brahms, Beethoven’s musical successor, the Nänie. Nänie is a choral composition set to a poem by Friedrich Schiller, Germany’s greatest poet, also known worldwide as “the poet of freedom.”

From the beginning—including in the welcoming remarks made by Germany’s Ambassador to the United Nations, His Excellency Christoph Heusgen, and by Lynn Yen, Executive Director of the Foundation for the Revival of Classical Culture—Beethoven’s musical rendering of Friedrich Schiller’s “Ode to Joy” was acknowledged as the moving spirit of the momentous events that, thirty years ago, had reunified Germany with almost no violence, healing the wound physically represented from 1961 to 1989 by the Berlin Wall. As Ms. Yen told the audience:

The chairman of our Foundation, Elvira Green, has said, “The example of Beethoven teaches us that we can rise above our limitations, and we can sometimes express far nobler ideals than our times, and perhaps even our lives, might seem to predict. It was for that very purpose that the Ninth Symphony was written—not for the rich, but for the poor in spirit; not for the materially privileged, but rather, for the spiritually committed.

Beethoven completed his great Ninth Symphony despite the fact that he could not hear. Music is not located in sound, it is only transmitted through sound. Beethoven’s music came from his soul, and that is the miracle of the Ninth Symphony. It is a miracle, not only of musical performance, but of universal solidarity and brotherhood, expressed through a musical composition’s performance. It is just the sort of miracle that New York City, the United States, and indeed, this world, desperately need to see.

The German Ambassador to the United Nations, Christoph Heusgen, in addressing the 2,400-person audience, said:

As a German, of course it’s very special to stand here, tonight, on the day of Ludwig van Beethoven’s birthday, the most famous German composer. While what we are commemorating today is Beethoven’s 250th anniversary, it was almost 30 years ago that there was a big celebration of German unity. On the 12th of November 1989, after the fall of the Berlin Wall, when many compatriots from East Berlin and East Germany went to the shopping mall of the Kurfürstendamm, there were also many who went to another fantastic concert hall and that is the Berliner Philharmonie, also an iconic building. . . . Daniel Barenboim played there where he invited all East Berliners to come to the concert hall and listen to him play, and he played Beethoven. Beethoven was a revolutionary; he was a revolutionary with regard to music . . . but he was also somebody who followed the revolution, the revolution in France. He followed its ups and downs. . . . You’ll understand tonight when you hear the “Ode to Joy.” That this is something very special. 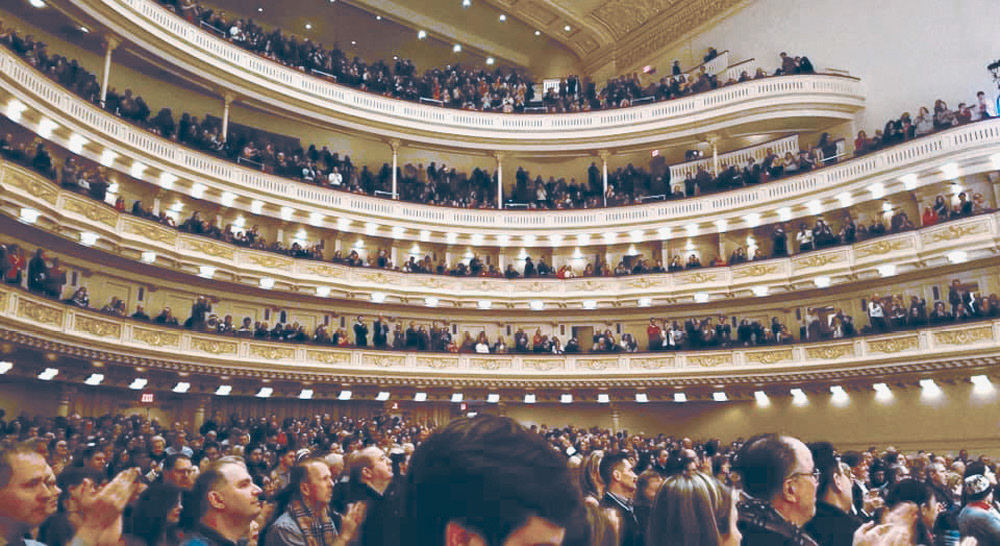 Courtesy of Lynn Yen
A near-capacity audience of 2,400, including more than 1,000 students, filled the hall to hear Beethoven and Brahms, many for the first time, and performed at the scientific tuning of C-256.

For Many, Their First Classical Concert

Notes for the concert program informed the audience that:

The compositions presented tonight—three by Beethoven, one by Brahms, and two poems by Friedrich Schiller that were set to music by the two composers—are exemplary of the best work of all three artists. Most notably, all are being performed at the “Verdi tuning,” where the middle “C” is at 256 cycles per second, resulting in an “A” in the range of 430 to 432, a much lower pitch than is commonly heard in many concert halls today. Authenticity need not demand that one perform on late 18th century period instruments. Instead, this is a modern orchestra, performing with modern instruments, but at the proper tuning. In “retuning” we seek to present a program which, combining artistry with science, strives to reach as close to the intent of the composers as possible.

From April 8, 1993, when the Schiller Institute held its groundbreaking forum on registration and tuning at Carnegie’s Weill Recital Hall, featuring the renowned tenor Carlo Bergonzi and eight singers—decisively demonstrating the case for the tuning of instruments at C-256—and from even before, the name of Lyndon LaRouche has become synonymous with the campaign for returning concert performances to the tunings used by Mozart, Haydn, Beethoven and other Classical composers.

LaRouche, who initiated “the scientific tuning campaign,” has provided the means for the practice of Classical culture to be resurrected as a mass, indeed universal, practice, perhaps beginning in the concert hall, but extending to every classroom on Earth, in principle. Wherever people can be inspired to sing, using bel canto principles of voice-placement and armed with the ideas of Beethoven, Bach and others, a revolution in human consciousness can be advanced that can, as if instantaneously, cancel out even the most pernicious effects of the “information society,” of war, and of cultural despair. 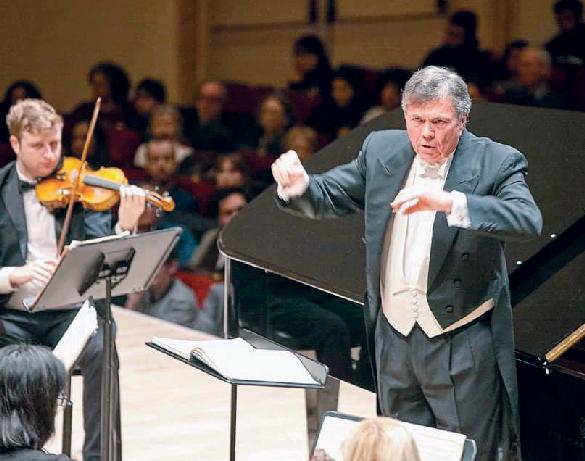 The performance of the final movement of the Beethoven Ninth Symphony, conducted by Gerard Schwarz—best known to New Yorkers as the director of the Mostly Mozart concert series for over twenty years and one of the main proponents of Classical music education in the city—riveted many in the audience, especially the 1,000 junior high school and high school students and their parents who were attending their first-ever Classical music concert. One person who had listened to a recording of the symphony many times was struck by “how much more complex it is” when heard with full orchestra. Some members of the diplomatic community remarked to one another that the tuning of the orchestra “sounded darker” and that the voices of the chorus were particularly resonant.

Though the full Ninth Symphony could not be performed, the well-known “Freude, schöner Götterfunken” theme allowed the performers—orchestra, chorus and soloists—to deliver the spirit of Beethoven’s message of universal brotherhood to many, despite the truncation of the work. Chorus members, many of whom, as per the Schiller Institute policy, are not professional musicians, were thrilled to find themselves on stage at Carnegie with a respected professional conductor, demanding from them that they, despite their limitations, collaborate to communicate this greatest of symphonic and vocal works.

In the year to come, the Schiller Institute intends to work on performing Beethoven’s Missa Solemnis in D major, the very pinnacle of sacred Classical music, a piece that will require the utmost in study and concentration from even the most trained singers. This piece, commissioned by Nikolai Galitsyn, the Russian prince who was also responsible for subsidizing three of Beethoven’s late quartets, was first performed in St. Petersburg, Russia, on April 7, 1824. Beethoven thought of his Mass, his Ninth Symphony, and other of his works, as capable of bringing the leaders of the world to a higher level of deliberation, of humanity, that could end war. The insight of Confucius, “When music and courtesy are better understood and appreciated, there will be no war,” was clearly shared by Beethoven.

The Schiller Institute’s Helga Zepp-LaRouche, who suggested recently that the entire year of 2020 be devoted to the theme, “Think Like Beethoven,” has always seen the Institute’s emphasis on Classical culture as the most efficient means by which the United States, or any other nation, can pursue the most advanced diplomacy with all other nations. It is by emphasizing the best offered by each nation, as the true identity of that nation, that a universal shared understanding and “world harmony” among sovereign nations can yield a concert of peace through economic development. 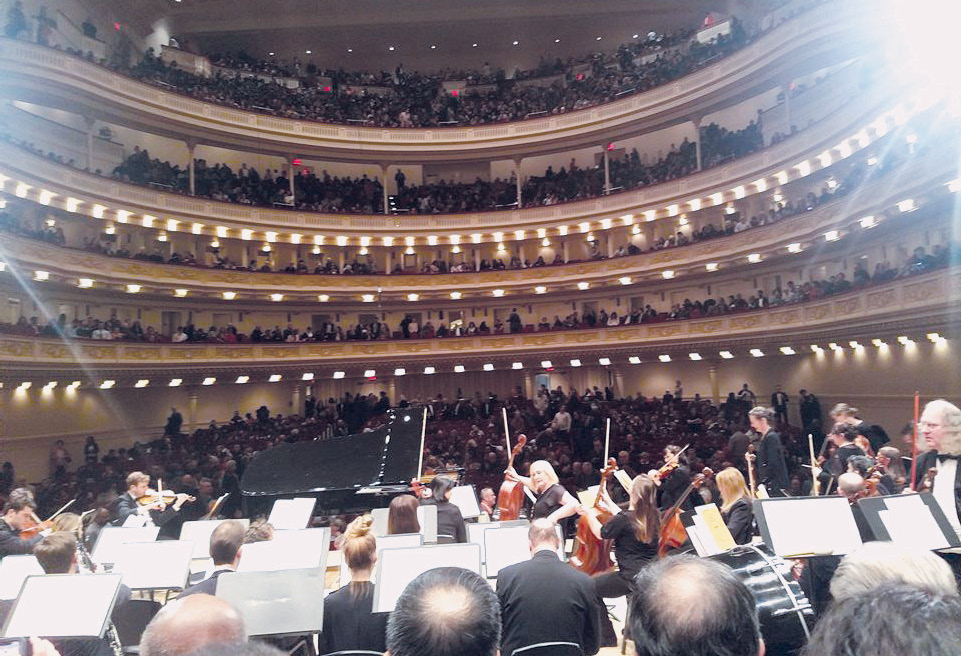 Courtesy of John Scialdone
Above, an expectant moment before the performance. Below, the Beethoven Celebration Orchestra plays under the baton of Gerard Schwarz. 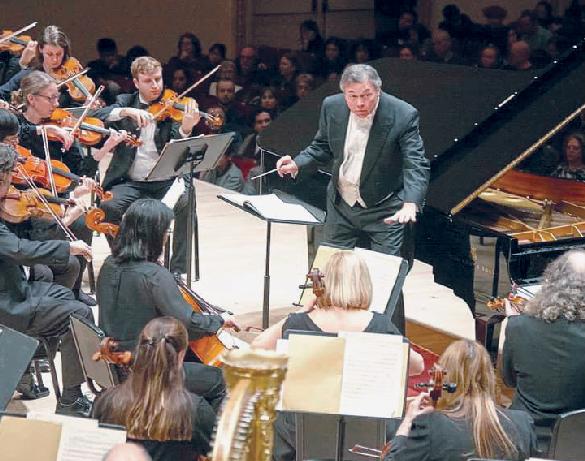 Lyndon LaRouche’s musical writings, including his articles, “Beethoven As a Physical Scientist,” “The Substance of Morality,” and “The ‘Florestan Principle’ In Art” will not merely supplement, but transform that effort. Archival work on LaRouche’s writings, and his small-group discussions of Classical musical composition, as they are made public, will send shock waves through the Classical world, and will be welcomed by those who decide to take advantage, worldwide, of the occasion of renewal offered by Beethoven’s 250th anniversary, only six years from that of the American Revolution in 2026.

LaRouche’s 1999 video documentary, “Storm Over Asia,” composed by him as a lesson on how to apply Classical principles to the study of current history from the standpoint of what historian Friedrich Schiller referred to as universal history, opens with the first movement of Beethoven’s Sixth Symphony. The reader is invited, in viewing that presentation, to ask, “Why is this music not merely background, but essential to the presentation of this political forecast?” By answering that question, the true, life-and-death urgency of responding to the admonition, “Think Like Beethoven!” can begin to be palpably sensed, and then, with work and time, fully understood.

The Foundation for the Revival  of Classical Culture is an independent non-profit organization which presented the December 16, 2019 concert at Stern Auditorium/Perelman Stage of Carnegie Hall, titled “Beethoven 250 Celebrated.” The Schiller Institute New York City chorus was invited to participate in the celebration, and it opened the concert with a performance of Brahms’ Nänie.