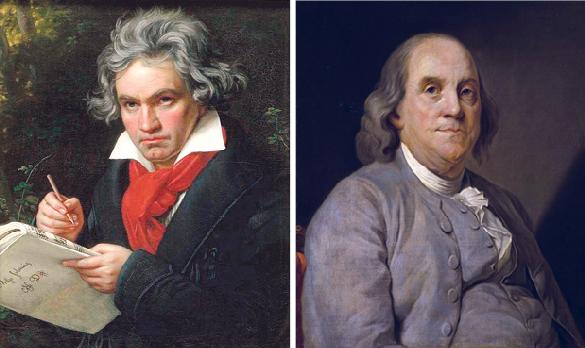 Left: Joseph Karl Stieler, 1820; right: Joseph Siffred Duplessis, 1785
The revolutionary Ludwig van Beethoven admired the American Revolution, and in particular Benjamin Franklin, the American who personified to the world the idea of the freedom of the creative individual.

Today, Beethoven’s admiration for Ben Franklin, including writing music for Franklin’s musical invention, the armonica, is virtually unknown. That Beethoven once admired, and then denounced Napoleon, is often reported; his identification with Franklin and the American cause, however, has been conveniently allowed to fade from memory.

The modern idea of the freedom of the creative individual was created through the American Revolution, and in particular, its Declaration of Independence and the American Constitution. The man that personified that idea to the world was Benjamin Franklin. Benjamin Franklin’s work on electricity made him the most celebrated scientist in the world, and his advocacy of the American Revolutionary cause in Paris and Europe between 1776 and 1783 won over its most forward thinking and prominent artists, intellectuals, and statesmen. This included Mozart, who famously wrote music in honor of Franklin and his musical invention, the armonica, and Beethoven, who did the same.

Both Friedrich Schiller and Ludwig van Beethoven admired the American Revolution, which had set into motion the hopes and aspirations of millions, that the entire world might soon become free of tyranny. Schiller represented this concept by using the term Götterfunken (God’s sparks) in his poem “To Joy,” which begins with the words, “Freude, schöner Götterfunken.” Beethoven then wrote the most famous anthem in musical history, beginning with these same words. 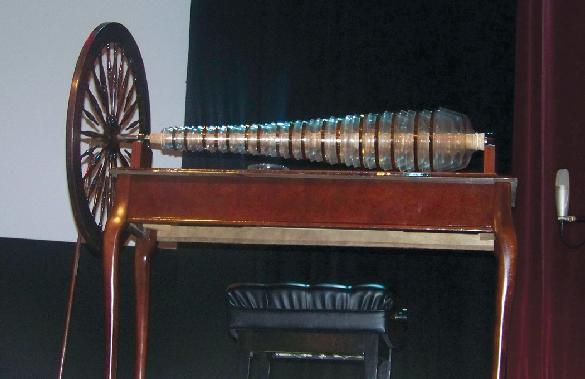 The expression, Götterfunken, was invented by Georg Forster, a German scientist and revolutionary, in a eulogy for Benjamin Franklin. Götterfunken was a pun, on both Franklin’s discoveries in electricity and its potential to uplift society above the brutal conditions of feudal serfdom and slavery, and the “divine spark of reason,” the source of such discoveries. In his eulogy, Forster says of Franklin:

Reason—and only through reason is virtue possible, that is, only reason and nothing but reason—that is the magic with which Benjamin Franklin moved earth and the heavens. . . .

Benjamin Franklin! Noble shadow! Let your teachings move the peoples of the world, let them know your great, unforgettable example. I hear your voice, I hear your words, I will never forget them!:

You, children of Europe! Honor the divine spark of Reason within you. . . .