BACK TO THE MOON

If God wanted man to become a spacefaring species, he would have given man a Moon. 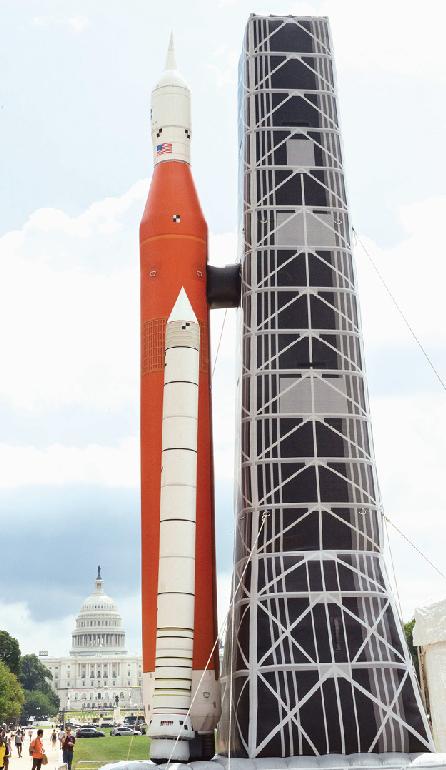 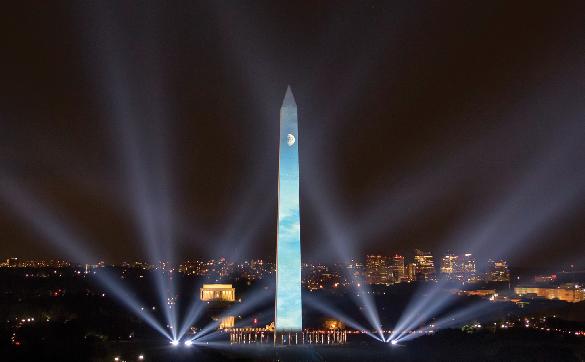 NASA/Bill Ingalls
The 50th Anniversary Celebration on the Mall in Washington, D.C. of the Apollo 11 mission that brought man to the Moon, featured a full-scale mock-up of the Saturn V rocket, and an image of the Moon projected onto the Washington Monument. July 19, 2019.

Dec. 19—More than a half million people converged on the National Mall at the Washington Monument this year to celebrate the 50th anniversary of the first Apollo Moon landing mission. Millions gathered in locations throughout the United States and around the world to mark the anniversary of the remarkable achievement of the first men to set foot on the Moon in peace for all mankind. The optimism of the space program and what it did to transform the lives of so many during the years of Apollo were well remembered this year.

There is a saying, “All good things come to an end.” That certainly appeared to be the fate of the Apollo program: The final nail in the coffin of America’s lunar landing program was being engineered by radical environmentalists and budget cutters long before Dec. 19, 1972, when the last Apollo mission touched down on Earth after completing humankind’s last journey to the Moon. The crew of Apollo 17 included Ron Evans, command module pilot; Gene Cernan, Commander; and Jack Schmitt, the lunar module pilot. Cernan and Schmitt were the last astronauts on the surface of the Moon.

The Apollo 17 astronauts would collect samples of some of the oldest rocks on the Moon from the basin walls surrounding the Apollo 17 landing spot, the Mare Serenitatis, the Sea of Serenity. The study of these ancient rocks showed that some of them had been formed from the Moon’s magma ocean 4.5 billion years ago and were brought up to the lunar surface when there was a huge impact event on the Moon 3.9 billion years ago, forming the Serenitatis Basin. 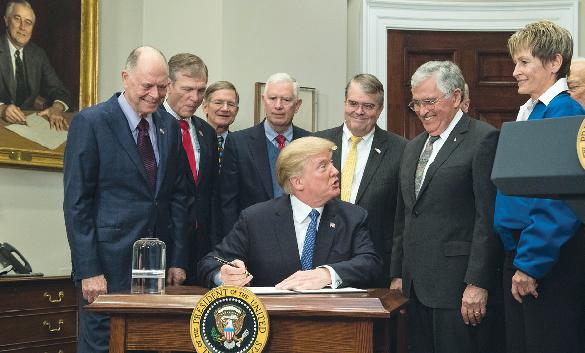 NASA/Aubrey Gemignani
President Donald Trump signing Space Policy Directive 1 on December 11, 2017, committing the nation to “lead the return of humans to the Moon for long-term exploration and utilization, followed by human missions to Mars and other destinations.” Present, on Trump’s left, are former astronauts Harrison “Jack” Schmitt, and Peggy Whitson. Not shown, but also present, were astronauts Christina Koch and Buzz Aldrin.

To Live and Work on the Moon

Now, forty-seven years after the last Apollo mission, America’s lunar space mission has been given a new beginning. That which some said had to be brought to an end, was instead given new life with the signing of Space Policy Directive 1 by President Donald Trump on December 11, 2017. That directive calls for American astronauts—the first woman and the next man—to return to the surface of the Moon, with an updated timeline of 2024.

One of the last astronauts to walk on the surface of the Moon, geologist Harrison “Jack” Schmitt, was present at the White House during the signing of Space Policy Directive 1 and has been instrumental in promoting the importance of returning American astronauts to the Moon.

Schmitt was once quoted as saying, “By going back to the Moon, you accelerate your ability to go anywhere else—both in terms of experience and in terms of resources, and testing new hardware and navigation techniques, communication techniques and things like that.” He said further, “And it’s only three days away.”

On the subject of Mars, Schmitt said, “I don’t think we’ll go there until we go back to the Moon and develop a technology base for living and working and transporting ourselves through space.” 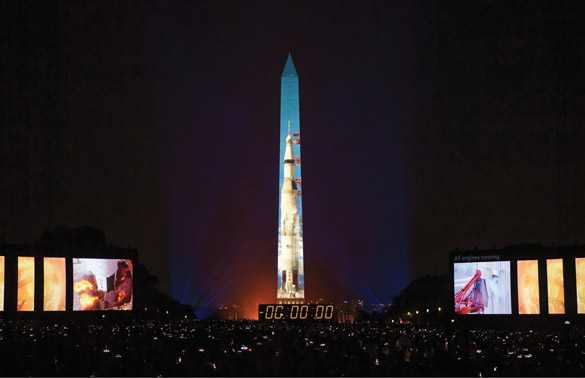 NASA/Bill Ingalls
A Saturn V rocket projected onto the Washington Monument, at T-minus zero before “lift-off.”

This is exactly the mission intention of the Artemis program, beginning with the next human lunar landing slated for 2024—to learn to live and work on the Moon for the long term, to develop a sustainable presence on the Moon, to prepare us for human travel to Mars and other planetary bodies.

The development of lunar industrialization and settlement of the Moon was the vision and life work of the great space pioneer Krafft Ehricke, and it has been the continued life mission of the movement of Lyndon LaRouche, to advance the commitment to a Moon/Mars mission and fulfill the extraterrestrial imperative of mankind in the solar system.