This article appears in the January 24, 2020 issue of Executive Intelligence Review.

INTERNATIONAL CHORUS FOR A NEW AGENDA

Jan. 20—The fifteenth of January, Martin Luther King’s birthday, was an International Day of Action to circulate Helga Zepp-LaRouche’s call for an emergency Trump-Putin-Xi summit, and to rally people on all five continents to devote themselves optimistically to “winning the peace.” In a parallel action directed to the same end, Russian President Vladimir Putin, in his State of the Nation address on January 15, called for a new process among the five permanent members of the United Nations Security Council to ensure that global war does not take place.

Activists around the world endorsed Mrs. Zepp-LaRouche’s statement, with a common understanding that we, members of the human species, must not accept the continuing state of current history, in which we each perpetually hold our breath, fearing what next crisis might trigger an escalation toward regional war in Southwest Asia, with the threat of Thermonuclear World War lurking close behind. Rather, let us raise an international chorus of voices demanding a change in the agenda: The time has come for Presidents Donald Trump, Vladimir Putin, and Xi Jinping to meet, to address the crisis between the U.S. and Iran, and to initiate steps toward finally ending the danger of an extinction war.

The call was joined by organizations including the LaRouche Political Action Committee in the USA (founded by the late Lyndon H. LaRouche, Jr.), Bürgerrechtsbewegung Solidarität (BüSo) in Germany (led by Helga Zepp-LaRouche), Solidarité & Progrès in France (chairman, Jacques Cheminade), the Citizens Electoral Council in Australia (CEO Craig Isherwood), the LaRouche Citizens Movement of Mexico (MOCILA), the Amazonian Integration Network in Defense of the Environment and Biodiversity (REDIA, led by Roberto Vela Pinedo) in Peru, and LaRouche South Africa (LSA, led by Ramasimong Phillip Tsokolibane). All of them endorsed the Schiller Institute statement.

Copies of the call for a peace summit were distributed on the streets on both sides of the Atlantic and shared across the planet on social media, and through direct emails. Reports of distributions have been received from Frankfurt, Mainz, Wiesbaden, and Berlin, Germany; Stockholm, Sweden; Copenhagen, Denmark; Paris, France; Lima, Peru; Hermosillo, Mexico; Evaton, South Africa; Montreal, Canada; and from the United States—New York, Connecticut, Boston, Baltimore, Chicago, and Washington, D.C.; Houston and Austin, Texas; Detroit, Los Angeles, and the San Francisco Bay Area. 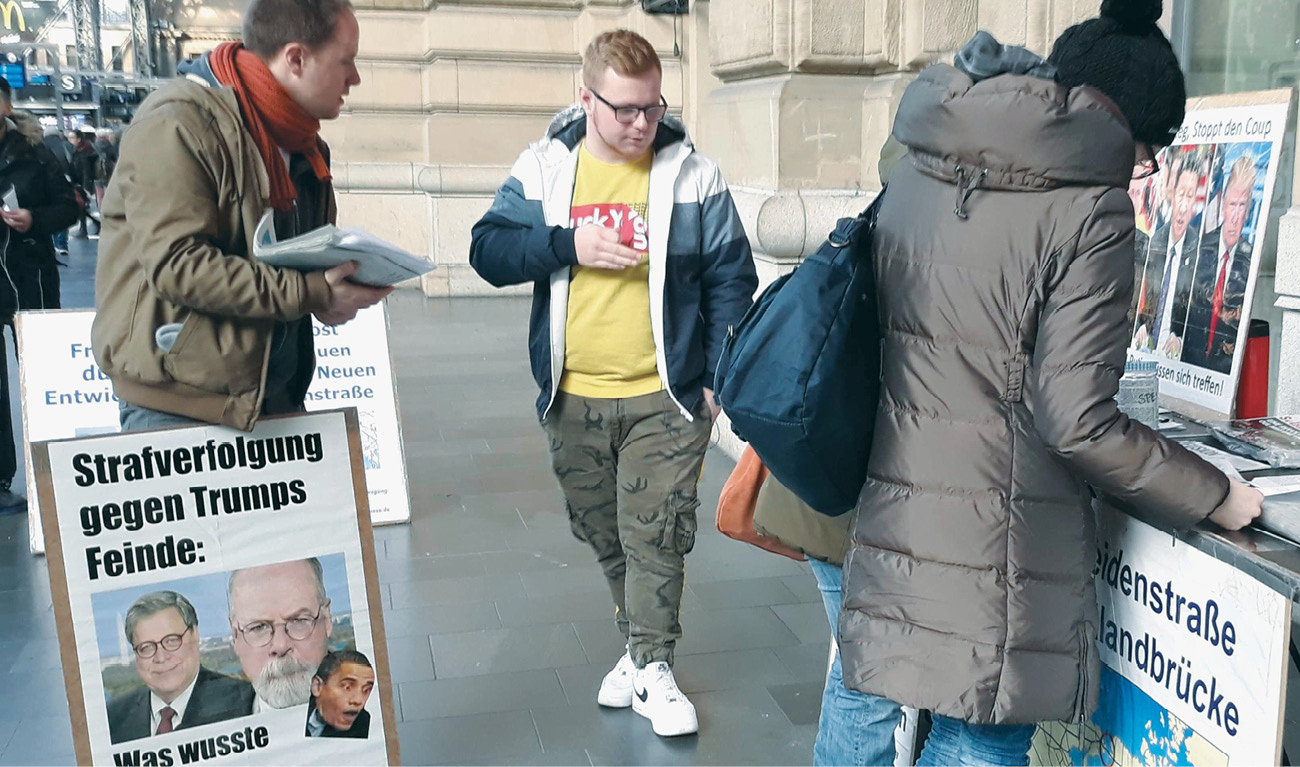 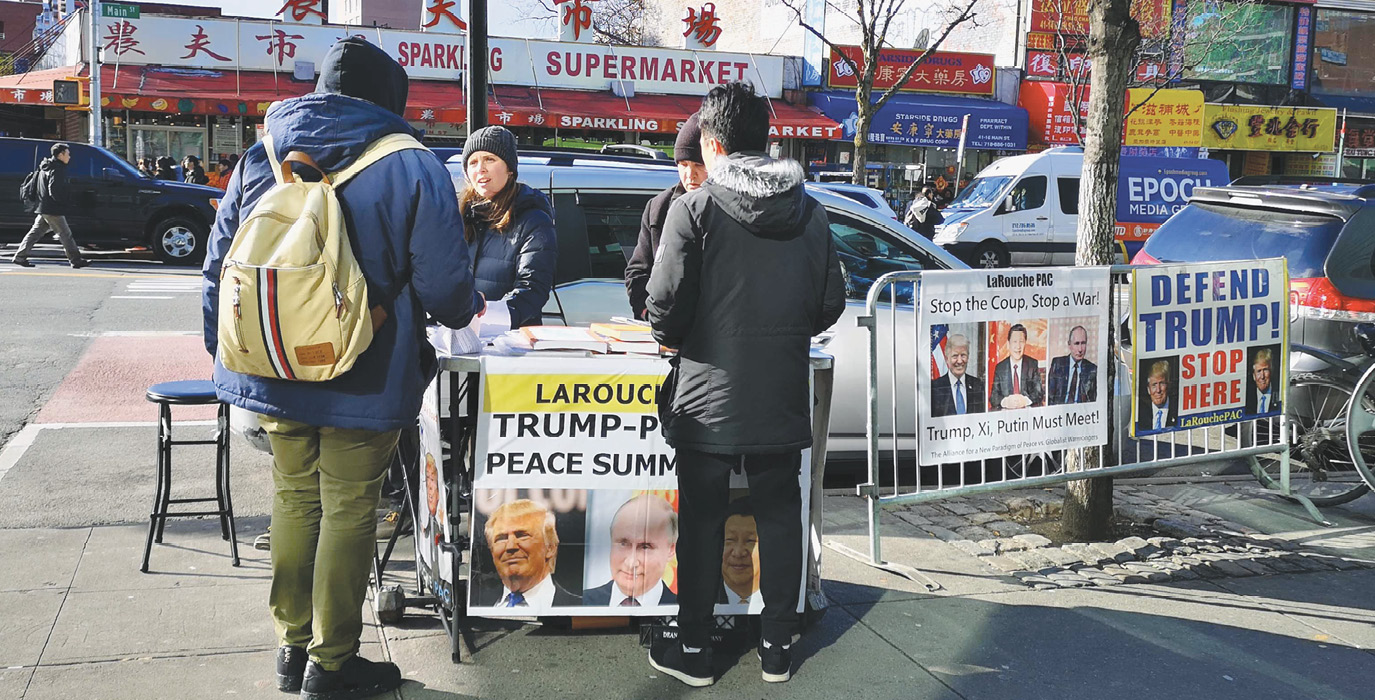 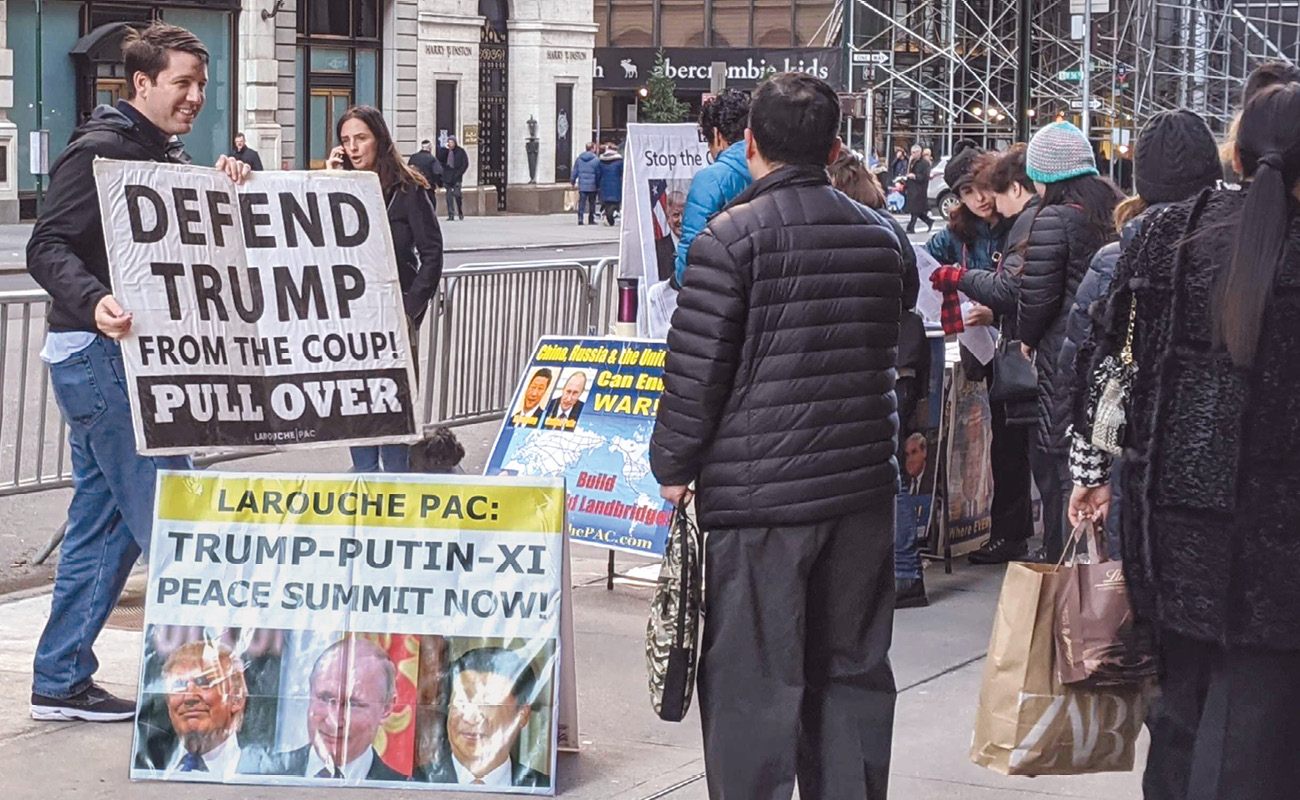 Students on college campuses were also reached. In Hermosillo, Mexico, two organizers distributed the call to 300 students at the University of Sonora, inviting them to an upcoming event at the Civil Engineering department to discuss the vital elements of the LaRouche economic development strategy for Southwest Asia and the world. Recent political discussions at venues ranging from the University of Houston in Texas to several college campuses in Michigan and New York, demonstrate that today’s youth generation does not have the same assumptions about the inevitability of war that afflict many among the older generations. Bringing the power of these youth to bear on the creation of this summit, may be essential to victory.

Activists made sure that the call for a peace summit got to policy makers and journalists all over the world. LaRouche PAC organizers in Washington, D.C. hand-delivered the call to the media stationed at the National Press Club, and leafleted the area surrounding the White House, reaching tourists and those involved at the highest level of the national’s politics. One person who took a flyer wanted it to be known that he had attended the signing ceremony of the U.S.-China trade deal and another that he would make sure it got to the right people when he returned to Moscow. As of this writing, we know that Zepp-LaRouche’s call was received by state legislative officials in Maine, Massachusetts, Texas, and Utah. More than 130 offices of United Nations member states received the international call. Other United Nations officials were reached by organizers in Montreal, Canada. Hundreds of leaflets were distributed a block from the United Nations Headquarters in New York City.

In Germany, organizers of the BüSo visited the environs of the Bundestag (the parliament) and the Foreign Ministry building in Berlin. In Mexico, MOCILA activists attended a “China Day” event hosted by the Ministry of Economics, bringing Mrs. Zepp-LaRouche’s statement, as well as the MOCILA open letter to President López Obrador proposing a LaRouche strategy to defeat Dope, Inc., to the attention of leading diplomats. Teams of Solidarité & Progrès organizers got material to the crowds passing by the National Assembly and the Foreign Affairs Ministry in Paris. 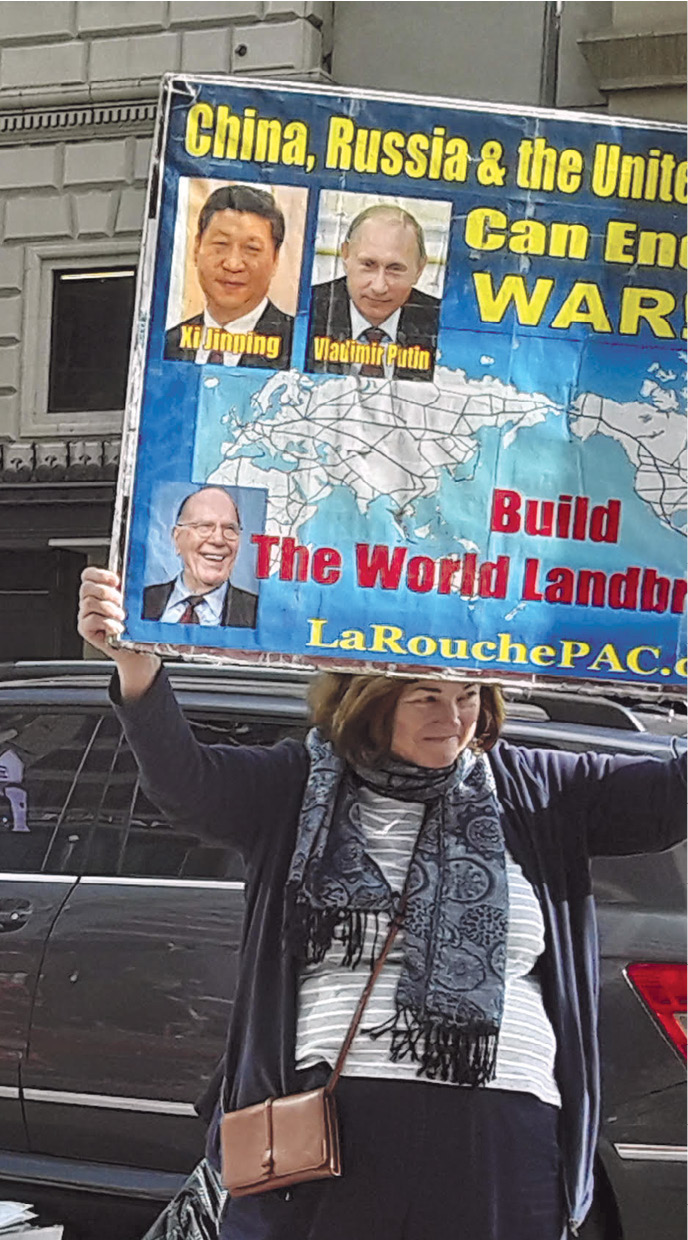 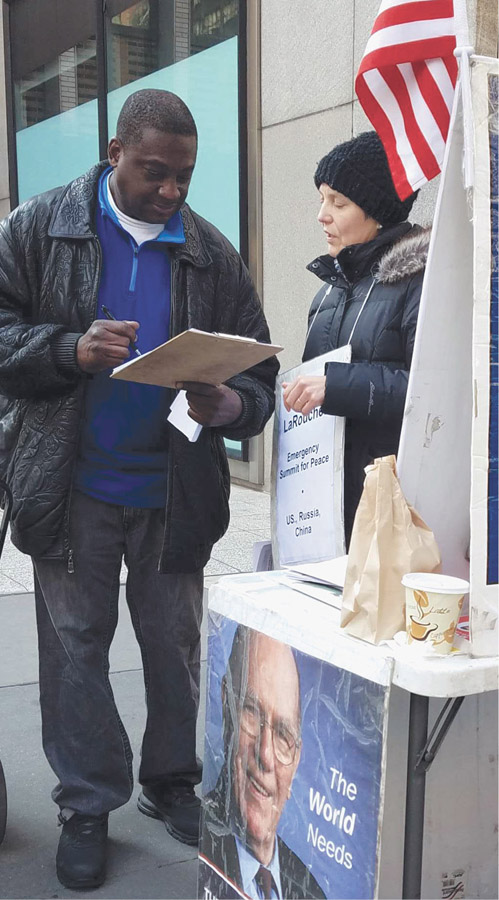 The report from those organizers in Boston stands out in showing the potential to now end the geopolitics of war that has so plagued the human race. The name of LaRouche and the urgent cry to end these endless wars—to take the world from the brink of nuclear annihilation—were clearly drawing people in.

A 60ish graffiti artist sporting Bernie Sanders buttons came up to express support and complain about how badly Sanders was treated in 2016. When he was told that the Russiagate fraud hijacked the story of Clinton rigging the Democratic primaries, he replied, “Yeah, and the b**** still lost!” A woman who did not like Trump, found herself forced to consider a Trump-Xi-Putin peace summit seriously. She came over to talk to the organizers expressly because they were with the LaRouche movement.

Most political personas crack in these types of crises, and that’s a very good thing. Several young people were emphatic that Zepp-LaRouche’s call must be made known on college campuses, and at teach-ins and peace marches—all this despite the freezing temperature, 20 mph winds, rain, and snow flurries.

Ten of thousands of people, if not more, are being brought into action through official and non-official Trump networks on social media, and internet-based logs and talk radio. 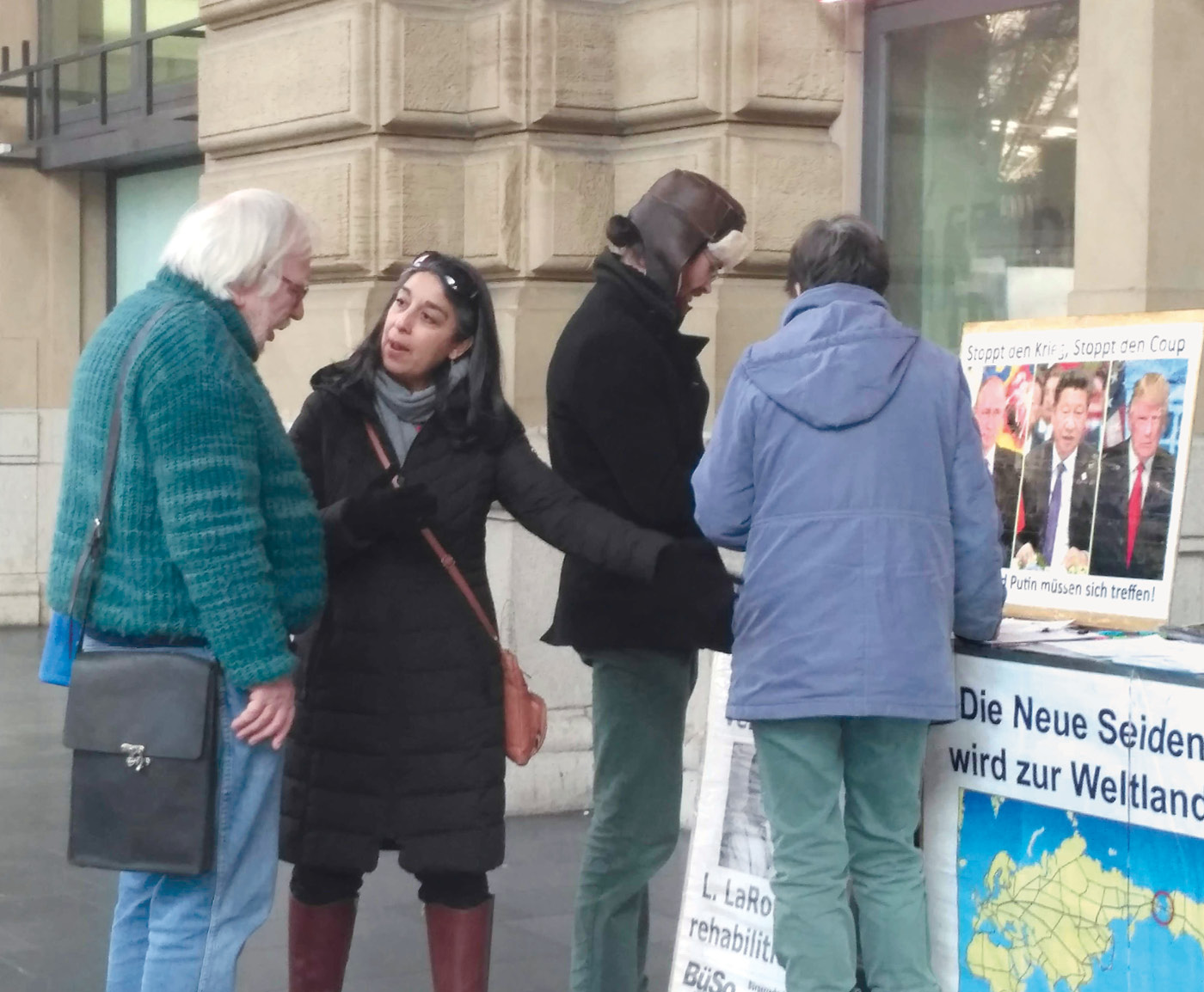 We began to distribute the statement as morning commuters were streaming by. Within minutes, two women stopped. “I’m worried about World War Three,” one said. She listened intently, but hesitated, seemingly discouraged by the enormity of the problem. The subjective challenge of the day had presented itself. How shall we move the individual person, to find his or her own identity magnified by the apprehension of a solution? A solution beginning with dialogue among the three Presidents, but leading toward the realization of a new organizing principle for world relations—a devotion to the common aims of mankind.

Looking up at the White House from Pennsylvania Avenue that day, as our team of activists did, one might have considered the potential significance of the meeting going on inside—the signing ceremony of the U.S.-China “Phase One” trade deal. President Trump remarked at that meeting that the agreement will lead to “a more stable peace throughout the world”; China’s Ambassador to the United States, Cui Tiankai, called the agreement “good for the peace and prosperity of the whole world.” But will the appropriate discussions take place among the leaderships of the world’s major powers, to ensure that such potential for peace may indeed become the end of war?