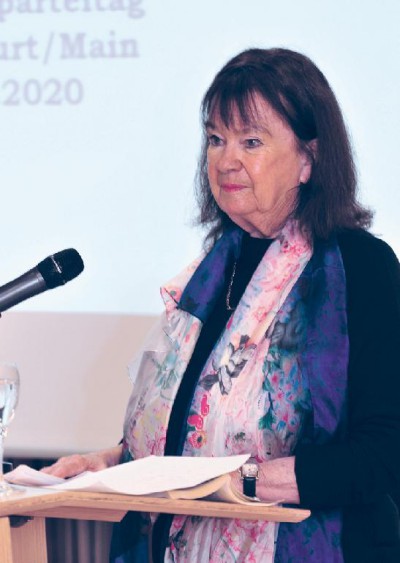 Feb. 8—At the February 2 opening of the 14th annual Federal Party Congress of the Civil Rights Movement Solidarity (BüSo) in Frankfurt am Main, Germany, the BüSo choir welcomed 100 members and guests with a little-known musical setting of Friedrich Schiller’s famous Ode to Joy by Schiller’s friend Christian Gottfried Körner—the very first setting of this poem—and a sing-along performance of Beethoven’s canon Friendship also set the tone for the event.

In her keynote speech, the BüSo’s Federal President, Helga Zepp-LaRouche, gave the participants a comprehensive overview of the world situation. She spoke about the crucial role of the BüSo as a catalyst for a paradigm shift, away from “green finance” and towards maintaining Germany as an industrial nation. She also included a strong emphasis on classical music and culture, especially this year, the year of Beethoven’s 250th birthday.

The Four Laws to save the economy proposed by Lyndon H. LaRouche are the basis for a far-reaching and long overdue restructuring of the global economy, she said. If the attempt to get President Donald Trump out of office fails, the way will be clear for a Trump summit with the heads of state of China and Russia, who will then discuss how the world can be brought out of its deep crisis. That means getting the world out of the trans-Atlantic monetarist malaise and geopolitics. She concluded by emphasizing that, above all, Agapē is needed at this time, as St. Paul says in his famous First Letter to the Corinthians. 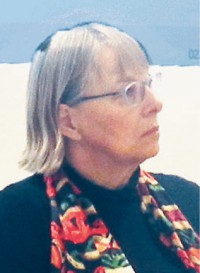 Elke Fimmen, the first deputy federal chairwoman of the BüSo, then gave the formal report on the party’s activities in the past two years since the federal election in autumn of 2017, and used election posters and publications to show the core themes of these activities: German participation in China’s Belt & Road Initiative, the “New Silk Road”; the reconstruction of the Middle East and especially Syria; a peaceful world order for the 21st century via the creation of a new global security architecture; and the fight against artificially stoked climate hysteria. In this context, she referred to the evil role of the mass media, which does more harm by hiding the positive alternatives to prevailing politics than by spreading “fake news” about Trump, Russia, China or climate change. 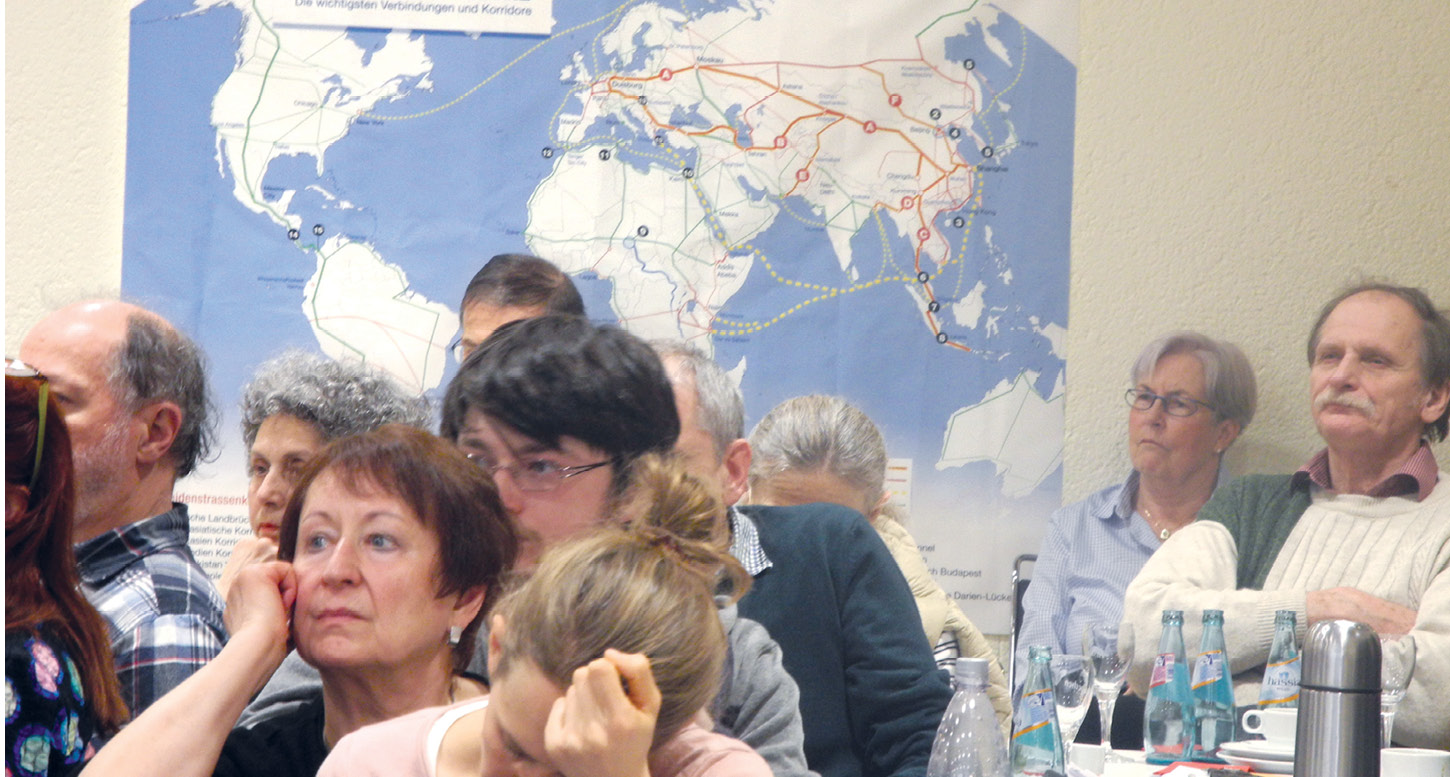 That is why the BüSo has a special responsibility to inform the population about the actual situation and its background. The BüSo weekly “Zepp-LaRouche im Dialog” internet forums with Helga Zepp-LaRouche, which are now viewed by up to 20,000, and sometimes more, viewers, are particularly useful, but also publications such as the new BüSo brochure, “Stop the Climate Swindle of Wall Street and City of London!” in which the efforts of the financial world to get through the new, upcoming financial crash through the creation of a new “green” financial bubble are explained.

This campaign is aimed in particular at all those who are being driven by developments in public protests, such as the young participants in the “FridaysForFuture” demonstrations, the victims of the coal phase-out in the Lusatia region of central Europe, or the participants in the farmers’ demonstrations in recent months. Especially in times like these, when the crisis is driving people into the streets in large numbers, Lyndon LaRouche’s ideas are indispensable to steer the protests in a positive, optimistic direction and to prevent pessimism from spreading, which then can very easily turn into violence. 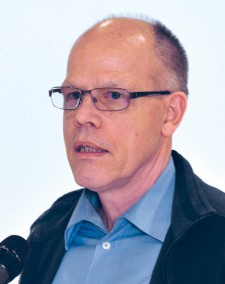 Subsequently, the second deputy federal chairman and BüSo treasurer Klaus Fimmen reported on the development of the party finances, whereby it became apparent that the party had achieved a growing influence in important questions despite limited resources, which is reflected in the greatly increased number of visits to the BüSo website and at the weekly internet forum of BüSo chairperson Helga Zepp-LaRouche. He cited important parts of the American Declaration of Independence and the Rütli Oath from Schiller’s play William Tell to remind people of their eternal rights and the ongoing mass strike process, which opens up completely new opportunities that must not be missed.

After completing these regular formalities, the focus was again on the political content, with a total of five presentations. 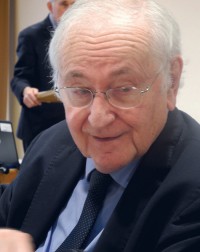 The first of these guest speakers was the former French presidential candidate and chairman of the Solidarité et Progrès party, Jacques Cheminade. He emphasized that the challenge of our time is to act according to what we are committed—that is, to be optimistic against all opposition:

That means that we cannot be discouraged by the stupidity of some, because our enemies in the oligarchy know how to use discouragement as a weapon against us.

The basis for human reason, he quoted Lyndon LaRouche, was the ability of people to “make creative discoveries that advance their scientific knowledge and convert such scientific advances into technical advances.” Therefore “this time, our time, is no time for pessimism.” It is a shame that Europe is being overtaken by Asia, Cheminade said: “We don’t even understand China’s win-win conception because we are trapped in the cage of prejudice of a deductive system, while the Chinese are always looking for solutions outside of the system’s established rules, by advancing into the realm of creative thinking, as taught by Franklin Delano Roosevelt’s America after World War II in its missions for productivity.” 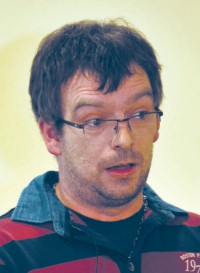 A panel discussion followed with speakers from agriculture, industry and science. Bernhard Perschl from Bavaria reported on the situation of the farmers and the reasons for their current wave of protests. In the past, the measures taken by politicians only affected individual sectors of agriculture, “but now the measures affect all farmers.” The measures are 90% green-ideological, but not technically justified; they reduce efficiency and endanger the economic viability of farms. He cited the manure regulation as an example: The period in which manure may be applied to the fields was severely restricted, and the farmers were therefore forced to store the manure that accumulated. But the construction of the manure storage facilities was not approved because the regulations issued for it could hardly be met.

Following Perschl’s presentation, Elke Fimmen read a greeting from American farmers to the German farmers, explaining their support for the ongoing protests and asking to establish and maintain contacts, exchange information and coordinate joint trans-Atlantic actions. 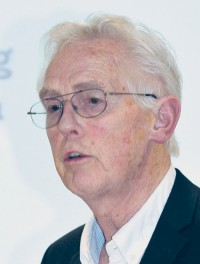 Gerd Marks, an industrial consultant with decades of experience in the paper and plastics industry, in mechanical engineering, automation and increasing efficiency, looked at the consequences of climate alarm for Germany as an industrial region.

The planned nuclear phase-out in 2022 and the coal phase-out planned for 2038 threaten a “transformation of gigantic, historical proportions,” Marks said. Above all, there is a danger from the “Big Five”: the Green New Deal, which he called a fiasco; the EU classifications that discriminate against major industrial sectors; “Green Finance,” a “ruinous strategy” that cuts off credit for industry; the volatile so-called “renewable” energies, which destabilize our electricity supply; and the so-called “circular economy,” more than just recycling, is a deficiency management system characterized by controlling and directing electricity consumption. The relocation of production away from Germany is already obvious. These policies promise to maintain prosperity, but then “prosperity” must be redefined, necessarily with a reduction in supply.

Marks contrasted this with the “right way into the future”: reconstruction of the physical economy, entry into modern, fourth generation nuclear energy. The world today needs “the space shuttle instead of the horse-drawn carriage,” he said, and demanded that Germany should leave the path that leads to a destructive economy of scarcity. 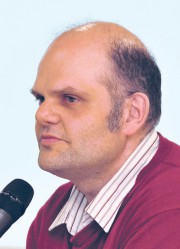 Dr. Armin Azima, physicist from Hamburg, took up this topic and continued it. He cited estimates that the price of electricity would rise to 60 cents per kilowatt-hour in the course of the nuclear and coal phase-out. With current electricity consumption, this corresponds to EU360 billion, which is 10% of German economic output. Then there would be the rising costs of storage and higher network costs. 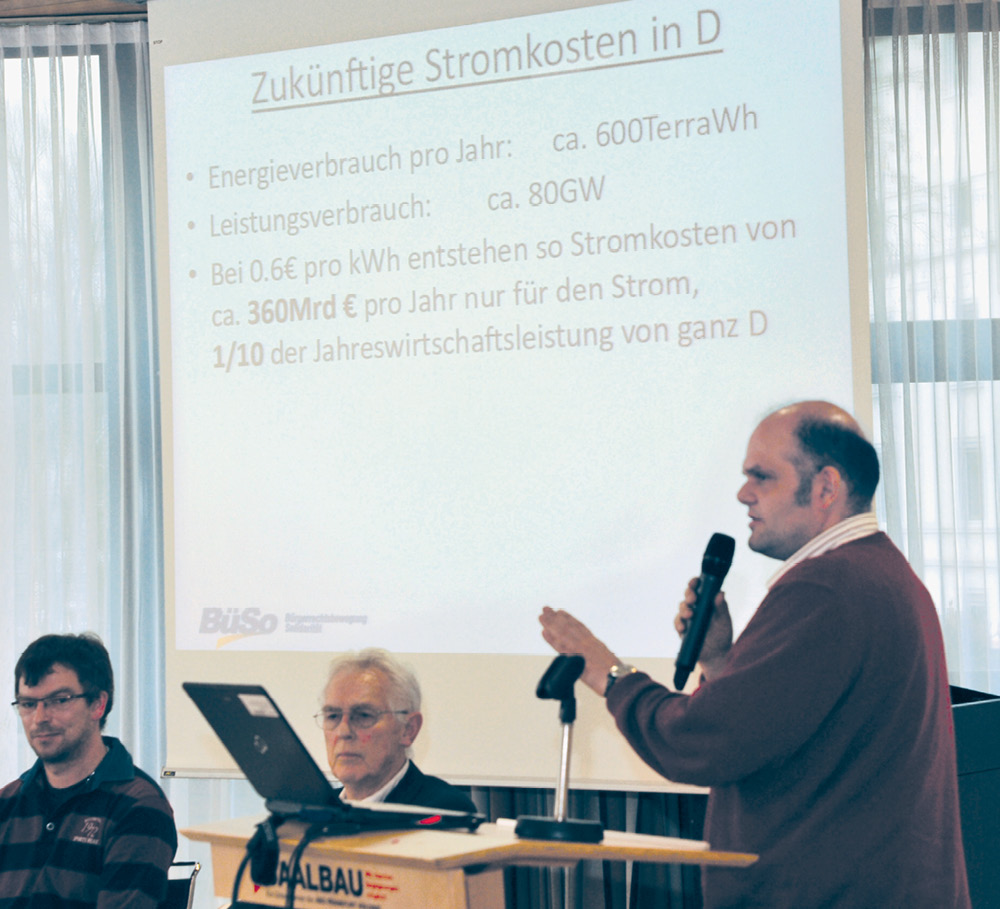 Nuclear fusion could offer a way out, but its development is currently hardly being promoted. In addition to government projects such as ITER and the Wendelstein reactor, there are a number of smaller, private approaches. As an example, he presented the concept of the FF-1 reactor from the U.S. company, LPPFusion, in which a hydrogen-boron fuel is converted into electrically charged helium nuclei with the help of a plasma focus in an aneutronic reaction. 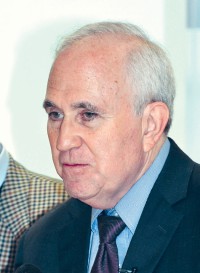 Harley Schlanger, longtime spokesman for Lyndon LaRouche in the United States and much sought-after interviewee for several American radio programs, then reported on the latest developments in the United States. This served to answer a certain skepticism about Donald Trump which had emerged in the discussion earlier. He reported on the impeachment process against President Trump, emphasizing the irony that the same Democrats, who today want to use the warmonger John Bolton as a key witness against Trump, had vehemently rejected Bolton’s nomination to be Ambassador to the UN in 2005 because of his lies and unreliability.

Trump had expressed his fundamental support for the main points of LaRouche’s Four Laws in the election campaign: he had called for a return to the Glass-Steagall banking separation system, he wanted to greatly expand investments in the productive sector and in industry, and he committed himself decisively to expand NASA’s space program. But so far, not much has been done in this direction due to the resistance to these policies.

Now that the coup has failed, Trump will have a freer hand than before, but there is no guarantee that he will use it to enforce the right policies. Therefore, it is crucial that we promote the right policies in the United States to awaken the true legacy of the American system. 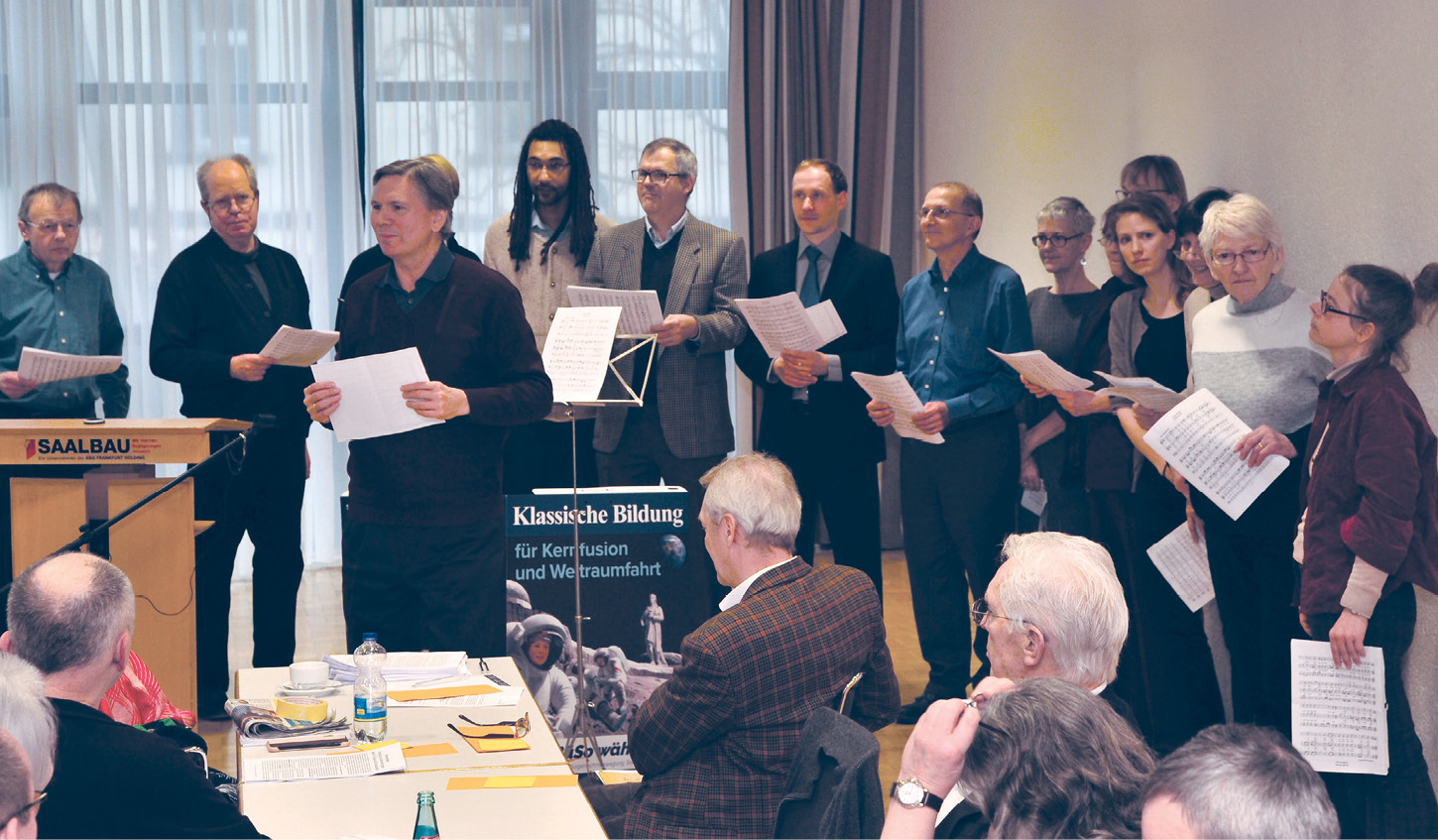 After their presentations, all speakers answered questions from the audience with great interest. Helga Zepp-LaRouche concluded the discussion with the assessment that it was clear that something had to change in our country, “and it is our job to achieve this.” The number of people who address it must grow dramatically. For this reason, activists should set up local groups of the BüSo in as many places as possible with regular meetings, in order to deal with these questions and to spread knowledge about them.