This article appears in the February 21, 2020 issue of Executive Intelligence Review. 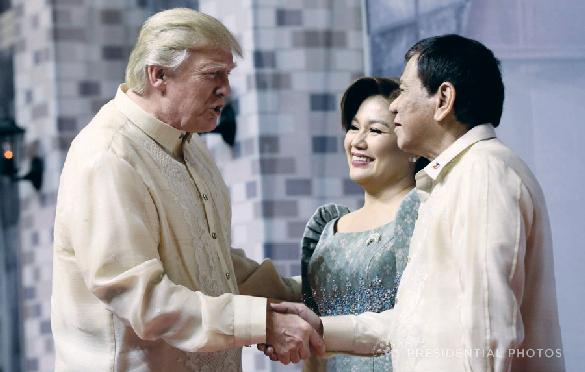 Feb. 18—Philippine President Rodrigo Duterte and U.S. President Donald Trump have something in common: They both want to get the U.S. military out of the Philippines. To the horror of the “swamp” in Washington—the press, the Congressional war-party (Republicans and Democrats alike), and even Trump’s own Cabinet—the President has once again demonstrated that he will distance himself from virtually everyone in “the Establishment” responsible for dragging the U.S. over the past decades into endless wars, economic decay, and the anti-science “Green” idiocy.

On February 4, the Duterte government presented the U.S. Embassy in Manila with an official notification that the Visiting Forces Agreement (VFA), that allows the U.S. to establish bases across the country for troops and military equipment, is rescinded. That agreement requires the U.S. to remove its military forces and equipment within 180 days of such notification.

I do think it would be a move in the wrong direction, as we both, bilaterally with the Philippines and collectively—with a number of other partners and allies in the region—are trying to say to the Chinese, “You must obey the international rules of order. You must obey—you know, abide by international norms.”

But President Trump begs to differ. Asked on Feb. 13 about Duterte’s order to remove the U.S. bases, Trump responded:

Well, I never minded that so much, to be honest. We helped the Philippines very much. We helped them defeat ISIS. I don’t really mind if they would like us to do that. . . . It will save us a lot of money. My views are different from others. [emphasis added]

Indeed, Trump is quite aware that the anti-China hysteria being riled up in the U.S. is aimed at him as much as it is at China, as demonstrated in the EIR Special Report, End the McCarthyite Witch Hunt Against China and President Trump. 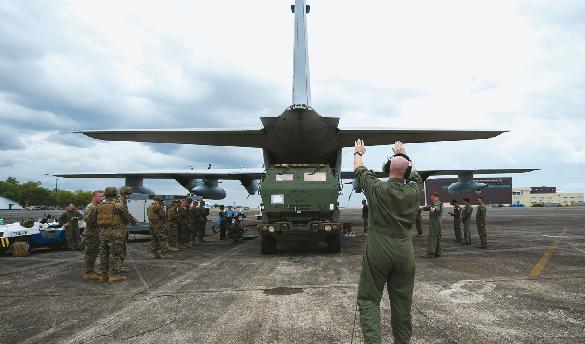 Leaders around the world are increasingly aware, and reporting openly, that the wild anti-China diatribes by Trump’s Secretary of State Mike Pompeo, by Congressional leaders, and the U.S. media, are totally contrary to President Trump’s strongly asserted respect for China, and for Chinese President Xi Jinping in particular. The Munich Security Conference from Feb. 14-16 saw Secretary of State Mike Pompeo, Esper, and Speaker of the House Nancy Pelosi (fresh from her failed effort to remove Trump from office) rant against China as a threat to “our way of life.” And yet President Trump, as recently as Jan. 21 at the Davos Economic Forum, said of China: “Our relationship with China has probably never been better.” He added that his relationship with President Xi Jinping was “an extraordinary one. . . . He’s for China, I’m for the U.S., but other than that we love each other.”

Duterte vs Obama and the War Party

Duterte was elected President of the Philippines as part of a global revolt, which began in 2016, against the destruction of sovereignty by the British imperial financial oligarchs, sometimes called the “Washington Consensus.” This revolt included the Brexit vote in the UK, as well as Duterte and Trump’s elections that same year.

The previous government in Manila, under President Noynoy Aquino, was the darling of the Obama Administration, serving as a colonial tool for the Obama “Pivot to Asia”—the encirclement of China and Russia’s Far East with a massive nuclear military capacity—while the Aquino government picked a fight with China over sovereignty issues in the South China Sea. The Philippine economy remained the “sick man of Asia” under the Washington Consensus, dictating that there be no infrastructure or industrial development, only raw materials extraction and colonial-style “call centers,” wasting the talents of bright young Philippine youth by having them work all night to service Americans with computer problems and the like. On top of that, the drug crisis was destroying the minds and the health of millions of Filipinos.

Duterte, a long-time Mayor of Davos City in Mindanao, with a reputation for having cleaned up the criminal drug gangs and building the city, was swept into office by a groundswell of rage against the “yellows”—which was the color of the “color revolution” that had brought Aquino’s mother to power after the U.S.-orchestrated coup against nationalist leader Ferdinand Marcos in 1986. Duterte not only launched an all-out war on drugs, much to the disgust of the drug-legalizers like George Soros, but he also immediately told Barack Obama to go to hell and take his efforts to use the Philippines as a tool to start a war with China along with him. Duterte travelled to both China and Russia, joining in China’s Belt and Road Initiative, bringing infrastructure development and military aid to the impoverished nation.

He made clear that he would have no part in a military confrontation with China and negotiated a policy of joint China-Philippines development of the oil and other resources in the contested areas of the South China Sea (now called the West Philippine Sea in the Philippines). He insisted that the Philippines should no longer be a staging ground for U.S. plans for military confrontation with China, but did not act to shut down the bases at that time. 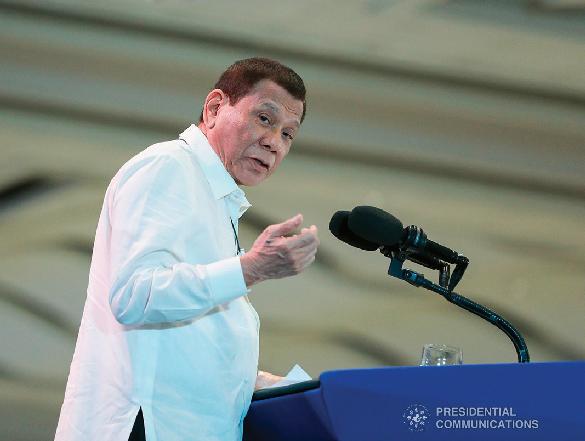 Duterte’s relations with the U.S. were restored when President Trump came into office, supported Duterte’s war on drugs, and made clear that he had no objections to his establishment of good relations with Russia and China. When ISIS-linked terrorists seized the city of Marawi in Mindanao in 2017, Duterte welcomed the logistical support offered by U.S. military forces in the region for the fierce battle waged by the Philippine military forces.

But the same individuals and institutions undermining Trump’s presidency within the U.S. continued to demonize Duterte, both for his war on the drug scourge, and for his refusal to allow the neocons to use his nation to provoke a crisis with China in the South China Sea.

This was aggravated when the U.S. Congress imposed sanctions on individuals in the Philippines under the absurd “Global Magnitsky Act,” an anti-Russia bill that the human rights mafia in the U.S. (from both parties) uses to punish anyone it chooses to, from any country, by simply claiming “human rights” offenses. In the Philippine case, a bill by Democrat Senators Richard Durbin and Patrick Leahy was passed in December 2019, imposing sanctions on “anyone” involved in the detention of Aquino’s Justice Secretary, Leila de Lima, who was arrested for taking drug money. Duterte banned the two U.S. Senators from entry to the Philippines, and denounced their attack on his nation’s sovereignty. 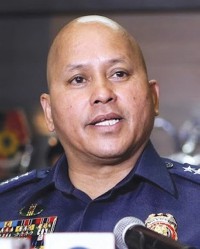 The last straw came in January, when the State Department revoked the visa of former Police Chief Gen. Ronaldo “Bato” dela Rosa. While the State Department gave no explanation, it has been assumed it was due to his leadership of Duterte’s war on drugs, claiming that the people killed in the war were “extra-judicial murders” by police.

Now they won’t let Bato go to America. I am warning you, if you don’t do the correction there: One, I will terminate the bases, the Visiting Forces Agreement, I will end that son of a bitch. I am giving the American government one month from now.

But Duterte made it clear that he does not blame President Trump. In an interview granted to RT on January 23, he said that the U.S. was treating the Philippines as a “vassal state,” while Russia and China respected Philippine sovereignty (an irony, since the neocons accuse China of breaching Philippine sovereignty in regard to the South China Sea, but have no qualms about imposing sanctions on the Philippines when the government refuses to do their bidding). In regard to the de Lima case, Duterte said she “got money for drugs,” and that his country was able to “dispense justice” on its own.

When the RT reporter implied that Trump had imposed the sanctions, Duterte corrected him, first repeating that it was the “son of a bitch” Obama who attacked him for the war on drugs, adding: “I would never say that about President Trump. Trump is a nice person—it’s just his style of doing things. I do not believe he really wants war.” 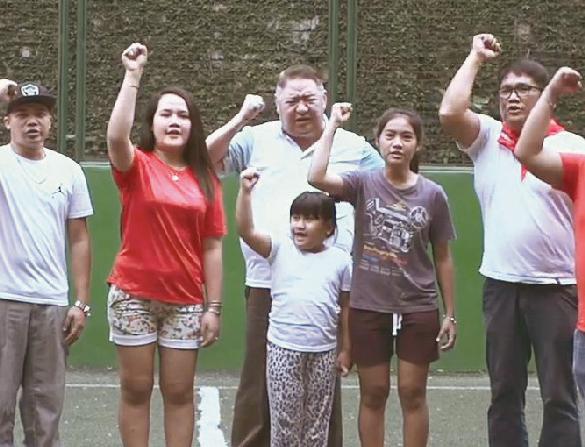 Although it is not in the international news, there is a second reason the New York-London financial oligarchy hates Duterte. In the decades following the 1986 coup against Marcos, who had brought nuclear power and industrial development to the country, the development process was shut down by Wall Street “advisers.” The nation’s water and electricity utilities were privatized. That resulted in the Philippines having some of the highest electricity and water rates in Asia, as well as regular blackouts and even long stretches without water in Metro Manila. In a 2001 article, “Philippines Patriots Battle Piratization of their Energy System,” EIR, working with Antonio “Butch” Valdes, the leader of the LaRouche Society in the Philippines, exposed the scam and warned the nation of the drastic consequences that would be the result.

In November 2019, the oligarchical families that owned the two privatized water companies used the courts to demand a huge gift from the government, supposedly to make up for “lost profits” because the government had refused to allow rate hikes. Duterte not only rejected the extortion, but threatened to jail the oligarchs. This month, he escalated the fight, demanding that the privatized companies return some of their undeserved profits over the years to the people: “Where is the money of the average Filipino who is having trouble paying,” Duterte said, “who pays his water bill, and has to pay because if it will be cut off, it would give him a lot of headache. . . . Give us back the money. Give it to the people and maybe we can talk about solving your problems.”

He added that if the companies shut off the water for lack of payment, “I will just take over and nationalize water in the Philippines. I have plenty of soldiers.”

This fight is being waged among the public by Butch Valdes and the new party he founded last year, the Katipunan ng Demokratikong Pilipino (KDP). Valdes is also calling for the re-nationalization of electric power production and distribution, as well as the repair of the mothballed Bataan Nuclear Power Plant, to restore the nation’s economic sovereignty.