President Trump Speaks Out on the Unjust Trial of Roger Stone

Excerpts from the remarks made by President Trump at the Hope for Prisoners Graduation Ceremony, in Las Vegas, Nevada on February 20, 2020.

Before we go any further, I want to address today’s sentencing of a man, Roger Stone. Roger Stone. He’s become a big part of the news over the last little while. And I’m following this very closely, and I want to see it play out to its fullest because Roger has a very good chance of exoneration, in my opinion. [Applause.]

I’ve known—and you people understand it probably better than anybody in the room. I’ve known Roger Stone and his wife, who’s really a terrific woman, for a long time. And Roger is definitely a character. Everybody sort of knows Roger. Everybody knows him. And most people like him. Some people probably don’t, but I do and I always have. He’s a smart guy. He’s a little different. But those are sometimes the most interesting. But he’s a good person. His family is fantastic. He’s got a fantastic family. And there’s always a reason for that, isn’t there?

Roger was never involved in the Trump campaign for President. He wasn’t involved. I think early on, long before I announced, he may have done a little consulting work or something, but he was not involved when I ran for President. And he’s a person who, again, he knows a lot of people having to do with politics. His whole life is politics. That’s what he is. 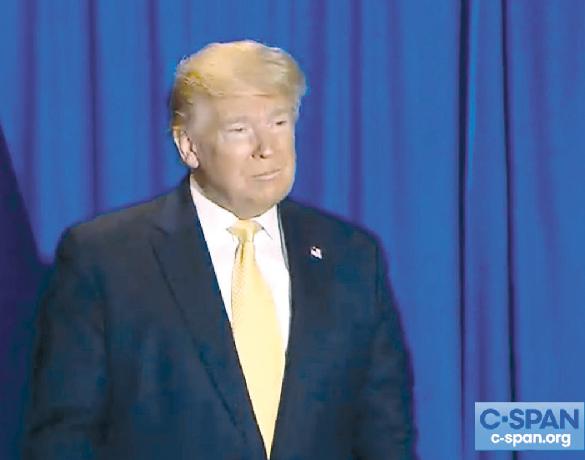 And it’s my strong opinion that the forewoman of the jury—the woman who was in charge of the jury—is totally tainted. When you take a look, how can you have a person like this? She was an anti-Trump activist. Can you imagine this? [Laughter.] Now, you wouldn’t know about a bad jury. Anybody here know about bad? No? [Laughter.] These people know more about bad juries than everybody here, including the sheriff and the mayor and everybody. [Laughter.]

They know about bad juries. We’re not going to say it too much, so let’s not say it in front of more cameras than this. [Laughter.] But you’re my experts, okay?

No, but this is a woman who was an anti-Trump person, totally. Now, I don’t know if this is a fact, but she had a horrible social media account. The things she said on the account were unbelievable. She didn’t reveal that when she was chosen.

And she’s, I guess, from what I hear, a very strong woman, a very dominant person, so she can get people to do whatever she wants. And she got on, and then she became the foreperson, forewoman, on the jury. And I assume they asked her a question: “Do you have any bias? Do you have any. . . .” She didn’t say that. So is that a defrauding of the court? You tell me.

But does this undermine our fair system of justice? How can you have a person like this? Did she delete her social account? And when Roger was determined by the same jury to be guilty before the judge issued a sentence—and he was determined to be guilty—and she started going a little wild. She’s very happy. And she started saying things that people said, “That’s strange. That’s strange.” And then they started looking at it, and how can you have a jury pool tainted so badly? It’s not fair. It’s not fair.

And, you know, it’s not happening to a lot of other people, because you could—look, I won’t name names, but everybody knows who I’m talking about. What’s happening over there? Nobody, nobody.

There are people that are even in Roger Stone’s basic business of politics that were going to be in big trouble. Well-known people. The biggest people. Big trouble. They were forced to leave their firm.

And I’m here to make a fair system. Again, Roger is not somebody who worked on my campaign. I know Roger, but a lot of people know Roger. Everybody sort of knows Roger. And what happened to him is unbelievable. They say he lied. But other people lied too. Just to mention, Comey lied. [Laughter.] McCabe lied. Lisa Page lied. Her lover, Strzok—Peter Strzok—lied. You don’t know who these people are? Just trust me, they all lied. [Laughter and applause.]