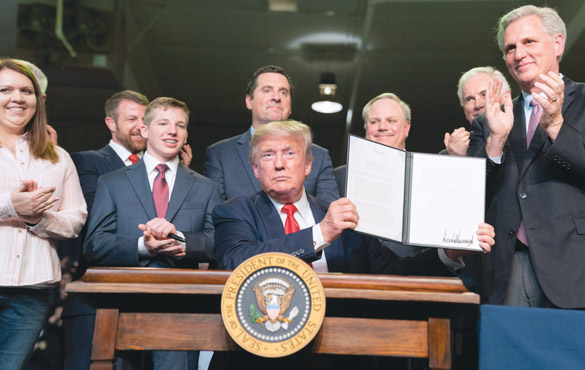 Feb. 21—President Trump’s visit to the fertile Central Valley in California was part of a four-day western states trip. On February 19, he spoke at Meadows Field Airport in Bakersfield to a mostly agriculturally oriented audience of 2-3,000; met with members of the region’s Congressional delegation to review his Administration’s accomplishments to date in improving the supply and delivery of water to California farmers and others; and discussed what more is to be done.

Trump had visited Bakersfield during his 2016 campaign, and at that time had promised that he would ensure that farmers had access to the water they needed. California was in the midst of the worst drought in its recorded history and its farmers were battling the state government and environmentalists for water. A three-inch bait fish, the Delta Smelt, was dominating the headlines. Water was being allowed to empty into the San Francisco Bay, rather than being routed to aqueducts to provide water for farms and homes further south.

In his visit to Fresno in the southern part of the valley in 2016, candidate Trump promised that he would “open up the water” for farmers. He denounced as “insane” the environmental rules that prioritized fish over farmers.

For this return visit, the White House announced that the President would be “speaking with hardworking farmers in the Central Valley about efforts to dramatically improve the supply and delivery of water in California and other Western states.”

We need the security of our food supply. Making sure that it’s grown in America, that it’s safe, and secure. We have a real concern in California because we send most of our water out to the ocean [instead of] sending it down to Southern California, to our farmlands in the San Joaquin Valley, and others.

This President has worked greatly, using science—not based on politics—but on science, to allow more of that water to stay with the Californians, and for America, to make sure we’re secure in our food supply as we move forward.

USDA
When provided with sufficient water, California’s Central Valley is one of the most fertile in the world. Shown: an aerial view of a pistachio farm in Showchilla.

FWS/ B Moose Peterson
The Delta Smelt, a bait fish that is native to the Sacramento-San Joaquin River Delta region of northern California.

In an email, California Assemblyman Vince Fong praised U.S. Rep. Kevin McCarthy’s efforts on behalf of Kern County farmers in response to a question about the President’s visit:

The Central Valley can only continue to be the breadbasket for the rest of the nation if our local farmers have access to water. The public expects our elected representatives to do what is in the best interest of the communities they serve, and I believe the arrival of the President of the United States to our community represents just that.

In Bakersfield, joined by Secretary of the Interior David Bernhardt, Congressman Kevin McCarthy, and other federal officials, President Trump did more than talk. Just as the state may again be entering the first months of a new drought, he signed a “Presidential Memorandum on Developing and Delivering More Water Supplies in California,” supporting more water development and delivery in California, and reworking environmental rules involving the pumping of water from the Sacramento-San Joaquin River Delta, the inland delta on the western edge of Central Valley.

With little precipitation in January and virtually none thus far in February, there remains but another six weeks of the normal rainy season to make up for this very dry winter. The press is filled with articles asking if a new drought is about to begin. That may be; we shall see in the next two months.

Paralleling the visit of the President to the Central Valley, Secretary Bernhardt, joined by Congressman Devin Nunes (R-Tulare), delivered a speech to the California Water Forum in Tulare on February 18, about the current regulations related to species protection and how to “waste less water,” sending more to the canals that go south to the farmers and the people of Southern California.

Bernhardt said that federal agencies would now use real-time monitoring of the endangered Delta Smelt and would only slow water flows if necessary, but would no longer rely simply on the calendar:

We will be utilizing the best science . . . and we will be able, we believe, to be much more efficient in these operations. I think you are going to find out tomorrow that the President doesn’t think we are done. This is step No. 1 to create room to run.

There is no question that this administration is determined to streamline regulations and accelerate the approval of projects, as has been done with regard to the flow of water to the Delta and Southern California. 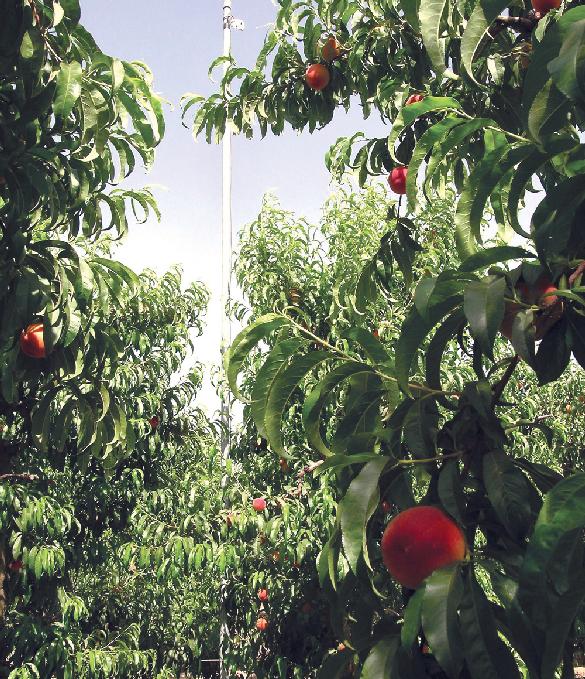 USDA-ARS/Dong Wang
The San Juaquin Valley area of the Central Valley produces the majority of U.S. agricultural production (by dollar value) that comes from California. Shown: a lush peach-tree orchard.

In 2014, two years before Trump was elected, California voters approved a ballot measure which provided more than $3 billion to build new water infrastructure. Today, six years later, not one penny of that money has been allocated for such projects. The President has repeatedly challenged state leaders to get to work to ensure adequate water supplies for the nation’s most productive agricultural land—land that provides more than half of the nation’s vegetables, fruits, and nuts. Perhaps the state’s leaders should learn a lesson from the President on how to streamline needed projects to get them done.

In October 2018, the President signed a wide-ranging bill to improve the nation’s water infrastructure, including adding water storage in California’s San Joaquin Valley. America’s Water Infrastructure Act of 2018 authorized more than $6 billion in spending over 10 years for projects nationwide.

President Donald Trump’s Fiscal Year 2021 budget proposal will fund multiple Sacramento District projects (Northern California) with several hundred million dollars in his plan for the U.S. Army Corps of Engineers civil works program. This is in addition to the more than $1 billion he provided in 2018.

• In October 2018, Trump signed a “Presidential Memorandum on Promoting the Reliable Supply and Delivery of Water in the West,” prioritized the review of the Central Valley Project and the State Water Project, and directing the Secretary of the Interior to issue a plan of action by the end of January 2019. These are the two main systems delivering water to Valley farmers, that would allow the bringing of more than 1 million acre-feet of water to the Central Valley.

• In February 2019, the U.S. Bureau of Reclamation released the “Biological Assessment on the Long Term Coordinated Operation of the Central Valley Project and State Water Project,” completing an assessment advocated by Congressman Kevin McCarthy. This is important in updating various regulations governing water supplies in California, including exports from the Sacramento-San Joaquin River Delta to communities in the Central Valley and Southern California.

• In October 2019, a new “Federal Biological Opinions and Proposed Action” continued to reflect the President’s commitment to helping California’s communities and farmers succeed.

And, in fulfillment of Executive Order 13788 (“Presidential Executive Order on Restoring the Rule of Law, Federalism, and Economic Growth by Reviewing the ‘Waters of the United States’ Rule”), the “President’s Navigable Waters Protection Rule,” finalized last month, dramatically limits the scope of environmentalist protections for the nation’s waterways, excluding many smaller bodies of water, including seasonal ones, from federal oversight. This overturns an Obama administration rule that, as farmers rightly complained, regulated even mud puddles. The President had promised to do just that in his 2016 campaign, calling it “one of the most ridiculous regulations of all.” The farmers had charged that the Obama Rules were such that even small bodies of water on their property were subject to federal regulation.

For those unfamiliar with the California water management system, two huge projects—the Central Valley Project and the California State Water Project—move water from the north of the state, through hundreds of miles of canals, pumps, and dams more than 400 miles to the farms of Central Valley and as far south as San Diego. Until China built its Move South Water North project, the California system, completed in the early 1970s, was the largest and most complex water management system in the world. That virtually nothing has been built since, is the root of the state’s water problems today.

Trump’s four-day western states trip also included giving the Commencement Address at the Hope for Prisoners Graduation Ceremony in Las Vegas [see excerpts from Trump’s remarks to that event in this issue] and a campaign rally, also in Las Vegas. He attended fundraisers in Los Angeles and also made fundraising stops in Colorado Springs, Colorado, and Phoenix, Arizona, on his way back to Washington.

‘Mini-Mike’ Is Persona Non Grata with California Farmers and Trump

In his February 19 dialogue with farmers in Bakersfield, California, President Trump and several of the farmers spoke out against Mike Bloomberg’s disdain for the intelligence of American farmers—called “gray matter” by Sir Michael Bloomberg.

Responding to citrus farmer Matt Fisher, who thanked him for defending farmers, the President remarked:

You have to know that this meeting . . . was set up long before—Devin [Rep. Devin Nunes] and Kevin [Rep. Kevin McCarthy] set it up long before we heard that Mini-Mike hates the farmer. Long before we learned about his hatred of the farmer, disrespect of the farmer. So I don’t know—I don’t think he’s going to be the candidate anyway, to be honest with you. We’ll have to start working on Crazy Bernie pretty soon. But it was set up a long time before that.

Another farmer, Larry Starrh, described water as a life and death matter and effusively thanked the President for acting to ensure adequate water supply for the Central Valley—referring to Trump’s actions to ensure that water flows to agricultural sectors, rather than running off into the Pacific Ocean. He said:

Well, I’m no expert, and I know a certain Democratic presidential candidate who says farmers need more gray matter. You know that. Yeah. [booing] But this ain’t rocket science. The reason we’re seeing these new rules implemented is because of President Donald Trump. And I want to publicly thank you, sir, and ask you to please keep fighting for us. Thank you very much.

For his part, Trump commented:

For too long, authorities have needlessly flushed millions and millions of gallons of fresh, beautiful clean water from up north, straight into the Pacific Ocean. It’s nothing for the Pacific Ocean. . . . But it can help us to a level that nobody can believe. On the basis of old science, obsolete studies, and overbearing regulations that had not been updated in many, many years, and sometimes for decades.

The resulting miscalculation and misallocation of water helped turn natural droughts into man-made catastrophes. I mean, it’s really a catastrophe, when you think. You have farmers that own land that are paying taxes on the land that aren’t allowed to farm your land. Going forward, well use the latest science and most advanced technology to monitor and adjust water distribution in real time, ensuring that the environment remains protected while directing as much water as possible, which will be a magnificent amount—a massive amount of water—for the use of California farmers and ranchers and all of these communities that are suffering from a lack of water.