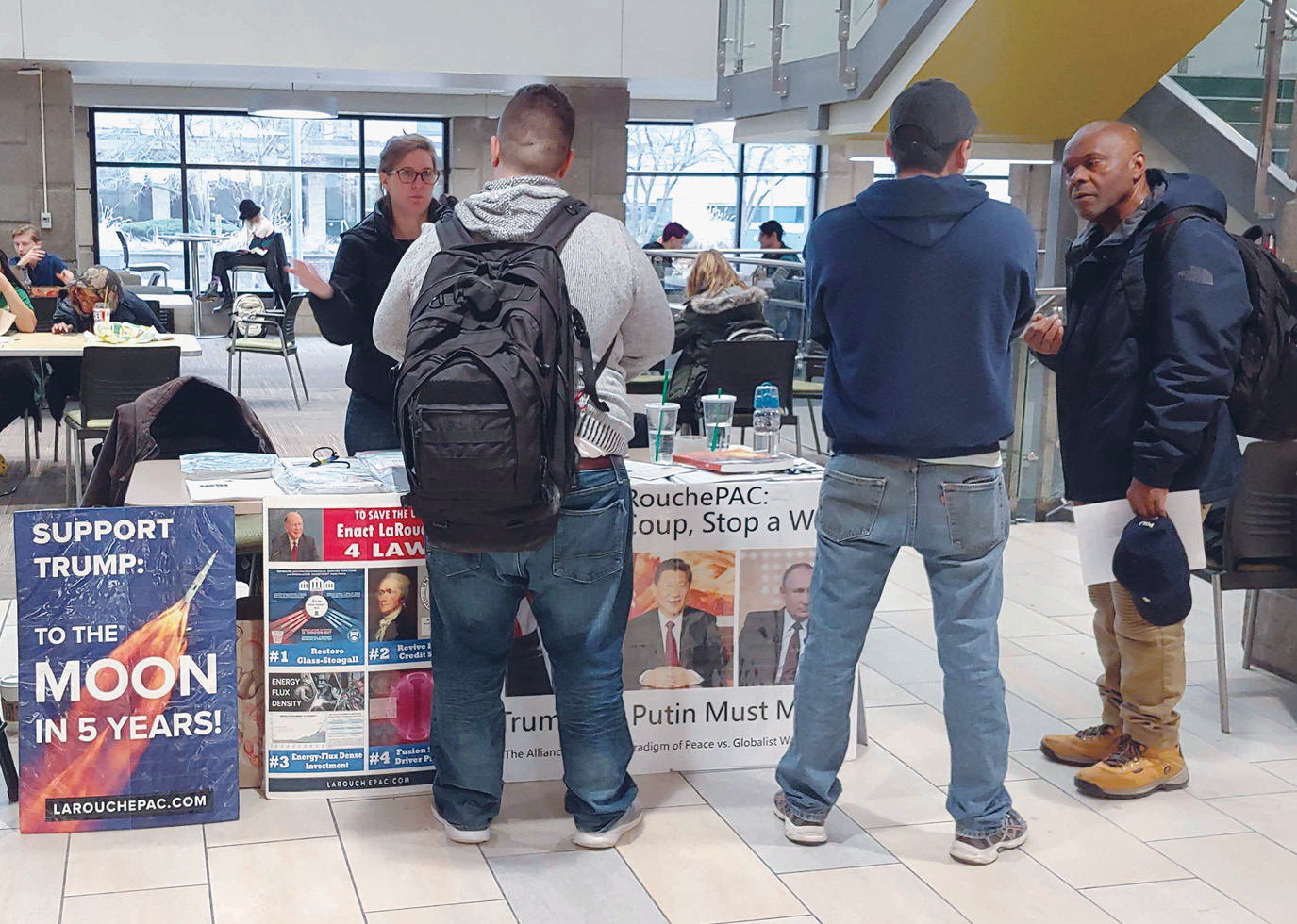 March 1—On February 18, two members of the Michigan LaRouche movement traveled to the State Capitol in Lansing, to meet with state legislators and encourage them to support Lyndon LaRouche’s “Four Laws for Economic Recovery.” The particular focus was on LaRouche’s fourth law, the need for revolutionizing America’s economic platform with accelerated investments in space and in thermonuclear fusion research.

As their morning meetings progressed, they discovered that the Michigan Aerospace Manufacturing Association was holding a press conference in another part of the State Capitol to announce the site selection for a proposed horizontal space launch facility, which will use Michigan’s northern location to launch satellites into low earth polar orbit. Reportedly in the works are announcements of a second vertical launch facility and a command center, at two additional sites in the state. Throughout the day, the LaRouche organizers found tremendous excitement over Michigan’s growing role in the space program, and great interest in exploring the transformative impact of thermonuclear fusion on the nation’s economy.

Under the presidency of Donald Trump, the United States is in the midst of a profound political upheaval, as the ossified two-party system disintegrates. But that realignment must be matched by an economic revolution, one that throws off the death-grip of monetarist policies and returns to the American System of physical economic production, as developed with scientific rigor by Lyndon LaRouche.

America’s industrial Midwest is at the epicenter of both realignments, with Michigan as ground zero.

In 2016, Trump won his upset victory by taking key Midwestern states, based on winning over the “forgotten men and women” among independents and blue-collar voters. These were (and are) the layers that have been abandoned by the green and politically-correct ideology of the Democratic Party and by the Wall Street and neo-con ideology of the establishment Republican Party. In that election, traditional blue-collar and African-American Democrats either switched to Trump or stayed home. The low voter turnout in the city of Detroit was one of the main reasons for Hillary Clinton’s loss in Michigan. In addition, Trump won that stunning victory in Michigan with almost no help from the state Republican Party. The Trump campaign had to run the equivalent of guerilla warfare against the Republican establishment. 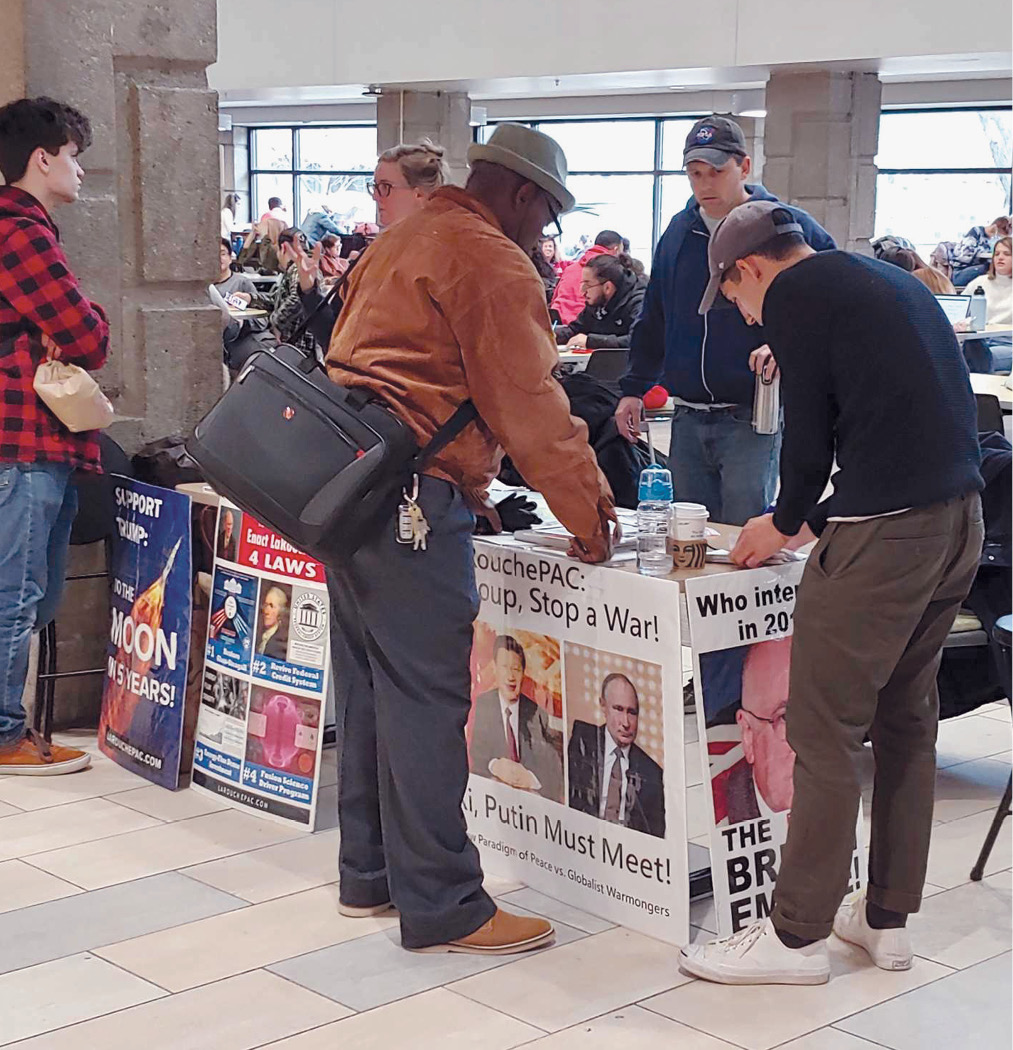 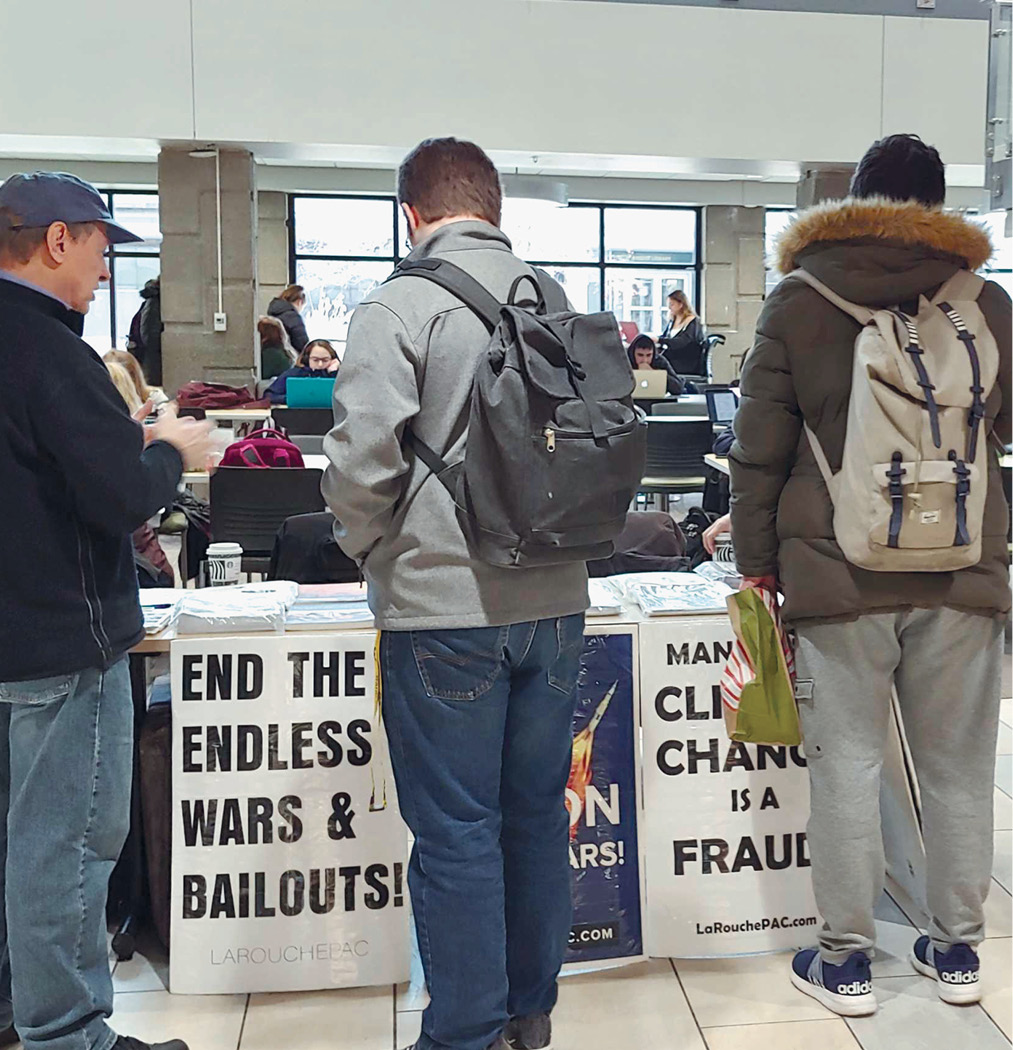 With 2020 upon us, the ongoing fracturing of the two-party system proceeds apace. The Democratic Party is being shredded by competing factions: a shrinking old-line Democratic machine, oriented more toward traditional economic and social policies; the George Soros, hard-core left/environmentalist/identity politics operation (which now plays a dominant role in the state Democratic Party), and Mini-Mike Bloomberg’s vast cash-for-politicians machine. Endorsements for the March 10 Democratic Presidential primary are all over the place, with many big labor unions just sitting it out.

Three years of Donald Trump in the presidency has nominally shifted the Michigan Republican Party into the Trump camp, if for no other reason than self-survival. It wants to win in 2020 and ride whatever coattails they can. But there is a deeper process involved, one that Lyndon LaRouche forecast in a prescient speech given in 2012, on the occasion of his 90th birthday. LaRouche declared that the two-party (or potty) system was coming to an end. That is indeed in progress, but the question remains, what will replace it.

Trump, almost single-handedly, is creating a new political alliance by shifting producers, traditional blue-collar workers, farmers, and others, into his movement, which, for the moment, falls under the heading of the Republican Party. One of the more telling scenes from the 2020 State of the Union speech occurred when the President celebrated the “blue collar boom” taking place, to the standing ovation of the Republicans in Congress (most of whom, in truth, don’t give a rat’s ass about blue-collar workers), contrasted to the glum, sit-on-their-hands silence of the Pelosi and Schumer Democrats. In a reflection of that process, one of the vice chairs of the Michigan Republican Party is a working UAW member, and the organization, “Autoworkers for Trump,” has a growing following.

But this political shift will not be durable, if it is not grounded in a fundamental change in the economic policy of this nation. First, it is highly vulnerable to an economic shock and downturn, which may be looming as a result of the impact of the coronavirus on the ready-to-burst-financial bubble. Second, as politically conscious people are asking themselves, what will prevent the even small advances in rebuilding our physical economy from being reversed, when Donald Trump is no longer the president?

Look at the two biggest political realignments in American history. Abraham Lincoln’s Presidency created the Republican Party, a new alliance of producers from among labor, farmers and entrepreneurs and arrayed against the Wall Street/London run Democratic Party and its slave-holder base. Despite Lincoln’s assassination in 1865, the nation-building policies he set into motion carried the economy forward until the 1901 assassination of President William McKinley. Then, for the first three decades of the last century, the American people were represented by no political party. (Sound familiar?) 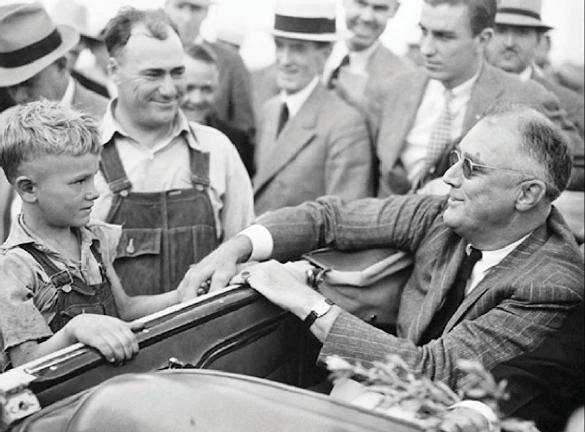 LoC
President Franklin Roosevelt brings hope to a drought-stricken farmer and his son in North Dakota in 1936.

In 1932, Franklin Roosevelt did the same thing that Lincoln had done. By challenging Wall Street and fighting for the “forgotten man,” he brought labor, minorities and farmers over from the Republican Party and put the country back to work, culminating in a war mobilization which saved the planet from Hitler. With FDR’s death in 1945, the Democratic Party fell back into the hands of Wall Street and the British.

It is up to the citizens of the United States, or the citizens of any nation, to master the principles of physical economy, such that they are able to make the political decisions which will make economic progress permanent. 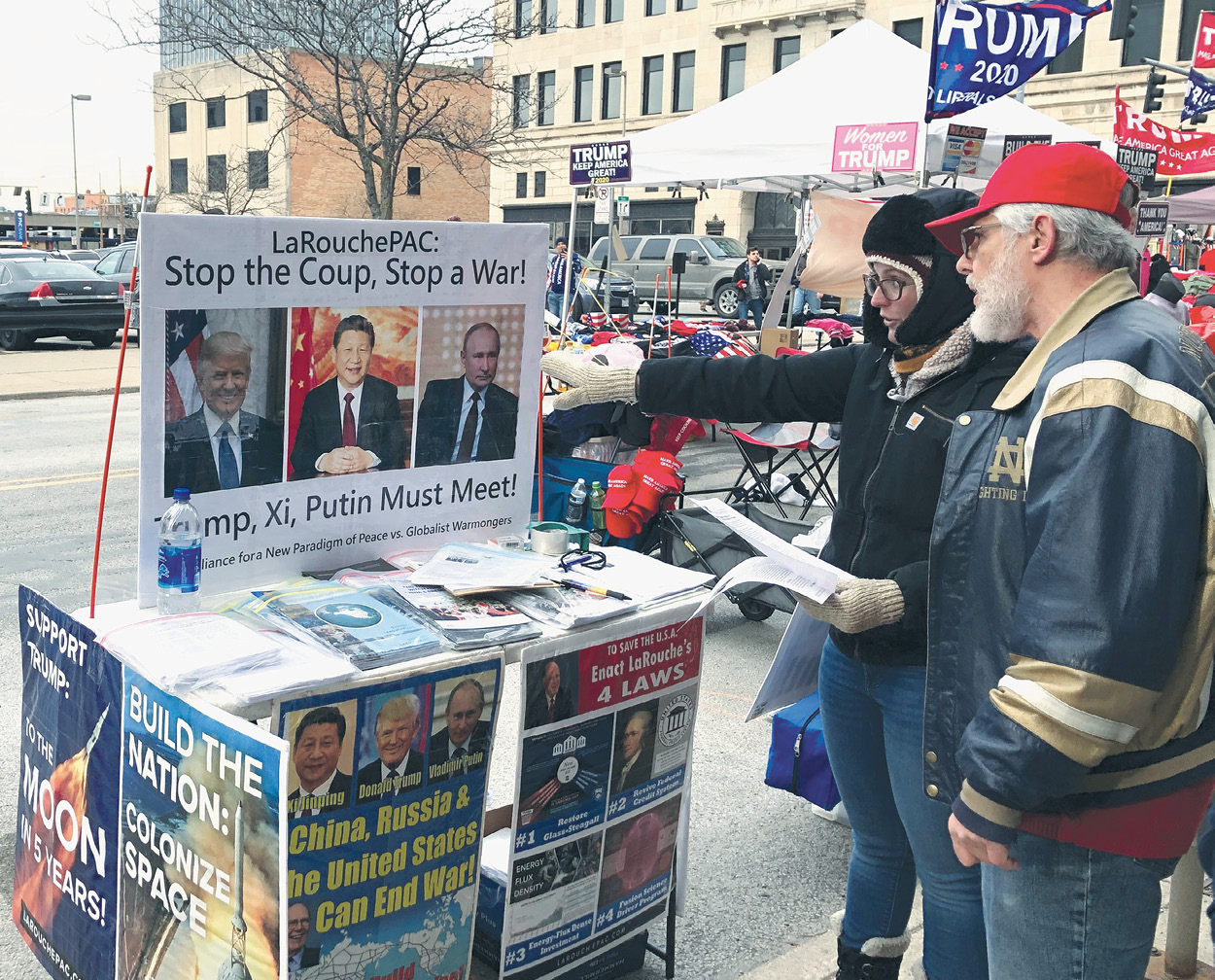 EIRNS
An organizer at a LaRouche PAC literature table, during a Trump Rally at the Huntington Center, Toledo, Ohio, on January 9, 2020.

This has been the mission of the LaRouche movement, in Michigan and in the Midwest, since its inception—but now, since 2017, it is being received with increasing resonance.

Watching the loss of two Republican Congressional seats in 2018 (which Mike Bloomberg just boasted that he caused) and an across-the-board defeat of Republicans in state-wide elections, LaRouche organizers intensified their organizing in the political arena with one message, “nothing is secured, until we have a new financial architecture based on Lyndon LaRouche’s Four Laws.”

One particularly ripe area of organizing has been outside the enormous rallies which President Trump has held throughout the Midwest. Organizers have travelled to every rally within reach—in Michigan, Ohio, Kentucky, Indiana and Wisconsin—distributing thousands of leaflets and making scores of contacts at each one. The message has always been the same: “the attacks on the President will not stop, until you use LaRouche’s policies to take the power away from the globalists,” or “the danger of war will not abate until we destroy the British Empire with LaRouche’s Four Power alliance.” The deep legacy of Lyndon LaRouche in this region has surfaced at the rallies, with recognition and respect rippling throughout the crowds. 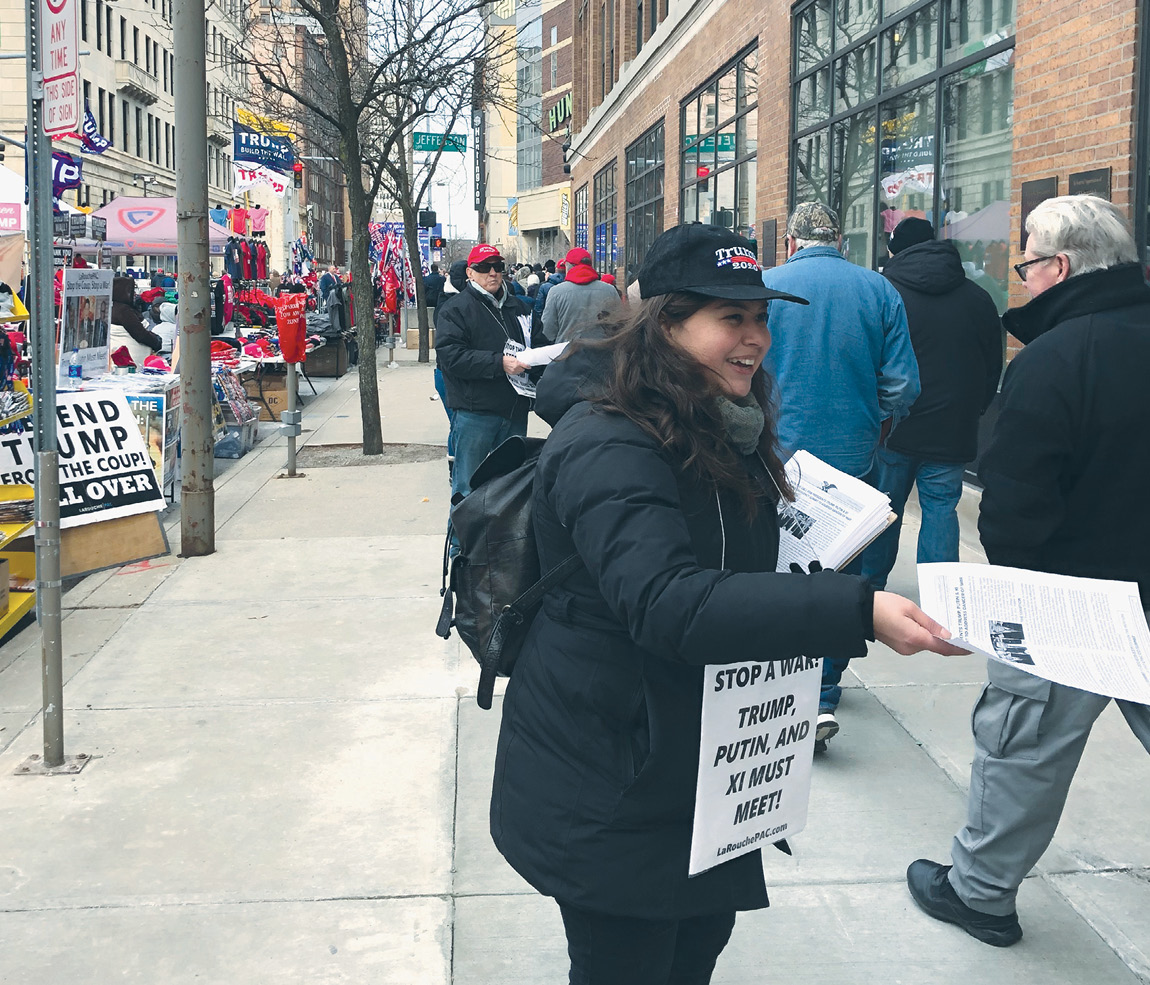 EIRNS
LaRouche PAC organizer informs passers-by of the urgency for a Trump-Xi-Putin summit during a Trump Rally in Toledo, January 9, 2020.

Over the past three years, LaRouche activists have attended hundreds of smaller rallies or political meetings, demanding that the newly politicized layers lift themselves above the hot button issues pushed by the parties and the media and, rather, understand that the war to be won is for a new economic system, based on LaRouche’s policies. Over the recent months, growing numbers of declared Congressional candidates have sat down with LaRouche organizers for in-depth discussions on LaRouche’s policies.

The process of building Committees of Correspondence to recruit the necessary leadership for a growing mass movement is developing. On Saturday, February 29, two dozen activists gathered at a Detroit-area event for a “training session” on LaRouche’s Fourth Law. They were challenged to abandon a monetary conception of economics, and replace it with one based on increasing physical production through constant breakthroughs in science and technology.

For more than two hours, no one budged as they were presented with a rigorous development of LaRouche’s economic “bar diagrams,” a discussion of increasing energy-flux density as manifest in the upshift to thermonuclear fusion, to the idea of Beethoven’s Ninth Symphony as an Apollo Project. Questions ranged from, “Has fusion been held back by the influence of Newton?” to “What is the importance of singing at 432 [vibrations per second]?” The audience was drawn from people met during LaRouche PAC field organizing, from Autoworkers for Trump rallies, from followers of LaRouche spokesman Harley Schlanger on the internet, to people met at local Republican events.

From Low Earth Orbit to the Moon and Mars

There is a productive culture in the Midwest, which has been under attack since the death of JFK. That culture is beginning to stir again, with the potential for President Trump to break free of the globalist system and to work with Russia, China, India and other nations to create a new economic paradigm. That potential for a new economic paradigm shows itself most strongly in the growing role of Michigan industry in the space program. Not only is there the plan to make Michigan a space launch site for low earth orbit satellites, but over 80 Michigan companies are subcontractors to build the different components of President Trump’s Artemis mission to return to the Moon and on to Mars. In true machine-tool fashion, one company alone is contracted to build 100 different components for the new SLS (Space Launch System) booster rocket.

As one activist (and Air Force veteran) recently said, “Now we can build something besides cars!”