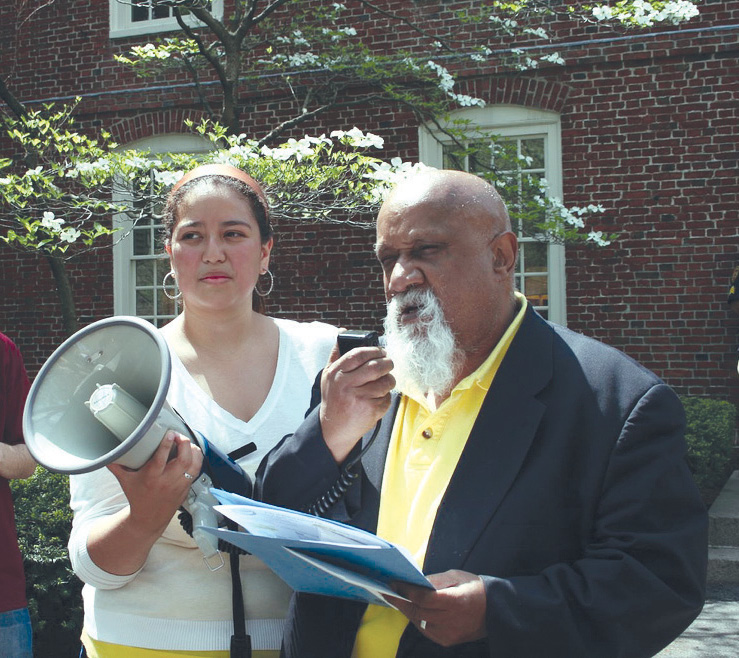 CC/stand4security
Boston City Councilman Chuck Turner speaking to a rally at Harvard University, after being prevented from delivering a letter to the administration signed by eight Boston City Councilors in support of the security guards’ campaign for better wages and fair working conditions on campus, May 10, 2007.

March 6—On Christmas Day, 2019, former Boston City Councilor and legendary community activist Charles “Chuck” Turner passed away at his home in Roxbury, after a long battle with cancer. He was 79.

Born in Cincinnati, Chuck became a community organizer and activist after graduating from Harvard in 1963. Among the many campaigns he led on behalf of the people of Boston were those for the prevention of the planned construction in 1969 of the Interstate 95 corridor running through Boston’s communities of color, as well as through white working-class neighborhoods, and for the 1983 Boston Residents Jobs Policy, which mandated that 50 percent of all employee work hours on large private and all public development projects in Boston go to Boston residents, 25 percent to people of color, and 10 percent to women. He created and led numerous organizations and programs dedicated to economic development, employment, housing, education, social justice, and world peace.

Chuck met LaRouche movement organizers in 1992 at a post office book table on Blue Hill Avenue and subscribed to Fidelio and 21st Century Science & Technology. He would often engage with us in lively telephone discussions of the great ideas and potentialities that Lyndon LaRouche and his associates presented in those publications.

At that time and throughout the 1990s, he was co-director of Emerge, the nation’s first anti-domestic-violence counseling program for men, He was almost always too busy with this important work to participate in our meetings and events, but he endorsed several initiatives of our movement, especially the Exoneration of Lyndon LaRouche. His wife, Terri, attended LaRouche’s Presidential Campaign presentation at Roxbury Community College in 1996. It was a happy surprise when, in the fall of 1999, he showed up for one of the weekly LaRouche activist meetings for the first time and informed the gathering of his candidacy for the District 7 City Council seat. A member of the Green-Rainbow Party, he was elected six times, serving from 2000 to 2010.

In September of 2000, as an early winter of particularly cold weather—and high, rapidly increasing fuel prices—approached, LaRouche issued a memorandum “On the Subject of Emergency Action by Governments to Bring the Present Petroleum-Price Inflation Under Control,” calling for urgently needed actions to be taken to avoid “a chaotic breakdown in many, if not all of the economies of the world,” as a crucial first step in shutting down life-threatening hyperinflation in energy prices, and in the global economy more generally.

On November 1, 2000, in a courageous act on behalf of the citizens of Boston, and of the world, Councilor Turner introduced a “Resolution on Emergency Governmental Action to Reduce Oil and Natural Gas Prices” (excerpted here), explicitly based on LaRouche’s policy statement:

Whereas: The following actions proposed by economist Lyndon LaRouche to deal with that emergency situation contribute an important, and decisive step in the direction of moving the government of these United States to act in concert with other nations to solve the more general problem of the world’s financial and monetary systems. . . .

Therefore Be It Resolved: That the City Council of Boston urges the President of the United States, the U.S. Senate, and the House of Representatives to take emergency action to reduce oil and natural gas prices, including the following measures:

A. Declare a general strategic emergency in the matter of stability of flows and prices of essential energy supplies of national economies;

B. Establish contracts, directly between the U.S. government and the governments of petroleum-exporting nations, of not less than twelve months government scheduled deliveries of petroleum; and

Be It Further Resolved: That the City Council of Boston urges the Government of the Commonwealth of Massachusetts, the Massachusetts General Court, and other state and local governments of the United States to support these emergency actions in the vital interest of the General Welfare of its citizens. 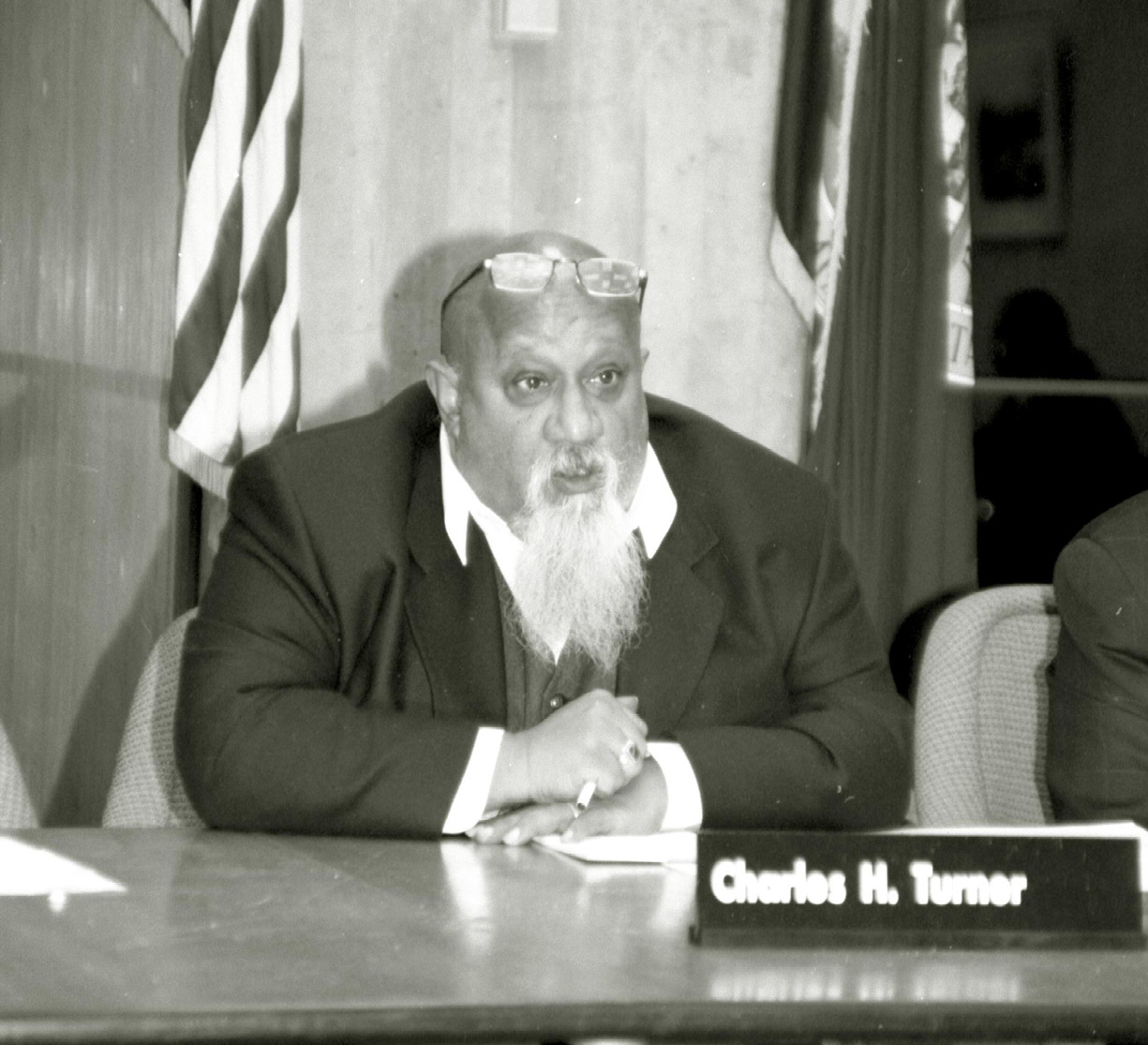 Councilor Turner then co-chaired hearings on December 4, beginning with the disaster that the high oil prices had already wrought on his constituents and noting that there was no shortage of supply, and that OPEC had increased production.

“Production now exceeds consumption, and yet the price continues to rise,” he said, pointing to the City of London and Wall Street’s manipulation of energy spot-market prices, reduction of refining capacity, and the mega-mergers of oil companies.

Extended coverage of the events is available in the article, “Winter of Discontent Begins: Boston Meets on Fuels Crisis,” published in EIR on December 15, 2000.

I had the honor of reading into testimony Lyndon LaRouche’s statement, offered in support of the resolution, which said in part:

Neither Boston, Massachusetts, nor New England as a whole, command the glories today with which they were adorned during the decades I was a child, youth, and young man, living in those quarters of our nation. Nonetheless, there are reasons why decisions made in Boston and its vicinity can still shake the world for the better, and the measure before you, if adopted, is surely, once again, a shot which will be heard around the world.

Under pressure from the Boston financial establishment, and an Anti-Defamation League slander and intimidation campaign, the resolution was defeated 8-3. See “Boston Fails to Act: Its Citizens Will Pay,” EIR December 22, 2000.

In 2007 Chuck was targeted by the Justice Department, indicted in 2008, and in 2010 was convicted of making false statements and accepting a $1,000 bribe from an FBI informant, who had to be compelled by the DOJ to testify against him. In numerous public events, rallies, and interviews, up until his death, Chuck maintained his innocence and railed against the systematic FBI and DOJ persecution of Black elected officials. Throughout, he was supported in this by thousands of his constituents, who also re-elected him in 2009.

Former U.S. Attorney General Ramsey Clark, after one of the hearings in 2008, stood next to Chuck outside the courtroom, condemned the DOJ’s case as “worse than sloppy,” and called for an investigation of the prosecutor. At a packed community support meeting at Roxbury Community College (RCC) a few weeks after his indictment, video excerpts from the 1995 Independent Hearings on Misconduct by the U.S. Department of Justice were presented to give the audience a fuller understanding of Operation Fruehmenschen. He also addressed this persecution on a panel with LaRouche Spokesman Harley Schlanger in 2010. He served 28 months of a three-year sentence and went back to work in 2013, serving his community. 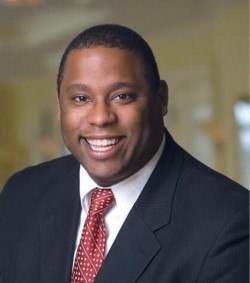 Tito Jackson Facebook page
Tito Jackson, former Boston City Councilor. “What they accused him of taking wouldn’t pay for one month’s rent for his district office.” He evoked a standing ovation, and thunderous applause, saying “Chuck Turner was not a crook.”

Current and former elected officials, community leaders, activists, and friends addressed a crowd of over 500 at RCC in a three-hour memorial filled with stories, tributes, poetry, and music, expressing their admiration, gratitude, and love for Chuck Turner. His City Council successor, Tito Jackson, described Chuck’s decades of selfless service, how Chuck had for years maintained an office for his constituents, closer to their community than City Hall, out of his own pocket, pointing out that “What they accused him of taking wouldn’t pay for one month’s rent for his district office.” He evoked a standing ovation, and thunderous applause, when he said, “Chuck Turner was not a crook.”

In their remarks, a local labor activist and a Chinatown development director illustrated his dedication and determination, recalling two meetings Chuck participated in on December 17, just eight days before he died.

One of the moderators of the memorial reported that Chuck’s wife had asked him what his wishes were for his memorial service. At first, he said that he did not want there to be one. But as she insisted on an answer, he said that he wanted there to be music, “a gospel singer. Anything but Amazing Grace.”