The State of PlayFollowing Super Tuesday 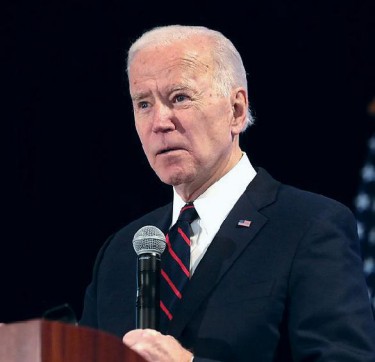 March 5—What we just saw on Super Tuesday, the so-called Biden miracle, requires a certain degree of madness to decipher. In other words, you have to put yourself in the shoes of those who have not fled the hair-on-fire insanity of the Democratic Party and explore their thinking. Yes, there was a huge mobilization of the apparatus Bloomberg had built in the Southern states, coupled with a mobilization of the extant Clinton and Obama and Bush machinery there, to suddenly get behind Biden; and yes, the media provided the Biden miracle narrative as cover; but that was only part of the picture.

The overriding dynamic is the hatred and fear of this President, created from the coup, exacerbated at this point by the uncertainty surrounding the coronavirus. Think about how crazy they are—Chuck Schumer going to the steps of the Supreme Court and directly threatening two justices. Some think, in a delusion, that they can somehow hide Joe Biden’s dementia and get him a Vice President who will reassure the public while continuing to inflame broad sectors of the public with the notion that anything, anyone, is better than Trump. 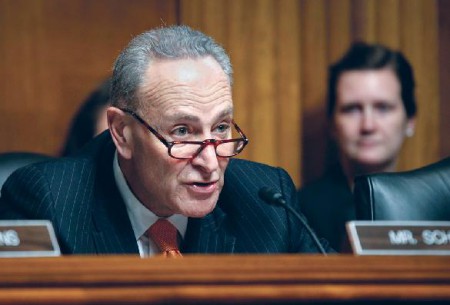 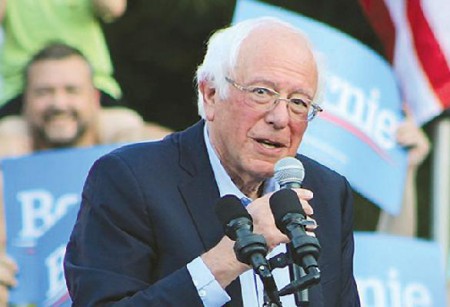 Should Biden win, it will be a fascist government of national unity, in which dopey Joe plays only a minimalist ceremonial role. More likely, the continued fragmentation of the Party between the Biden establishment and the Sanders forces will result in a brokered convention in which a new candidate emerges, or, prior to that, a new candidate may actually enter the race.

Within the elites, the clearer-eyed conviction is that this President has been trapped by the necessity of holding Republicans in his coalition for purposes of winning re-election and cannot take the bold steps which will be necessary in an economic contraction. They intend to inflame public fears around the virus and economic contraction in order to defeat Trump.

This is where we come in to the picture. We have successfully educated large sections of the Trump base, independents, and people on the nominal left about the nature of the national security state. And mass strike conditions within these populations continue now. But most, if not all, of the same people are absolutely ignorant about LaRouche and his economic discoveries and programs, and absolutely ignorant about the economic and scientific solutions which can get us out of this decadent descent. They continue to react and revolt but lack the ability to articulate the solutions. The fake narrative being sold to the population is that this election is a contest between something called “socialism” and something called “capitalism.” And that fake narrative is just as bad, or worse, than the claim that the Russians hacked the DNC.

They have no knowledge of the unique characteristics of the American System of political economy, the real invention which can be said to have been “made in America,” albeit with the best of European philosophical parts. It is completely different from British neo-liberalism, which is the actual content of Bernie Sanders’s democratic socialism, as he keeps saying, or the predatory rentier finance capitalism of Adam Smith, David Ricardo, Ayn Rand, and Milton Friedman, the dominant economics of both the Democratic and Republican establishments. And they need to be educated about the concrete features of the American System and the methods of thinking employed by LaRouche, and educated fast.

Susan Kokinda recently pointed out that most have no idea that they are living in an economic system deliberately created in the aftermath of the destruction of the Bretton Woods system. But LaRouche understood, immediately, the consequences of that destruction and fought all his life for the solutions which it is now possible, given the mass strike conditions in the population, that we can impose, if we lead.

I am writing a series now for EIR meant to make this concrete for people. Michael Bloomberg’s New York City is my laboratory for demonstrating to people what happened post-9/11 to the United States—in education, healthcare, city building and housing, the environment, and culture. Once you look at these areas—not as the single issues, which is the way they are paraded to the public—but as aspects of a single, systemic takedown of former living standards, you can begin to map the actual apparatus and people responsible. 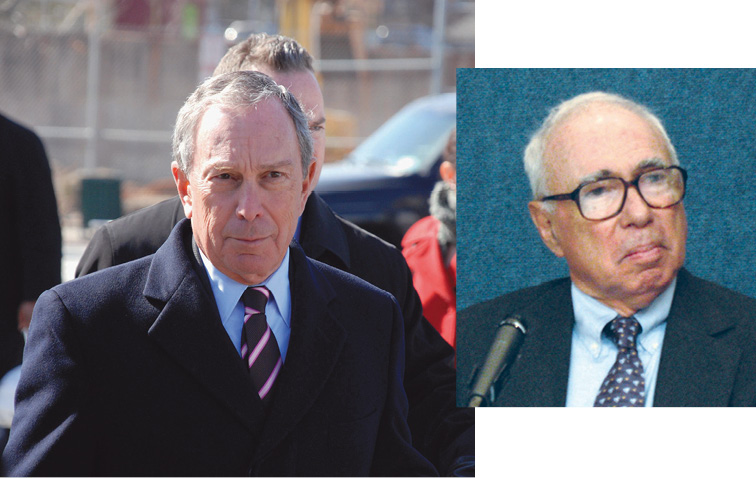 Mike Bloomberg is the protégé of Felix Rohatyn. Bloomberg’s three terms as Mayor of New York simply continued the policies of popular manipulation and profiling, dumbing down of the population, acceptance of wide disparities in income and social class, and colonial policing methods, which LaRouche detailed during New York’s 1975 financial crisis, and which he fought throughout the remainder of his life.

To cite but one example: 20 hospitals closed in New York City under Bloomberg’s reign. That was partly the result of President Barack Obama’s and Ezekiel Emanuel’s huge cuts in Medicare and Medicaid reimbursement rates. It was also the result of two commissions chaired by Stephen Berger, former executive of the Emergency Financial Control Board and veteran of Nelson Rockefeller’s Commission on Critical Choices, one under Governor Pataki and another under Governor Cuomo. This was the second stage of the deliberate shrinkage of New York. The first stage occurred, savagely, with the takedown of most neighborhood New York hospitals as the result of the 1970s financial crisis, BIG MAC, and Rockefeller’s prescriptions for the City. This second stage was led by the same people or their heirs, particularly Stephen Berger. 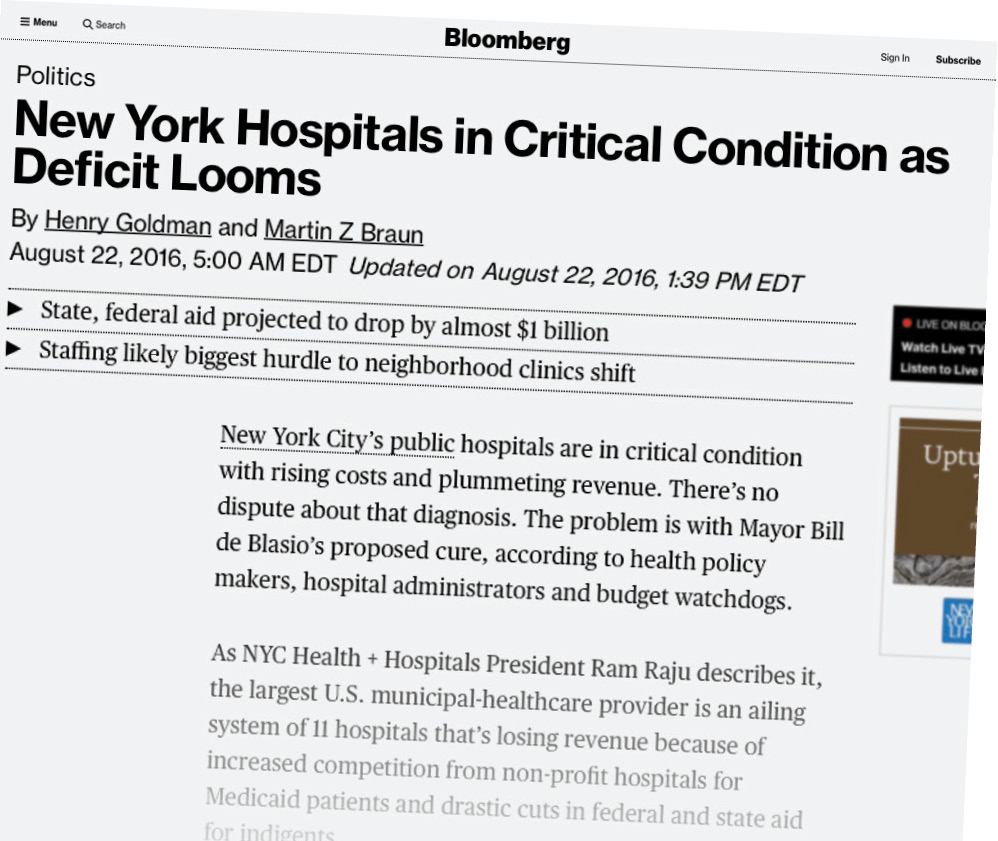 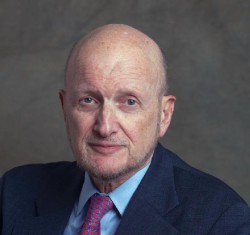 The same holds true in education, where Bloomberg took over the schools and instituted the drill-and-grill testing regimes of George Bush’s “No Child Left Behind” and Obama’s “Race to the Top.” Neighborhood schools were closed down, teachers were punished for non-performance, increases in teacher salaries by Bloomberg were used to obtain a buy-in to educational programs which were actually performing menticide on the young people subjected to them. Like most things involved here, the origins of this program were in Britain, and Bloomberg actually brought in Prime Minister Tony Blair’s education czar, Sir Michael Barber, as an advisor. Barber advocates changing schools into individual businesses in which principals become the “entrepreneurs,” seeking funding from both public and private sources and testing becomes the stock exchange-like measurement of student “progress.” This model was fully deployed in the New York City school system by Bloomberg.

Right now, there are revolts brewing in the healthcare sector and in the education sector against these policies, and among the parents, teachers, students, doctors, nurses, and patients who have been subjected to these genocidal policies. By inserting LaRouche’s policies for actual economic productivity and sustained growth and science into these revolts, and extending what we have done concerning the national security state, we’re in position to turn the tide in this battle.