This article appears in the March 27, 2020 issue of Executive Intelligence Review.

What Has To Be Built—USA, Worldwide 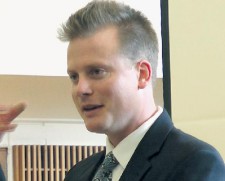 I will give a brief sense of what needs to be done here in Seattle, one of the first North American COVID-19 hot spots, and nationally and internationally. We have to consider this as a global crisis, and the solution from a global standpoint.

As we know, the most effective way to deal with this from the beginning, is the “shelter in place” or quarantine, that we saw was so effective in Wuhan, and now other nations like Italy are being forced to go into. It should be noted that, still here in Washington state, as of this morning at least, there has been no “shelter in place” directive that has been ordered. California, as well as New York, Illinois, Pennsylvania and other states are following suit in imposing that.

But it is odd to me that in the state which has the most deaths—I think we have about 40% of the national deaths, about 83 at last count—there is no such directive; you see the numbers go up by the hour. You have to wonder if this is— [Washington State Governor] Jay Inslee ran on a campaign of climate change and certainly the Green infliction, the Green genocide is alive and well on the West Coast. So, either that, or maybe it’s the marijuana in terms of not being able to get a grip on reality. But whatever it is, this is certainly a problem.

Another key aspect of combatting the virus and its effects, is our medical response, and we see the terrible situation of the woeful destruction of our healthcare delivery system over the decades. The closing down of hospitals. In 1975, the U.S. had about 1.5 million hospital beds available. The number presently is somewhere around 925,000. We have about 575,000 fewer hospital beds than we did in 1975, with a third more people. So, obviously that’s a significant decline.

Look at the declines we saw under Obama—I think there were about 160 hospitals lost under the Obama Administration. And last year—2019, there were 47 hospitals closed in the United States. What this shows is the consequences of accepting the neo-liberal, British imperial economic policy. You get the collapse of your physical economy, and degradation and disregard for human life.

Just to give a sense of what we need to do, let’s just follow through on the question of proper levels of provision of hospital infrastructure, either for emergency or routine medical services. In California, while it does have the needed shelter-in-place policy enacted, Gov. Newsome is calling for the provision of hospital beds, in numbers woefully inadequate for the need. He said, that according to his projections, 22.5 million people could be infected in California: that’s out of a population of about 40 million. That’s if the virus is left unchecked, so maybe those numbers may be off, and hopefully they are. But even just with those numbers, 15-20% of those people are going to require hospitalization. And the levels of California’s hospital beds per capita are as bad as everywhere else around the country; it’s about 2 beds per 1000 people.

Just to give a sense of perspective, before the crisis set in in China, in Wuhan, the per capita hospital beds were about 4.3 beds per 1000 people. So, we’re obviously starting out far behind the curve. In Wuhan alone, they added some 10,000 hospital beds in a relatively short period of time. We saw one hospital was built in six days.

We need an emergency mobilization. I’m going to present just a sense of the long-term arc of what would be required to get to a Hill-Burton standard, just to give a sense of both the way in which we’re going to get hit by this thing in terms of overwhelming the health care delivery system at present, as well as what has to be the long-term perspective.

Hill-Burton refers to the 1946 U.S. Hospital Survey and Construction Act—named for its bi-partisan co-sponsors, Senators Lister Hill (D) and Harold Burton (R)—which mandated all 3,000+ counties to have hospital beds on a ratio in the range of 5 (rural) and 4.5 (urban) per 1000. This is the standard Wuhan had as baseline, when COVID-19 broke out, and they added to the number of beds. But the U.S. nationally is down to an average of about 2.5 beds per 1000, with many counties having no beds at all. Washington and Oregon have 1.5 to 1.9 beds, among the lowest in the nation. Many counties—especially in the Farmbelt, have no hospital beds at all.

Well, we should be building emergency hospital services, and proper hospitals as quickly as possible, and obviously taking all kinds of contingency emergency measures.

We do have the Navy’s two hospital ships that are being deployed. USNS Mercy and USNS Comfort. The Comfort to New York, and the Mercy to Los Angeles. They won’t have infection-isolation capacity, but will help the surge capacity by freeing up scarce on-shore beds for surge. There are obviously emergency needs for things like MASH-style hospitals that can be popped up, and Army-style hospitals that can be popped up in parking lots and so forth. The deployment of the National Guard for these types of missions, plus FEMA medical disaster response, the Army Corps of Engineers, and so on, is now in discussion.

But from the standpoint of understanding where we are in terms of the longer future, or where China was, but also where we need to be going to get to Hill-Burton standards, we would have to add about another 575,000 hospital beds in the nation. This seems to be a daunting task, but it would just be getting us back to the level we were in 1975 of about 1.5 million beds. That would get us more or less near the Hill-Burton standard, which is significant. Those 575,000 hospital beds would mean about 2,000 large hospitals, based on historically lower population figures. Obviously, that’s a lot of work, a lot of bricks, a lot of material that’s going to be required to do that.

The other side of this task, is to meet the demand for the infrastructure it takes to support this scale of hospital-centered health care delivery, meaning, at baseline, the energy and water requirements. Hospitals are intensive in terms of energy requirements. It is estimated that at present levels of the 925,000 hospital beds, just to operate them requires 458 trillion BTUs. We would actually have to add to the grid. We have to add about 9600 MW to our electricity grid. That’s about 1.5 times the output of the Grand Coulee Dam; that’s about 10 of the Westinghouse pressure water nuclear reactors. That’s obviously a huge task in its own right, apart from the simple construction job of building the hospital structures.

We would also have to add about 85 billion gallons of water a year for the water requirements for these added hospitals. That’s a lot of water.

From a long-term perspective, we should take this crisis as an opportunity to go back to the approach of Franklin D. Roosevelt’s Public Works Administration, Civilian Conservation Corps and such programs. Get the young people deployed, who have been working until now in mostly worthless things.

Mr. LaRouche had been very vocal about this: an FDR-style mobilization is certainly at the core of his Four Laws. Younger people should be employed for the longer-term perspective of building what we need in this nation. They can be deployed internationally to help in Africa, to help in South America, to help in these places that are going to get overwhelmed; and to give them a much larger sense of mission.

To get to Hill-Burton standards internationally, would require perhaps 35 million hospital beds! That’s total; that’s not adding an additional 35 million, but I don’t know what the existing totals are. From place to place, there is great variation, and too often, complete absence of facilities. This is woefully the case in Africa, large parts of South and Central America, and some other locations. For these 35 million beds, it means about 116,000 total hospitals.

Again, understanding that there’s obviously tens of thousands of beds in existence already, but for rough appreciation of the gear-up necessary to support 35 million beds, let us consider that they might require on the order of 358 more gigawatts: that’s more than 50 Grand Coulee Dams, or 360 Westinghouse reactors.

This is an amazing amount of energy to be added to the system. I think we should deploy these small modular reactors, now in the works. I think we should go the frontiers of what our grid should be, and certainly the question of nuclear power, as we move towards fusion, is obviously going to give the highest skill level to the economy overall.

NuScale Power and some other companies have new 60 MW reactors that can literally be put on the back of semi-trailer trucks and shipped where they need to be sent. Also, they can be rolled out in a factory-style manufacturing process.

The water requirement for this modern scale of hospital services worldwide is 5 trillion gallons of water a year for its operation. You’re looking at about half of the full capacity of Lake Meade; that’s a lot of water. It should be an international mobilization to build these hospitals, so through collaboration we become capable of dealing with something huge like this.

Improving the physical economy and engaging in this physical economic mobilization, require all these—medical facilities, energy, water—and other aspects of infrastructure which uplift the potential relative population density. This puts mankind and the biosphere in a position such that lower life forms that are now plaguing us, are not going to have the ability to thrive at the expense of our species. We are taking dominion over nature. LaRouche has certainly always had that perspective; that’s why he highlighted Vernadsky in his Four Laws.

This gives the larger perspective. We have to think about this as an international mission; this is for humanity as a whole. I think that will give us, as Helga said, the understanding of the importance of this agapic mission. We will have the proper passion that will be required to deal with this mobilization.