by Jacques CheminadePresident of the French political party, Solidarité & Progrès 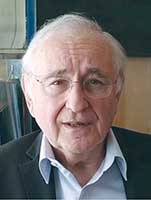 I’m very happy to be with you in this moment that challenges our humanity. It is an unprecedented moment, an historically unprecedented moment, but not unpredictable, because Lyndon LaRouche had warned against it since August 15, 1971. Unprecedented, because half of humanity is confined at this point. We have been confined in France for three weeks, and we are going to be confined probably until the end of April, maybe later. So, it’s many weeks. Also, most of the world economy is shut down. You have a terrible crisis coming in the auto industry, oil industry, agriculture—the whole foodstuffs question—and the service sector, obviously. In this condition, the world that comes after is not going to be back to normal. It is this normal world of the last 50 years, mainly since August 15, 1971, that has generated the present situation. It was normally destructive.

At this point, either we are thrown into chaos, destruction, and a murderous Malthusian universe, or we change it. And that is what we are doing with the upcoming April 25-26 international Schiller Institute conference. It is time to throw away the axioms and habits of the past world and build a new one; a world dedicated to the generations to come, and to the common good of us all. In that sense, as was said before, the coronavirus pandemic is the opportunity of our lives—the moment for which Lyndon LaRouche has prepared us since 1971 to 1974.

It was 1971 when he said that the financial deregulation and cultural degeneration were going to create the conditions for an economic and cultural collapse, which would generate world pandemics. Then, in 1974, when he created the Biological Holocaust Taskforce. Now the whole world is in the state that LaRouche forecast, and it is our moment to grasp, as Beethoven once said, it is moment to grasp fate with our teeth; to grasp destiny with our teeth.

We Have to Change Society

For that, we have to change our society, and the individuals that are part of this society, to re-establish the immune systems of both the society and the individual. The human immune system is connected with both the emotion of life and the emotion of the mind—the mind of nations as well as the minds of each of us individuals composing those nations. This means to prevail over three interconnected enemies—the financial dictatorship of the British Empire and its allies in the world, all bureaucracies organized to serve the Empire, and our self-destructive inactions generated by the social cultural system of the Empire, generating within ourselves, which has generated what I would call a voluntary bondage. Our complicity from inside, from a fear of being exposed, or a hunger for rewards.

Lyndon LaRouche has polemicized against the many different ideologies that generate individual impotence, so as help us free ourselves from our shackles, and create a universal living chorus. Here again, the pandemic is an opportunity to deal with it. We are at home; we have time to listen to the best of Classical music, to read the best philosophers, and read and reread the wise writings of Lyndon LaRouche in order to proceed to what the first Christians called an examination of conscience. To communicate through the internet, as Schiller Institute NYC Chorus Director Diane Sare is organizing in the United States and beyond, to sing together the tribute for our human future.

We have to spread within ourselves the germs and challenges of creativity, not for creativity to please ourselves, but rather to be ready to organize during the pandemic, and above all, to fight for a better world; to seize this opportunity to change the world. For that, we need to act as a unified whole, as a symphony of civilization. Or better said, a symphonic civilization. In that sense, each of our sovereign nations is not a population, but it is an inner creative force in action.

What have our governments done until now? Some have been criminal by action—generally the British government; others by omission—a benign criminal neglect. Within each nation, we have to act as one unity universally, and all the world nations should also act as one.

Let me remind you of something. During the Spanish flu, from 1917 to 1919, tens of millions of people died in the whole world. Why? Because there was no internationally organized mobilization to fight the flu. Inside every country, the state left the responsibility of a fight to the decentralized agencies, the Aristotelian approach that the sum of initiatives would lead to a good result. There was no conductor for that orchestra. It brought disaster. In France, it was the prefects, the leaders of the regions, who had to take over. In Germany, it was the municipalities. So, it was a disaster. Millions of dead, including a very brilliant physicist and mathematician, who died because she took care of the wounded soldiers. What we need now, as LaRouche said, is a top-down approach, an anti-parochial approach, even if requires confronting certain people; I have some training on that here.

The Situation in France

In France, we have a very good example of a well-organized, empathetic social unit: It is the public hospital. We had that. It has been dismantled, deconstructed piece by piece, less financing, fewer beds, and above all, the imposition of a just-in-time management, instead of a wise inventory management. The result is that we had a very large supply of surgical and care-giver masks in 2013. But, decisions were taken in 2014 and then again in 2016, which liquidated most of the stock in reserve for financial reasons. That created the conditions in which we are now living, and many people have died as a consequence.

At the beginning of this year, in March, we did not have enough surgical masks or the other types of protective masks, an absolute disaster. We had the same type of deficit of ventilators, and screening tests. Was it unknown to our authorities? In September 2019, a panel of experts issued a report calling for emergency anti-pandemic policy, stocking materials to fight against epidemics. It was not done. Nothing was done!

Today, the government parades as a war-government, and does a few useful things, like an industrial mobilization to produce ventilators, and the Airbridge with China. But it’s too little and it’s too late. They have lost all credibility: The prevailing institutions have lost all credibility; the government has lost all credibility. The hospital staffs are furious, from the caregivers to the top professors, because they don’t have the means to take care of infected people. Worse, in our French senior living facilities, and for elderly who have to stay home, either in these senior homes, or in their own homes, they only have limited medications available, and no cures, but only a lady-do-rightly distribution of palliative care medicines.

They don’t kill people, but they are letting them die benevolently for lack of means provided by the state institutions and the administration. The responsibility is put on the back of the doctors serving in our senior facilities and the private practice physicians, who are desperate and furious. It is triage, to say it bluntly, against old people over 70-75 and people with chronic diseases, but it’s triage because they don’t have the means to treat everybody. And the fault is with these institutions that did nothing to prepare for what was going to happen, and what was, again, predictable, as LaRouche warned.

Paris is an absolutely dead city. All France is semi-dead, like Italy and Spain.

The Role of the Schiller Institute

We are doing three things here: The first thing, of course, is the invitation for the international Schiller Institute conference, to establish an international platform for the world to come. People sometimes have problems in understanding that it’s not a conference like other conferences, but that it’s an emergency conference, that will have to insist and fight for people to understand, because some of them are like deer caught in the headlights of an oncoming car.

Also we are answering the questions people have with a roadmap of mobilization for public health, from total confinement, which is necessary here, as in all other countries—the Chinese model—to a mandatory international cooperation which leads us into our Schiller conference. We are communicating everything we can that Lyn has written, translated into French, and also my warnings during my Presidential campaign. We have a permanent flow of programs addressed through the networks, internet, YouTube, Facebook, on what’s happening. We have a team of about 50 people intervening in the social networks and sending our message to elected officials, but more than that, and much better than that, to firefighters, police, to doctors and all the medical caregivers in public and private hospitals.

I want to say one last thing: First, we are very close with people in French-speaking Africa, and every time I tweet something, it’s picked up in French Africa, in a rather unprecedented way. We have people in France that want to use Africans as guinea pigs for tests, which I protested against, and this created a wave of response, with people asking us, “What should we do?” instead of that. So, we are responding to that, and we are leading them towards our conference.

And in this situation, whenever people from the West and the East should meet, with their different cultures, they are not the same people, but they have the same commitment to the future of humanity. And in this political moment, I want to convey this message: We want all here, for the sake of this world future, that the United States re-emerge as something I like to call a “dynamocracy” which means a dynamic democracy, in this sense: dynamic because it has a center, and it’s not going into all kinds of directions. We need to have unity in diversity and a dynamic nation, which becomes a beacon of hope for the whole world, with a real, strong Presidency, to serve the future.

And I must say, we don’t want a penalty setting system spreading sanctions around the world. There should be a ceasefire, there should be a dropping of all sanctions, for the future of humanity, and to organize this international cooperation that Helga is going to organize in this conference. And I think that’s the key to our future. And in the United States, if people go back to thinking about their destiny and for what they have been fighting, what their ancestors have been for, they should understand that this inspiration should be part of the future, and people should understand that into the future, they should have the same thrust that their ancestors had, in a much better way, because the United States should be doing that with other countries around the world. And in particular, the four main countries: India, United States, Russia, and China, but also with other countries, creating cooperation of people caring about the advantage of the other. And I stress, again, Africa should be an example of that.