We Are All One Human Race

by Hussein AskarySouthwest Asia Coordinator for the Schiller Institute 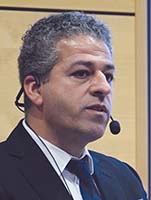 I’m really honored to be at this conference with all these distinguished speakers. I’m going to be a bit more optimistic, because there are certain things I’m going to say which you will realize. But without being complacent, and while we fight this pandemic together with full force, we need to take a step back sometimes and think about the positive aspects of the coronavirus pandemic. People might be surprised that there are some. There are important aspects.

Number one, people are gradually realizing that we are all one human race. This was not really self-evident before. The coronavirus is treating us all as equal people. We are now, in the words of President Xi Jinping, a true community of a shared destiny. We share today the same destiny. The other thing the coronavirus has done is to expose the fateful shortcomings of the current system, which is dominated by the trans-Atlantic powers. It has also shown people what is truly valuable in terms of what LaRouche calls physical economy, which means that if you need an intensive care bed, you get it. If you need a specific medicine, you get it. If you need to be transported somewhere, you can have that possibility. This is something which is now taking place all over the world. People feel they are getting closer to other humans, although they are on a different continent, because we are all facing the same problem.

The situation in West Asia, or Southwest Asia generally, and in Africa, has many ironies. It’s a terrible situation, but the fear that there is no real health care system is forcing people to stay at home. They know—I saw a video of a person going around with a loudspeaker in Morocco, although Morocco is more advanced than many other countries, he says on the loudspeaker, “Stay at home! If you get sick, we only have aspirin in the hospital. If you get any problem, we will not be able to treat you, so you better stay at home.” That’s, in a certain sense, a disastrous situation, but at the same time, it’s forcing people to be careful. We have the Prime Minister of Ethiopia, he wrote a fantastic opinion piece in the Financial Times last week, where he said, “In my country, and in many countries in Africa, drinking clean water is a luxury. So, to tell people to comply with the recommendation to wash your hands, is completely absurd.” This is the situation we have.

We have to think about why did that happen? Helga explained very clearly the criminal policy which has led to this situation, that countries were not allowed to develop. But the thing is that what we have to do now, as Helga said, is to look forward, work actively now to implement the things we need to implement. The good news in a certain sense is that humankind shall overcome this crisis. We know that we as a human race have gone through many such catastrophic events before. Now the viruses like the coronavirus are very smart, but they are not intelligent. They take advantage of us when we have our guard down, when we are vulnerable. We made ourselves vulnerable. But we are the species which is intelligent. We have 1,010 ways to get these viruses if we use our intelligence, if we use our activity. But the issue is, what we will learn from this; how we act now, and what kind of world we need to build after this crisis is overcome.

Look Back to the 14th Century

In this respect, I would like to invite two gentlemen from the 14th century, whose works I am now revisiting because of a lot of downtime. The first one is Ibn Battuta. He was born in Tangier, Morocco in 1304 in the 14th century. He was educated in theology, but at the age of 20, he decided to go make a pilgrimage to Mecca in what is today Saudi Arabia, to fulfill his duty as a Muslim. However, he was fascinated by the opportunity to meet other theologians and philosophical thinkers in the different cities. He was visiting in North Africa, Tunisia, and Egypt; then Palestine, Syria, Iraq, Yemen, and so on and so forth. He spent 27 years travelling around what was his known world then. So, instead of going home after the pilgrimage, he travelled for 27 years. He visited most parts of the world, the Caucasus, Central Asia, and India. He worked in India for three years as a judge in Delhi. Then, he went to East Asia and China.

On his way back home to North Africa after these 27 years, he witnessed the Great Plague in 1347 and 1348. What he witnessed in Damascus and Jerusalem and Cairo and other big cities of the time, his description is almost identical to what we see for example in northern Italy, what we saw in Wuhan in the first days and weeks of the outbreak. So, there is very little difference between what people went through then and what we see today. But he survived the plague, and now we can read his fascinating account.

The other gentleman is Ibn Khaldun. He was born in 1332, a couple of decades after Ibn Battuta. He is described as the first true historiographer, a real history scientist. He lost both his parents in the plague; they died when he was 16 years old. This affected his life a lot. He was very well educated, and he wrote many volumes about the history of the world. But his most important work is called The Introduction; this introduction to his work is in two volumes. So, this is a very fascinating character.

End the Cycles of Oligarchical Failures

I have certain criticisms of his method sometimes; it is somewhat Aristotelian. For example, in his criticism of historians before him, he says they are just reporting events as they happened. But, he says, there is no causality: they don’t mention the level of ideas and culture, the level of scientific, artistic, and economic productivity at the time. He says these are the things we have to study in history—what are the ideas and the behavior and habits that control a society? He is also known as the person who came up with the idea of a cyclical development of civilization; that civilizations rise and fall. [audio garbling] and you are mission-oriented.

Then you get to the age of 40, people are prosperous, but then they become complacent. They forget the importance of culture, science, art, and so on. They turn, like we have had in the past two or three decades, into a consumer society which is focussed on pleasure-seeking. Acquiring money and profit and never paying attention to the development of the mind. He said in that sense, these societies become senile, because they forget how they started; they forget the reasons why they became great. So, in that sense, Ibn Khaldun is thinking like LaRouche does in a sense that history is not the history of events, it is the history of ideas. That’s the thing we learn from understanding history.

He said these societies become senile and finally collapse, either by natural disaster, epidemics, or invasion by foreign powers. He sums up the situation during the plague and the aftermath in a very chilling way. He writes:

Civilization in both the East and the West was visited by a destructive plague which devastated nations and caused populations to vanish. It swallowed up many of the good things of civilization and wiped them out. It overtook the dynasties at the time of their senility, when they had reached the limit of their duration. It lessened their power and curtailed their influence. It weakened their authority. Their situation approached the point of annihilation and dissolution. Civilization decreased with the decrease of mankind [of population]. Cities and buildings were laid waste. Roads and way signs were obliterated. Settlements and mansions became empty, and dynasties and tribes grew weak; the entire inhabited world changed.

These are the words of a person who actually survived the plague. But what he is discussing is what preceded the great plague—it was the decline of civilization. We had 200 years of the Crusades; we had the Mongol hordes invading from the East into the Islamic world. Then the Venetian banking practices, they were both running the Crusades as well as attempting [to control] all financial matters in the Mediterranean and the trade. Then, as some of my colleagues have described it in EIR, we had the financial and banking collapse. But the infrastructure of the nations was already destroyed, and that’s why the plague could take such a toll on the populations in Asia, Africa, and Europe.

So, what we have to do now, as Helga is saying, is, we have to relaunch civilization, basically. We have to go back to the best of our civilization in every country; what were the best times we have had? Energetic, creative, and mission-oriented; that’s what we need. This is the way we need to think. I will end with a Chinese saying, which President Xi Jinping repeated in a conference: “Never forget how you started, and you will succeed.”

Therefore, I am speaking in a tone of optimism, but also with the understanding of what the reality is. That’s why we have to act accordingly. Thank you.