This article appears in the April 24, 2020 issue of Executive Intelligence Review.

Our Humanity Will Be Our Cure

We’re asking that all of you help us make the upcoming April 25-26 conference, a very, very successful international dialogue. We’ll have participants from countries all over the world with simultaneous translation into several languages, and we believe this is the basis to create something completely new and something that’s in the image of the foreign policy that Lyndon LaRouche represented—Lyndon LaRouche as a veteran of the Second World War.

I think it’s important to think back, for a moment, and recognize a few things about this time: It helps us to think back to an earlier future. Just this: April 12 was the 75th anniversary of the death of President Franklin Roosevelt. Much of what we’re talking about today involves Roosevelt’s view and vision of what the world could have been, at that time. The intent of our conference,— and we had hoped that there would be a simultaneous conference involving the leadership of Russia, China, India, and the United States, occurring to commemorate the end of the Second World War.

Well, that is what our conference will be. Our conference will, however, initiate the concept of Earth’s next fifty years, how it is going to be shaped. But there’s a useful way for Americans to avoid getting bamboozled into thermonuclear war, which is the sort of thing that we’ve been on the verge of, on the cusp of twice: First we had the Russia! Russia! Russia! Operation Russiagate, and now, we’ve got China! China! China! You’d think that people would get tired of being played in the same way that Lucy used to play Charlie Brown with the football, but we’ve had a little bit of that happen in the last weeks.

It’s important to try to think about the actual tradition of the United States, and so we’ve prepared a little postlude for you, today. And it’s a way of thinking about our own history. LaRouche gave a speech in the year 2000, titled “The Issue of America’s Manifest Destiny for Today,” and he said this:

But with the birth of Christ and the leadership role of his Apostles, there was a new conception of man and society, which was based largely upon the foundations of the Classical Greek tradition, especially the ideas associated with the work of Plato. And in the Apostles, especially in the Gospel of St. John, or the Epistles of Paul, you’ll find this conception of man on which our later foreign policy here was founded. You’ll find it established there; especially, for example, in Paul’s Epistle in I Corinthians, Chapter 13, where this concept of man was set forward.

And just to remind people, that is, “Though I speak with the tongues of men and of angels, and have not charity, I am become as sounding brass or a tinkling cymbal.”

Franklin Roosevelt used his family Bible on March 4, 1933 for his first Inauguration, for his swearing in. And he had the Bible open to that passage, I Corinthians 13. That was the same day that he famously said, “The only thing we have to fear is fear itself. Nameless, unreasoning, unjustified terror, which paralyzes needed efforts to convert retreat into advance.” And that, of course, is our present circumstance in our country, today.

In 1861 to 1876, under Lincoln’s leadership, and his followers, immediate followers, the United States emerged as the most powerful single economy in the world....

Our level of technology was a model, so that by about 1876-1877, the entire world was looking to the United States as the model to be emulated. Russia adopted the model of the Americas. We had Mendeleyev, who was at the 1876 Philadelphia celebration of the Centennial of the founding of the United States. He went back to Russia, and he built the Trans-Siberian Railroad.

Japan in the 1870s, adopted the American model of Henry Carey. And Henry Carey directly had a hand in directing Japan in doing that, to lay the foundations of what became the economic successes in Japan. And the same thing happened with Sun Yat-sen at a later point.

That’s what Lyndon LaRouche had to say about China. And that’s what you’re seeing, that’s been realized recently in China. The elevation of 700-800 million people out of poverty put the nation of China on a trajectory different than that of the United States, which has been plunging—for reasons that have very little to do with Donald Trump—its citizens into poverty since approximately August 15, 1971.

It’s that fear that we intend to uproot in the United States, now, and the policy that we’re calling for, the foreign policy of the United States, as Roosevelt practiced it, and Lyndon LaRouche stated, is I Corinthians 13. We can speak with the tongues of men and angels about democracy, or about the greatness of America all we want, but if we do not mobilize the world, and ourselves, now, we are “as sounding brass, tinkling cymbal,” and we will wind up disappearing from history. We have that choice, or we have the choice that our humanity will be our cure—not a vaccine, but our humanity will be our cure. That is the only means for durable survival.

And that is the subject we will be discussing at our April 25-26 conference. So, on behalf of the LaRouche Political Action Committee, we hope to see you there, next week, with us. 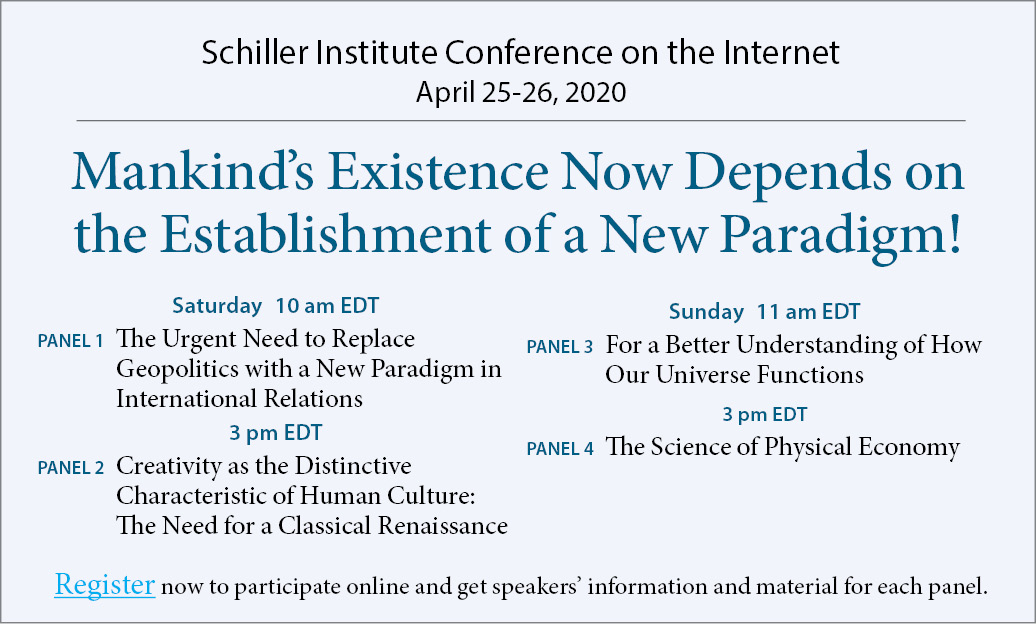 Click to register for the Schiller Institute Conference on the Internet, April 25-26, 2020