This transcript appears in the May 1, 2020 issue of Executive Intelligence Review.

Schiller Institute Conference on the InternetApril 25-26, 2020

We present here the edited transcripts of the first of four panels of the two-day Schiller Institute conference. Reports on the remainder of the conference will be published in future issues. 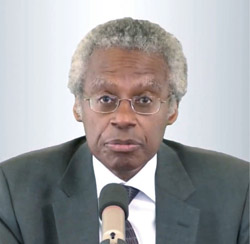 Dennis Speed: On behalf of the Schiller Institute, I want to welcome everyone to today’s conference, which is being broadcast all over the world. The conference is being translated into many languages—Spanish, Chinese, German, French, and Italian. We welcome our international audience and thank the translators very much. Today’s conference is called “Mankind’s Existence Now Depends Upon the Establishment of a New Paradigm.”

I’d like to welcome and announce our speakers for this morning’s panel, which is called “The Urgent Need to Replace Geopolitics with a New Paradigm in International Relations.” Our keynote speaker will be Helga Zepp-LaRouche, the founder and chairman of the Schiller Institute. Following Mrs. Zepp-LaRouche will be His Excellency Mr. Dmitry Polyanskiy, First Deputy Permanent Representative of the Permanent Mission of the Russian Federation to the United Nations; Ambassador Huang Ping, Consul General of the People’s Republic of China in New York; as well, Counsellor Zhou Guolin, head of the Science and Technology section of the Consulate General of the People’s Republic of China in New York; Jacques Cheminade, chairman of Solidarité et Progrès, and former French Presidential candidate; and Professor Michele Geraci, an economist from Italy.

Seventy-five years ago today, April 25, 1945, Russian and American troops met at the Elbe River in Germany. This signalled the end of the Second World War in Europe. The postwar world, as envisioned by Franklin Delano Roosevelt, was a world that would be free of British and other colonial rule; but that was not to be. Roosevelt’s death on April 12, 1945, allowed the British and other political powers to downshift history. From 1945, Lyndon LaRouche, a veteran of the Second World War, vowed that—in the words of the poet Friedrich Schiller—“a purpose which higher reason hath conceived, which men’s afflictions urge, ten thousand times defeated, may never be abandoned.” Lyndon LaRouche’s postwar experience in witnessing the Indian independence movement gripped him. He decided to commit his life to achieving that FDR dream of a world free of colonialism.

But Lyndon LaRouche also realized that to end imperial rule, what Winston Churchill had once called “the empire of the mind” must be defeated. LaRouche regarded Lord Bertrand Russell’s idea of scientific method to be as evil as were his ideas about society and humanity. Russell espoused ideas like this: “If a Black Death could be spread throughout the world once in every generation, survivors could procreate freely without making the world too full.”

The Insidious Evil of Malthusianism

LaRouche, opposing such a Malthusian view, wrote hundreds of documents over five decades that proved that there were no limits to growth; limits were only in the human mind. Alexander Hamilton’s design of the United States Treasury’s power to issue public credit for investment in the nation’s physical improvement expressed the same outlook. In 1985, Lyndon LaRouche produced a Special Report published by Executive Intelligence Review, titled Economic Breakdown and the Threat of Global Pandemics. This report forecast that the Malthusian financial policies of the World Bank and the International Monetary Fund would lower the resistance of populations worldwide, leading to pandemics and the deaths of millions. 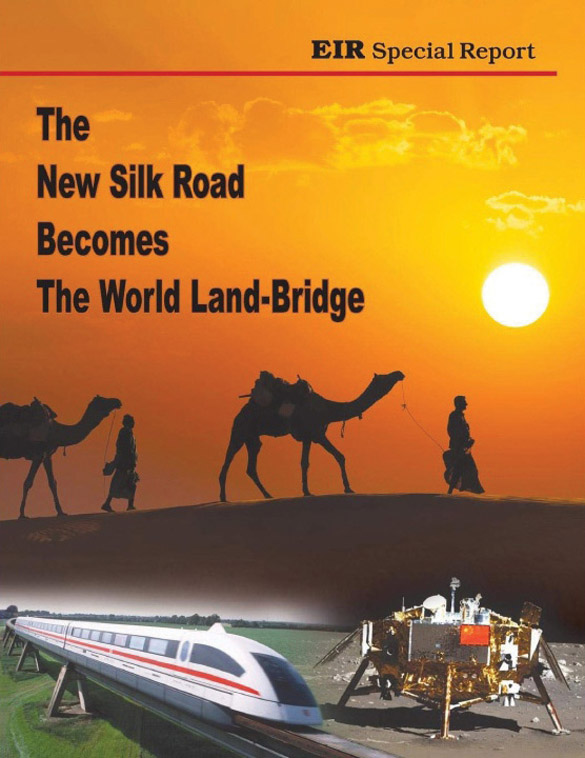 Throughout the 1980s and 1990s, a LaRouche dialogue with many nations to avoid and avert that disaster, most notably with China, resulted in the issuance of The Eurasian Land-Bridge: The New Silk Road, in January 1997. Helga Zepp-LaRouche visited several nations on behalf of this proposal, and it was a diplomacy of development, not geopolitics. In a public talk in 1997, LaRouche made these remarks regarding why China and the United States are natural allies in the pursuit of world economic development.

Now, there’s only one other power on this planet, which can be so insolent as that, toward other powers, and that’s the [People’s] Republic of China. China is engaged, presently, in a great infrastructure-building project, in which my wife and others have had an ongoing engagement over some years. There’s a great reform in China, which is a troubled reform. They’re trying to solve a problem; that doesn’t mean there is no problem. But they’re trying to solve it.

So that, what we have here, is a set of projects, which are not just transportation projects, like the transcontinental railroad in the United States, which was the precedent for this idea, back in the late 1860s and 1870s. But you have development corridors, where you develop an area, of 50 to 70 kilometers, on either side of your rail link, your pipeline, so forth—you develop this area with industry, with mining, with all these kinds of things, which is the way you pay for a transportation link. Because of all the rich economic activity: every few kilometers of distance along this link, there’s something going on, some economic activity. People working; people building things; people doing things, to transform this planet, in great projects of infrastructure-building, which will give you the great industries, the new industries, the new agriculture, and other things we desperately need.

There is no need for anybody on this planet, who is able to work, to be out of work! It’s that simple. And that project is the means.

If the nations, which agree with China—which now include Russia, Iran, India, other nations—if they engage in a commitment to that project, which they’re building every day; if the United States, that is, the President of the United States, Bill Clinton, continues to support that effort, as he’s been doing, at least politically, then what do you have? You have the United States and China, and a bunch of other countries, ganged up together, against the greatest power on the planet, which is the British Empire, called the British Commonwealth. That’s the enemy.

We have determined this weekend, based on our advisers and the facts, that the international financial and monetary system is hopelessly bankrupt. And we, in our responsibility as heads of state, must put these bankrupt institutions into bankruptcy reorganization, in the public interest. And it is in our interest, to cooperate as nations in doing this, to avoid creating chaos on this planet.

The result then, is that such an announcement, on a bright Sunday morning, will certainly spin the talking heads on Washington TV. [end video]

Speed: LaRouche’s view of China from 23 years ago has much to teach us today. Here is another excerpt from a speech ten years after what you’ve just seen, which was done in 2007, describing the LaRouche proposal for a new international monetary system: 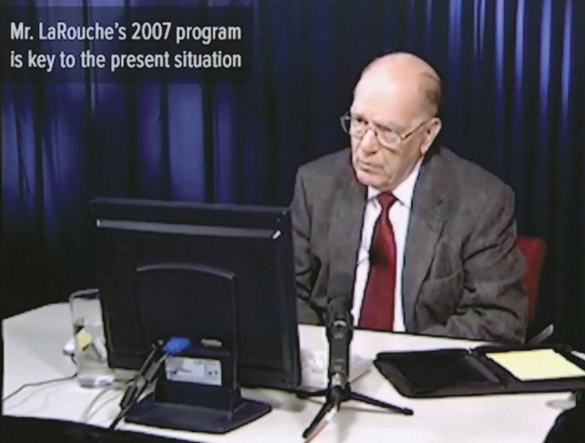 LaRouche: [video]: We have to create a new monetary system. And what I’ve proposed is this: If the United States, and this is not impossible, if the United States should extend a proposal to Russia, to China, and to India to co-sponsor the formation of a new international monetary financial order, that could be done. The problem is that most nations, such as those of Western and Central Europe and other parts of the world, are not able to independently act in this way to initiate. However, if you get the United States and Russia, which are two of the largest nations of the developed world, formerly developed world, and you combine that with China and India, which are the two Asian nations which represent the largest ration of population of the world’s population. Then you have a combination which can provide a protective cover for joint action together with the nations of South America, for example, and Europe and elsewhere.

We have now an incalculable crisis worldwide in progress. This is not a financial crisis; this is not a financial scandal as such. This is not a scandal in any ordinary sense. This is a crisis to see who is going to run the world. Is it going to be a group of nations, or is it going to be the emerging new British Empire—or the re-emergent British Empire, which never really went away—which takes over from the United States, and establishes its world rule through globalization?

Therefore, what we have to do is this: The present world international monetary financial system is bankrupt. There is no way in which it can be reformed on its own terms and survive. Any attempt to maintain this system would mean a complete disintegration into a New Dark Age comparable to what Europe experienced during the 14th century, with the collapse of some of the Lombard banks in Italy at that time. That would happen. Therefore, the solution is to establish a new international monetary financial system. That could be done on the basis of the U.S. Constitution’s special provisions. Remember, the U.S. system is not a monetarist system. The U.S. system constitutionally is based on a credit system based on the Constitutional authority of the United States government over the utterance and control of its own money. In other parts of the world, countries’ financial systems have been controlled largely under the Anglo-Dutch liberal system in which this system, through its network of private banks—so-called central banks—actually dictates and controls governments. So, we’ve had an imperial world monetary financial system which has been traditionally centered on the British Empire essentially ever since February 1763.

The Anti-Imperial System of Sovereign States

Against that, the only surviving system, of any great significance today, is the alternative. That is the Constitutional provisions of the U.S. Constitution, which establish the U.S. dollar as a credit mechanism of the U.S. government. That is, under our system, when it’s operating—and it has not always operated that way, obviously—under our system, we generate credit through a vote in the Congress; essentially House of Representatives. The President of the United States then acts upon that authority of this Federal law, to utter currency as credit against the United States itself.

Now the chief function of this credit is not just to print money. The function of this credit is to supply capital funds for long-term capital investments; especially in the public sector, but spilling over into the private sector. In the public sector, largely large-scale infrastructure projects for the states as well as the Federal government. This credit generally extends for a life period of 25-50 years in terms of modern economy. Therefore, we have a present world monetary financial system which does not function. However, if the United States affirms its Constitution, and enters into agreement with three other sponsoring countries, and other countries, then we can create a new international monetary financial system immediately; putting the entire existing system into bankruptcy reorganization to maintain the continuity of essential functions, and to start a program of actual net economic growth and development.

The hard core of this over the long term would be long-term investment in basic economic infrastructure and development of the economies of various parts of the world. A cooperative set of treaty agreements of 25-50 years’ duration to create capital formation to bring the world up in the way that Roosevelt had intended, had he lived at the end of the war. Therefore, the United States must be reformed in the way consistent with its own Constitution, by offering cooperation with other countries—especially leading countries—to establish a new world system; a new version of the old Bretton Woods system which would provide for recovery programs of over 25-50 years of long-term investment throughout the world as a whole. [end video]