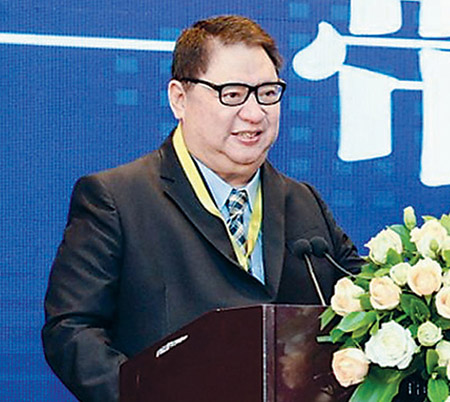 Greetings from the Philippine LaRouche Society!

Thank you for allowing us to share our insights, as to how we find ourselves playing a significant role in the global peace effort. For most of us observant of both international and local affairs, the past decade has been most foreboding, causing heightened apprehension due to increased tensions among the superpowers.

The overthrow of the 2014 Ukraine leadership by, admittedly, the CIA, and the subsequent encirclement of Russia and China by Obama’s Asian pivot were major steps being taken by the Western allies, asserting military dominance over those who dared to defy them.

At about the same period, the destruction of Syria, support for the manufactured ISIS and mercenary terrorists used in the overthrow of Libya’s Qaddafi was in full operation, intending to take out President Assad, to replace him with a puppet government. But they did not expect President Putin of Russia, and President Xi Jinping of China to collaborate in deterring effectively the British and Obama move to fast-track the world into a war.

And just to move quickly forward, neither did they expect a leader of a client state—or, a better description, a “compliant state”—to be thrust into the Presidency of our Republic, by an overwhelming majority. President Duterte made no promises, except to fight terrorism and do battle with the drug syndicates. Even if his vocabulary needed some refining, he said, “My admirers readily tolerated the expletives.” Because he epitomized the anger long suppressed by the alliance of falsely elected government officials and the oligarchic corporations causing desperate conditions of life.

Yet nothing has so unified the country more than the incident where shortly after his election, even before his inauguration, Obama gave him a call, to remind him of the obligations that the previous corrupt government had made with him, regarding the Visiting Forces Agreement and the Enhanced Defense Cooperation Act, virtually establishing the Philippines as the most proximate U.S. military base facing China, and consequently its nearest target in case of a nuclear confrontation between the two powers.

What seemed to get Duterte more incensed, aside from the condescending tone of Obama, was the threat that unless our President were to submit to these dictates, he would withdraw a $700 million assistance earmarked by the U.S.A. for the Philippines. Duterte retorted by saying “He can keep his money and go to hell! We are no longer your colony.”

I believe many Filipinos got enamored to the newly elected leader, after this. Until this day, four years into a six-year term, he still enjoys an 87% popularity and approval rating. For once, over so many decades, including the administration of Marcos, and those before him, the Filipino people felt like a truly sovereign nation.

Inevitably, this strained relationship brought us closer to Russia and China. Yet, subsequent improved relations with the U.S., upon the election of another phenomenal leader, President Donald Trump. It’s worth noting that whether President Duterte knew the implications of what he did, when he asserted our independence, we in the Philippine LaRouche Society could not resist with the voice out to constituents and friends in government our approval of these events. Immediately, we knew that the Philippines was going to play a key role in establishing peace in the Southeast Asian region.

But so, too, did the soldiers of the CIA, George Soros, and the “deep state,” or whatever the names they are called. They went into a relentless campaign to disparage the President, using the mercenary opposition and mainstream media in accusing Duterte as a China puppet, who had placed the country into a “debt trap,” conveniently ignoring that we have been in one for the past four decades, courtesy of the IMF and world’s money-lenders.

The demonization of China has been well-orchestrated, ironically including the so-called “leftist” elements, whose former battle cry was to put down American imperialism, but who are now massively demonstrating against the supposedly expansionist plans of China and her intentions to attack and occupy the Philippines—now calling on their American imperialists to protect poor Filipino fishermen.

Despite all these geopolitics being played by characters associated with the financial oligarchy, manipulators of Wall Street, politicians and a host of other British agents, we observe that Trump is standing his ground, not to be lured into intrigues concocted by people in his cabinet, or mainstream media on China’s and Russia’s intentions toward the United States. It is obvious by his confident demeanor that his relationship with Putin and Xi Jinping is far from being antagonistic—which bodes well for the whole world.

But we all know, that matters have taken a very sharp turn, for the worse, recently. The pandemic will not spare the Philippines, and many third world countries similarly situated. The resulting economic conditions will turn from bad to worse, for all countries. It is not good for the world’s population, but definitely a boost for the intentions of those who want it destroyed.

If not for China’s Belt and Road Initiative, started in 2013, the global infrastructure program, historically the greatest project ever conceived by man for mankind, linking all seven continents by land, by high-tech transport systems, now with more than 150 nations having joined, there will be no alternative project of this magnitude that can counter the staggering effort being undertaken by those, who, like the mythical god Zeus, will destroy the mortals.

These mortals, who in a short 30 years, have risen from decrepit conditions to becoming the second largest economy in the world; a people with the most extensive railway system doubling that of the world’s combined; a country, which has started to help develop the African continent, the most exploited people in the planet, constructing a railway from South Africa to Egypt, covering 9,000 miles, roughly three times the distance from New York to California; a country which has brought its whole population of 1.4 billion above the poverty level: They did not do it by occupying other countries, nor did they intimidate others to buy their goods, or control their currencies, and establish 600 military bases all over the world to enforce their will over others.

They did it the way other great thinkers and leaders would have: Alexander Hamilton, Benjamin Franklin, Abraham Lincoln, Franklin Roosevelt, John F. Kennedy, and Lyndon LaRouche. There is a saying, that the tree that bears much fruit will attract those who will throw stones at it. The U.S. and other countries have two options:

One is to join those whose vision of the world is based on geopolitics, in which they stupidly take sides and ally themselves with whomever they consider to possess greater military might, in anticipation of a world nuclear conflict.

Or, collaborate with China, Russia, India, and over 100 other countries, the Philippines included, in a global collective effort to stem the devastating effects of an ongoing collapse of the world financial system, in confluence with a pandemic which threatens humanity with millions of deaths. In a real sense, the world’s faith and 8 billion lives lies in the hands of one Donald Trump: His decision-time is running short, because the enemies of mankind are on a massive effort to stop him from doing what is right.

We in the Philippines will do what we can to influence our decision-makers not to fall into the China demonization trap. We are confident that the local opposition and the leftist elements have not been able to convince our people that China has taken control of the Philippines. On the contrary, it’s the U.S. naval assets which are sailing and docking in our ports, needing no permission to do so.

Just as Trump is the principal obstacle to World War III, Duterte’s presence is a deterrent to the deep state’s wish to use us as a launching pad for a preemptive strike against China. It is certain that both these leaders are among the top in their list of the demonic.

We join Helga Zepp-LaRouche, the whole LaRouche movement, friends, and the rest of the world, in making this clarion call for all to hear: Where there is great crisis, there is great opportunity to make the necessary changes for our civilization to succeed. It is our duty as human beings to be worthy of the creative powers given to us by our Creator. We in the Philippines commit to do our part, in a true agapic spirit to save humankind from self-destruction, in the name of Truth, Justice, Peace, and Development, so help us God. Thank you.