Daniel BurkeThe World Needs an Agapic, Scientific Hypothesis of What Mankind Is 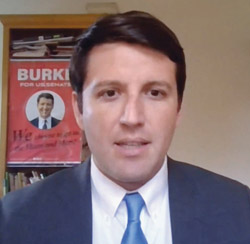 My name is Daniel Burke. I am a LaRouche independent candidate for U.S. Senate in New Jersey. I’m 33 years old; my wife and I have a 2-year-old daughter; and I’ve been a member of the LaRouche movement for about eight years.

My message is for the students and youth participating in this conference, and for the people who are thinking about them.

Four weeks ago, Helga joined a videoconference with 70 people from 12 different countries on five continents: these were primarily students and youth. She appealed to them to build an international youth movement, and since then, we’ve held a series of classes, readings and videoconferences among youth, in different languages, drawing them into this event.

Join us in building that youth movement, to inspire the tens and hundreds of thousands of students and youth we need, to get the governments of the world to adopt our approach. The LaRouche movement is not here merely to loosen the grip of popular beliefs. The nations need a new organizing principle, they need a new scientific hypothesis of what mankind is, and will be. And it has to be agapic, loving, in the divine sense.

Is it true that we are insignificant specks of dust, in a cold, amoral universe? Or, a cancer on Mother Nature, deserving of all the punishment we receive? If you reject those ideas, as you should, then what are we, in fact? The power that lies at the essence that is intrinsic to all human individuals is willful creativity—an ability shared by no animal species—to increase our power in and over the universe, by uncovering its laws—laws that are imperceptible to the mere senses.

It is very difficult, one thinks, to consider one’s personal position within such a profound scheme. It’s not easy to take seriously the dreams that all people share at some point in their early lives—of ending poverty, war, famine, and disease. It seems as though everyone has abandoned those dreams. “Who am I to say I know better?” However, consider which is healthier for your soul. Should you accept, instead, the condescending voice of cynicism that says, “No one person can make a difference; let the infinite scroll soothe your rumpled ego”? Or, should you accept those who say, “I can fix all the problems of humanity. Just eliminate human beings!”

May 9: An International Youth Conference

No. I’m asking you to join the LaRouche movement. Take the Devil by the nose, attack the corrupt and stupid axioms that allow the City of London and Wall Street fascists to gain control, and prove to yourself the true nature of mankind. We’re asking you to join us in ensuring that there’s a growing force of students, workers, scientists, teachers, farmers, doctors, nurses, poets, artists demanding a New Paradigm, and the actions needed to make it happen, beginning with Mr. LaRouche’s four economic laws. Then, in fifty years—when I would be 83 and my daughter 52—we will have seen the greatest growth in human culture, science and economy ever known in history. And we can consider that our own contributions may have been absolutely necessary for it to happen.

In two weeks, on May 9, we will hold the second international youth videoconference. Help us organize it! Work with us to mobilize the greatest number of people into meaningful action for this new paradigm. You can sign up for the youth videoconference here.And I encourage you to do it immediately.

If you, yourself, are not a youth, please share this with a youth that you know. Help us reach out to them and introduce this solution concept for humanity, amidst the crisis.