This article appears in the May 8, 2020 issue of Executive Intelligence Review. 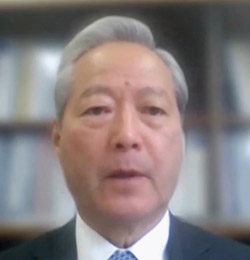 Daisuke Kotegawa is a Research Director at the Canon Institute. He was formerly an official of Japan’s Ministry of Finance and Executive Director for Japan at the IMF during the 2008 crisis.

April 26—The tragedy regarding COVID-19, especially in Italy and Spain, originated from the policy failure after the 2008 Lehman shock in Western countries. In order to enhance the economy and save the investment banks after the shock, central banks supplied excess liquidity to the market, but they failed to stimulate the economy due to the lack of real demand. Accordingly, there was a huge amount of excess liquidity in the market.

The investment banks, mainly British and American, and the hedge funds supported by them, attacked European countries which reported deficits in their budgets, such as Greece, Ireland, Portugal, Spain, Italy, for the purpose of gaining high returns within a short period of time, to escape from the risk of insolvency.

Such attacks triggered the EU policy of physical austerity centering on, among other things, reducing the costs of healthcare, which resulted in cutting the number of beds. What occurred, was the rescue of bankers who gambled in the market at the expense of the healthcare system for the general public.

The world has been ruled and destabilized by gamblers in investment banks, in particular after the Glass-Steagall Act, which separated investment banks from commercial banks, was completely abolished in 1999 by then U.S. Treasury Secretary Larry Summers. Investment bankers privatized profits, nationalized loss, and socialized risks.

At the time of the Asian crisis in the late 1990s, the bankers and government bureaucrats responsible for the breakdown were criminally prosecuted. This has brought a healthy banking system in Asia. It was not the case in the United States and Europe: There, taxpayers became victims. Tax money was used to rescue bankers and big corporations like GM, while workers were fired, and under the ongoing coronavirus crisis, workers are suffering because of that degraded healthcare system, which is the result of the austerity policy.