Economic Recovery via Infrastructure Investment: Thinking It Through 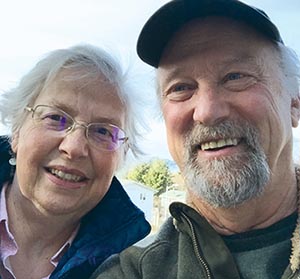 James Moore and his wife Pam.
James (“Jim”) Moore is a commercial fisherman in Alaska. He and his wife Pam have three grown children, who learned the art of hard work while growing up fishing with family in some of the most remote and beautiful places on Earth. Jim serves on boards of directors of several industry-related organizations. He describes himself as a life-long learner and has acquired a passionate interest in history and science. Jim loves building, inventing, music (violin, viola, cello), and painting. As a representative of his fishing industry he is currently collaborating with scientists from different research agencies and the University of Alaska SeaGrant program to develop a logbook program. It will collect important oceanographic data to further our understanding of changing ocean conditions.

I wholeheartedly support the President’s proposal for a major infrastructure upgrade!

It is absolutely essential that we invest in a great infrastructure upgrade, the actual physical economy, rather than in another bailout of the bankrupt international financial system. Back-filling their gambling losses, and enabling the continuance of the so-called “too big to fail” private banking cartels is not in the national interest. We should have learned that by now.

A “casino economy,” based on speculation, has replaced our former production-based economy. Since 1971, with the elimination of fixed exchange-rates between nations, and especially since the repeal of Glass-Steagall in 1999, huge amounts of capital have been diverted into short-term risky investments (which promised rapid turnover and high rates of return—gambling), rather than placed into maintaining and upgrading infrastructure, including health care infrastructure. The time is now to address this properly.

Protect the population by placing the bankrupt system into bankruptcy reorganization through a 21st Century Glass-Steagall—a promise made to the nation in the 2016 election, as I recall.

Fear and uncertainty ride in the wake of the COVID-19 crisis. A great national infrastructure upgrade, to raise the economic platform of the economy, would inspire hope and national pride while providing meaningful productive employment for millions.

Such a project could move forward only through a rebirth of the American System of Political Economy which has been instrumental in enabling great periods of dynamic growth in our nation’s history. President Trump made clear reference to this during his 2016 campaign; he must understand its relevance right now. Actualize our national potential by {directing} federal credit through a National Bank to provide low interest loans for this purpose. (This makes more sense than giving it to private investors to buy up junk bonds and devalued stocks in their own companies to justify huge bonuses and to play the stock markets.)

The American System of Physical Economy

The American System was truly revolutionary. Ours is not the so-called “free trade” money-based system that we have come to identify with over the past 75 years. It’s not Adam Smith, or Milton Friedman, or J.M. Keynes. They represent neo-liberalism, the British System. We fought the American Revolution to free ourselves from that system. The antithesis, the American System developed by Benjamin Franklin and Alexander Hamilton, and enabled through the U.S. Constitution, allowed the U.S. to prevail in the economic warfare waged against our new republic by the money power of the British Empire.

Under the brilliant direction of Hamilton, Revolutionary War debt held by the states was nationalized and used to capitalize a National Bank, which in turn directed federal {credit in the form of low-interest loans} back to the states to build infrastructure and industry, the physical economy. That investment, along with protective tariffs, increased our nation’s productive capability, so that the debt was rapidly retired. Low-interest federal credit was directed by Congress through a National Bank toward projects that would benefit the whole nation (promote the general welfare).

Our economy has been re-captured by the London-Wall Street based British System. This has happened several times in our nation’s brief history. Consider the dynamic effects of the American System as it was restored under the guidance of these great presidents: John Quincy Adams—national credit through the Second National Bank (Erie Canal); Abraham Lincoln—national credit via Lincoln Greenbacks (enabling construction of the Transcontinental Railroad while fighting a proxy war with the British-supported Confederacy); Franklin D. Roosevelt—national credit through the Reconstruction Finance Corporation (TVA, Rural Electrification, Four Corners, the arsenal of democracy—all out of the ashes of the Great Depression). We stand a good chance of recovering our national identity and mission again today under the leadership of President Donald J. Trump. An opportunity to “Make America Great Again,” indeed.

The important questions in initiating great national projects are (1) Will this benefit the nation (promote the general welfare); (2) How will it be financed and will the investment pay for itself; and (3) Are there obstacles other than funding that will have to be overcome?

Upgrade Infrastructure with Credit from a National Bank

Upgrading critical infrastructure—such as bridges and highways, railroads and water systems, and the power grid, including nuclear and hydro (please, no unreliable wind and solar!)—will elevate the economic “platform” of the nation and provide millions of people with meaningful productive jobs. Definitely, the entire nation benefits from this. We have identified the American System of directed credit through National Banking as the instrument of financing. A Third National Bank could be capitalized through bonds backed by Treasury. Consider, also, that China has indicated willingness to invest its holdings of U.S. Treasury Notes in such an infrastructure bank. It should be noted also that China has elevated 850 million of its people out of poverty over the past 30 years by means of something very much akin to the American System.

As we rebuild and upgrade our infrastructure, there will be resistance. Those who stand the most to lose will become increasingly desperate and dangerous.

The global banking cartels—that have been allowed to divert money from the physical economy into their investment scams for decades—are faced with the “everything bubble,” the mother of all debt bubbles, which has been collapsing since last fall. On September 17, the Federal Reserve Bank began a massive infusion of liquidity through overnight repurchasing agreements. That “temporary” measure has increased in size exponentially ever since, and the loan agreements are being rolled over—an inflationary bailout on steroids! To buy more time for this bankrupt system, the coronavirus was blamed for the economic collapse and more capital was infused into these banks through the CARES Act (Coronavirus Aid, Relief, and Economic Security Act). Unbelievably, the Federal Reserve has now become “lender of last resort” to the failed European central banks through an expanded repo.

The corrupt globalist cartels that have gotten fat through endless wars and drug money laundering, are getting another bailout, courtesy of the American taxpayer. Their global system is hopelessly bankrupt (two quadrillion dollars in derivatives) and cannot be saved, but they have been laying the groundwork for the next scam—the green economy! The private banking elite of the western world is intending to decide who gets a loan and who doesn’t, based on the whether the prospective borrower passes the low-carbon-footprint test. This is simply a supranational fascist takeover. What stands in the way? Donald J. Trump and the U.S. Constitution!

The war hawks are ranting and the media propaganda machine has been cranked up in a renewed effort to create enemies abroad, especially China. This is the Thucydides Trap. We are being baited into a war with the second greatest economic power on the planet, an uncalculable catastrophe for humanity and collapse of civilization. President Trump’s instincts are correct. Join with other powerful sovereign nations—China and Russia and India—to defeat mankind’s common enemies: war and famine and disease. (Those common enemies of mankind were identified as friends by the Malthusian, Bertrand Russell!)

I believe that there is a beautiful future to be built, not just for our nation, but for all humankind. Granted, that optimistic outlook is uncommon today. We have been programmed to believe that humans are the virus plaguing Planet Earth. That outlook is toxic thinking and prevents the necessary and appropriate response to the challenges we face. I confess that my optimism probably springs from a vision of the potential for humanity, and that is encouraging! I have been inspired in this outlook by the scientific work of Lyndon LaRouche on physical economy.

My hope is that these ideas will inspire courage and conviction to act on behalf of our country. They are the product of decades of personal study and reflection and not of media propaganda, or the parroting of some group-think ideology or party line. To the degree they reflect truth they are powerful, and useful, and speak for themselves.