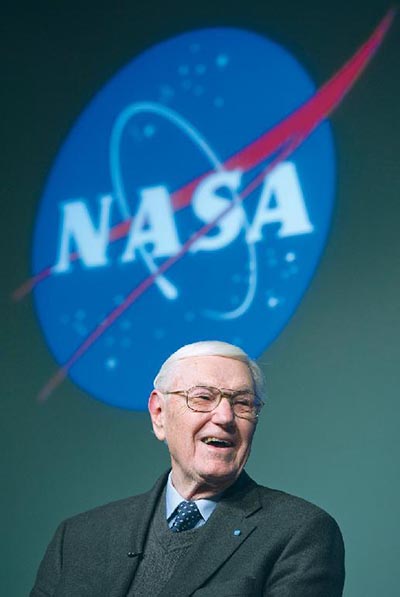 May 10—James Beggs was appointed NASA’s sixth Administrator by President Ronald Reagan and assumed the position in July 1981. His major responsibility was to oversee the new Space Shuttle system. During his tenure as Administrator, from 1981 to 1985, he oversaw 22 Space Shuttle missions. But his concern was to point the space agency toward the future. Following Wernher von Braun’s program, he said, the “next logical step,” after creating the transportation infrastructure of the Space Shuttle, was a permanently manned space station. From there we would go back to the Moon, to Mars, and beyond.

James Beggs’ tenure at NASA was abruptly interrupted when, on December 2, 1985, the Department of Justice handed down indictments of Beggs and three former colleagues, for work done a decade before he was NASA Administrator. Reportedly pressured by the White House, Beggs took a leave of absence from NASA. A month later, he was not at the helm when the Space Shuttle Challenger exploded 73 seconds after lift-off, killing all seven astronauts on board.

After all of the charges against Beggs and the other defendants were dropped, Beggs established a consulting firm and became a vocal public advocate for a far-sighted space program. He did a great deal of public speaking and joined citizens’ organizations that supported NASA and the space industry.

James Beggs believed that space technology should be available to all countries, and that NASA should cooperate with all space-faring nations, “even the Soviet Union.” In remarks at the Lunar Bases conference in Washington, D.C. in October 1985, Beggs said:

We expect our friends and allies to accept President Reagan’s invitation to join with us in developing the space station.... An internationally developed lunar base might prove an irresistible lure to the Soviets. And if they were to join with us, I believe that it would certainly enhance the prospects for peace in the world and in space.

The Next Logical Step

In a talk in London for the Wilbur and Orville Wright Memorial Lecture on December 1984, Beggs presented a sweeping description of the future:

The advanced technologies we will employ on the Space Station will spur scientific exploration of the Solar System and the universe by both manned and unmanned vehicles. They will invigorate Earth applications and the study of Earth as a global system. And they will stimulate sustained research and development on innovative systems and techniques.

We will be able to use the microgravity environment to develop any number of promising manufacturing enterprises, such as making pure crystals for electronic components, new alloys for industry and new medicines to help fight such diseases as cancer, diabetes, and hemophilia. 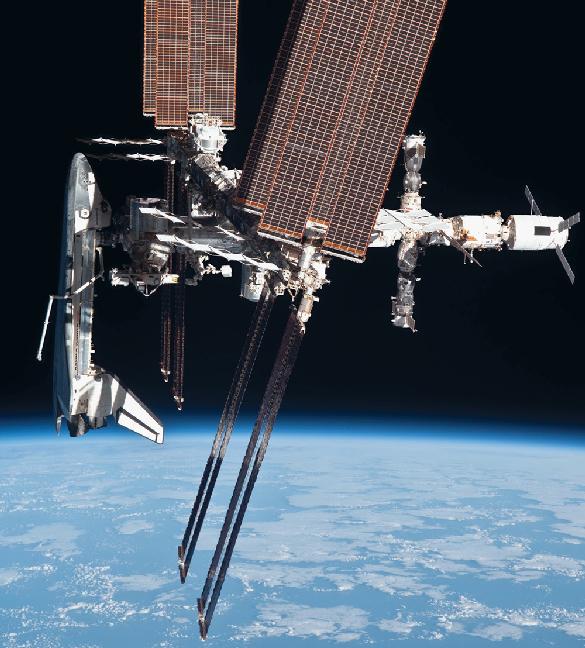 NASA/Paolo Nespoli
The International Space Station and the docked Space Shuttle Endeavour, taken from Soyuz TMA-20 on May 23, 2011.

The Space Station will grow and evolve as new needs develop, and the effort will span decades. It will be the largest and most difficult international project of the space age. By learning to work together on a project of this scope, we will be laying the groundwork for even more extensive joint efforts in the future.

Today we go into space routinely and dream of returning to the Moon and going to Mars to build permanent human settlements. As President Reagan said at the Goddard Space Flight Center in Maryland back in August: Each technological breakthrough enables us to work from a higher plateau of knowledge.

And I believe that as we continue to ascend those plateaus, we will continue to unleash the energy, creativity and imagination that break the barriers to progress and allow free people to go as high as their aspirations will take them.

Beggs had taken the NASA job in 1981 based on his agreement with the President that NASA would have new initiatives like the Space Station. President Reagan’s outlook on the future of space cohered with that of Beggs. And Beggs was also a strong supporter of Reagan’s Strategic Defense Initiative (SDI) program, which he reasoned could not be developed without a close relationship with a strong civilian space program. Beggs brought Gen. James Abrahamson into NASA. Gen. Abrahamson was redeployed to head the new SDI program.

Less than a year after he became NASA Administrator, Beggs told this author in an interview that the space station was “the next logical step” in man’s exploration of space, “to proceed to bring things step by step to commercial reality.” “You should be able to work in space and work the problems out,” he asserted. Beggs repeatedly outlined the exciting future missions the space station would enable, and its scientific utility.

In his State of the Union address in January 1984, President Reagan endorsed Administrator Beggs’ proposal, and tasked NASA to build an Earth-orbiting space station within a decade. In a pamphlet he wrote, titled, Space Station: The Next Logical Step, Beggs outlined that the facilities of the space station would include co-orbiting unmanned platforms for experiments, facilities for repairing equipment, an Orbiting Maneuvering Vehicle for EVAs, and more.

But the space station, and all of NASA’s other planned future missions, did not proceed unopposed. In his talk in London in 1984, Beggs described “nay-sayers and disbelievers who have ignored imagination,” and its role as the “wellspring of the fundamental human drive to explore, to find new knowledge, and settle new frontiers.” The two examples of “nay-sayers” he used were the British Luddites and the Club of Rome: “The fundamental error made by the Luddites, the Club of Rome, indeed, by the Malthusians and others who have shared their philosophy, is one of forgetfulness. They forgot to remember that the human imagination is not finite.”

As he often did, Beggs engaged Shakespeare to speak for him. In a 1987 Commentary in Space Times, Beggs wrote:

As we approach the third millennium, we have never had greater opportunities. I believe our greatest achievements in space lie ahead; the only hazard is a lack of will. As Shakespeare wrote in Measure for Measure, “Our doubts are traitors, and make us lose the good we oft might win, by fearing to attempt.”

What Blew Up Challenger

On the early morning of January 28, 1986 James Beggs was at NASA headquarters in Washington, even though he was on a “leave of absence,” thanks to the indictment the previous month. The Space Shuttle Challenger was on the launch pad at Cape Canaveral. Knowing the temperature was unusually low at the Cape, colleagues asked Beggs if he thought the Shuttle would launch. “Brrrr. It’s too cold,” was the Administrator’s reply. 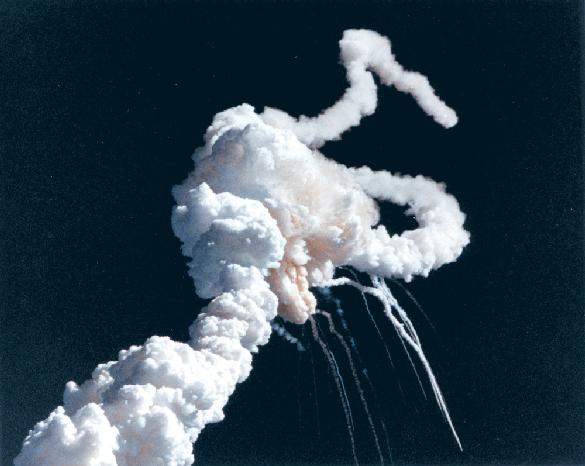 William Graham, with no experience in aerospace or anything related, was appointed deputy to Beggs against Beggs’ disapproval. When the indictments forced Beggs “on leave,” Graham became acting Administrator. When it became necessary for a decision, whether or not to launch Challenger that cold morning, Graham was nowhere to be found. Beggs later said it wouldn’t have made any difference.

Thus it was not an O-ring that caused the Shuttle accident—ultimately it was the Justice Department.

In his Commentary in the Sept.-Oct. 1987 issue of the Space Times, Beggs wrote: “One of the devastating results of the Challenger accident is that our momentum has slowed. We must move to regain it.”

As U.S. Attorney for Massachusetts, 1983-86, William Weld was a central figure in the October 1986 Boston indictments of Lyndon LaRouche and his associates. (Another key figure in prosecuting LaRouche was Robert Mueller III, who announced the LaRouche indictments on October 7 as Acting U.S. Attorney, Weld having just been made head of the Justice Department’s Criminal Division in Washington.) LaRouche had informally advised Reagan’s National Security Council concerning his conception of the Strategic Defense Initiative, announced by President Reagan in March 1983. When the Boston prosecutions did not produce guilty verdicts, Weld had LaRouche and associates prosecuted again in Federal Court in Alexandria, Virginia just outside the nation’s Capital. 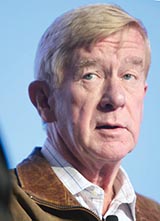 On June 19, 1987, all charges were dropped against Beggs and his co-defendants, when William Weld could not sensibly explain why 82 boxes (!) of exculpatory material that the defense had obtained through the Freedom of Information Act had been overlooked by the prosecution. In a June 22 press conference in Washington, D.C. when Weld was asked if the government should apologize to Beggs, Weld said he would “decline the invitation to embrace the language of apology” because the Department acted in good faith! He said that the Department did not find the 82 boxes of exculpatory material because of bureaucratic lapses.

The following year, when he was leaving office, U.S. Attorney General Edwin Meese, in a hand-delivered letter, offered Beggs “a profound apology on behalf of the Federal government and the Department.” It was reported that President Reagan apologized to Beggs in a phone call. NASA’s slap in the face to the Justice Department came two years later, when Beggs received the agency’s highest award, the Distinguished Service Medal, honored for his contributions to space and aeronautics.

Beggs never wavered in his optimism for the future, and in that he represented the best of the World War II generation to which he belonged. James Beggs passed away on April 23, at the age of 94.