This transcript appears in the May 22, 2020 issue of Executive Intelligence Review.

A Quality of Leadership: De Gaulle and FDR

This is the edited transcript of the opening remarks by Mr. Cheminade, founder and head of the French political party, Solidarité & Progrès. He spoke to the Schiller Institute May 9 conference from France. Subheads and embedded links have been added. A video of his presentation is available here. 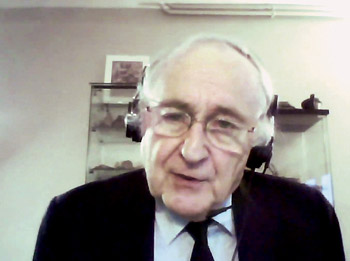 I greet all of you with great hope. I have something to add to our reflections to throw some prejudices overboard and raise the issue of our community of principle to define our future beyond and above the issue in itself.

The defeat of Nazism and fascism can never be forgotten. And the followers of those who then were united to fight against them should now, today, raise their political conscience to the level which allowed our victory. That is why I find it essential for the understanding of our common past, and moreover, the accomplishment of our future, to raise the too-often misunderstood question of the relations of the Free French and the then American administration—of Charles de Gaulle and Franklin Delano Roosevelt, during World War II.

I wrote have written about de Gaulle and Roosevelt and our common security, on behalf of our common future. Lyndon LaRouche wrote with me, a book called, France after de Gaulle [La France après de Gaulle]. He wrote most of it, but we had many discussions about it.

There is a dark legend about the relations between Roosevelt and de Gaulle, and we should dissipate the unnecessary and evil clouds of that legend. The legend says that Roosevelt and de Gaulle utterly disliked each other, even to the level of considering each other as enemies. Many Americans say that Roosevelt considered de Gaulle as an anti-American proto-fascist; and many French pretend that Roosevelt was an American imperialist who wanted to take over the world. It is essential today to rise above such vulgar, petty, and subordinate quarrels. Both de Gaulle and Roosevelt not only fought together for the same cause, but both overcame the prejudices and stereotypes of their time and their social environment. True, they dissented on many issues during the war. I will mention two and show that both issues were solved at a higher level.

First, when Roosevelt and Churchill decided to meet at what at the time was French Morocco, in Casablanca, in January 1943, de Gaulle was furious because the decision was made without asking France first. He nonetheless agreed to go to Casablanca, and he met Roosevelt. After that meeting, Roosevelt said that de Gaulle was maybe an unbearable fellow, but he was a much better patriot than all other Frenchman of those times.

Second, when the American GIs disembarked in France, de Gaulle was again furious—he was often furious—because he had not been informed in advance. And he flipped because the American administration had planted a live military government in the occupied territories and the Am-Franc currency, as if France had not had an established government, the Free French Government—his government—thought de Gaulle. The issue was solved when Roosevelt and Eisenhower allowed de Gaulle’s Free French forces to enter Paris before everybody else, in August 1944.

Most of the differences between de Gaulle and Roosevelt were solved because both men pushed those differences aside. De Gaulle understood that a certain French-American team tried to prevent or sabotage the possibility of a meeting between President Roosevelt and himself. Roosevelt understood that his services—mainly at the time in the State Department, or people like Robert Murphy in Algiers, and mainly, of course, Winston Churchill himself—wanted to antagonize him against de Gaulle. He understood that the American people considered that instead, de Gaulle was a true representative of the French nation.

De Gaulle, who met Roosevelt three times between July 6 and July 9, 1944, said that both represented the interests of their respective nations, but had no hostile feelings against each other, and on the contrary, had a commitment to common values. After Roosevelt died, de Gaulle stressed that if he had lived longer, once the war had been won, that he and FDR would certainly have had time for a long dialogue, saying he was sure that FDR would have understood and appreciated the reasons which guided our actions, as the leaders of France and the United States.

Then, de Gaulle was politically eliminated. In July 1955, de Gaulle told Douglas Dillon, the American ambassador in Paris, “I always remember my difficulties with President Roosevelt. And retrospectively, I consider that we were both right.” And he later added, “If he [Roosevelt] had lived longer, world history would have been so different.” De Gaulle always kept an autographed picture of Roosevelt over his desk in his house at La Boisserie.

At least four lessons have to be learned for today from those decisive moments.

First, always defend the cause of your nation, whatever your personal feelings or temporary inclinations about the persons involved. Not as a thing in itself, but as a commitment to a better, more human future for the whole of humanity.

Second, never trust the services trying to flatter or confuse you. Roosevelt was right to fear the amateurism and unreliability of the French services, which were heavily under British influence. De Gaulle feared them as well. Roosevelt despised the intrigues around him, and the inclinations of the State Department bureaucracy; de Gaulle, too.

The worst enemies are sometimes inside your own government, as was said before: The later assassination attempts against de Gaulle in the 1960s are proof of it.

Why is that so important today? Because de Gaulle and Roosevelt have something very deep in common: They were guided by their mission, both, against all odds. They were not like today’s politicians, an animal circus. And because from both we should learn to put parochial, petty issues aside and go for the best in us, for the advantage of the other, and, more profoundly today, for the coincidentia oppositorum, as Nicholas of Cusa and Helga Zepp-LaRouche very often tell us. They are coming at a higher level than the apparent geopolitical confrontations, which is the very condition, to come at a higher level—the very condition for creative policies.

Four, never trust those that want to divide us from our mission: divide and rule, what Churchill always tried to do—unfortunately, he had a perverse gift for doing bad things. Let’s always look above the meanness of the British Empire. It’s a trap and it’s the last trap we should get rid of. Remember what Churchill said about World War II. He was asked, “What were your worst moments?” and he answered, “The heaviest cross I had to bear was de Gaulle’s Cross of Lorraine.”

To Win Our Future

To win our future, we have to look at it as if we were in the future, inspired by those in our past who created a future for us. This is what Roosevelt did in 1933, with the Glass-Steagall Act, and de Gaulle did as well in 1945, he did the same. This is what President Kennedy did, then strongly supported by de Gaulle, in the Cuban Missile Crisis—de Gaulle was the first to support Kennedy at that moment.

Never think that Roosevelt was anti-French or de Gaulle anti-American. We all, who are their children and grandchildren, are inspired by both of them and by their fighting spirit—which they had in common—on this 75th anniversary. Today our very future is at stake, as never before. And as Lyndon LaRouche understood, we are facing our tragic fate. Let’s make of this tragedy an opportunity.

On his June 18, 1940 call, his famous call of 1940 from London, de Gaulle addressed those who were desperate because of the French defeat. He said, stop it. This is not a European conflict; it is an international war of civilizations. The industrial power of the United States has not yet been thrown onto the battlefield. We are destined to overcome, help me. Help me.

I had to say this on this May 9th, because we need to muster our best sources of inspiration to stand up and fight. Now, with the neighborly, demanding, inestimable, and exemplary contributions of Lyndon LaRouche’s writings and life, with his profound ideas, and his deep emotional commitment, we have that in our hands to create, I would say, a universal melting pot, where all will be physically and mentally fed. That is our challenge on this May 9th.