This transcript appears in the May 22, 2020 issue of Executive Intelligence Review.

There Is a Positive Path Forward: Will We Take It?

This is the edited transcription of the opening remarks by Mr. Jatras, a former U.S. diplomat and foreign policy advisor to the U.S. Senate Republican leadership, to the Schiller Institute conference on May 9. Subheads have been added. A video of his presentation is available here. 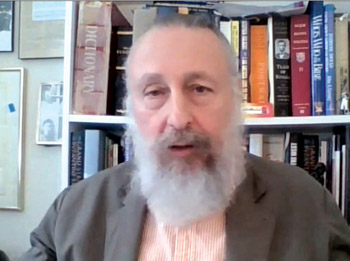 Thank you so much. I want to express my appreciation to Mrs. Helga Zepp-LaRouche and to the Schiller Institute for inviting me to speak in this very distinguished company.

I’ve just been pondering the contrast and complementarity between the clip from Mr. Lyndon LaRouche of several years ago, talking about the need for optimism, and then juxtaposing that to not necessarily pessimism, but the experience we all have, that our hopes for a more constructive future, for a more cooperative future, on so many occasions have been dashed. Certainly, that was the case at the end of World War II, when we had the “Spirit of the Elbe,” but the promise it held out was not fulfilled for reasons we all understand. We had another chance in 1991, when Communism ended, and it was possible to say, “Fine, we had that wreck from the 20th Century, we can now put it behind us. Let’s try to move forward on a more cooperative and constructive basis.” That unfortunately did not happen either.

As an American, I’m sorry to have to say all this, what many of us saw, as I did, working as I was at the State Department at the time, and later for the U.S. Senate, was the apparatus of power as it worked in Washington.

That power apparatus looked at the change in the global situation as simply an opportunity for us to claim, in the name of American leadership, global domination; as two ideologists of neo-conservatism put it, “benevolent global hegemony.” Thirty years have passed in essentially a wasted opportunity, making what should have been a positive path forward for humanity, one that now threatens its very existence.

One looks back, for example, that during the time of the first Cold War between the United States and the Soviet Union, there was at least I think on both sides, a very serious appreciation that if something were to go wrong, and a war were to take place, that could very well be the end of humanity, and so safeguards had to be put in place to make sure that wouldn’t happen. Instead, as we have embarked on what many people are calling a new Cold War with Russia, those safeguards are being systematically dismantled.

There’s almost a sense of a reckless glee on the part of some elements of the American establishment, that we can poke the Russians, we can poke the Chinese, we can poke the Iranians, or the Venezuelans, or the North Koreans, whoever. And what are they going to do about it, because we’re big and powerful. That’s not a good way to behave; that’s likely to result in something unexpected and devastating that nobody really wanted, nobody really expected.

So, I think we find ourselves at a crossroads, between, on the one hand, wanting to have that realistic optimism that Mr. LaRouche spoke of; that as human beings, we always have a potential. That with God’s help, there is always something good that can happen if we go about things intelligently and realistically. On the other hand, to have no illusions about what the dangers are, and how other actors will double down on mistakes that have been made in the past.

The Problem Is with Washington

It has to be, so to speak, the big boys, who can come to a meeting of the minds. And I would say, in a certain sense, similar to what we saw with the concert of Europe in the 19th Century, to make sure that the rules of the road are understood. That we have an understanding of not stepping on the other powers’ toes in areas that are vital to their national interest, but negligible to ours.

But then you’re very hard pressed to say, “And who in his administration actually agrees with him about that?” Certainly not Mr. Pompeo, not Mr. Esper over at the Pentagon, not Mr. O’Brien at the NSC. For reasons that I’m not going to speculate on, he has managed to assemble an administration composed of people who all want to double down on the same errors that have been made in the last few decades.

Can Trump Break Free To Do What’s Right?

Now, can he break free of that? This has been the big imponderable that has faced us for the last three years as the “Russia, Russia, Russia” hysteria has been ginned up. Now we’re seeing in the context of the coronavirus, a “China, China, China” hysteria being ginned up. So, the short-term prospects of a lightbulb going on in Washington, of President Trump saying, “I now have the power and determination to go do this, this, and this that need to be done,”—again, one wants to be optimistic, but you try to see the path of how that can take place: How those ideas can not only stir a response in the President’s mind, to which I think he would be receptive, but he then actually carrying them out, given all of the bureaucratic resistance to him.

With regard to not only the epidemiological, but the economic and financial wreckage that’s being caused in the wake of this virus, maybe, as in other crisis situations, this also gives us grounds for some optimism. We see a lot of people at the grassroots level beginning to rebel against what they’re being told they must do in terms of lockdown. In many cases, we know many of the edicts are quite arbitrary, and nonsensical in terms of what people are being told to do. And I think a lot of people are expressing their opposition to that. I think Helga is right about the widespread threat of a breakdown of our infrastructure, a breakdown in our food supply system, that is even going to hit a country like the United States, much less what it is going to do elsewhere in the world.

I’ll give you a case in point. We are now looking at the possibility of meat shortages in American supermarkets, a large part of this being caused by the fact that only certain processors are allowed to sell to certain customers under Federal law. It’s not even possible so far to change those regulations so that other suppliers can get that food from the farmers to the people who need it. The question is, can this crisis result in some step away from the domination of an establishment that has essentially run this country into the ground, and is facing the world with a new world war, and perhaps the final world war. This is what we do not know.

So, I think what we all need to focus on is that there is a path forward; it’s a positive path forward. We all know what the contours are, they’ve been very clearly set out by people like Helga Zepp-LaRouche and the Schiller Institute, and of course by the late Lyndon LaRouche. The question is, can the dislocations that are caused by the current crisis result in an opportunity for American policymakers, and above all, President Trump to finally say, “We need to break free of these shackles that have doomed the policies of the past, and do what needs to be done that should be evident to everyone.”