Brother, Can You Spare a Job? As of the second week of May, 50 million Americans are now unemployed or forced into part-time employment. Even before this employment collapse, about 44 million, did not have productive (e.g., goods-producing) employment—manufacturing, construction, mining and drilling, agriculture and forestry, transportation—nor were they scientists or engineers. This exposed a shocking fact: Before the coronavirus crisis struck, the old joke had come true: “Millions are idle!—fortunately, most of them have jobs.” Some 69% of the American labor force (including those who were unemployed, had stopped looking and dropped out of the labor force) did not have productive employment. This was almost 120 million people. (See Figure 1.) Now, a very large share of those Americans is truly unemployed, or forced into part-time work.

This shows the absurdity of textbook definitions of unemployment: someone wants to work but doesn’t have a paying job, i.e., not receiving income.

Contrast that monetarist view to Lyndon LaRouche’s concept which started from the standpoint of physical economy: of a person’s participation in the process of producing the physical goods, and related necessary services (such as health and education), required to increase society’s power to provide an improved standard of living and culture to a growing population—a power Lyndon LaRouche referred to as potential relative population-density. Having a “job” in the drug trade and making $1 million a year is not actual productive employment. LaRouche developed a unique pedagogy of “bar diagrams” (see Figure 4) to focus our attention on that actual physical-reproductive process:

Since potential relative population-density is a material relationship of society to nature, this potential is determined most immediately solely through activities in the form of production of goods…. This approach must replace the methods of national-income analysis associated with the U.S.A. usage of “Gross National Product.”

From that standpoint, now look at the U.S. and world economies. 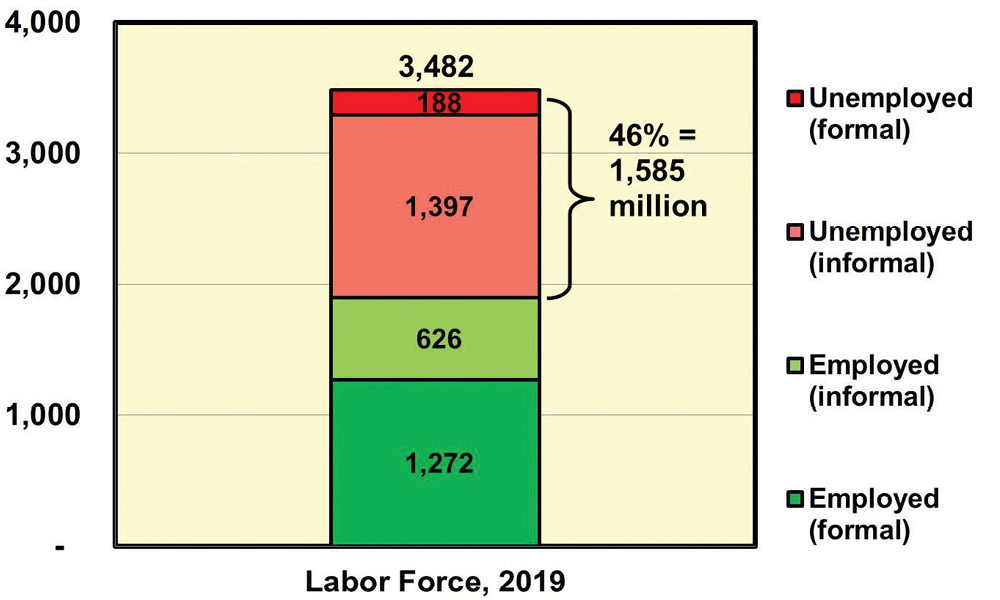 Figure 1 shows the result of five decades of deindustrialization and deterioration of the American economy, once the “Arsenal of Democracy,” into a globalized “service economy” which is now in collapse. Some service sector jobs are useful and necessary, such as healthcare and education, and are also productive in that sense; but the lion’s share of service jobs in the American economy today are not—such as financial, hospitality, and so-called professional business services. Taken together with the unemployed, this amounts to a shocking 73% of the current labor force. Moreover, many of the roughly 5 million Americans who had productive jobs and are now not working (and this is almost 25% unemployment among America’s productive workforce), face the potential of their jobs not coming back. How many airline employees, oil drilling company employees, and auto industry employees will be working in those industries next year? If we look at the world labor force from the same physical-economic standpoint, as shown in Figure 2, we find that total real unemployment for the planet can be estimated at about 46% of the labor force. 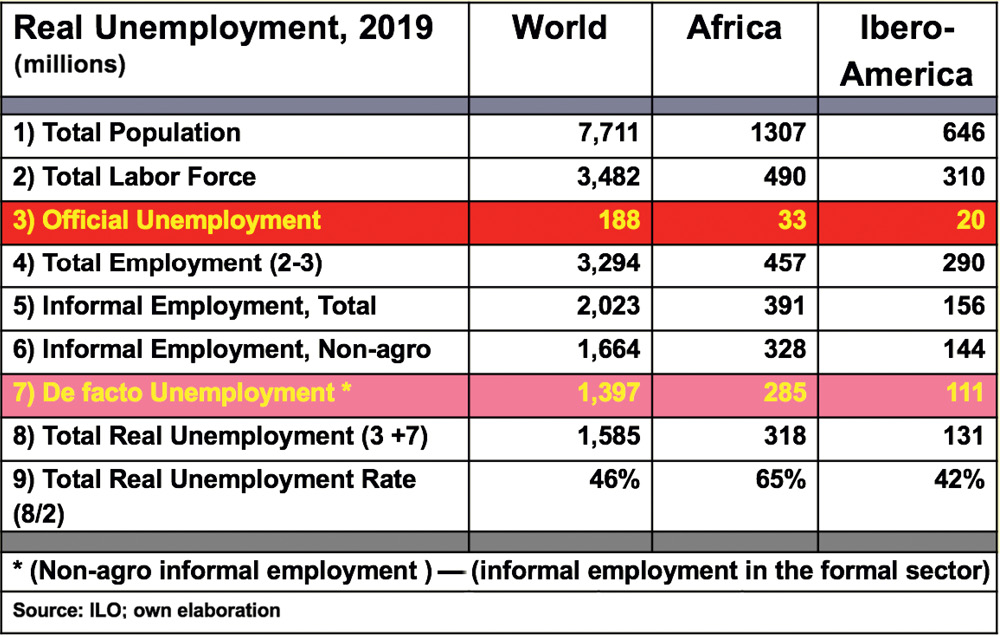 That is 1.585 billion people who do not produce any physical economic value because, over the past half century and more, they have been dumped onto the human scrap heap by the British imperial system of the City of London and Wall Street—and barely survive from day to day. In the case of Africa the real unemployment rate is 65%. In the case of Ibero-America it is 42%. (See Figure 3.)

We arrived at these numbers by not only looking at official unemployment statistics (which grossly understate the reality), but also the masses of people who hustle and scramble so that they and their families can eat from one day to the next, but who don’t actually produce anything. This is the case with so-called “informal employment” worldwide, which involves a staggering number of people: more than two billion, in fact, which more than 60% of the planet’s total labor force. Youth are particularly victimized by this “informal” disease—in the 15-24 age cohort worldwide, 77% of all employment is informal. According to the definition provided by the International Labor Organization (ILO):

The informal sector consists of units engaged in the production of goods or services with the primary objective of generating employment and incomes to the persons concerned…. The main intended destination of the production is wholly for own final use.

This includes: (1) Informal employment in agriculture: desperately poor peasants and their families engaged in subsistence agriculture (this is about 25% of the total informal employment); (2) A smaller number of “informal” (or off the books) employees in the formal sector as such (about 10% of the total); and (3) The deregulated netherworld of street salesmen, service workers, and—in the worst cases—virtual slaves of Dope, Inc.’s drug trade and prostitution/pornography black economy, run by the British Empire’s banks (about two-thirds of the total).

It can be argued that the first group at least produces enough for their own and their families’ immediate consumption, albeit at a horribly low level of productivity. We consider them as “employed,” along with the second group, in an effort to present a conservative estimate of real unemployment. The third group, however, produces zero net physical economic value. They are de facto unemployed, from the standpoint of the physical economy. Now that the coronavirus pandemic is striking the underdeveloped sector with a vengeance, even the meager daily incomes and food supply of the gigantic informal sector is going up in smoke. EIRNS/Mark Sonnenblick
A haunting picture of a young Peruvian girl—hungry, exhausted, frightened, with no hope for the future, yet crying out to the heavens for justice—chewing coca leaves in order to be able to perform another day of exhausting “informal labor” in the fields.

The ILO estimates that people in the informal sector have already had a 75-85% drop in income. As ILO Director-General Guy Ryder succinctly put it on April 29: “These are the real faces of the world of work. If we don’t help them now, they will simply perish.” There is no greater source of waste on this planet than this mass unemployment—and resultant death by disease and starvation—of millions and even billions of precious human beings. The path to recovery lies in productively employing and mobilizing them to vastly increase the productive powers of labor—the only actual source of wealth in a human economy. LaRouche on the Bar Diagrams

This labor-force is, so to speak, the input to the productive process defined by production of goods and associated transportation. The right-hand bar depicts the input-output relationships….

This geometric proportioning of the elements of the reproductive cycle is the basic geometry of the economic process for purposes of defining national income.

This approach must replace the methods of national-income analysis associated with the U.S.A. usage of “Gross National Product,” and the “Gross Domestic Product” usages of the UNO and various nations.

(From Lyndon LaRouche’s 1981 report, “The Principles of Statecraft for Defining a New ‘North-South’ Order.” )