The emergency food aid measures we must now take to prevent a “hunger pandemic,” alongside the healthcare gear-up against COVID-19, create the momentum for a new food and agriculture system serving the interests of all nations, now and in the future. This would put an end to the practices of the Anglo-globalist cartel system of food and farm control, which made the modern world vulnerable to food scarcity and disease in the first place.

Two basic considerations are involved: What are the volumes of production needed? What are the factors required to achieve this?

At the time of this report, the 2019–2020 world grains harvest has fortunately had no major crop disasters, which is important for meeting huge food aid needs from the pandemic. But the world harvest, from the current level of 2.7 billion tons yearly of grains production (all types—wheat, rice, corn), must be doubled as soon as possible. The level of 5.5-6 billion tons of cereals grains a year can provide all persons of our 7.8 billion world population with sufficient direct, and indirect (animal protein), consumption, as well as reserves against disaster and supplies for a growing population.

Even before COVID-19, world hunger, which has been steadily increasing for the past four years, reached the level of 821 million people chronically food “insecure” (i.e., without enough food, for lack of the means to buy it, or because of food scarcity). Of those, 100 million relied on food aid, or they would perish. In the coming months, that figure will rise to at least 265 million, according to estimates by the World Food Program, whose Director-General David Beasley told the UN Security Council April 23, that we face a hunger pandemic of “Biblical proportions.” 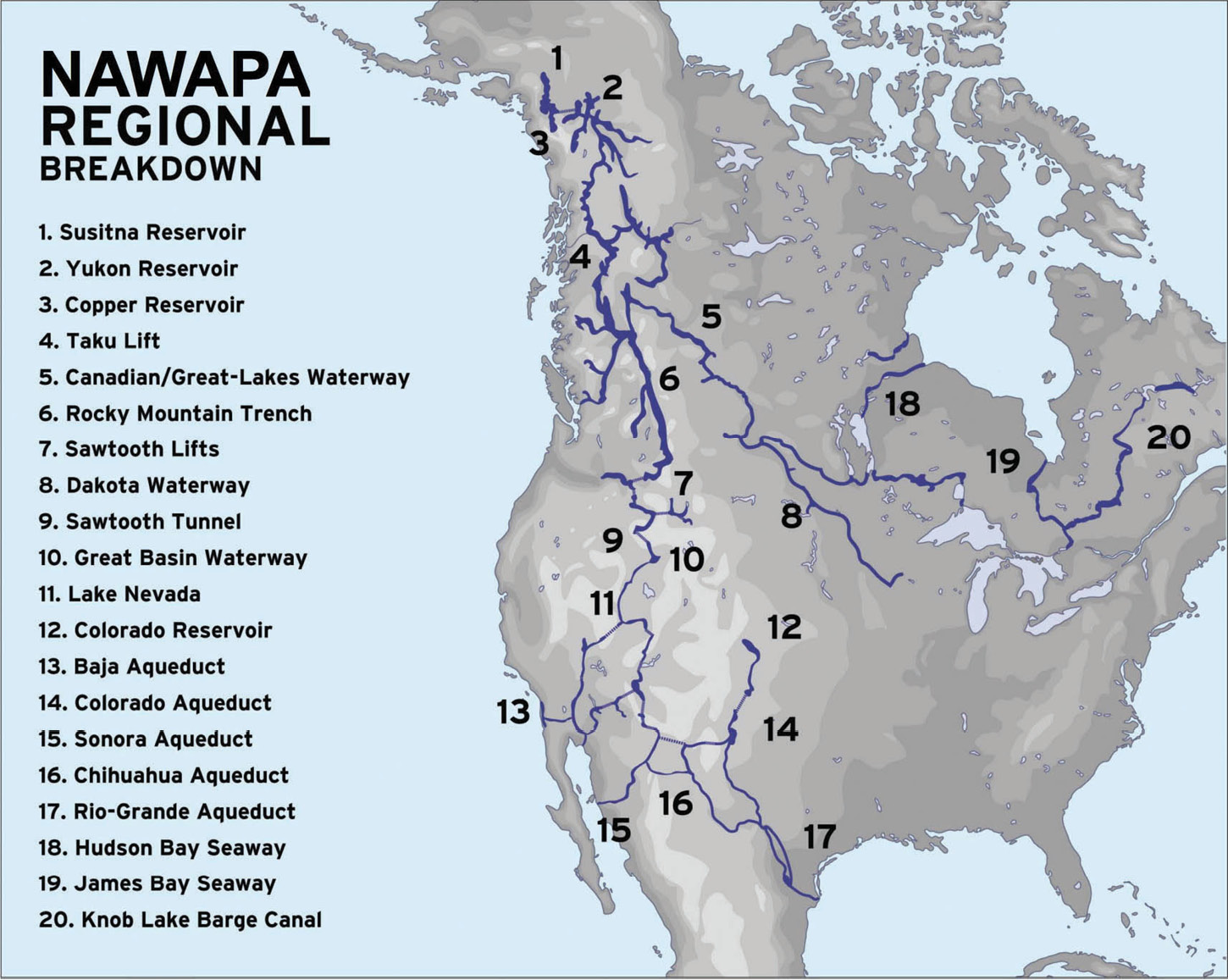 Land and Water: Basic elements in the equation for increasing agricultural output are land and water, both of which can be increased. Africa is in the forefront, with half of all the world’s remaining arable land not yet under cultivation. Sizable areas remain for development in the Americas and elsewhere.

Apart from soil fertility (which can be manmade, as in Brazil’s Cerrado) and favorable temperature regimes, water is the key element. Launching the work needed on the backlog of major hydraulic projects on every continent will open new farmlands. For the United States, Canada, and Mexico, the North American Water and Power Alliance (NAWAPA) will divert some 15% of run-off now flowing toward the Arctic in the Mackenzie and Alaska River Basins, taking it southward to the dry southwest of the continent. This will make irrigation possible from the Canadian Prairies all the way to western Mexico. NAWAPA had backing since the 1960s in Washington, DC, but was thwarted by the London/Wall Street financial crowd. 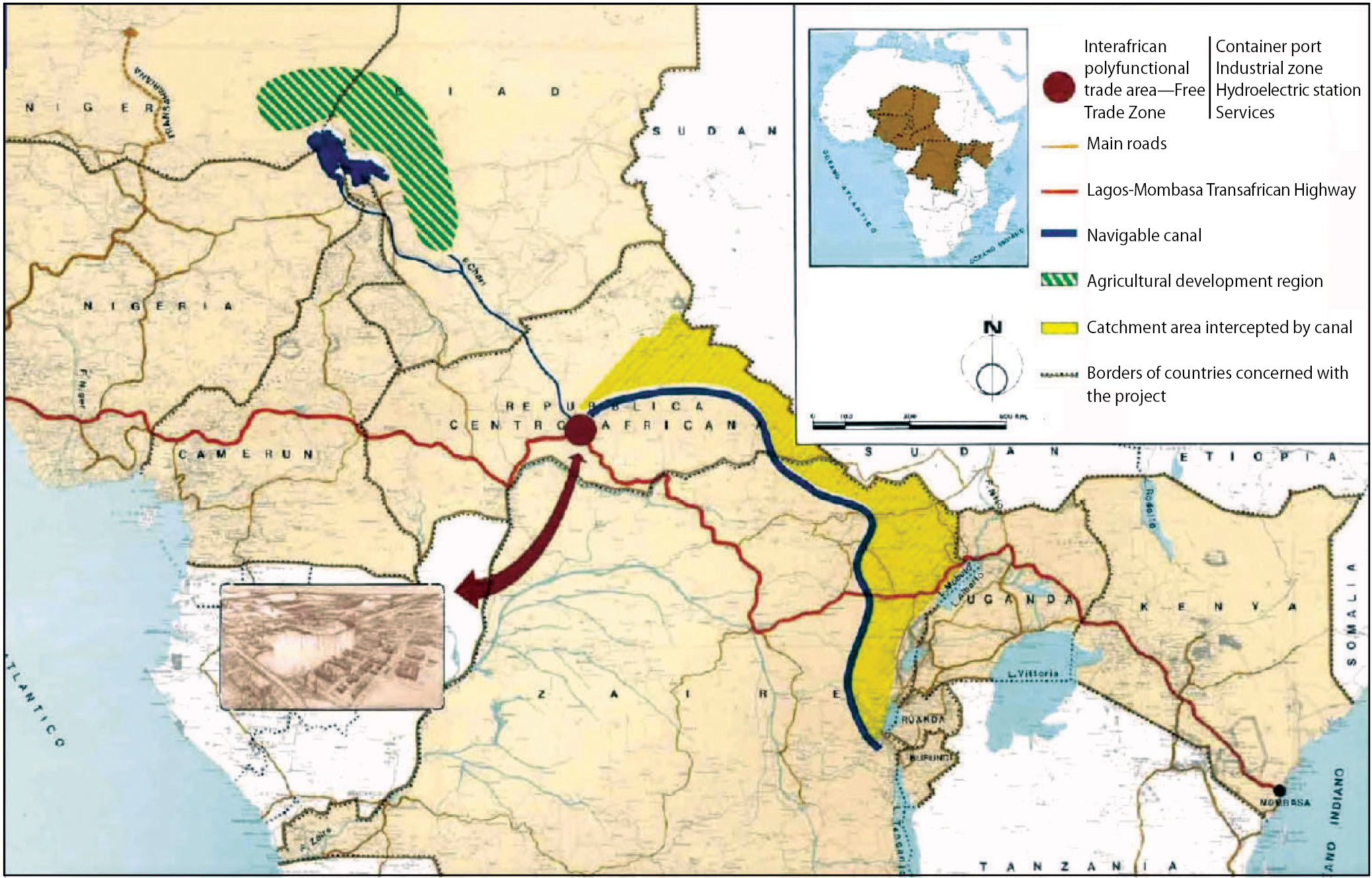 First proposed in the 1970s, the TransAqua project will divert water from the Congo River Basin in the Democratic Republic of Congo to resupply water to the Lake Chad Basin, benefitting the entire Sub-Saharan region with new agriculture, transportation, power and water management systems.

In Africa, the TransAqua Project, first proposed in the 1970s, will resupply water to the Lake Chad Basin, benefitting the entire Sub-Saharan region, by diverting a small percentage of the flow of the Congo River Basin, which in turn will benefit from new agriculture, transportation, power, and water management systems.

In addition to these large-scale conveyance programs—whose most recent outstanding example is China’s South-North Water Transfer Project, moving water (716 miles) from the Yangtze to the Yellow River Basin—there also is vast agriculture potential from desalinated sea and inland saline waters, through nuclear power.

Mechanization: Farm equipment enables high production, with specialized planting and harvesting machinery, and tractors for all purposes. The highest productivity comes from conforming the size and power of the equipment to the scale of operation best for that region. For example, in parts of Brazil or the U.S. farm belt, 48-row corn or soybean planters serve extensive, high-yield farming. In Japan, micro-farms produce high-yield rice, with highly advanced, very small scale planters, drones, and other machines. Germany and Belarus are famous for powerful tractors of all sizes for Eurasian agriculture.

Part of the same picture, is the necessity for high-technology crop storage, and food processing and handling. Food preservation through irradiation will prevent losses, allowing huge gains in supplies, as will more extensive use of long-standing methods, from freeze-drying to ultra-high-temperature pasteurization.

Bioscience: Hybridization and genetic engineering revolutionized crop yields over the past century, but more breakthroughs are possible with R&D, such as CRISPR and other techniques, to improve even the basic profile of crops. For example, there is the C4 Rice Project, to boost yields by half through more efficient photosynthesis. Most urgent is to conduct the basic research to protect against plant and animal diseases, especially zoönoses—diseases which jump from animal to man. COVID-19 is in this category. Currently, there is no vaccine for African swine fever, highly lethal and contagious among pigs. One-quarter of the world’s pork supply was lost in 2019 to this disease.

Power: Electricity and all forms of power are critical to every phase of modern food production, beginning with the manufacturing of all the inputs to water systems, irrigation structures, farm and food processing machinery, and storage and transportation. Cooling raw milk in bulk tanks was revolutionary to dairy farming in the 1930s; it improved the average diet with more milk. Even farmers’ household electricity is vital to productivity, as the Tennessee Valley Authority showed, when farm output increased after their homes got lighting, heating, refrigeration, cook-stoves, in-home water, laundry machines, and similar advances.

Energy-Flux Density: The metric involved in this improvement is energy-flux density. This refers to the density of energy brought to bear across the relevant area of function, so that denser amounts create the condition for higher productivity. The rank order of energy itself is evident in the differing sources, going from low-density energy sources such as wood-burning, up through coal, oil, gas, nuclear fission, and, one day, thermonuclear fusion. With high-energy-flux density, farms of a half-acre—using aeroponics, or hydroponics—can yield tons of food.

The workforce needed in agriculture, from “field to fork,” is very large, counting those who produce all the inputs, and even using mechanization. This means millions of new jobs. At the forefront are two concepts—the astronaut farmer, and family-scale farming. Space-age agriculture involves satellite monitoring, global positioning, data banks, drones, and more. In command is the astronaut farmer, who must become the norm the world over. The other requisite is family farming. The ingenuity and mission of family farm members—with the living standard, education, and science to go along—are the best guarantees of food security for every nation and worldwide.

‘Give Us This Day Our Daily Bread’

Instead of answering this universal prayer, governments have allowed the monetarist casino system of the past 50 years to de-structure sound agriculture, and even prevent agro-industrial development in Africa at all, a land of vast agriculture potential, home to 1.3 billion people. Governments must exert sovereignty, for the people. Break up the cartels, whose multi-nationals are now monopolizing all food groups and inputs including grains, meat, dairy, produce, fertilizer, agro-chemicals, and even seeds—the means to life.

Because of cartel “global sourcing,” commodity speculation, consolidation of food processing, and other practices, millions of people are needlessly suffering hunger, while farmers in the U.S. and elsewhere are forced to destroy food—kill off meat animals, dump milk. This must stop. No one should make speculative profits off food, while the food producers go broke. Put in parity-based farm production prices. No farm foreclosures. Take all other emergency measures to save farming capacity, and expand agriculture massively. Provide emergency pandemic food relief and a future with “daily bread” for all.