A Hamiltonian Credit System for Development

We will generate the investment credit necessary to carry out the job creation program outlined in this proposal through the American System of economy, rather than continuing with the suicidal policy of trying to bail out a $1.8 quadrillion speculative bubble with endlessly increasing quantitative easing and other bankers’ bailouts at taxpayers’ expense.

The American System was founded on the knowledge that human invention and creative ideas are the source of wealth; they represent the human capacity to understand the laws of the physical universe and to act on them, more powerfully with every new discovery of those laws. The American System of economy appeared as early as the 17th Century Puritan colonists of the Massachusetts Bay republic. It directly opposed the British free trade system which destroys us today, which teaches that wealth comes from advantage in trade (buy cheap, sell dear) and financial speculation; the Physiocratic system, which peddles the superstition that wealth is simply ownership of land; and the socialist idea that wealth comes simply from physical labor.

No, said the brilliant first American Treasury Secretary Alexander Hamilton: Wealth is the product of human invention which has been provided with credit to become new machinery, a new form of power or chemical process, a new tool. Hamilton’s idea that the purpose of banks is to “put the savings of the nation in the hands of those able to use it most productively,” created commercial banking in America. His creation of national banking enabled a bank, acting between the government and private banks, to leverage the savings of the nation for years into the future, as national credit for manufactures and infrastructure. Hamilton’s Report to Congress on Manufactures was the first appearance in America of the full intention that the United States would become a great manufacturing nation, not a playground where European financial speculators prey upon impoverished American farmers.

British monetarism inculcates the idea in the credulous that money has a value in itself. The modus operandi is to corral the power to create money in central banks, controlled by private banks and private financial concentrations, which can use that power to indebt not only entire industries, but governments as well. And when private debt speculations collapse, print large volumes of money to paper over the losses, and thereby further indebt the population. When a large speculative bubble collapses, the central bankers’ job, in a British monetarist system, is to inflate the next, larger speculative bubble. They’ve been doing it for centuries wherever they’re allowed to. 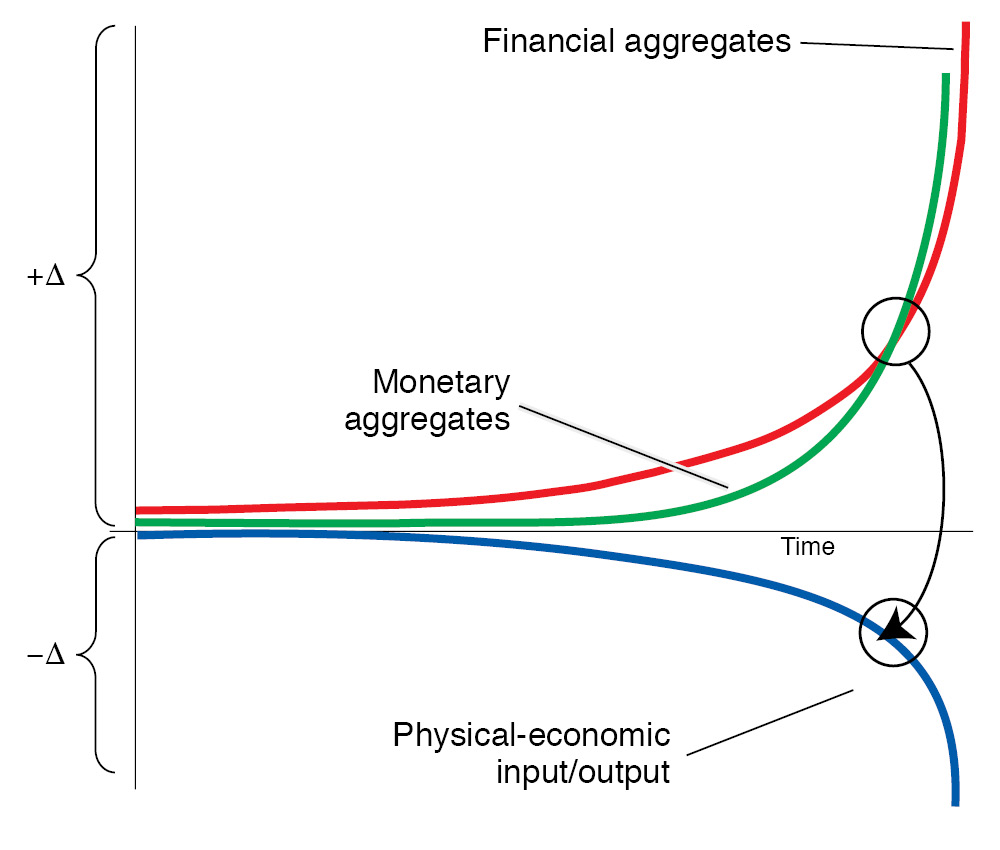 The late Lyndon LaRouche identified the characteristic of this system with his “Triple Curve: A Typical Collapse Function” (see Figure 1). Physical economic production is suppressed in this process, and declines in real terms, while the volume of debt and other financial aggregates increases at an increasing rate; and money (“monetary aggregates”) is printed (electronically or otherwise) at an accelerating rate to pay at least part of debts which are tending to collapse. When these curves become hyperbolic, and particularly when money printing starts to accelerate its rise even faster than debt (“financial aggregates”), while the physical economy plummets, the financial system crashes.

We are going to reverse that disastrous pattern.

The recovery from this deep, global crisis requires the United States to return to the policies of Alexander Hamilton, which made America the world’s leading industrial nation. Hamilton’s policies were employed over 150 years during great crises, not just by Presidents George Washington and John Quincy Adams, but also by Presidents Abraham Lincoln and Franklin Delano Roosevelt, each time lifting higher the American economy—and, in FDR’s case, the economies of several other nations as well.

The great economist Lyndon LaRouche applied the American System to industrial and agricultural development of the planet, for more than 60 years until his death in 2019. In a 2014 work he specified it in four fundamental policies: 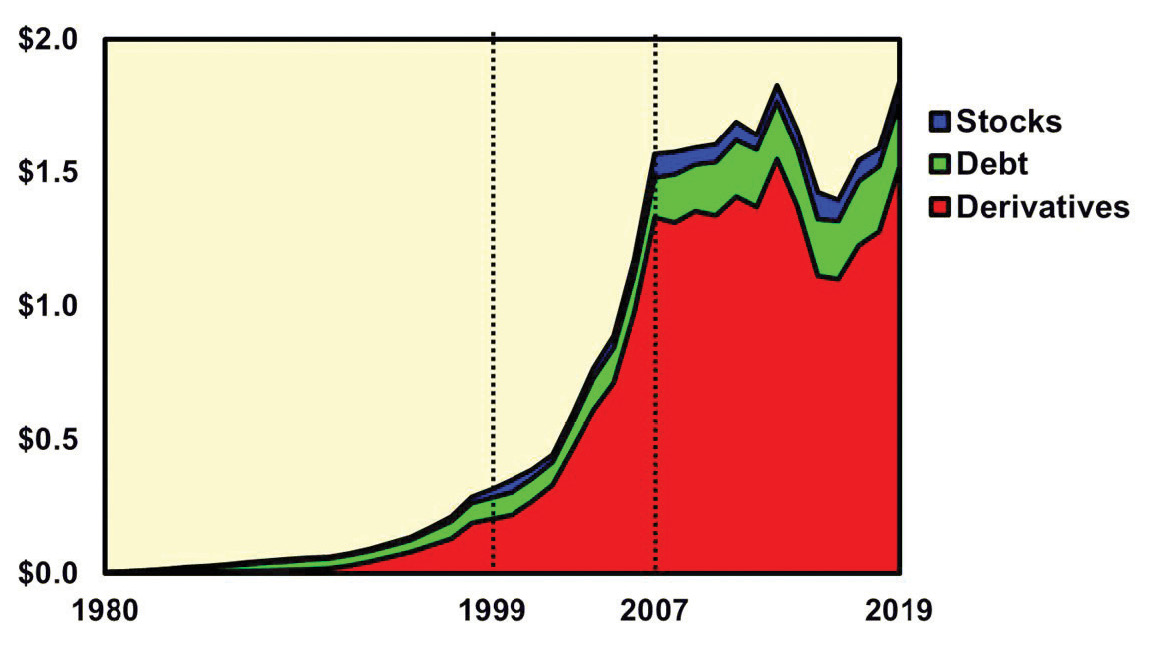 1. Restore the Glass-Steagall Act to break up the immense “universal banks” in the orbit of the City of London and Wall Street, and put the entire speculative bubble—today exceeding $1.8 quadrillion—through bankruptcy reorganization (see Figure 2, World Financial Aggregates).

2. Establish Hamiltonian national banking to provide credit for recovery, for example, by nationalizing the Federal Reserve and taking it out of the hands of the private financial predators who run it today.

3. Direct credit to develop new-technology economic infrastructure and technologies that increase the energy- and power-density of production, working closely with other sovereign nations on such global infrastructure projects.

4. And finally, launch “science drivers,” including scientific crash programs for advanced fission and fusion power, and exploring the Moon, Mars, and the Solar System.

Then the purposes for which the Fed now prints and issues currency—bailing out financial markets and the biggest banks, acquiring vast hoards of financial assets to prop up their value—will be ended by the new direction of the nationalized bank. Corporations can be set up within the Federal Reserve, not to continue speculation, which must simply be wiped out, but to provide credit to infrastructure, in particular health infrastructure.

The nationalized Federal Reserve, or new Hamiltonian National Bank, will act as the credit channel for new economic infrastructure built nationally, including by buying the infrastructure bonds of states and municipalities.

And whereas the Federal Reserve is now providing nearly half a trillion dollars in loans (“swaps”) to foreign central banks, the new bank will instead provide credit for the export of capital goods—especially for the building of hospitals and public health infrastructure in developing countries. It will do this in joint credit operations with the development banks of China, Russia, Japan, India—this will be a new international credit system as President Franklin Roosevelt intended the Bretton Woods system to be after World War II. And the nationalized Federal Reserve can also provide capital to the United States Export-Import Bank and other agencies that are supposed to help build health, energy, and agriculture infrastructure abroad.

In the United States, we will develop the “science drivers” to accelerate the inventions and breakthroughs in technology and lift the economy to a new level while reindustrializing it. This means doubling NASA’s budget immediately for the mission to return to and develop the Moon in order to go on to Mars. We will finally bring the laser-machine-tool revolution into our industry. Within a few years we will be producing advanced nuclear reactors, inherently safe and made in small modules to site throughout North America and abroad, and using them also for desalination against drought. We will electrify the railroads and make them high-speed—soon magnetic levitation—rail corridors.

The big banks won’t like losing the Federal Reserve that has always backstopped Wall Street speculation. But we will have to break up those banks by reinstating the Glass-Steagall Act to put them through bankruptcy reorganization. We will need “clean” commercial banks that are not in the business of speculating and broker-dealing with depositors’ funds, but rather, commercial banks that can work with the nationalized Federal Reserve to provide the loans to designers, builders, inventors, and staffers of this new infrastructure for human life.

These actions—domestic scientific and technological development, and international cooperation in building new world public health infrastructure and a “world land-bridge” including high-speed rail—are the means to create many millions of new, productive jobs, 50 million such jobs over a decade. They will transform the knowledge, skills, and occupations of the American workforce in the direction of rising productivity, improved standard of living, and increasing power over nature.