This article appears in the June 5, 2020 issue of Executive Intelligence Review.

The Endeavour—To Inspire and Unify Nations!

NASA/Bill Ingalls
The SpaceX Falcon 9 rocket lifting off from the Kennedy Space Center, carrying the two U.S. astronauts aboard the Endeavour capsule, which later docked at the International Space Station.

June 1—On May 30, 2020, America, once again, has done something astonishingly great! We have reignited the dream of space! American Astronauts have launched again from American soil, after having been grounded for the last nine years. NASA Astronauts Col. Douglas Hurley and Col. Robert Behnken launched aboard the SpaceX Falcon 9 commercial rocket and Crew Dragon Spacecraft, on a 19-hour mission to the International Space Station from the Kennedy Space Center’s Cape Canaveral launch pad 39A. This was a truly inspiring achievement, not only for every American, but for every human being on the planet.

During a briefing after the Astronauts had successfully docked with the International Space Station, NASA Administrator Jim Bridenstine was asked to explain how Americans could be expected to have any excitement about a space launch at a time of civil unrest across the nation, and of the other challenges the nation was undergoing. Reflecting on the unrest in the nation—the events unfolding in the aftermath of the brutal murder of George Floyd by a Minneapolis Police officer—and the coronavirus pandemic raging around the globe, Bridenstine said, “We’ve been through tough times before and in tough times America has the ability of accomplishing astonishingly great achievements.”

As SpaceX founder Elon Musk enthusiastically exclaimed during the launch events, “We want to inspire kids to say that one day they want to wear that space suit, and get them fired up to say, ‘I want to be an astronaut. I want to work on aerospace engineering. I want to advance space flight.’ ” Musk spoke about the achievements of the launch being about “reigniting the dream of space.” This is exactly what is required to inspire the youth of our nation, and young people throughout the world. We are reigniting the dream of space, from a dream that has for too long been deferred, through decades of attacks on our space program, by corrupt political leaders, budget cuts, and geopolitics.

Prior to their monumental launch, Bob Behnken and Doug Hurley were given the honor of naming the space capsule they were to fly, as has been a tradition going all the way back to the Mercury spacecraft. Col. Hurley announced to everyone, “We would like to welcome you aboard capsule Endeavour!” He explained the choice of the name Endeavour,” in honor of the “incredible endeavor NASA, SpaceX, and the United States has been on since the end of the Space Shuttle program back in 2011.” He added that the name had personal meaning for both of them, in that they both had their first flights on Shuttle Endeavour. In July 2011, Col. Hurley had flown aboard the last shuttle mission to launch from Pad 39A, after the Shuttle program had come under attack under the George W. Bush Administration.

The Space Shuttle program was permanently ended during the reign of President Obama, delivering another great blow to the optimism of our nation—the optimism which has been increasingly under attack since the Apollo Moon mission.

America is now making a great comeback in its human spaceflight program. Now, with great pride, Col. Hurley and Col. Behnken have been assigned the proud honor of launching America to the International Space Station from American soil once again, paving the way for even greater missions to come. For the first time in nearly a decade, after 19 hours of orbiting the Earth, and testing the new spacecraft’s control and life support systems, the astronauts, launched from America, docked with the International space station at 9:30 a.m. Central Time, on Sunday morning, May 31. How exciting it will be to see Astronaut Behnken visit the beautiful seven-window Cupola that so many other astronauts and cosmonauts have enjoyed, since he launched the structure on his STS-130 mission in 2010. 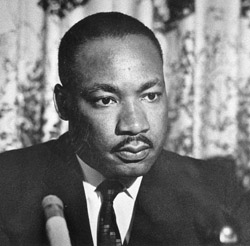 A Dream Not To Be Deferred

What made this moment and this weekend’s successful mission possible? Determination and leadership, despite all obstacles. After nearly a decade of stagnation in the American human spaceflight program—when the launch pads of Cape Canaveral had seen little action, and had become overgrown with high grasses for years—President Donald Trump, in the early days of his Presidency, vowed to restore America’s leadership in space.

In December 2017, President Trump signed Space Policy Directive 1. During the signing ceremony the President declared, “The directive I’m signing today will refocus America’s space program on human exploration and discovery. It marks an important step to returning American astronauts to the Moon for the first time since 1972 for long-term exploration and use.” He then rekindled the commitment to the pioneering spirit that has always defined America, declaring, “Today, the same spirit beckons us to begin new journeys of exploration and discovery, to lift our eyes all the way up to the heavens, and once again imagine the possibilities waiting in those big beautiful stars if we dare to dream big.”

In 2019, the name Artemis was given to the program that will return American astronauts to the Moon, taking up the first woman and the next man, in 2024, to build toward a permanent presence there and a base of support for launching humans to Mars.

The successful launch of the two astronauts from Cape Canaveral’s Pad 39 to the International Space Station was a stepping stone toward achieving that higher goal. We have learned that neither NASA alone, nor America alone, will get us there. It will be done with the support of commercial and international partners. America received congratulations for the launch from nations around the world.

NASA Astronaut Nicole Mann relayed a conversation she had with her eight-year-old son prior to a pre-launch press briefing, in which he asked her if the flight that was about to be launched by Bob and Doug was our first flight back to the Moon, and she replied to him, “not technically, but it is the first big step on our roadmap to the Moon for the Artemis mission and eventually to Mars.”

The Artemis program has brought forth a new vision, rekindling the pioneering spirit of space exploration, which has the power to unify not only the people of our nation through astonishingly great achievement, but to inspire and unify nations throughout the world through shared discoveries and cooperative efforts.

Just as Dr. Martin Luther King had a dream, this too is a dream that can no longer be deferred. The inalienable rights of life, liberty, and the pursuit of happiness are not just expressions in our Declaration of Independence. They are God-given rights, written into the natural laws of the Universe. They are the rights of every man, woman and child throughout the planet, to participate in that which is truly human, to advance the creativity of every human being, to overcome every challenge and every obstacle, and to look to the stars for the solutions to overcome that which has made us to behave too often as victims or underlings.