This article appears in the June 12, 2020 issue of Executive Intelligence Review.

PRINCIPLE OF POWER IN WORLD POLITICS 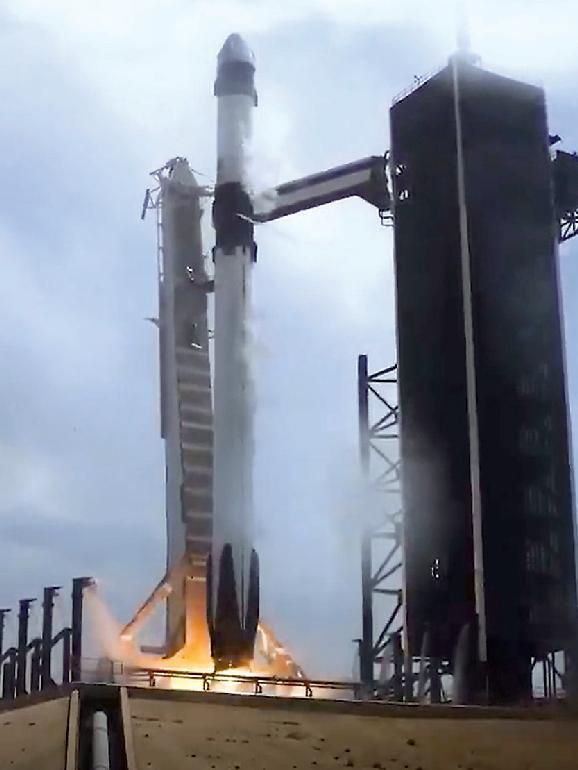 NASA
SpaceX Crew Dragon/Endeavour is launched to the International Space Station, May 30, 2020.

June 8—When, in the year 2100, 80 years from now, the continent of Africa has a population of 4.3 billion, as is presently projected, the thousands of astronauts and space travelers, who were born there, will remember the year 2020 as the year when President Cyril Ramaphosa of South Africa said:

In the midst of our struggle against COVID-19, Elon Musk has made us proud as a country and continent. The Dragon’s successful flight to the International Space Station speaks of the ability of a resilient, industrious, fearless, and visionary individual to harness talent and material resources to open new frontiers of hope, adventure, and opportunity for generations into the future. It is most appropriate that we have been given this hope and excitement at a time when insecurity and uncertainty define the human condition in many parts of the world.

The 2020 limitations of Musk, Ramaphosa, the nation of South Africa, or the United States notwithstanding, those four billion-plus inhabitants of Africa in 2100, and those inhabitants of the Moon and travelers to space lucky enough to hail from that continent, will not think of the early twenty-first century’s faults, except to rejoice that apartheid and other divisions of a human race, which had been arbitrarily classified by various color codes and exotic ethnic brandings, have been finally, after centuries, dissolved, like a virus exposed to ultraviolet light. Humanity’s center of culture will not only have shifted to Africa, but to the Mountains of the Moon—not those of East Africa, but of the Moon itself, and beyond.

However, soon, in 2020, if there is no international intervention to the contrary, some 300,000 people per day will be dying of famine worldwide. A second wave of coronavirus infections looms on the horizon, even as the first wave continues to accelerate and claim more dead in Brazil and other nations of the world. Worldwide indebtedness and mass unemployment continue to explode and will threaten tens of millions more. For the projected “new world of Africa 2100” to come to a prosperous fruition will require an unexpected, though not unprecedented, sudden reversal of course, which the citizens of the United States must bring about now, through the Office of the Presidency. 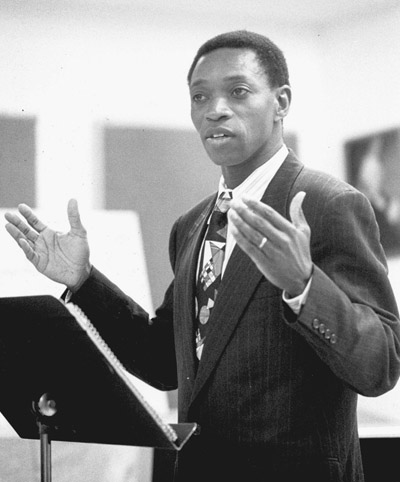 Jacques Bacamurwanko, former ambassador of the nation of Burundi to the United States, in responding to the recent killing of George Floyd in Minneapolis, said:

I’d love to mention that the protest activists, who went to the streets following George Floyd’s heinous killing by the Minnesota police officer, need to be told that it’s the same anti-America system that was responsible for the strangulation of Lyndon LaRouche, Jr. LaRouche’s voice was literally choked off by the same white supremacist gang, which did not want him to exercise his right to vote, to move around, or to travel abroad freely.

The good news is the murderous gang did not manage to stop the flow of LaRouche’s freedom and ideas far and wide. The world would be freer today if Mr. Trump could cause an historic Presidential Order to be signed in the Oval Office, urging the anti-America gangsters to get their knee off Lyndon LaRouche’s neck. That’s what our insistent plea and global advocacy to exonerate LaRouche actually means.

If LaRouche were exonerated mankind would usher in a beautiful era of sustainable dialogue for peace, civil rights, and socio-economic development.

Though it may appear different to the majority of Americans at the moment, the injustice that they see now, is the result of a long arc of injustice tolerated at the highest level of government, particularly since November 22, 1963, and not merely against those unable to, or prevented from, defending themselves.

When viewed from the mountaintop of universal history visited by Martin Luther King, Abraham Lincoln, Frederick Douglass, Franklin Roosevelt, President John Kennedy and his brother Robert Kennedy, and a few others, it becomes clear that to change the systemic injustice that lies at the root of the real problem—not only of racism, but of a genocide intent on the removal of billions of people from the planet in the next years ahead, through, for example, the “benevolent fascism” of the “Green New Deal”—we must answer the question: What makes each human life sacred, and therefore necessary?

In this issue of EIR, Lyndon LaRouche’s “Education for Freedom: Shrunken Heads In America Today,” presents this matter, and in such a way that his method of thinking, as so documented, demonstrates that he could never have been guilty of the crimes of which he was charged by the same corrupt Department of Justice, which carried out Russiagate against President Trump, the “Operation Fruehmenschen” persecution of African-American elected officials in the 1980s and 1990s, the COINTELPRO (the FBI Counter-Intelligence Program) in the 1960s and 70s, and many other crimes. LaRouche did, however, commit the crime of Frederick Douglass—the unpardonable crime of demanding that no one continue to be a slave, but rather that each individual must see it as their duty, no matter what their circumstances, to take responsibility, not only for his or her own freedom, but that of the nation as well.

The British imperial forces that have dominated humanity since 1763, not stopping after the Second World War, will not tolerate the existence of thousands of African astronauts, or 4.3 billion literate persons on the African continent, in 2100. The unwillingness to confront this real enemy disqualifies all those who seek to put an end to what they call “systemic racism” from even understanding the nature of the problem. Like those who insist on talking about a mysterious “deep state,” they won’t name the names of the real enemy: the City of London, and its subsidiary, Wall Street.

The past half century’s attempts to eliminate the widespread, even endemic racism in the United States, and in many other parts of the world, have not worked. This could in part be because the self-appointed park rangers in charge of the human zoo maintained by the never-dismantled British Empire, as the enforcers of the “races” hoax, are never even named, much less denounced. For example, take Labour Party member of the House of Lords, socialist and “liberal humanitarian and philosopher,” Bertrand Russell, who, in 1923, wrote:

The white populations of the world will soon cease to increase. The Asiatic races will be longer, and the negroes still longer, before their birth rate falls sufficiently to make their number stable without the help of war and pestilence.... Until that happens, the benefits aimed at by socialism can only be partially realized, and the less prolific races will have to defend themselves against the more prolific by methods which are disgusting even if they are necessary.

Now look at the uncomfortable reality of Barack Obama’s “Sir George Bush” Presidency. Apart from the early management of his Presidential candidacy by Robert Wolf of UBS—the same Union Bank of Switzerland that worked with the Bank of England’s Montague Norman and Prescott Bush, father of “Bush 41” and grandfather of “Bush 43,” to put Adolph Hitler into power—Obama’s obeisance to the British Crown from his visit to Buckingham Palace on April Fool’s Day of 2009 was an indication of what was to come.

There was Obama’s British-inspired Tiergarten-4 health care bill, and his later admonition to students from across Africa gathered in Soweto that they should avoid a desire for air conditioning and automobiles because that could make the planet boil over. But it was when Barack Obama shut down the American manned space program, remarking that “we’ve been to the Moon before,” that his inability or unwillingness to bother to understand his impending commission of a crime against the future of the very human race itself, that his immediate impeachment was demanded, on the grounds of his fundamental violation of the General Welfare Clause of the Constitution—not only that of the United States, but that of any other sovereign nation on the planet that also believes in that notion.

Obama’s much discussed failure to better, in any significant way, the lives of African-Americans during his time in office, flows not from any specific sin of omission he chose to commit in that regard, but from the systemic outlook he brought to the office—that of a trained civil servant of the British Crown, fully committed to the Malthusian policies that are the softly spoken reality of London’s Green Finance Institute and the “Green New Deal.” Therefore, Obama opposed the technological optimism and prospects for increased human population implied in the implications of the American manned space program.

America’s return to space through the recent SpaceX mission, is part of the Trump Administration commitment, called the Artemis program, to return human life to the Moon by as early as 2024.

Consider: does that mission—including its implied prospect of mining helium-3 on the Moon’s surface, an isotope of helium that can act as the otherwise largely unavailable fuel for thermonuclear reactors, creating the cleanest and most energy-dense form of power available for humanity today—hold fundamental promise for all of humanity, shifting the entire platform of living standards for the entire planet?

Consider: can that provide a real solution—especially if viewed from a proposed 15-year crash development of fifth-generation nuclear, and first- and second-generation thermonuclear power—to the systemic impoverishment of nations and regions throughout the world, including the United States?

Consider: does that mission provide a means of cooperation for China, Russia, and other spacefaring nations to move beyond the threat, and the expenditure of war? Which Administration, therefore, will, if LaRouche’s economic policy, as in his Four Laws, were adopted, do more to improve the physical reality of communities, including African-American communities, despite whatever feelings one would choose to have about the present occupant of the White House?

If the president of the African National Congress, Ramaphosa, can clearly perceive the implications for all of humanity of the return to space by the United States, a country that once described his party as a terrorist organization, as the Rev. James Bevel used to say, “What exactly is your problem?”

The American people, no matter how tempted by real injustice to descend into the maelstrom of despair, must not allow themselves to be “had,” to be “took,” to be “bamboozled.” Thinking about Ambassador Bacamurwanko’s proposal, on the exoneration of Lyndon LaRouche, and daring to think from the top down about recent days’ events, can provide the solution-concept for the immediate crisis of understanding of the American Constitution and the American Presidency, which must needs be solved if we are to assemble the United States, China, Russia, India and other nations in an effort to save humanity in time.