This article appears in the June 12, 2020 issue of Executive Intelligence Review.

Farmers to Green Financiers: ‘You Neither Sow Nor Reap, Yet You Know Everything’ 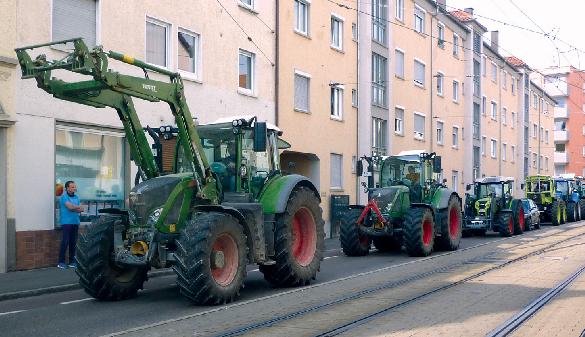 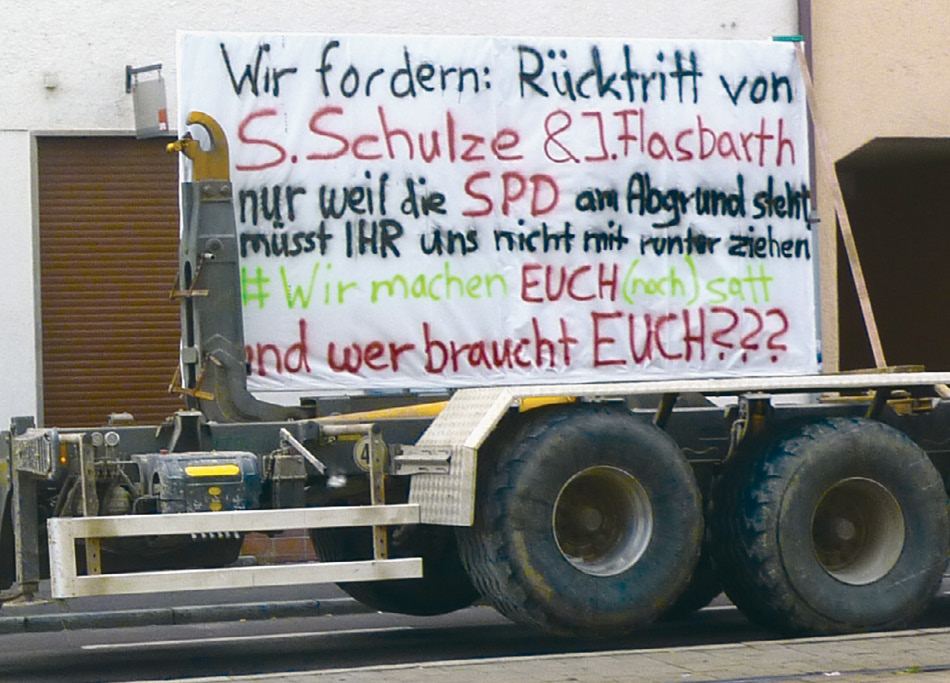 EIRNS/Werner Zuse
Their tractors lining the street at the local SPD federal parliament member’s office in Ulm, Germany, on May 28, 2020, farmers demanded the resignation of the Environment Minister and the President of the German Environment Agency. “Just because the SPD is at the brink, do YOU have to pull us down with you? We’re (still) feeding YOU. And who needs YOU???”

June 6—The release of the European Commission’s green Recovery Fund plan on May 26—with the radical ecologist “Farm to Fork” (F2F) plan, and the release of the Nature Report by German Environment Minister Svenja Schulze May 27, triggered a new wave of farmer protest actions in Germany, with tractor convoys and blockades in multiple cities on May 28. It continues the repeated mass protests and tractorcades by farmers in many European countries last fall, with a break only during the peak COVID-19 period. A common banner stated, Sind die Bauern ruiniert, wird das Essen importiert (If the farmers are ruined, food will be imported). Another frequent message was aimed at the green financial crowd: “You Neither Sow Nor Reap, Yet You Know Everything.”

Farmers are caught in an existential crisis, given that the new green financial dictates come on top of pre-existing low prices, and disruptions caused by the COVID-19 pandemic hitting the cartelized food processing and distribution system. In the very concentrated meatpacking, specialty-crop handling and other situations, workers are suffering from the virus, food goes to waste, meat animals can’t be slaughtered, and so on. Bavarian farm leader Bernhard Perschl, a hog producer, reported on this at the Schiller Institute webinar on June 6, “New Start for the World Economy under Conditions of the Coronavirus Pandemic.” Perschl has conferred with farm, fisheries, and other food sector leaders in the Americas—in Argentina and across the U.S. including Alaska, through international conference calls sponsored by the Schiller Institute.

The crisis situation in Germany, in one of the world’s most advanced agricultural regions—as in other parts of Europe, the United States and the world—underscores the need for worldwide contingency measures as part of a new economic system, to reverse the rapidly growing hunger pandemic and threat of mass starvation. Farmers worldwide have been systematically squeezed out of business and into off-farm jobs, which now aren’t there.

World Food Program Chief Economist Arif Hussain warned in Time magazine May 26, that the number of people facing acute hunger in 2020 could rise to 265 million, double that of 2019, and that “we need to treat the agriculture sector as an essential sector like health care.” He referred to supporting planting, harvesting and other basic farm functions. This means a proper pricing structure to cover these and all costs of production. 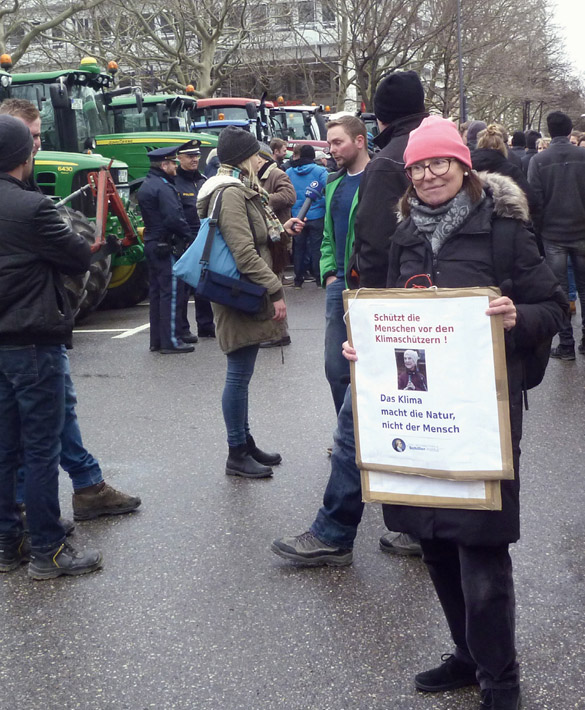 EIRNS/Werner Zuse
Christa Kaiser of the Schiller Institute at a Land schafft Verbindung demonstration outside the Bavarian State Ministry of the Environment in Munich, Germany, March 5, 2020. Her sign reads: “Protect people from the climate protectors! Nature, not Man, makes the climate.”

The May 28 tractorcade actions were organized via social media, by the farmers’ initiative called Land schafft Verbindung (Countryside Creates Connections), with public backing of the top officers of the German Farmers’ Union (DVB). In Bonn on May 28, at the head office of the Federal Ministry of Environment, Conservation and Nuclear Safety, about 250 tractors of North Rhine Westphalian (NRW) farmers rolled in, to protest with banners like, “It’s enough, Mrs. Schulze!” They targetted her farmer bashing—in German, Bauernbashing. Representatives of the farmers, who are part of Land schafft Verbindung, also met with officials of the Environment Ministry to voice their anger at the repeated slanderous attacks on agriculture as the alleged main source of bad emissions.

In Berlin on May 26, Environment Minister Schulze had been forced to address the 4,000 farmers rallying at the Brandenburg Gate, their parked tractors festooned with signs creating a panorama in the background. Her short address consisted of defensive, empty words, in which she claimed she sympathizes with farmers, but that she is doing what she has to do for the insects and the groundwater. Her speech was interrupted by a few air-horn blasts, and met at the end by a long, stone-cold silence.

The details that have so far been made public about the radical-ecologist inspired “Farm to Fork” (F2F) strategy, for which the European Commission wants to spend €100 billion by 2027, are terrible. The stated goal is to achieve a largely “emission-neutral” agricultural sector in Europe by 2030, which is part of the Commission’s Green Deal. It is pitched to the European public as an ostensible “recovery” from the pandemic. The F2F package will be voted on at the June 18 summit of the EU.

F2F states it will back new, green business models, which are promoted as involving all actors of the food chain, in achieving its so-called sustainability. For instance, it supports a more “circular” interconnection of food processing and retail, as well as so-called “socially responsible” production methods. The “circular” approach, also planned for other sectors of the European economy, aims at prioritizing modes of food processing based on re-using materials (e.g., in packaging), over producing new materials. Again, the use of fertilizers and pesticides is to be drastically reduced.

Tractors in Many Cities

In many instances, state or Federal officials were compelled to come out and speak to the farmers at their mass rallies. Farmers called for the immediate replacement of Minister Schulze and other leading ministry officials because they are not acceptable for a democratic society with their stone-headed bias against agriculture.

The President of the German Farmers’ Union, Joachim Rukwied, said in a press release issued at the time of the demonstrations, “Agriculture in Germany needs support, and a perspective for the future without overregulation and prohibitive policies. We desire a dialogue and we require concrete, practical results.” 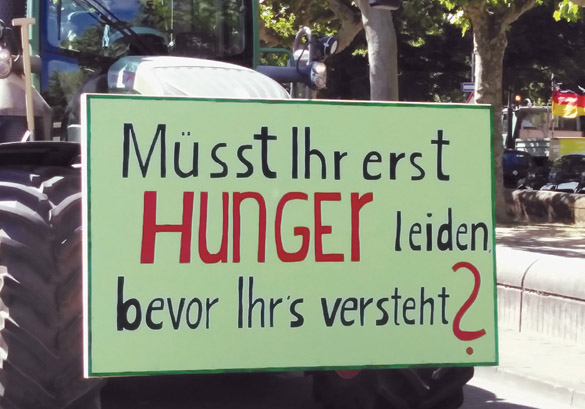 EIRNS/Barbara Spahn
A farmers’ protest action in Mainz, Germany, May 28, 2020. The sign reads: “Must you suffer hunger before you understand it?”

The large placards—displayed on thousands of tractors dominating the roads and streets—carried many hand-drawn messages, reflecting the heartfelt, serious mission the German farm families have taken on. A few examples:

“Do you really have to go hungry, before you can understand?”

“Who actually feeds you?”

“Ideology does not satisfy the stomach.”

“Without us your plate is empty” (followed by a diagram of a sandwich with each part labelled: grain, pork, cheese, beef, vegetables.

And a sign with a drawing of the face of a smiling cow: “Power to the Bauer [farmers]!—Rural Youth of Lendigshausen.”