John Bolton Exposes Himself and the Coup If you want the short version, rather than the 578-page Bolton daily diary of notes congratulating himself for his superior intelligence when compared to the person he considers a vulgar oaf occupying the White House, then watch the ad campaign now being mounted by the Lincoln Project nightly on Fox. Bolton and the Lincoln Project are kin: both are products of the Bush-associated Republican elites that Donald Trump defeated in 2016. They are now out to defeat him in 2020, using the politicized COVID epidemic, race war, fake polls, and outright censorship to sow pessimism and atomize the President’s base, while continuing their efforts to destabilize the presidency itself.

In chapter after chapter of Bolton’s book, he inadvertently reveals the true source of “turmoil” in the White House. The representatives of the Republican, Democratic, and military elite, from which any U.S. president picks a government, conspire endlessly against a President who has acted to end the financial and imperial regime put into place following the fall of the Berlin Wall in 1989. That regime depends financially on the endless wars which Donald Trump was elected to end.

Barack Obama, Nancy Pelosi, and Joe Biden are on the other side of this. They conspired, throughout 2016, to tar Trump and Russia in a totally fake conspiracy. They now rail at Trump’s avoidance of the latest fake intelligence dump, the claim that Russia paid the Taliban to target American soldiers. They say Trump’s inaction amounts to treason. The intelligence dump is intended to keep American troops in Afghanistan protecting the world’s opium supply chain, while Trump seeks a total U.S. withdrawal.

Time after time, in Bolton’s book, Trump, like the Road Runner, aborts their plans for war, reminding them after endless arguments, that he has “heard from his base” and “they don’t want this.” Unable to fathom that Trump actually has a base that elected him President, and to whom he answers, Bolton envisions his main opposition, in addition to Trump himself, to consist of Tucker Carlson and Senator Rand Paul. He rails against both repeatedly. Typical is Bolton’s account of the massive scheme—involving generals in the Pentagon, Mike Pompeo at State, Gina Haspel at CIA, pro-war Senators and Congressmen, Republican funders, and Fox News—ginning up for a military attack on Iran in retaliation for the June 20, 2019 shoot-down of an unmanned American Global Hawk drone. Among the people Bolton names in the book as those willing to keep this scheme on track were General Jack Keane, Senator Lindsay Graham, and Senator Tom Cotton.

But John Eisenberg, a lawyer in the White House Counsel’s Office, at the very last minute, informed the President that the Iran strike would kill 100-150 Iranians. It was hardly reciprocal: 150 humans vs. an unmanned drone. All of the schemers, it turns out, had assiduously avoided presenting the President of the United States with potential human casualty figures. Bolton declares that Trump’s calling off the strike was the “most irrational thing” he had ever witnessed a President do, while decrying the “chaotic” process that allowed a lowly White House lawyer to prevent a potential war. 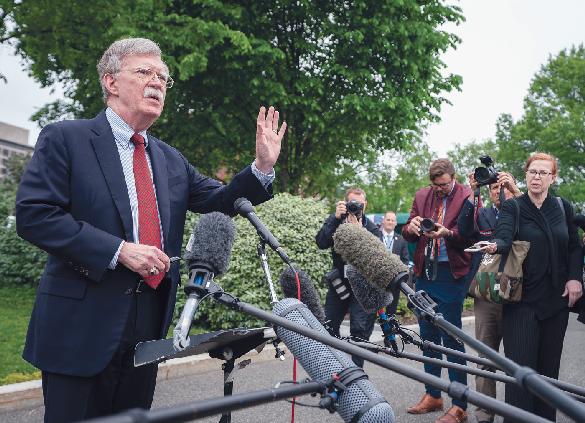 White House/Tia Dufour
John Bolton, speaking with reporters outside the White House, May 1, 2019.

Who Is John Bolton?

In describing the present British Empire, Lyndon LaRouche likened it to a “slime mold”:

And a slime mold goes through a phase where it seems to be a uniform slime, and then at another point, it takes the form of individualities standing up in the middle of the slime, as individualities.... So you have a system throughout the world now, which is centered nominally in Anglo-Dutch liberalism, the Dutch and the British financial system. Nominally, it’s under the King or Queen of England, but in point of fact, it controls the King and Queen of England, or whatever. What it is, it’s a concert of private banking interests like a slime mold, which, in concert—while they’re cutting each other’s throats in competition, and so forth—work to try to impose their system on the world....

While Bolton attempts to dress up his beliefs as a synthesis of “Edmond Burke, Dean Acheson, and John Foster Dulles, and the Federalist papers,” which is bad enough, he explicitly states that his guiding principle is that “homo sapiens are hardwired for violent conflict.” In other words, Bolton says that men and women are beasts, acting in a slime-mold war of each against all, precisely the evil view described by LaRouche. Small wonder then, that President Trump would attempt to rewire this monster in one of the book’s more humorous and telling episodes, by persistently asking Bolton why he is so hostile. White House/Eric Draper
Bolton’s true pedigree is that of a hired thug for the Republican Party of George H.W. Bush and Dick Cheney, who is pictured here with George W. Bush. There are two telling points in Bolton’s book that underline his true pedigree as a hired thug for the Republican Party built by George H.W. Bush and Dick Cheney. The first is his reference to Bush lawyer James Baker III as a kind of sherpa throughout his career. The second is that Bolton nowhere references the ongoing coup against the president as a factor shaping policy. In fact, he as much as admits that he is a part of that coup. Commenting on the selection of Michael Flynn rather than himself as National Security Adviser, Bolton tells us that Henry A. Kissinger had assured him that Flynn would be out within a year.

Bolton’s financial disclosures, filed when he became National Security Adviser in April of 2018, reveal the same thing. First, Bolton’s wife Gretchen, is a financial adviser for AXA, the two-century old French global insurance firm, which ranked 11th in the world in terms of assets as of 2019—a bona fide leading member of the slime mold. John Bolton was, at the time of filing, a paid adviser to the Rhone Group, the New York private equity firm operated by Robert Agnostinelli and Steven Langman. It is the corporate affiliation most highlighted by Bolton in his book.

Both Agnostinelli and Langman are veterans of the synarchist investment house Lazard Freres, under the tutelage of Felix Rohatyn. Lazard’s Paris branch and its Banque Worms played a major role in installing Europe’s pre-World War II fascist governments. Agnostinelli is, by his account, a close friend of former French president Nicolas Sarkozy, George W. Bush, Jeb Bush, and former Spanish Prime Minister José María Aznar. He is, also by his account, fanatically pro-Israel and fanatically pro-British Empire and British colonialism, just like Bolton.

Bolton is also a senior fellow of the American Enterprise Institute (AEI), where he has lived when out of government for years. AEI is considered to be the most prominent Republican Party think tank presently, and during the Bush Administration was the center of advocacy of the Iraq War and regime-change throughout the Middle East and the world. It is funded by the Koch Brothers and related conservative donors, billionaire Wall Street operators like Bruce Kovner, and a plethora of intelligence community-related foundations including the Bradley, Smith-Richardson, and Scaife foundations.

In the run-up to the Iraq War, AEI rented space to the Project for a New American Century (PNAC), the propaganda front for the war. Bolton was a director of PNAC. AEI has included Paul Wolfowitz, Richard Perle, John Yoo, and Dick Cheney himself among its scholars, advisers, and board members. Bolton’s service in the George W. Bush State Department was rammed through by Dick Cheney personally, and it was Bolton, according to Congressman Henry Waxman, who inserted the false British intelligence claim that Iraq had imported yellow cake uranium from Niger, into President Bush’s 2003 State of the Union speech. Bolton is also chairman of the Gatestone Institute, famously anti-Muslim, anti-Iran, and pro-Israel, funded by Sears heir and Manhattan socialite Nina Rosenwald. In 2014, Bolton founded a Super PAC aimed at securing his position as Secretary of State in the next Republican Administration, then presumed to be that of Jeb Bush. His political action committee (PAC) contributed to key Congressional and Senate races in the 2014 Midterms. The main funder of Bolton’s PAC from inception was Robert Mercer, the London and New York hedge fund king, who was also funding Breitbart News under Steve Bannon. Bolton’s PAC contracted with Cambridge Analytica, the British military voter data and profiling firm, which had been bought by Bannon and the Mercers, introducing Cambridge and its voter profiling operations into the American political environment.

Cambridge, the Mercers, Bannon, and Kellyanne Conway initially supported, in 2016, the British Tory favorite, Ted Cruz, for President. It now seems clear that this entire operation was aimed at profiling and containing the revolt of working- and middle-class Americans which expressed itself in Trump’s surprise 2016 election. Pessimism, identity politics, and such psychological warfare pacification operations as Q have been used to distract, divide, and atomize the Trump base. The operation is similar to the profiling and destruction of the Tea Party movement.

When Trump won the election, the Mercers and Bannon campaigned relentlessly to make Bolton Secretary of State. That operation failed when Trump selected Rex Tillerson on the recommendation of former CIA and Defense Chief Robert Gates. Bolton’s inside man, Bannon, was fired after collaborating with the trash-for-cash author Michael Wolff on the anti-Trump novella, Fire and Fury. Bannon, on his way out the door, showed his true colors, declaring the Trump Administration to be “a criminal enterprise,” just like Bolton has done since he was canned. Bannon is now struggling, nonetheless, to reinsert himself into Trump’s 2020 campaign and to turn the campaign toward an incessant “war with China” theme, rather than the optimistic and massive infrastructure and reindustrialization program which won Trump the election in 2016, and would, if realized, do so again.