This transcript appears in the July 3, 2020 issue of Executive Intelligence Review. 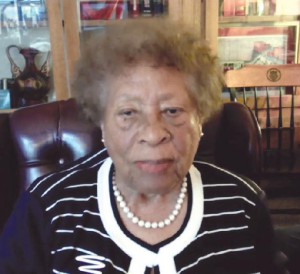 Dr. Elders served as the Surgeon General of the United States. This is the edited transcript of her presentation to the Schiller Institute International Conference, on June 27, 2020, “Will Humanity Prosper, or Perish? The Future Demands a Four-Power Summit Now,” on Panel 1: “Instead of Geopolitics: The Principles of Statecraft.”

I hope, as I am sure you all do, that humanity prospers. Ironically, a lethal disease, the coronavirus pandemic, may be the only way to unify the world, to reverse what might otherwise appear to be a sure slide into disaster.

We are here to discuss a new paradigm for the whole world—not just for the richer or more well-off nations. Helga Zepp-LaRouche has proposed that a world healthcare platform must be constructed to respond to the present crisis. She has circulated a short memo to this effect, calling for a Committee of the Coincidence of Opposites to be formed to implement it. I would like to respond to one passage of that memo in particular. Here is what it said.

A very large number of youth in the U.S. and the European nations, coming from the economically disadvantaged segments of society, are presently looking without a perspective into the future and are therefore exposed to an entire spectrum of perils. These young people could be educated through a training program in the tradition of Franklin D. Roosevelt’s CCC program to become medical auxiliary forces and could be deployed together with doctors and medical professionals in the building of first, temporary, and then permanent hospitals and hospital wards in African and other developing sector nations. For the countries of the Southern Hemisphere the support from the industrialized nations is existential.

Therefore it will be possible to find cooperating institutions, such as governments, religious and social organizations, as well as youth organizations, who can help to set up such facilities and win the trust in the population for such an approach. In the industrialized nations, for example, hospitals could set up partnerships with existing hospitals in the developing nations, which then could be used as affiliates for the construction of an expanded health program. One can also draw in nongovernmental organizations with experience in so-called conflict areas, such as the Peace Corps, catastrophe protection organizations, and various relief organizations.

In the U.S. and European nations retired doctors, helpful individuals, and social and religious organizations could work in a Committee to put together teams of medical personnel and apprentices for the deployments.

Now, I think that this can be done, but we must think about how we would do it. It will be especially important, for example, in the countryside of Africa, just as it is important in the cities of the United States, for people from the neighborhoods and communities to be involved in this process. Therefore, young people from Africa should be paired with young people from America and be trained together from the beginning. We should remember that there are significant communities of African-American youth in the United States whose parents came from Nigeria, Sudan, Ethiopia, Senegal, and many other nations.

Importantly, historically black colleges and universities could be used, as well as high school campuses in the urban centers, as central coordinating points, to assemble volunteers that want to participate in such a program. More broadly, various land-grant colleges, community colleges, churches, and other organizations already deeply involved in such outreach, need simply be encouraged by young people who want to assist in doing what perhaps only they can do—save the lives of their peers in Africa, the Americas, Asia, and elsewhere, through demonstrations of hope and health.

First, we will need many community healthcare workers. We can take a page out of what was done in the American Civil War in 1861 in New York City, with what was called the Sanitary Commission. We just take some people in the community, give them some basic health education, and develop them as medical assistants and medical technicians. Most importantly, they will be very well known in their communities. They can communicate very well with the people in their communities. You can have supervisors of these community healthcare workers, who are also trained, and of course coordinate with nurses, nurse practitioners, and doctors. But this gives you a far larger force to work with, which is what we need.

We can’t teach what we don’t know, and we can’t lead where we won’t go. We have to have tiers of people who are from the community, healthcare workers who understand the community and know the community, as well as immediate supervisors, up to people with enough medical training, all the way up to nurse’s assistants, practitioners, doctors, and others, right up to the level of super-specialist. We often do too much special care, and not enough public health. We are not doing enough basic public health. Public health, done this way, would do far more to maintain the health, more than 100 surgeons.

This is not an attack against specialization, but it is an assertion that we are in a condition like that of a world war, which requires something that Martin Luther King and others have often talked about—creative, nonviolent directed action, but in the field of health. And we need volunteers, just as the American civil rights movement had volunteers. They will be the backbone of this effort. In this case, we need to establish brigades and battalions of courageous young people, who may even risk their lives, but in a responsible way, to save the lives of others, both here and in other countries.

This is not, by any means, completely new. Many nations have tried elements of such programs, which have worked relatively successfully in the past; and members of the African Union, and the World Health Organization, are well aware of these measures. This, however, is a circumstance that requires the equivalent of a wartime alliance, but this is truly a wartime alliance for progress. Here we can count successes, not in the numbers of enemies killed through combat, but through the numbers of lives saved through healthcare. We will also be aided by the omnipresence of certain social media capabilities that can provide means of close coordination that would otherwise be unavailable.

The Fight Must Have a Human Face

The fight against this virus must have a human face. There is no section of our population we can afford to ignore. For example, our already-overcrowded, and often abusive prisons, will see an explosion of infections. Should such people who have been accused of a theft or other non-violent crime, or anyone else, for that matter, be given a de facto death sentence, or be put in harm’s way, solely because the rest of us have decided to forget who they are? What about the families that visit them? What about the children, or spouses, or parents attached to these people? And I believe that this can be a mobilization that replaces the image of young people as a problem, or a potential source of unrest, with the image that they are the healers, those dedicated to preserving life, not destroying it.

There may be more than two million American young men currently held in prisons for non-violent offenses who could be more than willing to become part of this solution, to help bring health both in their communities here, as well as to other nations. And it is only in such an emergency as this, that this sort of bold thinking would be attached to an urgent, dire, but resolvable crisis.

I pray that this moment may find us equal to this challenge to our normal way of thinking. All the world is at stake, and all the world is in need. Thank you.