PANEL 1Instead of Geopolitics: The Principles of Statecraft 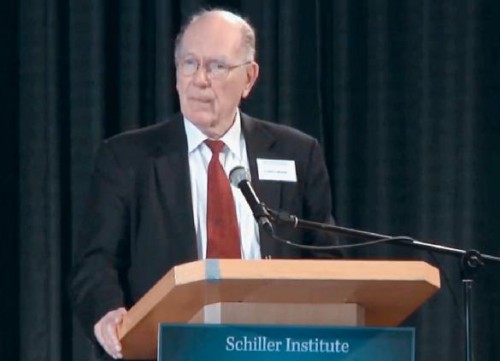 The conference opened with a video clip from the speech, “Creativity as Such,” delivered by the late economist and statesman Lyndon LaRouche to a Schiller Institute conference in Germany in July, 2011.

Lyndon LaRouche: This is truly the most important of all strategic questions we have to face today: the fact that the human species is absolutely unique in its capabilities. There’s no other known species in the universe, ever known to have existed, or could exist—even though we have not fully explored, of course, the Crab Nebula or similar parts of the great galaxy which we’re involved in, called the Milky Way. There may be many species with cognitive powers out there. Because the Solar System of which we are immediately a product, although always under the control of the galactic processes—and we know a good deal, today, about those kinds of things: Our organization in the United States has spent a good deal of effort on concentrating, inclusively, on just this question: How old is life? How long has life existed in this galaxy, or within some place in it? What is the nature of mankind, who’s been on this planet only for a few million years? There was no human being on this planet, to the best of our knowledge, until a few million years ago.

And yet, we’re talking about billions of years of this galaxy, during which all living processes known to us have come into existence. And all life is creative, but there’s a sad part: that over 95% of all known living species have been rendered extinct, as failures, in their time. The question, therefore: Why, in these times, when we have entered a period in which there will be more great kills of living processes, at this phase of the movement of the Solar System through the galaxy, why should we be so presumptuous as to imagine that human life is not about to disappear as the dinosaurs did in the last great kill?

What is there about human beings that says they’re not just another animal species, ready to get to the chop in the course of their time?

The answer is a very little-known question. Most people don’t have an inkling of what the answer is! As a matter of fact, our societies are run on the basis of people who have no inkling what the human species is! All they can come up with is an explanation of some kind of an animal, with animal characteristics of pleasure and pain, and things like that, that might control the behavior of this animal.

So why should we expect that we have a right to claim that the human species is going to survive the approaching point of a great kill in the course of the movements of the Solar System up and below and around the galaxy we inhabit? How do we know that this 62-million-year cycle is not going to take the human species away, as it’s taken so many away before? And then, before that, and then before that?

What is there in us, that is not in other living species known to us? That might, somehow, miraculously, pronounce a destiny for our human species which we grant to no other living species? The name for that specific quality, which we know in the human species, which does not exist in any other known living species: There’s a quality of creativity, which is absolutely unique to mankind. And if you’re not creative, and if you don’t understand creativity, you haven’t got a ticket to survival yet! Because creativity won’t save you, unless you use it. [end video] 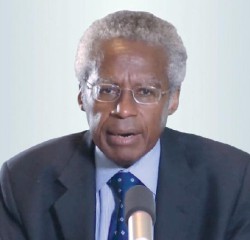 Dennis Speed: Before we go to our keynote speaker, Helga Zepp-LaRouche, let me say a few things about the Schiller Institute and what we’ve been doing with this process of conferences, which began back in April of this year. On April 25th and 26th, we held the first of now, three conferences. These conferences were devoted to the idea of the creation of a Four-Power summit—Russia, China, India, and the United States. There are various processes that have been able to move in that direction already, and we are in such a process today. In fact, among many of the things we’ll be talking about today is a new proposal that has been put forward by President Vladimir Putin of Russia to that effect.

Let me also say that for people in the United States, in particular, the crisis that has been on people’s minds as exhibited in the social and political crises in the streets of America, is merely one predicate of a broader international process. And that’s why we’re starting today with this first panel, to give that broader overview, and to allow you and others to become part of an international operation to reverse those circumstances.

Let me say one other thing concerning the words you just heard from Lyndon LaRouche, from 2011. LaRouche’s conception concerning the idea of thinking about strategy from the standpoint of a galactic process, and then looking—and only then—at the various political episodes occurring on Earth, was a way of trying to actually look at what he often also referred to as intelligence. He was the founder in 1974, of Executive Intelligence Review.That publication, which is still published to this day, specializes in trying to make his method of intelligence and investigation available generally in American and all international analysis.

This was very successful, in particular, in the drive for certain policy changes that occurred in the United States; most notably, that of March 23, 1983, with the creation of the Strategic Defense Initiative, the product of a process of negotiation that LaRouche carried out as a back-channel negotiator with the then Soviet Union, and with the knowledge of the National Security Council and then President of the United States, Ronald Reagan. That policy, and the creation of that policy, and that dialogue with the then Soviet Union, is, in one sense, while not a model for now, it is the same sort of process that must needs be allowed to continue and happen between President Donald Trump, President Vladimir Putin, President Xi Jinping, and Prime Minister Narendra Modi, among others. The idea of the Four-Power summit is not exclusionary. It doesn’t say that other powers are not to be involved. In fact, recent proposals have amplified or expanded the number of nations that might, in fact, be involved.

For example, looking at today’s United States, the issue is our having gone away from being a productive culture, in fact the most productive economy in the world’s history, between the period of the 1933 resurgence of America that occurred under Franklin Roosevelt, through 1945, and then the subsequent period of 1945 through 1971 with the Bretton Woods system. It’s been the need to return to that, and to return to those ideas that had come into currency under Franklin Roosevelt’s Presidency—that is the template for what we are saying should be the character of discussion between President Trump, President Putin, President Xi, and Prime Minister Modi.

I want to make one thing clear to everyone as we are about to transition to the keynote. In thinking about what we are all involved in today—namely, that given the global pandemic condition created by the coronavirus, clearly, there is a need for all of us to change our axioms. International cooperation among sovereign, independent nation-states is necessary, for the purpose of creating a worldwide alternative to what’s otherwise going to be, perhaps, the destruction of civilization—not because absolutely everybody would die of the coronavirus or something like that. But the cascading effects and the interconnected effects of this global pandemic condition that we don’t really medically understand, plus the ongoing problem of the financial virus that has plagued humanity particularly since the time of the collapse of the Bretton Woods system, this combination has created a circumstance in which only with all nations working together, can we possibly achieve an actual reconciliation of this process.

We will now hear from Helga Zepp-LaRouche. She is the founder of the Schiller Institute—that was back in 1984. She is the wife of the late economist and statesman Lyndon LaRouche, who passed away in February 2019. She played a crucial, decisive role in a set of conversations and dialogues with the government of China during the period of 1993 to 1996, launching the process that became what we now know as the New Silk Road.