The Fundamentals of East-West Philosophic Relations 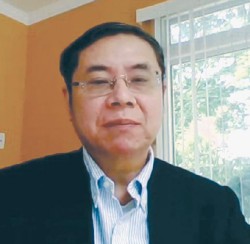 Dr. Jin is the Executive Director for China, at the IMF (Washington, D.C.). He gave this presentation to the Schiller Institute International Conference, on June 27, 2020, “Will Humanity Prosper, or Perish? The Future Demands a Four-Power Summit Now,” on Panel 1: “Instead of Geopolitics: The Principles of Statecraft.” This is an edited transcript of that speech.

I would like to thank Schiller Institute for the invitation to attend this important conference. And also thank Madame Helga for her excellent keynote speech.

The year 2020 is a very special and challenging year. The trade war, the eruption and spread of the coronavirus, the riots in the U.S., world economic recession, and escalated geopolitical tensions, I just name a few major ones. Global growth is projected by the IMF at negative 4.9 percent this year.

In the following discussion, some of my observations and comments are kind of thought in research and of academic by nature, I will speak in my personal capacity only.

Global challenge should be handled globally with a multilateral approach. No country will be safe until every country is safe.

When we start to discuss the multilateral approach in dealing with the pandemic and the global crisis, I recognize that there is a debate on the value of multilateralism and multilateral institutions. Some people are talking about economic decoupling, a cold war, and even a conflict of civilizations. Since I am Chinese, I ask myself: Is there any fundamental conflict between civilizations in the East and West?

China Is not Fundamentally Different from the West

Chinese civilization is unique in many aspects, but is not fundamentally different from Western civilization. One example: In the 6th century B.C., China had the Taiji or Yin-Yang concept (the co-evolution of two opposite forces). I was surprised to discover that this was also a core concept in physiological theory in Greek medicine in the same period of time. Another example: A core concept of Confucianism is the “middle course approach,” which also corresponds to the “doctrine of the mean” that was explored extensively by Hippocrates, Plato, and Aristotle in ancient Greece.

In sixteenth century, the brilliant Jesuit missionary, Matteo Ricci, recognized the striking parallels in Confucius and Mencius to the Christian concept of man in the image of God and devoted his life to building an “ecumenical alliance” between China and the West.

During the evolution of trade tension between the USA and China, some opinions expressed in the media have demonized China as an evil trade partner that is systematically engaged in illegal subsidizing, cheating, and stealing. That reminds me of the overwhelming public opinion in the media against Jewish people in some parts of Europe before World War II. The truth is that after more than 40 years of market-oriented reform and opening-up, China has already been transformed into a market-based economy. In fact, the share of fiscal resources in GDP mobilized by some European governments is higher than that in China due to extensive social welfare arrangement, but nobody in Europe complains that this welfare has distorted the market.

China has a profound tradition of market economy both in theory and practice. In the 6th century B.C., Laozi, a famous philosopher, and the founder of Daoism, advised his government to “rule without intervention,” which is an ancient version of the invisible hand of Adam Smith. Another famous economist and philosopher Guanzi, in the 7th century B.C., suggested that in the years of economic depression, government could increase expenditure to implement seemingly wasteful projects for the purpose of creating employment. That is the ancient Chinese version of Keynesian economics. Financially, China was also highly developed. As early as in 11th century, China introduced the first official paper currency in the world.

Decoupling the U.S. from China Is Not a Good Idea

On the issue of economic and technology decoupling, the attempt to block a major people and civilization from competing fairly with other countries and getting access to new scientific and technological knowledge is morally wrong and will help China to win sympathy around the world.

Compared with other multi-country free trade zones, China has already become the largest single-country retail market by itself. It is more than equivalent to a free trade zone with a highly integrated infrastructure network, centralized fiscal and monetary policy, and a deep and liquid labor and capital market. The authorities have also determined to further open its economy, greatly enhance intellectual property protection, and implement structural reforms, including introducing competitive neutrality for State-Owned Enterprises. In the end, it is the effectiveness and efficiency of China’s domestic resource allocation that will determine China’s international competitiveness.

I am not a specialist in geopolitics. But I have learned that the scenario of decoupling and a new cold war is based on an old strategy called “divide and conquer,” or “offshore balance.” It is very smart from the offshore players’ perspective. But it will benefit the offshore manipulator at the expense of onshore neighbors. I wonder whether those equally smart onshore players are willing to buy this, and how high a price the offshore player wants to pay to convince so many countries to engage in long-term conflict with their major trade partner.

Relations with India, Japan, Russia, and the U.S.

It is not objective to exaggerate China’s conflict with India at the border. It is important to recognize that the current border is largely a stable equilibrium. The common interest of these two ancient civilizations is to cooperate and develop their economies and achieve a joint historical revival. The two countries should benefit from their common culture heritage based on centuries of peaceful and friendly cultural exchanges, particularly the exchanges in the form of Buddhism.

The historic issue between China and Japan often looks deadlocked, but a forward-looking approach is the key. China has largely recovered its self-confidence, and it is very clear that China’s revival does not mean revenge. When new generations from China visit Japan as tourists, most of them feel they like Japan. Japan is China’s only neighboring country that has maintained a lot of Chinese characters in their written language, and they use chopsticks, eat rice, use soy sauce, and practice calligraphy—all of which are typical reflections of East Asian culture.

A healthy and stable Sino-Russian relationship can be much more sustainable than many people imagine. Their stable cooperative relationship can be attributed to many factors. It is not coincidental that their combined territory maps the historical Mongol Empire. Toward the end of last century, China and Russian leaders reached a wise and visionary agreement to delimit and confirm their common border. Their mutual respect and support for the core interests of each other can go a long way.

The biggest loss the USA could incur from decoupling and a new cold war is that many of the 1.4 billion Chinese people, who are otherwise very friendly toward America, could turn into opponents. By contrast, a friendly and cooperative China will definitely be America’s greatest fortune in Asia.

The Positive Role of the IMF and China

I believe constructive competition and cooperation between China, the USA and other countries under a rules-based multilateral system should be the right choice. Fortunately, the International Monetary Fund (IMF) is still functioning normally and has played a constructive leading role, which is also supported by the World Bank and other Multilateral Development Banks (MDBs).

In just a few months, the IMF has implemented debt relief to more than 27 countries, supported by contributions from a group of better resourced members. The Fund has augmented its lending instrument to low-income countries by more than SDR10 billion, and has approved Emergency Financing by Region (EFRs) and a Rapid Credit Facility (RCF), along with Rapid Financing Instruments (RFIs) worth SDR47 billion for more than 74 countries. It has created a new Short-term Liquidity Line (SLL), and is pushing for approval of New Arrangements to Borrow (NABs) of SDR365 billion, and is preparing for a new round of Bilateral Borrowing Agreements (BBAs) of SDR138 billion. China has actively participated in all the above efforts and has made its own contributions.

The Fund and the World Bank jointly proposed a Debt Service Suspension Initiative that has been endorsed by the G20. China has further called for an extension of this initiative to 2021. A fair burden-sharing and full participation of all creditors is critical for a successful implementation of this Initiative.

China has made additional efforts outside the multilateral framework, including (1) Making $2 billion in assistance grants to most affected countries, especially developing countries to combat COVID-19 and recover social and economic development. (2) Establishing a Sino-Africa hospital cooperation program covering thirty hospitals in Africa. China has recently sent five emergency professional medical teams to Africa, in addition to the existing 46 Chinese medical teams already there. (3) In addition to implementing the G20 debt moratorium initiative, China will provide more assistance to countries that have been most heavily affected, together with other stake holders. (4) China has promised that once it completes the development and testing of its own vaccine, it will provide it to developing countries as global public goods. (5) China will establish a comprehensive storage and transportation hub to support global medical supply, under the direction of the United Nations.

The merit of multilateral assistance is that it is rules-based, approved by a collective board representing all its member countries, and the recipient countries are facing a multilateral institution, rather than a particular country or group of countries. Therefore it can reduce, although not eliminate, geopolitical sensitivity. Although there are different views on many different issues, and even bilateral tensions between some member countries, the majority of the Fund’s membership has been able to find common ground on many issues.

The Bretton Woods institutions could do two more things in my view.

First, a general allocation of the Special Drawing Rights (SDRs) that will increase the supply of international reserve assets, reduce the burden of any single country to supply its reserve currency excessively, and provide low-income countries necessary resources to alleviate their debt distress.

Second, the MDBs should greatly expand their lending to include not only developing countries, but also developed countries, including the United States itself. That will fully utilize the low interest rate environment, greatly stimulate global demand, and pull up growth rate in receiving countries.

In conclusion, I wish the post COVID-19 world will be a more cooperative and peaceful one.