The Epidemic Demonstrates That Humanity is a Community of Common Destiny 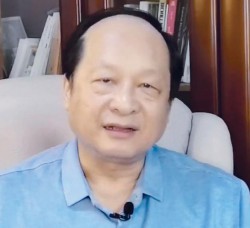 Dr. Ding is Deputy Director, Research Institute of World Development, China Development Research Center, China. He gave this presentation to the Schiller Institute International Conference, on June 27, 2020, “Will Humanity Prosper, or Perish? The Future Demands a Four-Power Summit Now,” on Panel 1: “Instead of Geopolitics: The Principles of Statecraft.” This is an edited transcript of that speech.

The COVID-19 pandemic has caught the whole world by surprise. Not only has the economy been paralyzed, and human life threatened, but people’s living habits have also changed. Moreover, in many countries, people have not been able to effectively curb the spread of the virus because they have no experience. Although many institutions are trying to produce vaccines, I am afraid that the vaccine would be short-lived, because the virus evolves so quickly.

In the face of the epidemic, we humans are very vulnerable. If we are not united and do not work together to overcome the epidemic, the time for the virus to spread will prolong, and the longer we will suffer.

First, when China’s epidemic broke out, many countries helped China, providing China with various materials to prevent and combat the virus, including masks. Countries such as Japan chose phrases from ancient Chinese classics and wrote those on boxes for transporting materials to show the close relationship between East Asian countries. When the epidemic situation in China was brought under control and the situation intensified in Japan and South Korea, China sent a large amount of materials to Japan and South Korea to help the people there fight the epidemic.

Second, many such touching stories can also be told about cooperation between Chinese and American companies in combating the virus. When the epidemic situation in the United States worsened, many Chinese companies provided the United States with a large amount of materials, including masks, protective clothing, protective glasses, ventilators, and even reagents for nucleic acid detection. So that cooperation showed that our human society is really a community of common destiny.

My third point is that unfortunately, the political chaos and the political split in the United States has intentionally made China a scapegoat. Radical congressmen and senators have tried to compete with the hawks in the Trump administration to show their toughness toward China. This attitude cannot help Americans combat the epidemic, but only exacerbates the mistrust between China and the United States, even making most cooperation impossible between the Chinese and American governments during and after the epidemic.

Fourth is the fact that the world economy has not completely recovered from the last financial crisis begun in 2007. And then a new crisis happened. The pandemic may make this crisis deeper and more difficult to deal with, because we are faced with a dilemma: restoring the economy and preventing the virus from spreading. The largest economies in the world need to expand cooperation and jointly take measures to combat the virus and to boost economic growth. We have to use “stimulus packages” not only to alleviate the problems of the population in trouble, but also use such stimulus packages to invest in infrastructure. Not only in traditional infrastructure such as highways, bridges, and communications, but also in the development of new infrastructure, such as the means of mass prevention of epidemics and mass treatment during a pandemic, also including remote means for mass temperature checks of people.

Only by rebuilding trust among the big powers can we unite together to successfully fight the coronavirus. Then we can bring humanity back to a harmonious development path again. So, I think we have to unite our forces, our strengths, in the middle of the fight against the coronavirus pandemic. And then we could try to find a way of common development after the pandemic. Thank you.