This transcript appears in the July 10, 2020 issue of Executive Intelligence Review. 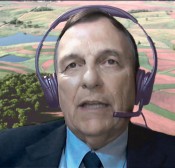 This presentation was given to the Schiller Institute International Conference of June 27, 2020, “Will Humanity Prosper, or Perish? The Future Demands a Four-Power Summit Now,” on Panel 2: “Why a 1.5 billion Productive Jobs Program Can End War, Famine, Poverty, and Disease.” This is an edited transcript of that speech.

Look at the state of farming and food in the world, and you see huge disruptions. Just one little microbe—the new coronavirus, coming on top of the system already in breakdown, has led to terrible things.

There is a disaster in the meat industry. The mega-global, cartelized packing houses from Australia to Germany to the Americas, are in a breakdown crisis, as workers are sick and living in poor conditions. Masses of meat animals are stranded. And the farmers were hit hard as they’re forced to kill their own livestock.

There is a disaster in fruits and vegetables. Thousands of workers, who travel between countries, and work in hard and poor conditions in fields and orchards, are sick, from California, to Spain and the Middle East. It’s so bad, Doctors Without Borders (Médecins Sans Frontières) went into Florida last month, to care for thousands of poor farmworkers who had nowhere to turn. In Canada, 60,000 such workers—one-half of them from Mexico—are getting hit, and with the sickness hitting so many Mexican workers in Canada, Mexico’s government suspended travel this week, until something can be worked out.

There is a disaster in the staff of life—wheat, corn, rice. It is—fortunately—not because of a bad crop failure somewhere, except for the locusts in Africa and South Asia, but because we are growing far too little grain. Period.

Lyndon LaRouche would say that the way to think of how much food the world needs, is to start from 24 bushels of total grains per person a year. What that would mean is, we should be having a world harvest of 5 billion tons of all kinds of grains together. Currently, the world is growing less than 3 billion tons. And that would mean enough for direct eating as bread, noodles, tortillas—whatever you like, and milk, meat, eggs and so on. Plus, another 25% for reserves, which now, because of the World Trade Organization, does not exist.

In Biblical terms, it’s seven lean years and seven fat years. We should have strategic storage reserves, we should have silos and warehouses all over the world, of grain, cheese, butter, sugar and other basics. Stockpiles in case of storms, epidemics, fires, locusts. We must double food production.

Instead, we’ve had decades of what should be called a “famine policy.” The City of London/Wall Street circles have cartelized the farm-food chain so extremely, so they can “harvest money.” Yes: harvest money. They decide where and how anything is produced, and who gets to eat or not. They rip off the farmers with prices below the cost of production and make record profits from the consumer by jacking up the retail price. And that is how you cause hunger for millions throughout the world.

No wonder we are vulnerable to locusts and diseases. The locusts in South Asia and East Africa are now heading westward. By August they may reach Mauritania on the Atlantic coast of Africa. This must be stopped. A fellow speaker today, from the Kansas-Colorado area, will be talking more about the physical conditions connected with just “harvesting money” instead of food. And we will soon hear from the Mexican grain belt.

How did we get this way? It is not because we had no alternatives. We are in the age of the astronaut farmer. We can produce food for all. And it wasn’t like we were all given a pill to make us dumb—except for what comes from the entertainment and news media: communication monopolies.

We are all played off against each other, and that must stop. Farmer vs. city people. Nation vs. nation. There is all the talk about “competition” in world food trade. And about having a “level playing field.” It’s all bunk! It’s not a game. It’s not a playing field. It’s food. It’s the means to life! And farmers are on the streets again in Germany with tractorcades for the right to grow food!

In conclusion, I think of President Abraham Lincoln in the 1860s, when the whole United States nation was played off against itself. In fact, the British sent in forces to help bust up the new nation. Still, during the Civil War and a great depression, in only a year, Lincoln and others implemented measures for science and hope. They created science-based farm colleges (the Land Grant system), settled the entire Midwest with the Homestead Act, crossed the country with a new railroad and corridors of development, and issued a new form of credit called the Greenbacks.