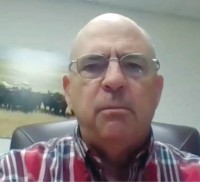 Michael Callicrate is a rancher and a board member of the Organization for Competitive Markets. He gave this presentation to the Schiller Institute International Conference on June 27, 2020, “Will Humanity Prosper, or Perish? The Future Demands a Four-Power Summit Now,” on Panel 2: “Why a 1.5 billion Productive Jobs Program Can End War, Famine, Poverty, and Disease.” This is an edited transcript of that speech.

I’m in Colorado Springs, Colorado. I have a company called Ranch Foods Direct. I also produce livestock on my operation in northwest Kansas, which I’ve done for the last 45 years. But my focus has really been to try to build an alternative food system to the industrial one that we have now. 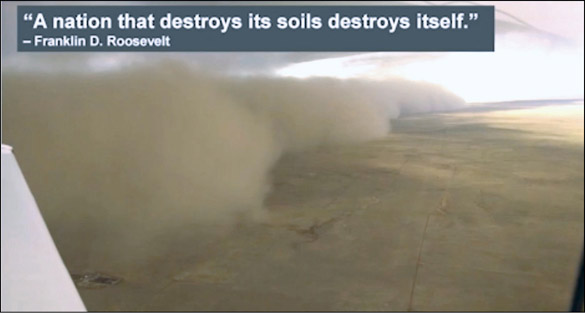 Courtesy of Michel Callicrate
The dirt cloud of Dec. 24, 2013, over a mile high and 4 miles across, extended from Colorado Springs to the Kansas border.

When I’m asked the question, “Prosper or perish?” it makes me think of David Montgomery’s book Dirt. In his book, David Montgomery talks about the erosion of civilizations and the importance of soil. Without soil, we basically don’t have life. So, I’m going to kind of come at this question of “Will humanity prosper, or perish?” from that perspective, because I think soil is critical to our survival as human beings. The impoverishment and nourishment of a civilization is directly connected with the consolidation and industrialization of the food supply. Concentration of power and wealth is the greatest threat to any free society. Rather than creating new wealth from healthy soil, the current system is mining and destroying our land for the short-term benefit of a few global corporations.

On December 24, 2013, Christmas Eve, there was a dirt cloud that extended 200 miles from Colorado Springs to the Kansas border. It was 12,500 feet high above sea level to the top, 4 miles across, moving at 50 miles per hour. This is soil; this is the blowing away, the destruction of civilization currently. Much of eastern Colorado’s topsoil is already gone. I fly back and forth between my rural community of St. Francis, Kansas and the urban center of Colorado Springs, where we market our meats that we produce. This is what you see across the eastern plains of Colorado, is the mining of these soils, the withering away of that topsoil. Previously, when it had fertility, it grew healthy plants that fed livestock, which in turn became food for human consumption.

We’re mining our water resources. HBO’s “Vice” did a documentary called Meathooked and the End of Water, that talked about the global water supply being consumed and used up. This is another indication that humanity is going to perish if we don’t change our ways. We’re pumping the precious fossil water from the Ogallala Aquifer, just to name one of many around the world that is being pumped dry for the benefit of industrial agriculture. Again, an example of a mining operation. 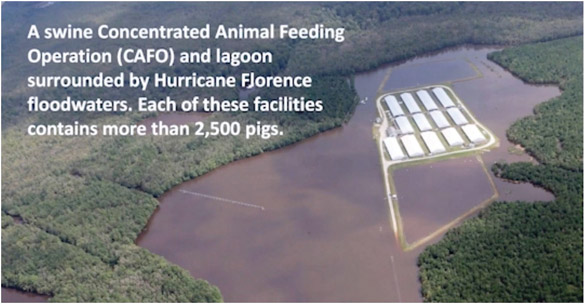 Put an End to Looting

Think about being an animal in one of these facilities, inside one of these barns. Again, in Hurricane Florence, we flooded the factory farm facilities, and rather than let these animals out, they sort of learned their lesson. They kept the animals in the barn, where they starved and consumed one another before they died. We’ve got a total disregard of animals, which is another indication of a failing system in a failing society. St. Francis of Assisi said, “If you have men who will exclude any of God’s creatures from the shelter of compassion and pity, you will have men who will deal likewise with their fellow men.” Which is certainly what we’re seeing today.

This global cartel, controlled food system, rather than nourish the people who sustain it, consumes them. The result is a food system that concentrates money and power at the top, and poverty at the bottom, while compromising food access, quality, and safety in the process.

That’s a quote from Albert Krebs, editor and publisher of Agribusiness Examiner. 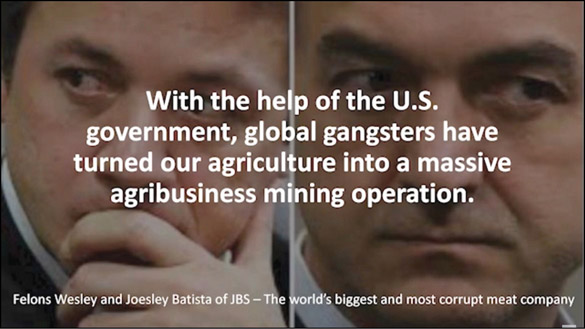 With the help of the U.S. government, global gangsters have turned our agriculture into a massive agribusiness mining operation. Meet felons Wesley and Joesley Batista of JBS, who have been in prison, and have recently—because they’re considered essential—been invited back to run the biggest meat company in the world, JBS. JBS is headquartered in Greeley, Colorado, and has been part of the four big meatpackers now under investigation for lowering prices to livestock producers at the same time they’re raising prices to consumers. These men should not be involved in anything to do with a critical industry, especially food; but our government allows them to operate.

Allan Savory I thought put it well. He said, “We have more to fear from USDA than any foreign power.” USDA refuses to enforce the Packers and Stockyard Act, which would have prevented the shared monopoly that the Batista brothers hold with Tyson, Cargill, and Marfrig (another Brazilian company). USDA makes life for small plants extremely difficult; making it impossible for them to operate, and giving the advantage to the biggest meat plants that have now failed us in this COVID-19 outbreak. 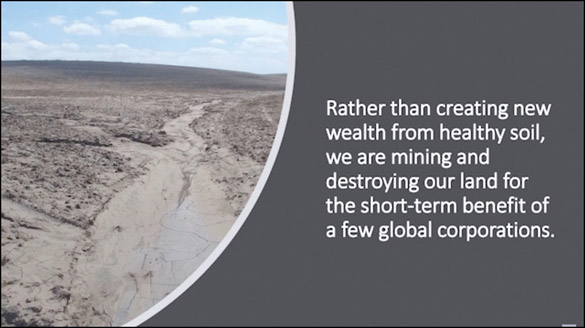 The industrial food system did fail the COVID-19 test. It has no resiliency. It has extracted,— it does not create and build well, it extracts well. It destroys our very mechanisms that we create wealth from, that is, the soil. In my store in Colorado Springs, on the same day—March 13, 2020—that my store was fully stocked, at the big box stores in Colorado Springs, shelves were completely empty; no meat was available. In my store, which is about a 200-mile supply chain from St. Francis, Kansas to Colorado Springs, Colorado, you see full shelves. So far, our supply chain has held up well. We don’t stack employees on top of each other; we remain healthy in our operation. 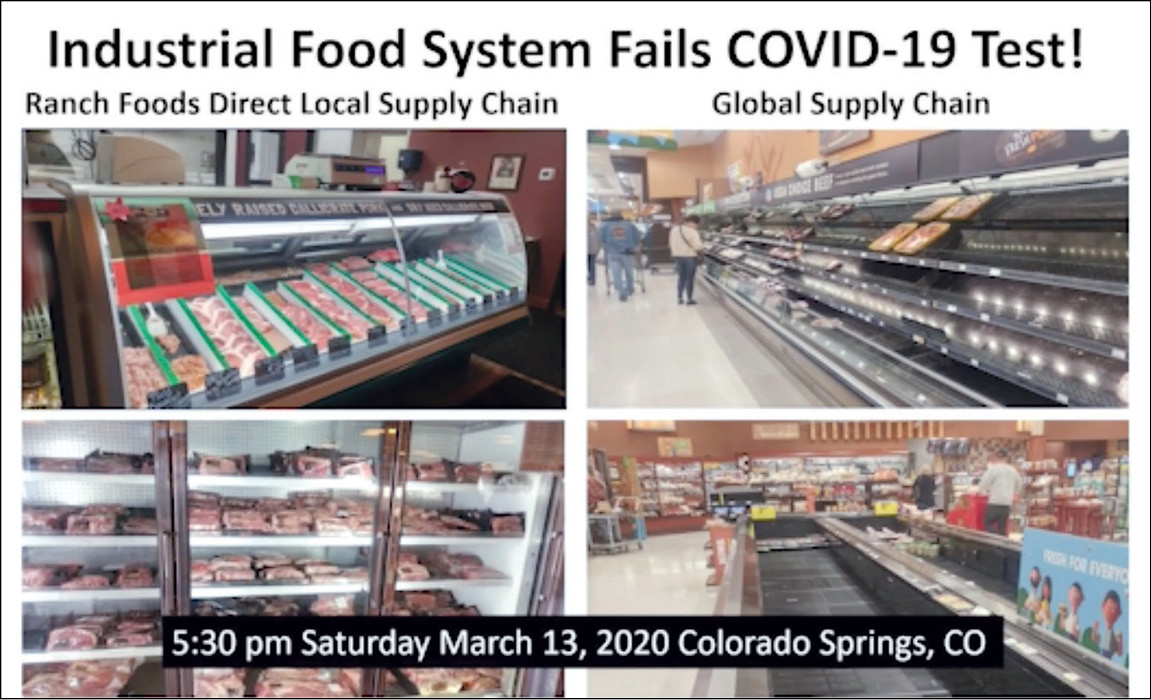 So, let’s look at what I think we ought to be doing. I think we ought to be returning to a regenerative farming and ranching operation. One that’s made sustainable because it’s supported by consumers who care about the soil, who care about communities and people and the environment in general. So, I’ve set up what I call the Callicrate Cattle Company Regenerative Farming and Ranching concept. Basically it’s a circular economy—not a linear economy that extracts. It’s a circular economy that puts back into the soil, into the community, into the people. So, we start with the soil, and we return to the soil. Critical to this concept working is our ability to access a marketplace that demands what we produce. 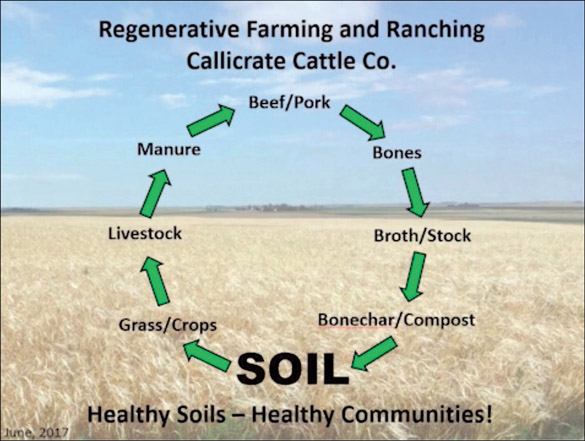 —Wendell Berry, The Unsettling of America: Culture and Agriculture

Creating community around local food will be essential in supporting this new regenerative approach to agriculture and food systems, where family farmers, ranchers, and small businesses can prosper, and consumers can have access to safe, dependable, and healthy food.